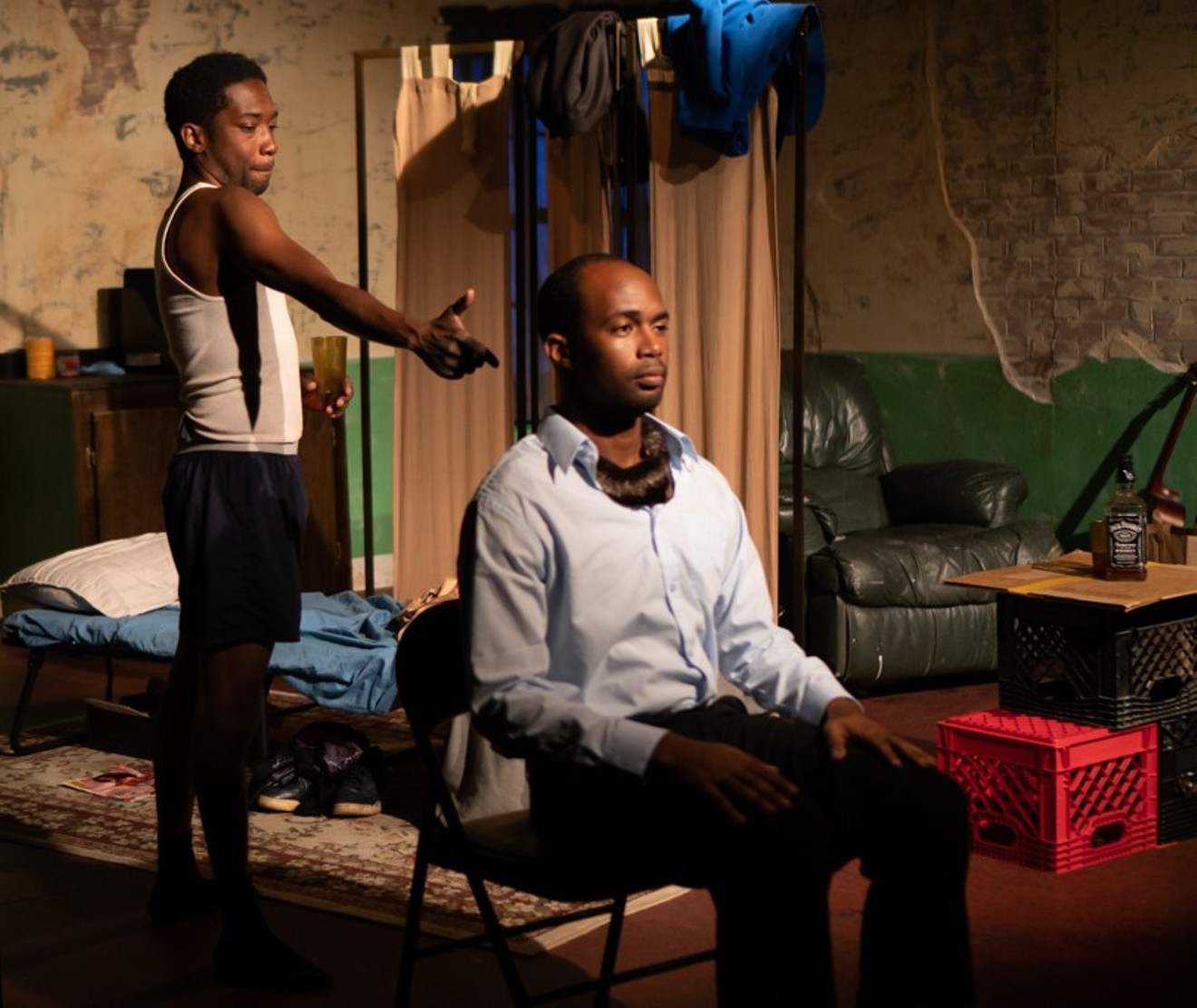 Roderick Randle as Booth and Denzel McCausland as his brother Lincoln in Topdog/Underdog at Main Street Playhouse. Photo by Olimac Media
The 20th-anniversary production of Topdog/Underdog began previews on Broadway on September 27 for an October 20 opening. TV and movie actors – Corey Hawkins and Yahya Abdul-Mateen II – will play brothers Lincoln and Booth in the revival directed by Tony Award winner Kenny Leon.

Still, you don’t need to travel nearly that far to see a production of the searing, Pulitzer Prize-winning drama by Suzan-Lori Parks.

Main Street Players in Miami Lakes obtained the rights to do the play before the pandemic hit, and the company has finally opened its own production, which will end a few days before the official Broadway opening. (Palm Beach Dramaworks will do a regional production of the show May 26-June 11.)

Staged by director-actor-playwright Carey Brianna Hart, Topdog/Underdog is, obviously, a far more intimate experience at the 50-seat Main Street Playhouse than it will be for audiences in Broadway’s 805-seat John Golden Theatre. Though the play is laced with laughs, particularly in earlier scenes, it is also intense, quicksilver in its mood shifts, and ultimately tragic. Being so close to the actors feeds into the play’s aura of danger. At times, you may find yourself shrinking back in your seat or experiencing a touch of claustrophobia.

The play about two Black brothers in their 30s — the elder Lincoln (Denzel McCausland) and five-years-younger Booth (Roderick Randle) — takes place “here” and “now,” or so the program says, though the vibe feels like the bad ol’ days before the push to clean up Manhattan’s Times Square. 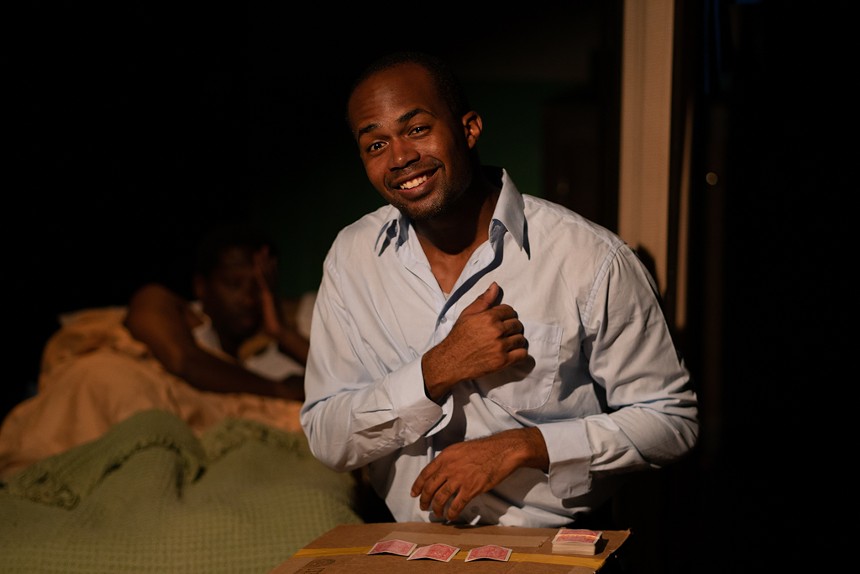 Denzel McCausland as Lincoln (right) recalls happier days in Topdog/Underdog.
Photo by Olimac Media
Naming the brothers for the 16th president and his actor-assassin was, Lincoln tells Booth, their father’s idea of a joke. The current situation for the siblings, as iffy as their entire lives have been, is that they share Booth’s single dilapidated room with no running water and no toilet.

Lincoln leaves every day for a job at an arcade, donning whiteface makeup, a stovepipe hat, and a fake beard to play his presidential namesake. As he pretends to watch Our American Cousin at an imaginary Ford’s Theatre, tourists line up to “shoot” him with blanks — again and again and again. It is, he says, “sit down... easy work.”

Time was, Lincoln was the OG of Three-card Monte, a slick con man with hypnotic patter and dizzyingly fast hands. Then Lonny, his right-hand man, was murdered in front of him. Lincoln kept boozing and womanizing ‘til his wife Cookie threw him out. Hence the arcade job and the “temporary” living arrangement, just one source of Booth’s endless stream of complaints.

The volatile, insecure Booth has dreams of following in his brother’s hustler footsteps and rechristens himself “3-Card.” Truth be told, he has no gift for the grift. Lincoln, who chuckles as he masterfully puts baby bro in his place, says Booth has two left hands. Slow ones.

When it comes to shoplifting, on the other hand, no one boosts like Booth. In the play’s funniest scene, he brings home two fully accessorized outfits — and not in shopping bags.

Topdog/Underdog is a Cain and Abel story about brothers forever scarred by the warring, cheating parents who abandoned them when Lincoln was 16 and Booth 11. Both are damaged, barely getting by, anxious. But Booth — loud and angry, sick of living in his brother’s shadow, tired of being put off by his ex-girlfriend Grace — is ready to blow like a volcano.

Roderick Randle as Booth and Denzel McCausland as his brother Lincoln in Topdog/Underdog
Photo by Olimac Media
As shaped by Hart and the actors, the performances and thus the brothers are quite different.

McCausland’s Lincoln is a more low-key, weary man whose unexplored talents (he sings beautifully, for example) were overshadowed by the need to hustle and protect his little brother from one day to the next. The actor’s work deepens as the play moves toward its inevitable end, with a kind of emotional blindness that keeps Lincoln from fully grasping just how dangerous his brother can be.

Randle’s Booth is a fuse just waiting to be lit. Lying is like breathing to him, no matter the subject. His sexual prowess, his swagger, his Three-card Monte skills are all fodder for his delusions, envy, and deadly jealousy. Randle is a ball of energy from the get-go, yet he still builds to the ferocity and heartbreak of the final scene.

The show’s designers get the essence of the brothers’ world just right, from Danny Nieves’ shudder-inducing set and Kat Svadbik’s props (including Lincoln’s “bed,” a broken green recliner with rips and paint dribbles on it) to Angie Esposito’s costumes and Alejandro Milian’s lighting. 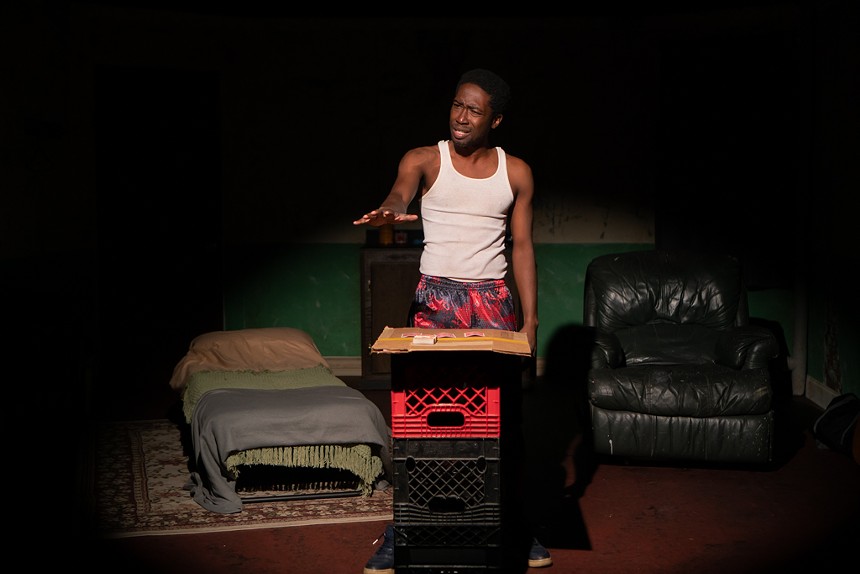 Roderick Randle as Booth tries to summon some of his brother's prowess with the cards in Topdog/Underdog.
Photo by Olimac Media
One quibble with the sound, which was done by Nieves and Hart: In two places, to fill time for costume changes, noisy traffic sounds get loud, then disappear. Sure, you can’t have that city cacophony going all the time if you want to hear the actors. But either there’s traffic outside the place they live or there isn’t; real noise doesn’t turn on and off like a faucet.

Though Topdog/Underdog won its Pulitzer two decades ago, this masterwork about the love-hate relationship between these broken brothers is as penetrating, insightful and disturbing as it was when Parks wrote it. Some of the language is vulgar and quite raw, some poetic (Booth calls Lincoln’s reminiscing his “raggedy recollections”), some revelatory.

Times change, but the crushing effects of prejudice, poverty, and familial dysfunction endure, as does the American obsession with winning and losing.

Great plays endure too, giving theaters of all sizes and a younger generation of artists the chance to interpret a contemporary classic. With Topdog/Underdog and the singular voice of Suzan-Lori Parks, Main Street Players is taking its audiences on a profoundly emotional, thought-provoking ride.

Topdog/Underdog. 8 p.m. Friday through Saturday and 2 p.m. Sunday through October 16, at Main Street Playhouse, 6812 Main St., Miami Lakes; 305-558-3737; mainstreetplayers.com. Tickets cost $30.
KEEP MIAMI NEW TIMES FREE... Since we started Miami New Times, it has been defined as the free, independent voice of Miami, and we'd like to keep it that way. With local media under siege, it's more important than ever for us to rally support behind funding our local journalism. You can help by participating in our "I Support" program, allowing us to keep offering readers access to our incisive coverage of local news, food and culture with no paywalls.
Make a one-time donation today for as little as $1.
ArtburstMiami.com is a nonprofit source of theater, dance, visual arts, music, and performing arts news.