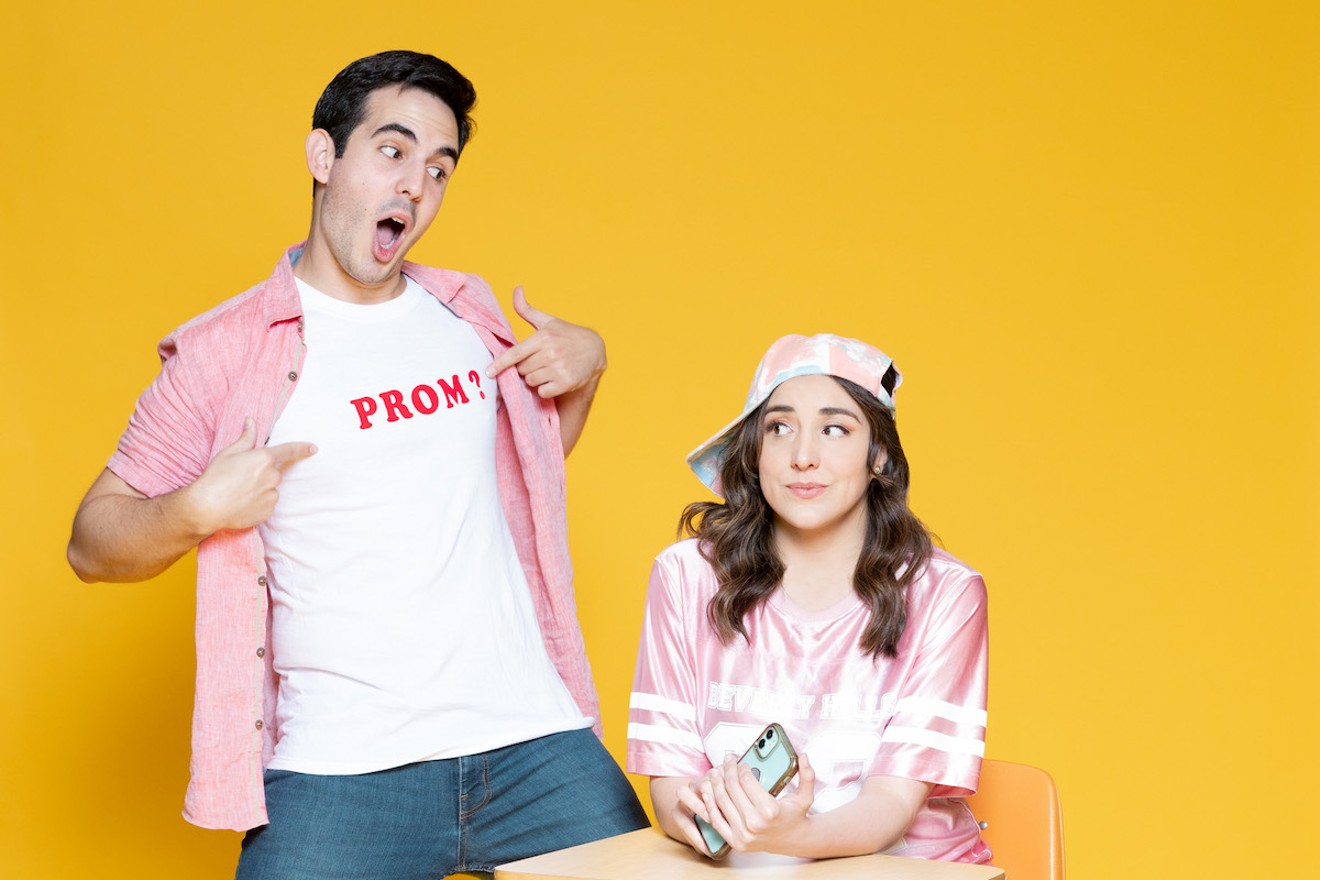 Daniel Llaca and Diana Garle in Lin-Manuel Miranda's 21 Chump Street Photo by Morgan Sophia Photography
It took a couple of years, but City Theatre is finally celebrating the 25th anniversary of its Summer Shorts series the best way it knows how — by presenting a collection of short plays.

"We wanted to mix in something old with something new," says Margaret Ledford, City Theatre's artistic director. "We selected five plays that were among our faves over the last 25 years; then we also included five brand-spanking-new ones."

Deciding what plays would make the cut for the first Summer Shorts since 2019 was a fun, if exhaustive, process for Ledford and the rest of the company.

"We sat around and read them all aloud to see what still resonated and what should be stuck in the time capsule. Some plays don't hold up over the years," Ledford explains. "Curating a play is like being a DJ. There has to be a flow through the night. We think these ten came out as the best combination."

Among the collection of ten-minute plays are comedies, dramas, and even two musicals, penned by Pulitzer Prize winners, Emmy nominees, and Broadway darling Lin-Manuel Miranda. The Hamilton creator's musical short, 21 Chump Street, which the company previously staged in 2017, tells the story of an honor student who will do anything for his new crush. Also returning is 2008's Chronicles Simpkins Will Cut Your Ass, a play about a grade-school tetherball champion facing a new challenge.

Newer productions include Go Get 'Em, Tiger! by Steve Yockey, writer of the HBO series The Flight Attendant, in which an encounter with a tiger complicates a day at the zoo. Then there's Webster's Bitch, which finds dictionary writers at the center of a Twitter uprising over gender, obscenity, and the future of the English language.

Ledford says the goal was to present something for everyone.

"They're only ten minutes long, so if you don't like one, you get another in ten minutes," she says. "And if you like one, an even better one will be coming up next." Stephon Duncan and Jovon Jacobs in Night Vision, by Dominique Morriseau
Photo by Morgan Sophia Photography
Summer Shorts started back in 1996 as a response to the seasonal drought of theatrical productions in the city.

"There was no theater in the summer in Miami back then. Every actor in Miami was out of work," Ledford says.

The idea was to do eight short plays in the afternoon and another eight in the evening with a talented cast of performers playing a multitude of roles. This year's edition has eight actors playing close to 50 different parts across ten plays.

"I had originally cast all of the Summer Shorts actors back in 2020," Ledford notes. "When it got delayed because of COVID, I was very lucky that they were all able to come back."

The cast includes Jovon Jacobs, who will stretch his acting chops by playing a tiger, a sixth grader, and a witness to a traumatic event.

"I've worked with Summer Shorts since college. They allow you to play roles you wouldn't get to play anywhere else," Jacobs tells New Times, adding that the quick switching from character to character and genre to genre isn't as challenging as one might think. "The costumes help me get in character. It's very fast-paced, so you don't have an opportunity to linger on one character. It's a marathon backstage. We're all running around changing costumes."

While a pandemic might have delayed celebrating 25 years of Summer Shorts, the cast and crew seem confident that these performances will make up for the lost time.

Summer Shorts. Thursday, June 2, through Saturday, July 2, at the Adrienne Arsht Center for the Performing Arts, 1300 Biscayne Blvd., Miami; 305-949-6722; arshtcenter.org. Tickets cost $50 to $75.
KEEP MIAMI NEW TIMES FREE... Since we started Miami New Times, it has been defined as the free, independent voice of Miami, and we'd like to keep it that way. With local media under siege, it's more important than ever for us to rally support behind funding our local journalism. You can help by participating in our "I Support" program, allowing us to keep offering readers access to our incisive coverage of local news, food and culture with no paywalls.
Make a one-time donation today for as little as $1.