The production stars Benjamin Leon (right), founder of Loxen Productions. Photo courtesy of Loxen Productions
Lin-Manuel Miranda's Tony award-winning musical, In the Heights, returns to the Adrienne Arsht Center for the Performing Arts this weekend only with five performances. The show features an all-Miami cast and is produced by local theater company Loxen Productions and Loud and Live.

Cuban-American actor Benjamin Leon founded Loxen in 2018, and the company’s first-ever production, staged in 2019, was In the Heights, with Leon himself playing the role of Usnavi. The plan was to put on another production of Miranda’s breakthrough musical during the summer of 2020, but that was doomed by the coronavirus.

One year after the intended performance dates, Leon and many of his castmates from the 2019 production are reprising their roles for a limited run at the Arsht.

“It doesn’t get any better than the Arsht in South Florida," Leon tells New Times. “One of my favorite parts about producing this show is giving the opportunity to the entire cast to perform on a stage like the Arsht Center and being able to share in that experience with them.”


In the Heights, which premiered in New York City in 2005, had its Broadway debut in 2008; this year brought the film version.

The show is set in Washington Heights, a humble neighborhood just to the north of Harlem and south of Yonkers. It follows a young Dominican named Usnavi and the family he’s forged in his heavily Hispanic neighborhood. There’s a lot of singing and dancing throughout the 143-minute performance, and plenty of heart.

“The show is very much about being proud of where you come from,” Leon says. "It’s a show about community and family, and those are all ideals that are very important to me.”

Despite the countless times he's seen the stage production, Leon says his emotions swell throughout each time.

“It’s such a beautiful show. Even though I know what’s going to happen, and I know every line in the show, I still get choked up and emotional. It’s such a great story overall.” 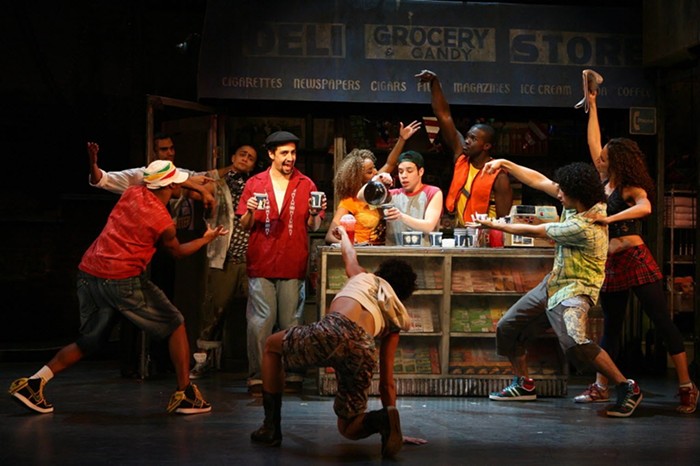 The original cast production of In the Heights.
Photo by Joan Marcus
The 23-year-old first performed In the Heights as part of the ensemble cast in a 2013 production at Miami Children’s Theater. The performance was so memorable, says Leon, that much of the same cast and crew worked with him again in 2019 and now in 2021.

“Only this time, I’m playing Usnavi. Now that I’m older and more experienced, I can handle the role,” he adds.

Hearing the one-two-three, one-two beat of the claves as the curtains pull apart and then the lyrics “Lights Up on Washington Heights” is just as exhilarating for the audience as it is for the cast on stage.

The opening number always sets the tone for the rest of the performance, which is why it remains one of the most important — and often memorable — moments of any show. What’s special for Leon about the opening number of In the Heights is sharing the stage with the entire cast.


“My favorite part about In the Heights, aside from performing it, is the relationships that are forged between cast members,” Leon says. “I’ve done other shows, but there’s no show like In The Heights that really brings a cast and crew together.”

A recent graduate of Florida International University, Leon is well on his way to cementing himself in the Miami theater scene. Not many twentysomethings can say they’ve gone from graduation to performing at one of the biggest venues in the city.

“When I founded Loxen, it was with the intention of giving young adult actors a place to be able to work locally,” Leon says. “I wanted to give Miami talent a place where they can put on high-quality, Broadway-level shows here and not feel they need to leave to New York or Los Angeles to pursue acting.”

His hope for the theater community in Miami is that it continues to grow and thrive.

“I think that it already is, and I’m really happy to see it, and I know that Loxen is a small stone in trying to make it happen.”

In the Heights. 8 p.m. Friday, July 23; 2 and 8 p.m. Saturday, July 24; and 2 and 7:30 p.m. Sunday, July 25; at the Adrienne Arsht Center for the Performing Arts, 1300 Biscayne Blvd., Miami; 305-949-6722; arshtcenter.org. Tickets cost $51.45 to $177.45.
KEEP MIAMI NEW TIMES FREE... Since we started Miami New Times, it has been defined as the free, independent voice of Miami, and we'd like to keep it that way. With local media under siege, it's more important than ever for us to rally support behind funding our local journalism. You can help by participating in our "I Support" program, allowing us to keep offering readers access to our incisive coverage of local news, food and culture with no paywalls.
Make a one-time donation today for as little as $1.