Doze Green Goes Monochrome at the Museum of Graffiti 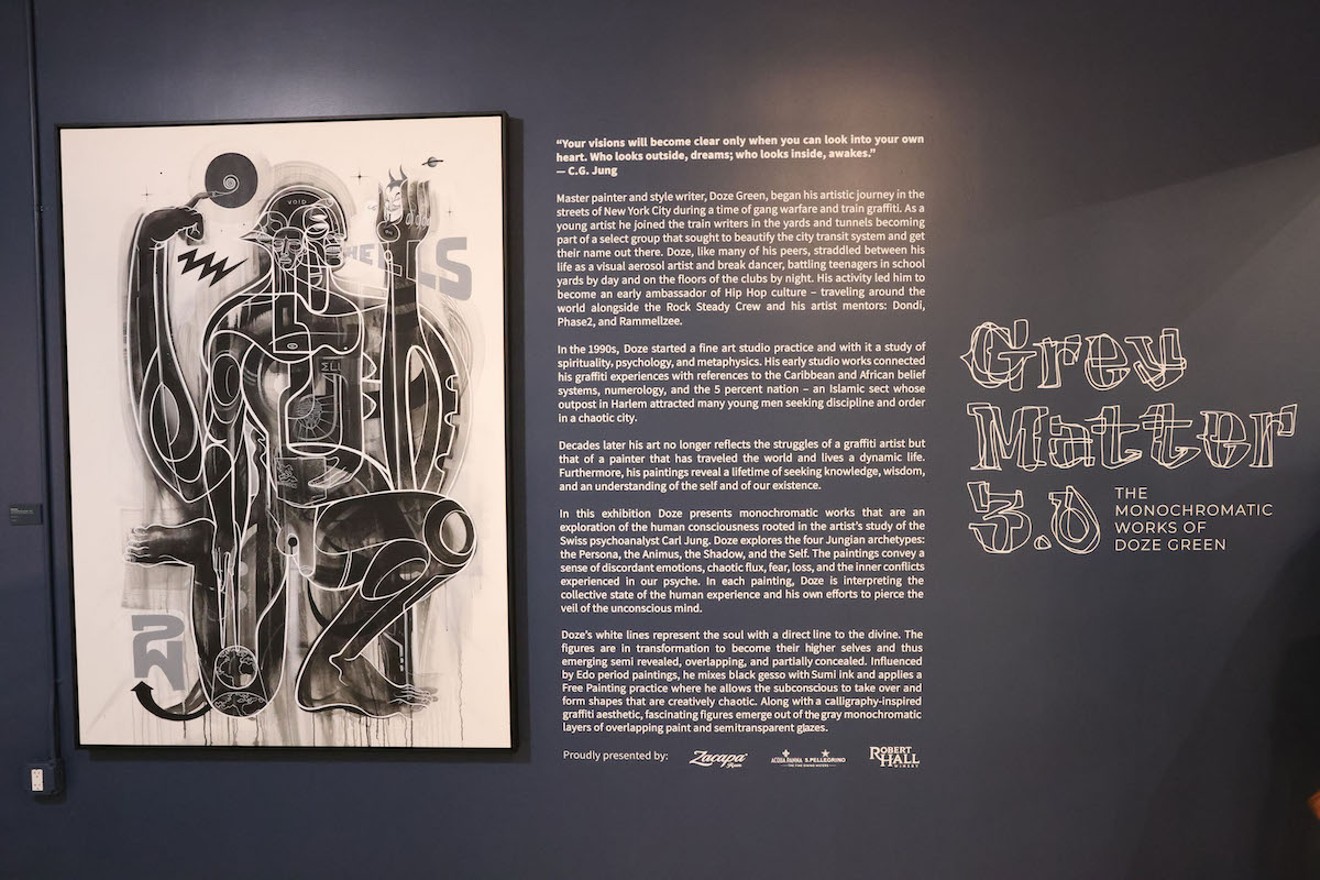 "I'm too young for a retrospective. I think retrospectives are for people in their 80s," he jokes. "They said I have a wide range of work that spans decades, and 'We would love to showcase your work.' This was pre-COVID."

As the pandemic shut everything down, the museum had to put its exhibit idea on hold for the next three years. During this time, Green was quarantined in South America, using the downtime to focus on his art. Best known for his use of vibrant colors, Green instead focused on a darker palette to mirror the uncertainty.

"I was in South America, and I was so isolated. I was in the jungle," Green says. "For three years, I did not see my family, and it gave me time to really go introspective and really go into myself and try to look [deeper]." 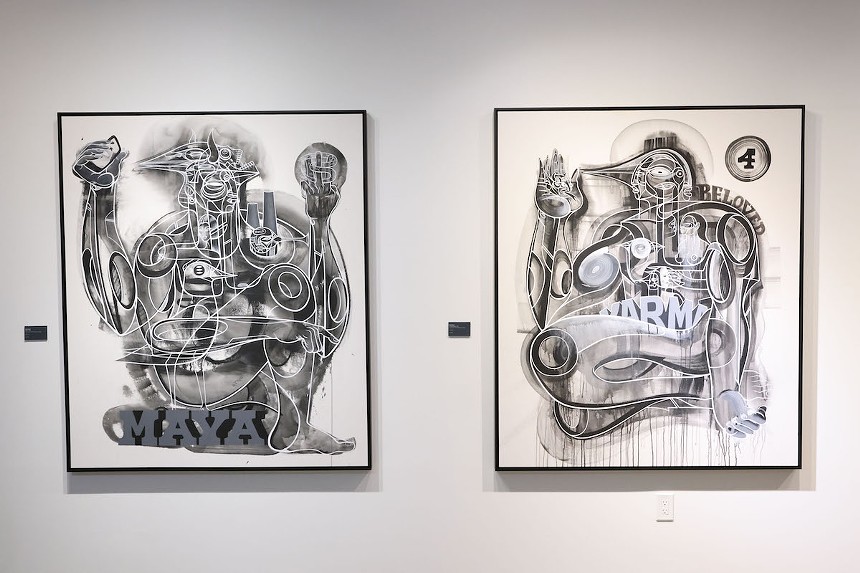 Green's work is inspired by the work of Swiss psychoanalyst Carl Jung.
Photo courtesy of Museum of Graffiti
Once the pandemic restrictions started lifting, the Museum of Graffiti and Green revisited the idea of an exhibition. However, instead of a retrospective, Green decided to highlight the art he created while in isolation in South America.

The result is "Gray Matter 3.0: the Monochromatic Works of Doze Green," which opened on July 29 at the Wynwood museum. The work on display strays away from the "Mugsy" characters he is known for, with the intention of illustrating biological entities and metaphysical spirits. Still, Green sticks to his signature cubism, capturing different planes and concentric lines on an undefined landscape.

"'Gray Matter' is in reference to the brain," Green says of the exhibition's title. "The gray matter between your ears, the memories, the shadowy memories, and fears. It is not a joyful celebration of a show. Instead, it is more of an introspective analyzation of the mind and society as a whole. How we interact — male, female, black and white — and the human experience we are going through right now."

Upon entering "Gray Matter 3.0," visitors enter a monochromatic world. Each piece uses mixed media to express Green's exploration of human consciousness, with inspiration stemming from the work of Swiss psychoanalyst Carl Jung. Green's work conveys the four Jungian archetypes: the animus, the shadow, the self, and the persona. Ultimately, the viewer sees Green's interpretation of the collective state of human experience.

"Gray Matter 3.0: the Monochromatic Works of Doze Green" is on view through August 28.
Photo courtesy of Museum of Graffiti
Green has been a part of the art scene for decades. While some artists might discover their abilities with pen and paper or a canvas, Green found it on subway trains in New York City.

Throughout his 40-year career, Green has seen his work exhibited around the world, including in New York City, London, and Brazil. He is the type of artist who brings meaning to the human experience — and that's what makes "Gray Matter 3.0" a must-see experience.

"Gray Matter 3.0: the Monochromatic Works of Doze Green." On view through August 28, at the Museum of Graffiti, 276 NW 26th St., Miami; 786-580-4678; museumofgraffiti.com. Tickets cost $12 to $16. Monday through Friday 11 a.m. to 6 p.m., Saturday and Sunday 11 a.m. to 7 p.m.
KEEP MIAMI NEW TIMES FREE... Since we started Miami New Times, it has been defined as the free, independent voice of Miami, and we'd like to keep it that way. With local media under siege, it's more important than ever for us to rally support behind funding our local journalism. You can help by participating in our "I Support" program, allowing us to keep offering readers access to our incisive coverage of local news, food and culture with no paywalls.
Make a one-time donation today for as little as $1.