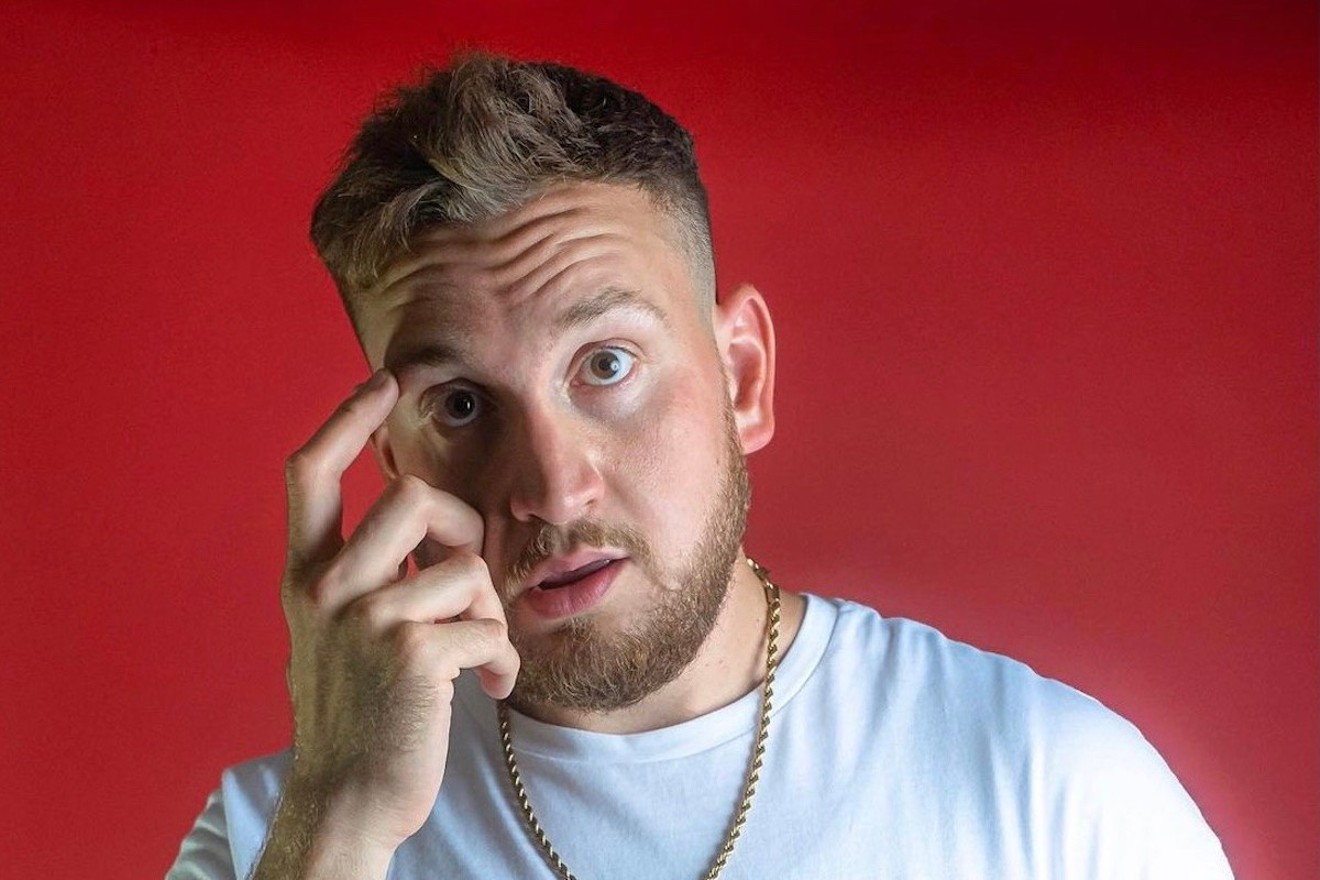 “I like producing shows that have different parts to them,” Hernandez tells New Times. “We’re gonna do different things through it — we’re gonna do freestyle hip-hop, roasting, some sketches, standup.”

The show comes after a whirlwind year for the 26-year-old comedian. Having found his footing doing improv with Just the Funny, Hernandez found himself at a creative standstill at the beginning of 2020.

“Because of COVID, I kind of had to put it to a stop because improv is an art form that you do with other people,” Hernandez says. “There has to be other people.”

Cooped up at home, he needed a creative outlet.

He began doing livestreams on Instagram under the guise of a character created for a mock dating show at Just the Funny way back in 2016. The character, Yurisbel, is an endlessly upbeat Cuban rapper with big dreams and zero self-awareness. (Imagine if a golden retriever magically swapped bodies with Pitbull, and you have Yurisbel.)

“I have Cuban uncles that sound like that character,” Hernandez says. “I kind of wanted it to be from something that I knew and that was dear to my heart.”

The character of Yurisbel was reminiscent of the kind of humor Hernandez gravitated toward when his Cuban parents were raising him in Mexico before the family emigrated to the United States.

“There was this host of a kids' show that was funny called Chabelo, and I would always imitate it,” Hernandez recounts. “He talked with, like, a kids voice: '¡Bienvenidos a casa con Chabelo!'”
A few months into quarantine, Yurisbel’s antics attracted the attention of an American Idol producer. The producer, who was fully aware that this was a comedian performing as a character, invited Hernandez to audition for the show as Yurisbel.

“It was a six-hour-long audition [via Zoom], and I had to stay in character the whole time,” Hernandez recounts. “I didn’t break once.”

He auditioned for producers at different levels of Idol’s creative team. Toward the end of the process, it became less obvious to the higher-ups on the creative ladder that this was a comedic character. Regardless, Yurisbel was invited to audition in San Diego, where he performed for judges Katy Perry, Lionel Richie, and Luke Bryan.

After a gravelly rendition of Pitbull’s "Fireball," Yurisbel was chosen to proceed to the next round in Hollywood.

Much to Hernandez’s own disbelief.

“They gave me the ticket to Hollywood, which was crazy in the first place,” he remembers. “I was in shock. You saw it in my face. I’m like, ‘What? Did you not hear me not hit any note?'"

Yurisbel was going to Hollywood — and then a funny thing happened.

Hernandez flew home to Miami between the first and second rounds of auditions, and he released a TikTok featuring him speaking in different Latin American accents: Mexican, Cuban, Colombian. It was a skill he learned from his father, a Cuban who moved to Mexico and then Miami.

“When I was growing up, I remember my dad would change his voice depending on the person he was speaking with,” Hernandez explains. “I can try to match voices well, I think.”

As Hernandez was in Hollywood for the second round of auditions, the video went viral. (It currently sits at 4.5 million views on TikTok.)

As production continued on the Idol set, Yurisbel was asked a simple question on camera: Who is Carlos Hernandez? They'd gotten wise to Hernandez’s alter ego. Butin that moment, Hernandez remembered one of the tenets of improv: Never break character.
“I stayed in character the whole time," he says. "I was like, ‘Well, that’s my birth name, you know. Yurisbel is my stage name. Lady Gaga’s real name is not Lady Gaga, you know? Katy Perry? Is that your real name, mami?’”

Yurisbel didn’t become the next American Idol, but Hernandez came home armed with some creative clout. The folks at Only in Dade took notice of Hernandez’s accent challenge and offered him a job as a content creator with the channel.

Then there was Yurisbel, whose own career was popping.

Hernandez began producing tracks like "Mi Abuelita," which got its own music video featuring Yursibel alongside some twerking abuelitas. Then a young fan re-created the music video for "Mi Abuelita" on his own Instagram page, not unlike the way Hernandez himself grew up imitating comedians like Chabelo. Hernandez — or, more accurately, Yurisbel — wound up surprising the kid at his birthday party.

“We sang together,” Hernandez says. “He had a picture with my face on it, and he wanted me to sign it. It was amazing.”

Hernandez obviously relishes moments like this, when fans can become a part of the thing they appreciate.

As for his upcoming show at the Improv, Hernandez promises something along those lines.

“If you like Yurisbel, you’re going to see Yurisbel. If you like the Only in Date stuff and me interacting with people, we’re going to have it,” Hernandez says. “If you’re at the show, you might get a chance to be on stage with me, and we’ll shoot the shit.”

Cahrlos Live. 8 p.m. Thursday, July 1, at the Miami Improv, 3450 NW 83rd Ave., Suite 224, Doral; 305-441-8200; miamiimprov.com. Tickets cost $22 via miamiimprov.com.
KEEP MIAMI NEW TIMES FREE... Since we started Miami New Times, it has been defined as the free, independent voice of Miami, and we'd like to keep it that way. With local media under siege, it's more important than ever for us to rally support behind funding our local journalism. You can help by participating in our "I Support" program, allowing us to keep offering readers access to our incisive coverage of local news, food and culture with no paywalls.
Make a one-time donation today for as little as $1.