A still from Ates Isildak's Fabulous Muscles Photo courtesy of Anita's Film Fesitval
This year's Pride Month is particularly significant in the state of Florida.

This year has brought an onslaught of legislative attacks against the queer community around the U.S., including in Florida, under the guise of child safety. It's a question of queer representation and existence that remains more than 50 years after the Stonewall Riots, a watershed event that is commemorated by Pride Month. A half-century later, the perseverance of bigotry remains, but luckily, so does the resilience of the queer community.

That resilience and representation will be on display at the inaugural Anita's Film Festival on Saturday, June 25, at the Hotel Gaythering.

A queer offshoot of the Sun Pass Film Festival, an independent cinema showcase for emerging local filmmakers created by Chris Molina, Anita's Film Festival doesn't shy away from the political moment for the queer community. As Molina states, "The festival and its diverse lineup of filmmakers across the LGBTQIA+ umbrella is a direct response to the anti-queer legislation across the country, but especially those being put into law in Florida." Provocatively and playfully named after both Anita Bryant, Florida's own anti-queer activist, and the ubiquitous use of Anita as a drag name, Anita's Film Festival is just what the South Florida queer community needs at this moment.

Molina has selected 13 short films, all under ten minutes, that will screen starting at 7 p.m., followed by an afterparty sponsored by E11even vodka. The lineup is an eclectic mix of projects exploring themes of queer existence, history, and utopia. Mixing experimental cinema with narrative films, the works blend the personal with the political with seriousness and satire. Predominately made up of local filmmakers, the festival also expands the reach of the Sun Pass Film Festival to include filmmakers from Chicago, New York, Los Angeles, and elsewhere.

A still from Gerald Varela's Bruise Like Fruit
Photo courtesy of Anita's Film Fesitval
Thematically, several films complement and overlap in intriguing ways. Many filmmakers are playing with ideas about queer history and politics. Pamela Largespanda's NIVERO54 imagines 1970s Miami with a Studio 54 disco filter exploring spiritual and sexual awakenings. An Army of Lovers Must Not Die, by Caleb Cole, juxtaposes a 1991 speech by Larry Kramer at NYC Pride against stark black-and-white imagery. Sam Greiner extrapolates meaning by contrasting music with a montage of political foes and LGBTQ heroes in I Never Get Lonesome.

Another theme that comes through in the collection: queer bodies and agency. Gerald Varela's Bruise Like Fruit takes on reproductive rights from a queer perspective, while Fabulous Muscles by Ates Isildak interrogates the boundaries between the body and the gaze where sexual desire, fetish, and exploitation meet. Molina's own film, Gym Class '67 (Summer of Love), combines a poem by Steve Cranfield with vintage Bob Mizer-esque physic photography creating a dreamlike tableau.

Satire and spoof are reflected in two works. Monogamy House, by Henry Hanson, employs reality television tropes to comment on ideals of sexual exploration, marriage, and respectability. And in a commercial from the Flaming Classics film series, Miami-based performer Jupiter Velvet transforms into a Nicole Kidman cipher enjoying queer representation on screen. 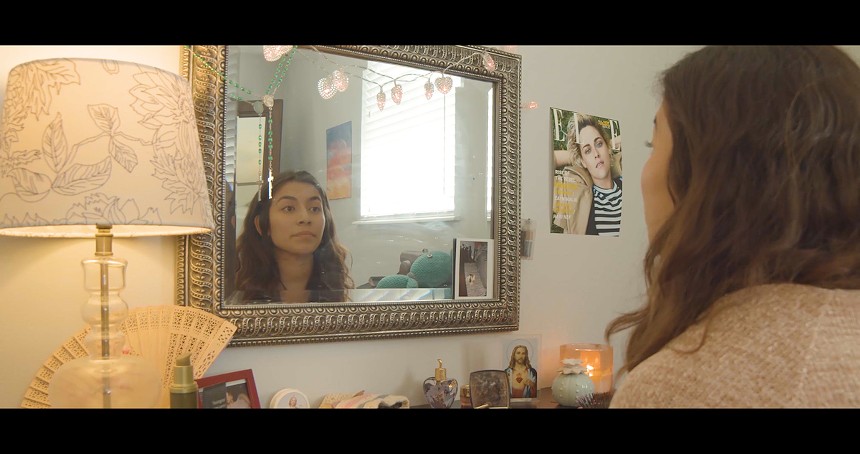 A still from Nicolas Hermann's In Out
Photo courtesy of Anita's Film Fesitval
Finally, relationship issues abound in films exploring dating and romantic longing. In Out, a film by Nicolas Hermann, a closeted teen must balance a burgeoning relationship with familial tensions. Samuel Vargas' Bi The Way foregrounds two young men struggling to express their growing feelings about each other. In contrast to those beginnings, Ari Johnson's One Last Letter centers on Amanda as she must move on after the end of a traumatic relationship. In an interesting way, Lovespell, directed by Homosuperior, is an avant-garde solution to all these issues with a step-by-step instructional ritual to manifest true love.

To quote Anita Bryant, "Homosexuals cannot reproduce, so they must recruit." With that spirit in mind, Molina has created a wonderful recruitment event that centers and celebrates queer expression and existence. A festival about community and creativity, the Anita's Film Festival is a perfect way to close out Pride Month. You can learn more about the festival and purchase tickets here.

Anita's Film Festival. 6:30 p.m. Saturday, June 25, at Hotel Gaythering, 1409 Lincoln Rd., Miami Beach; 786-284-1176; gathering.com. Tickets cost $10 via eventbrite.com.
KEEP MIAMI NEW TIMES FREE... Since we started Miami New Times, it has been defined as the free, independent voice of Miami, and we'd like to keep it that way. With local media under siege, it's more important than ever for us to rally support behind funding our local journalism. You can help by participating in our "I Support" program, allowing us to keep offering readers access to our incisive coverage of local news, food and culture with no paywalls.
Make a one-time donation today for as little as $1.