Tatu Baby on Black Ink Crew, Running Her Own Shop, and Family Values 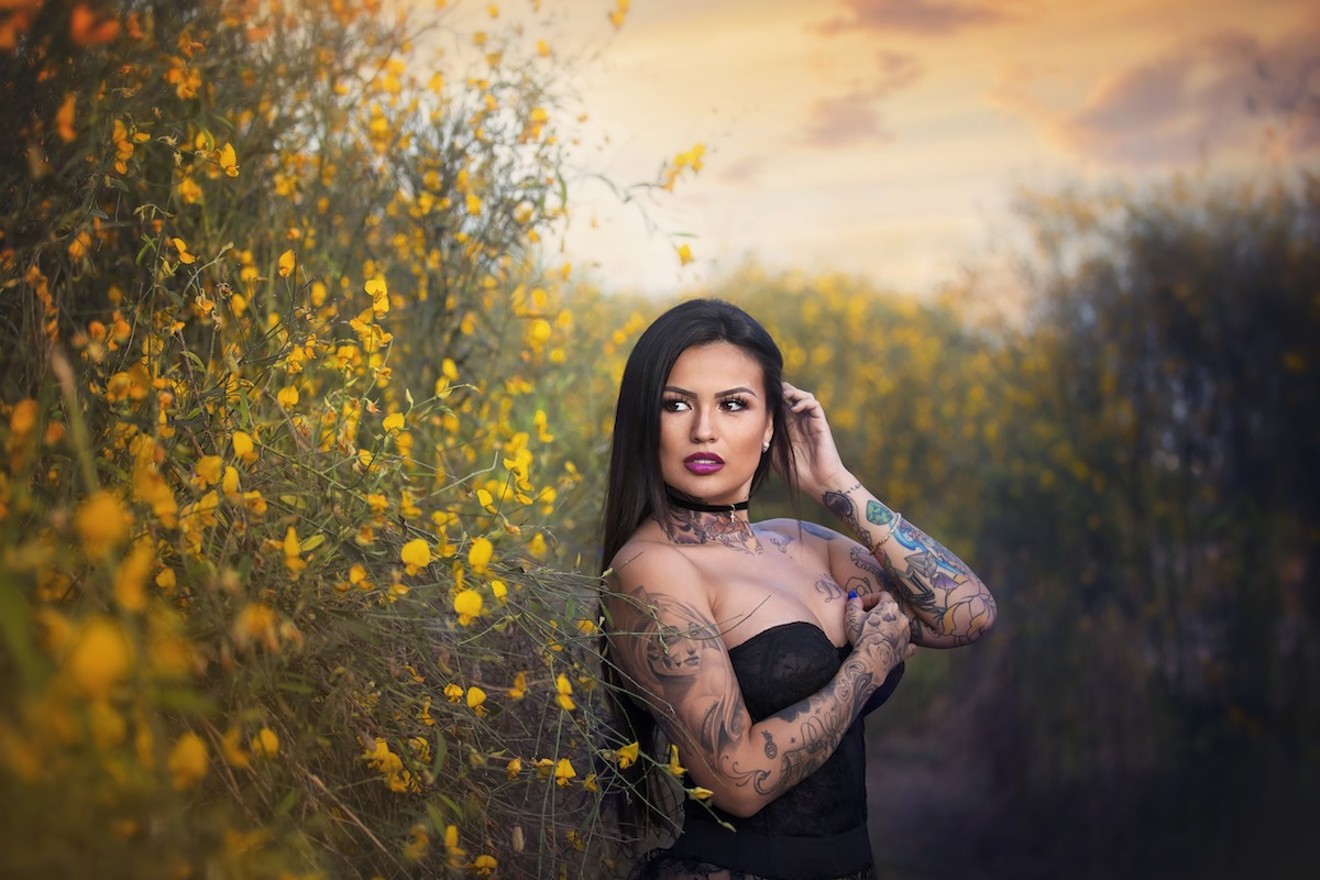 Tatu Baby in her natural habitat. Legacy Photography
It’s been awhile since New Times talked to Tatu Baby, AKA Katherine Flores, Miami’s bombshell tattoo artist and popular two-time contestant on Spike TV’s Ink Master in 2012 and 2013. This year, she’s back on TV, hanging out with Ceaser from VH1’s Black Ink Crew.

Rumor has it sparks flew between Tatu Baby and Ceaser after Harlem's king of tattoos flew to Miami with cast members Sky, Donna, and Teddy — soon after his breakup with fiancée Dutchess.

In "Ride the Sky Train," the episode of Black Ink Crew that originally aired March 1, Tatu Baby meets Ceaser in her new shop, Till the End Tattoo Gallery, which she opened in 2016. She’s the second woman to ever ink Ceaser — and the first one was Dutchess. “He was going through a tough personal time and thought it would be a good thing to get a tat of his mom on his leg,” she recalls. “His mom was very beautiful, and it was an honor to do this tattoo on him.”

In the episode, she later shows him some 305-style hospitality at Wynwood’s El Patio with a salsa lesson. In a moment of culture shock, Ceaser admits his awkwardness about learning salsa. “I felt out of place. Where the hell are we, Colombia or something?”

Born in Queens to Colombian parents, the self-taught artist moved to Miami with her family when she was 6 and already drawing. Her passion for tattoos developed at age 14, when her mom took her to a shop so they could get matching tattoos. “When I saw the artist’s work, I thought it would be cool,” she recalls. “My mom had me at a young age, so we have a ‘best friends’ type of relationship.”

Flores herself is the mother of a 2-and-a-half-year-old boy and carries the love of Colombia into her work and family life. “I feel like I represent my country, so I do a lot of Latino-inspired tattoos,” the 29-year-old explains. “In my household, it’s important to have our traditions. We only speak Spanish, eat Latin food, dance salsa, and pass on traditions to kids.”
It’s no wonder she added salsa to the mix on Black Ink Crew. The dance-floor moves also translated into a positive step for her career, which she began professionally at the age of 19. “It was good to meet another entrepreneur who owns tattoo shops,” she says.

Unlike competition-driven Ink Master, Black Ink Crew proved easier for Flores. “There was no pressure on Black Ink,” she says. “In a competition show, there are a lot of factors that go against you, such as time. Now I was able to tat in the comfort of my own business and do what I do best.”

The shop has given Flores the opportunity to focus more on customers. “Everything we do is custom,” she says. “I talk to my clients a lot more now. I want to know what the story is, what things mean to them. Nothing here is rushed.”

“When I tat, my work is so technical,” she says. “I wanted to paint something where I could express myself more freely instead of having to be meticulous.”

Flores is dreaming big about owning more shops, having her own TV show, and launching a clothing line — all in good time. As for Black Ink, we'll see the artists again mixing business with pleasure at a tattoo convention in "Buenos Dias, Puerto Rico," an episode that premieres Wednesday, March 15.