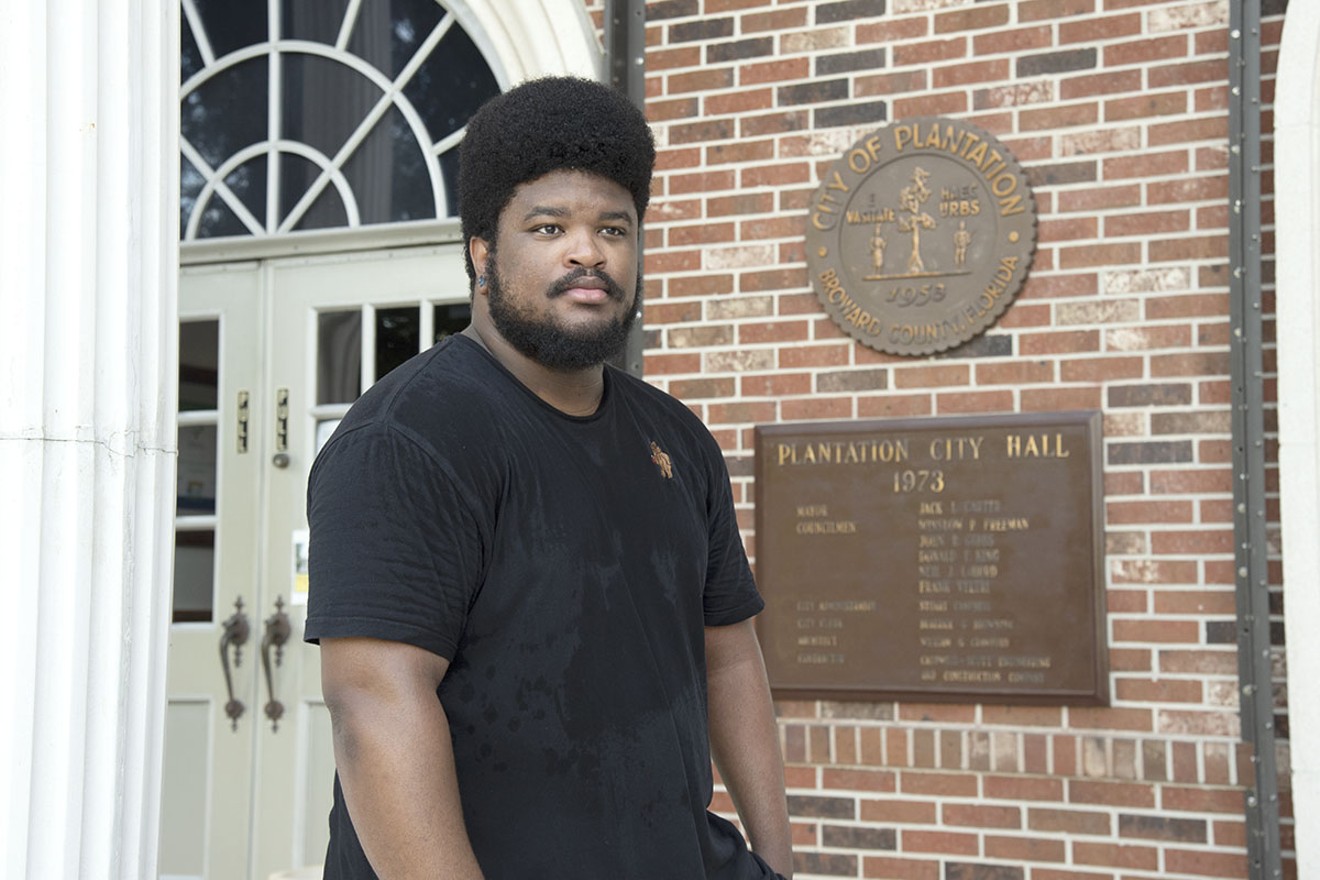 Plantation resident Dharyl Auguste says it's time for the Broward municipality to change its name. Photo by Michele Eve Sandberg
From the outside looking in, the City of Plantation is a run-of-a-mill suburb sprawling with all the elements of a developed township: shopping plazas, restaurants, schools, tidy neighborhoods, and a fancy golf course.

All that — plus a name that carries an explicit racist echo of the days when slavery was the law of the land.

Inspired by the ongoing #BlackLivesMatter demonstrations and the recent topplings of Confederate and colonizer statues around the world in the wake of George Floyd’s death, one Plantation resident decided it was high time the city tore down its moniker and rebooted with a clean slate.

Earlier this month, Dharyl Auguste created an online petition calling on Gov. Ron DeSantis and city leaders to change the name of Plantation.

"...I believe this is the perfect time for the city to align itself on the right side of history by casting away a name that does it no justice," Auguste's petition reads in part. "Plantation and the areas surrounding it are a diverse melting pot that shouldn’t have to carry a reminder of oppression in its namesake. I believe this will spark a renewed faith in our city council and give way for a new history to be told that separates itself from a shameful past."

In the petition, Auguste suggests Plantation's mayor and city council change the town's name to Jacaranda, writing, "This is a familiar and friendlier name to the community and can easily still distinguish the place it’s referring too. It can be made into Jacaranda City, Ville or any other version that denotes a township."

The petition drew scant attention at first, topping 1,000 signatures in the first few days. But the numbers continued to climb as word of the effort began to percolate through social media with the hashtags #PlantationNoMore and #AnythingButPlantation. On June 10, Auguste brought his proposal to the Plantation City Council. Two days later, he appeared on CNN.

Reached by New Times for an interview last week, Auguste reports that his presentation at city hall prompted scant reaction from the dais, with the exception of Council Member Denise Horland, who offered to have a conversation with him about his concerns about the city’s name.

“She told me she appreciated my effort, my movement, and that my voice needs to be heard, so I appreciate her for that,” he says.

Auguste, who's 27, grew up in Sunrise but attended public schools in Plantation and met his future wife there.

He is also familiar with the city’s racist relics.

As a student at Plantation High School, he raised concerns to the administration about the implications of its team name, the Colonels. (The school's mascot, originally a droopy-mustached Southern colonel, was changed to a stylized letter C in the 1990s.) 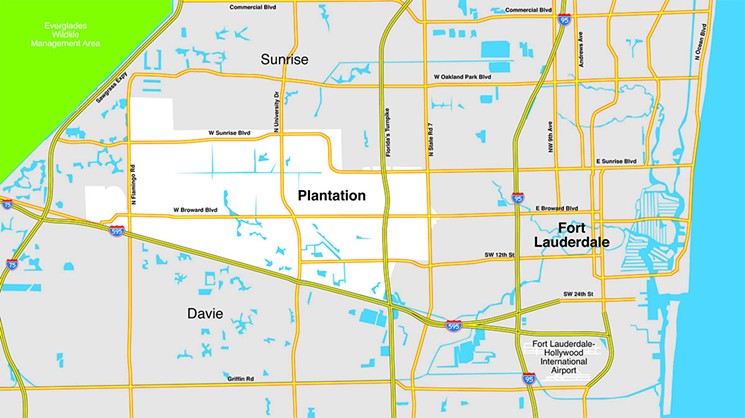 Named for an ill-fated plan to develop a vast rice plantation in the Everglades, the City of Plantation was formally incorporated in 1952.
Map by Tom Carlson for New Times
Before Plantation was formally incorporated as a city in 1952, the land it occupies was part of the Everglades and covered in water. Beginning at the turn of the 20th century, Florida legislators made plans to drain millions of acres of the swampland, including the 22 square miles that would become Plantation. Originally, the idea was to grow rice on the land, which led to the formation of the ill-fated Everglades Plantation Company. Following several decades of failed drainage attempts and lawsuits over the ownership of the land, Frederick C. Peters, a millionaire heir to a St. Louis shoe fortune, moved to the area when doctors prescribed sunny climate for his sickly son. Peters initially intended to build a farming cooperative on the marshland but subsequently saw an opportunity for urban development and brought in architect Russel T. Pancoast to lay out a master plan.

“Nothing happens until around the end of World War II when they brought on another architect from Miami, Robert Law Weed,” says Paul George, resident historian at HistoryMiami Museum. "Weed develops homes for a subdivision and then that subdivision is named Plantation — probably because of the Everglades Plantation Company.”

And so Plantation was born.

George says the city’s name is a misnomer that was never questioned, likely because it wouldn't have occurred to a mostly white populace to disassociate itself from a name that connoted slavery, particularly a community ensconced in the Jim Crow South of the 1950s.

“I would understand the impetus to change the name because it does conjure up something bad in our history. But in reality, there wasn’t [ever] a slave plantation there,” George adds.

Plantation benefited from Broward County's boom, leading to a larger influx of white suburbanites lured by relatively inexpensive land that was available for purchase in large plots.

In recent decades, however, the mass migration of Caribbean communities, coupled with an increase in the population of Black American residents in southeast Broward, has diversified towns like Plantation. According to a 2018 American Community Survey published by the U.S. Census Bureau, the Black and Hispanic population consisted of 27.4 percent and 25.6 percent of the total population, respectively.

Dharyl Auguste isn't the only South Floridian to suggest the region take steps to distance itself from its racist past.

A separate online petition was recently launched to rename Broward County, which immortalizes former Florida Gov. Napoleon Bonaparte Broward, who in the early 20th Century espoused the belief that Blacks should be removed from the United States and given their own country. In response to the petition, Broward Mayor Dale Holness recently suggested that the county change its name to Fort Lauderdale County. 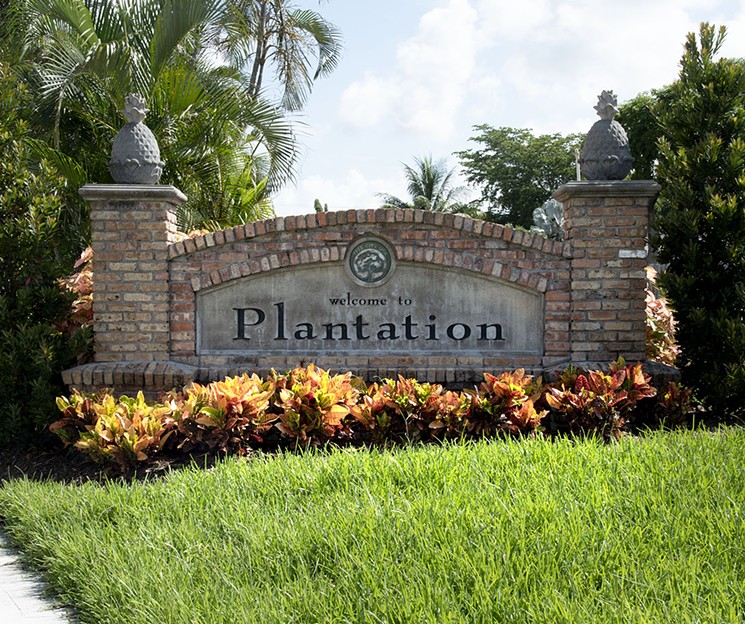 Welcome to [Insert Non-Racist Town Name Here]
Photo by Michele Eve Sandberg
In 2017, city commissioners in Hollywood voted to change city street names that honored Confederate generals Robert E. Lee, John Bell Hood, and Nathan Bedford Forrest. And this past November, Miami-Dade County commissioners unanimously resolved to lay to rest Dixie Highway, a persistent reminder of the antebellum South. (The county will rename the roadway to honor famed abolitionist Harriet Tubman, but it only controls parts iconic highway; it would be up to the Florida legislature to completely eradicate Dixie from the map.)

Elsewhere in the U.S., a 2010 referendum to shorten Rhode Island's official name — the State of Rhode Island and Providence Plantations — failed by a wide margin. But recent events have caused the matter to come up for discussion again.

Auguste tells New Times that the road to a new name for Plantation, Florida, hasn't been without its rough spots. He says he has been heckled by antagonists, but he refuses to be intimidated and will continue to advocate for a rechristening.

At press time, his petition had garnered more than 7,500 signatures, prompting Auguste to push the goalposts to 10,000 signatures.

“I’m comfortable with renaming it Jacaranda, but some of the options for names can still come from that historical part,” he says. “I just want people to have fun with it.”

New Times reached out to Plantation Mayor Lynn Stoner and Council Member Denise Horland, neither of whom responded to requests for comment.
KEEP MIAMI NEW TIMES FREE... Since we started Miami New Times, it has been defined as the free, independent voice of Miami, and we'd like to keep it that way. With local media under siege, it's more important than ever for us to rally support behind funding our local journalism. You can help by participating in our "I Support" program, allowing us to keep offering readers access to our incisive coverage of local news, food and culture with no paywalls.
Make a one-time donation today for as little as $1.