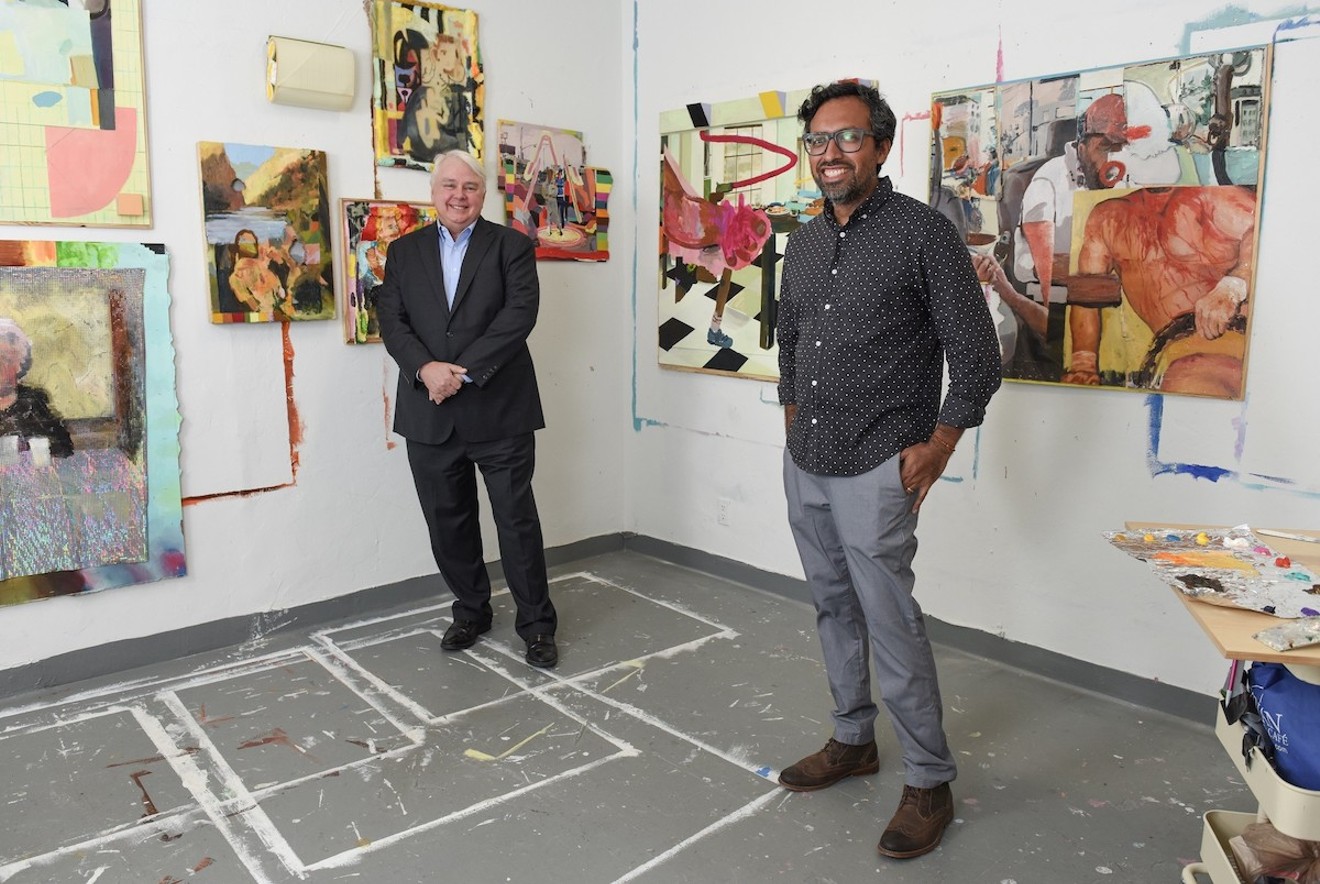 Oolite Arts CEO Dennis Scholl (left) and artist Diego Gutierrez Photo by Christina Mendinghall
Without having to do much of anything, painter Michael Vasquez has seen his art transform over the past several months.

"At the beginning of all this — the pandemic and even prior to the protests — I began thinking about how my work can shift. Not visually and not by me changing something, but by the current state of things informing people's notions of who these people are that I depict," Vasquez explains.

Vasquez has made a career out of painting vibrant, dynamic portraits and tableaus of street subculture and gang life. Bandanna face coverings have been part of his visual repertoire for years.

"Prior to this, they were gang members," Vasquez says of his subjects. "When the pandemic hit, they were essential workers. And then somehow, still, painting the same people, the essential workers became protesters or activists. My work, without me doing anything or changing a thing, has shifted through this time."

It's almost reassuring to see that art's ability to crack open representations and reveal us to ourselves hasn't been lost in the pandemic, even as many other things disappear or transform. Vasquez hasn't changed who he paints, but he did begin working on a smaller scale as he shifted his practice from his shared studio to his home.

But with the launch of Oolite Arts' acquisitions program this month, the artist has had something to be productive for and to look forward to in the form of a commission for Oolite's space in Little River slated to open in 2023.

"There's something empowering in knowing that they recognize the importance of the arts, especially through a time like this," Vasquez says. "Without us, what is Oolite going to be about? They can't do that without artists, and artists can't function without some form of support and encouragement."

"Visual artists in our community generally work out of a gig economy, and the gig economy is the first thing to go away with a crisis."

This was on Dennis Scholl's mind early in the outbreak of COVID-19. As president and CEO of Oolite Arts, Scholl immediately anticipated the fallout that would confront artists.

"Literally, within ten days of the lockdown, we went to work on a relief fund. We were concerned about artists making rent, food security for artists," Scholl recalls. "The visual artists in our community generally work out of a gig economy, and the gig economy is the first thing to go away with a crisis like this. And we're concerned that it will be the last thing to come back."

Oolite first mobilized a small stipend for its residents, followed by a relief fund for visual artists across Miami-Dade County. Requiring little more than a CV and proof of address, Oolite was able to get almost a quarter of a million dollars to 464 artists across the county. This was followed by similar relief programs from the City of Miami Beach, the Jorge M. Pérez Family Foundation, and the Miami-Dade County Department of Cultural Affairs. But immediate support doesn't quite address the real scope of what needs to change.

"We're all having to pivot and iterate. We can't keep doing things the way we've been doing them for decades," Scholl says. "We have to adjust our goals, adjust our aspirations, adjust our strategy. We need to meet our audience now where they've gone to, not where they used to be. And the same with the artists — we can't just say, 'Here's a residency program.' We have to find a way to reach more artists and to help more artists."

Resident artist Gonzalo Fuenmayor in his studio.
Photo by Diana Larrea
The limitations of residencies in the COVID era became very real for sculptor Yanira Collado in March, when she had to abruptly leave her Joan Mitchell Foundation residency. Oolite had awarded Collado an Ellies Award grant for a project collecting and archiving oral traditions and mythology from the Dominican Republic. She planned to finish it during her residency, traveling back and forth between New Orleans, Florida, and the Dominican. A wealth of programming was intended to accompany the work, including workshops bringing together children and adults.

"I was really worried about more of the world outside of art, first of all," Collado says of the truncated residency. "Artists, emotionally, have more tools for being isolated. We'll use that time — we value time, we never seem to have enough time. But I saw my friends falling apart a little bit emotionally because they don't know what to do when they don't have a regimen."

Oolite's acquisition program ensured that not only would Collado's project not fall apart, but that it would also have a fulfilling journey after completion. Unlike a typical acquisition program, Oolite guarantees that after the work is exhibited at its new space, it will be donated to museums. That's an especially exciting prospect for Collado, who views this work as a form of protection and communication. With her work both funded and acquired, Collado was able to find new avenues for her process.

"I had to use the web, but also think about sculpting with video and sound. I hesitated my whole life to touch that medium," Collado explains. "I also then recruited people. I asked every and any Dominican I knew, 'What is your grandma doing right now?' I'm able to reach more people than I would have if I had just kept to my script and kept to my idea."

While it was part of the art program's long-term goal to start an acquisition program, the accelerated pace has meant a lot to artists. In total, Oolite is acquiring nine works from seven artists. In addition to Collado and Vasquez, it has purchased or commissioned works from Gonzalo Fuenmayor, Adler Guerrier, Diego Gutierrez, Karen Rifas, and Anastasia Samoylova.

Collado and Vasquez emphasize that the acquisitions didn't take away the severity or the tragedy of COVID, but instead provided something akin to a light at the end of the tunnel.

"It's one of the things we're doing to help keep the art ecosystem going in Miami-Dade," Scholl asserts. "That's our job."
KEEP MIAMI NEW TIMES FREE... Since we started Miami New Times, it has been defined as the free, independent voice of Miami, and we'd like to keep it that way. With local media under siege, it's more important than ever for us to rally support behind funding our local journalism. You can help by participating in our "I Support" program, allowing us to keep offering readers access to our incisive coverage of local news, food and culture with no paywalls.
Make a one-time donation today for as little as $1.
Taylor Estape
Follow:
Twitter: @taylors_poetry