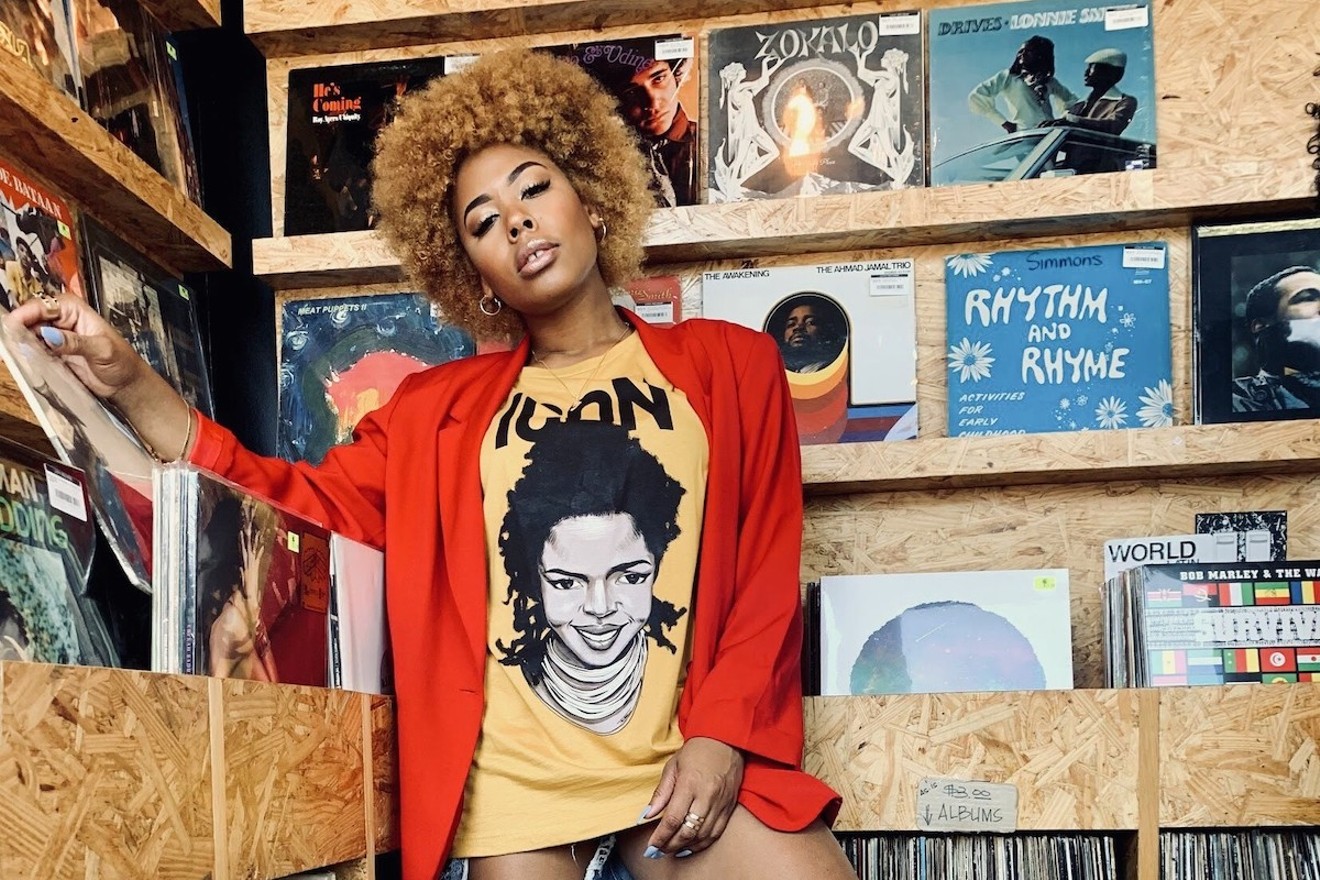 A model wears the Lauryn Hill icon shirt. Photo courtesy of COOL Creative
In Little Haiti, on the corner of NE 62nd Street and Second Avenue, there’s a great big sign that reads “magic.” It’s only fitting that a block over is a handsome corner store where enchanting things are brewing.

One Saturday afternoon in November, entrepreneur and COOL Creative owner and founder Johanne Wilson puts the finishing touches on her new storefront. She wears a black blazer with a Janet Jackson tee and has her braided hair up in a bun. Her facemask has the words “future-ready” printed on it.

Although Wilson started her own creative agency, Create Out of Love — COOL for short — in 2012, the businesswoman only expanded into branded apparel in 2018. COOL Creative has grown a lot in the last two years, and Wilson is now gearing up to open a shop in the heart of Little Haiti.

So how is pulling this off in the middle of a pandemic that has plunged the country into an economic crisis? Well, she's getting some help from Beyoncé.

This month, Wilson discovered she was a recipient of the BeyGood and NAACP's Black-Owned Small Business Impact Fund. Launched earlier this year by the musician and mogul, BeyGood intends to award $10,000 grants  to Black-owned small businesses through the end of 2020.

Wilson was casually checking emails and clearing her spam folder when she noticed something from the NAACP. She opened the email, and her gaze fell on the word “congratulations” in bold.

“I had to read it a few times before it sunk in,” Wilson recalls

The fund's application goes beyond filling out a business' mission and financial needs. BeyGood wants to know more. One question that stood out to Wilson was about impact and what sort of role the business has in the community.

“They weren’t just looking for Black businesses doing cool things, but if you are actually contributing to the community,” Wilson says. “As a business person, it’s about paying it forward as well.”

COOL Creative's Little Haiti store
Photo courtesy of COOL Creative
Originally from Brooklyn, Wilson moved to South Florida in 2007 and lives  in Hollywood. When the pandemic struck, she immediately began to think of ways she could help. COOL Creative started selling reusable facemasks, and for each one sold, Wilson pledged to donate one to a frontline worker. She distributed more than 2,000 masks in the Miramar area this summer.

In addition to her philanthropic work, Wilson has run an inclusive internship program since starting her own agency.

“If you’re the only one, then that’s not necessarily something to be proud of because it means that you’re not reaching back. It means that you aren’t bringing other people along the path with you.”

COOL Creative’s internship program will be extended to the shop once it opens in December. Wilson hopes to teach all sorts of people how to operate their own business and how to market and sell goods and services.

“Minority, Black, brown, anybody that does not have the wealth of opportunities that other people do,” she adds. “I want to bring them in and expose them to how they can run a creative business.”

The idea for a fashion brand started with a simple illustration. Wilson’s husband, Terrance, drew a portrait of the late Nelson Mandela. A powerful feeling — and her business savvy — compelled Wilson to put the image on a T-shirt. Mandela’s portrait stood powerfully under the word "icon" in large bold type. Wilson put the tee up for sale via Instagram, and it quickly sold out. Years later, COOL Creative has a slew of icon portraits on tees, sweatshirts, jackets, and more.

The original shirt inspired the brand’s now-recognizable icon series, which feature faces of famous Black pioneers on soft tees. With Black history often overlooked in schools, Wilson and her husband see the images as a way to teach their daughter about Black heroes.

As a Haitian-American herself, Wilson understands the importance of representation and hopes that with COOL Creative she can not only engage the community but inspire its people.

“It’s no secret to anybody that lives in Miami that gentrification is real, and Little Haiti has been taken over,” Wilson explains. “So I just thought it was important for us to stake a claim in Little Haiti, in a space where there are not many other Haitian businesses. We need to represent and do something that’s representative because that matters.”

Wilson’s vision for the COOL Creative space is to be more than just a clothing store. She hopes to eventually host events, book readings, and be a creative hub for the community and plans on featuring the work of other local artisans, particularly women-owned and minority-owned brands.

COOL Creative. 300 NW 62nd St., Miami; shopcoolcreative.com. Opening December 2020.
KEEP MIAMI NEW TIMES FREE... Since we started Miami New Times, it has been defined as the free, independent voice of Miami, and we'd like to keep it that way. With local media under siege, it's more important than ever for us to rally support behind funding our local journalism. You can help by participating in our "I Support" program, allowing us to keep offering readers access to our incisive coverage of local news, food and culture with no paywalls.
Make a one-time donation today for as little as $1.