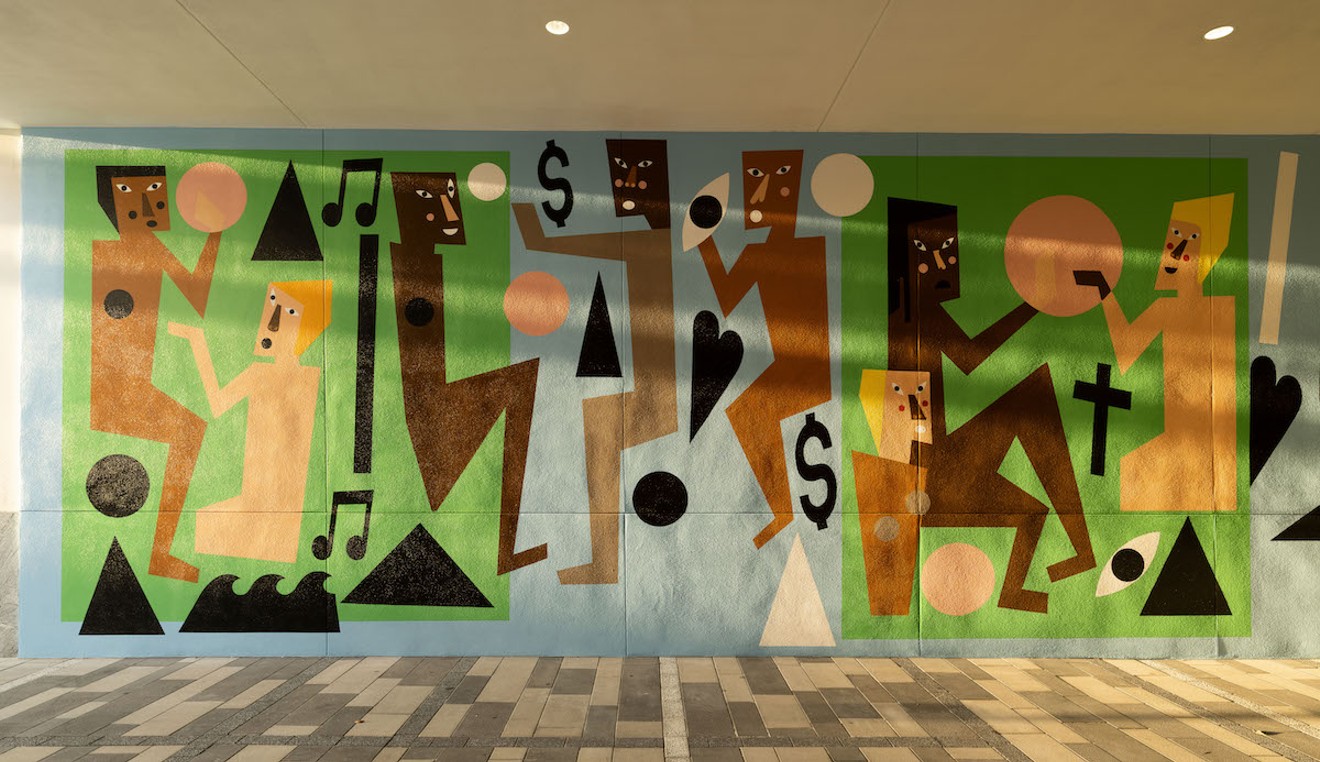 Miami Worldcenter recently unveiled a mural by artist Nina Chanel Abney that decorates a breezeway. Photo by Oriol Tarridas
The soft, milky white outline of the moon appears overhead as the sun prepares to set in the west. The newly revealed blue- and green-hued mural at Miami Worldcenter pops against the clouds. Developer Nitin Motwani stands tall underneath the impressive work by artist Nina Chanel Abney.

Motwani, managing partner at Miami Worldcenter Associates, beams with pride as he walks down the breezeway and points to various aspects of the artwork. His firm recently announced a $5 million grant to curate site-specific public art to be placed throughout the 27-acre property in downtown Miami.

The aim of the program is to bring world-class art to the masses. Art dealer and curator Jeffrey Deitch, along with Miami’s own curatorial team at Primary, have been brought on to help lead the initiative. The team’s first order of business was to create an all-star committee to ensure the selection of artists was objective.

Although the grant was announced earlier this month and the first artwork revealed, Motwani sighs with relief as he explains that the project has been years in the making.

Over the past three years, Motwani worked closely with the curatorial team. Together they assembled the third-party committee, identified the artists, found locations for the works, and began production on the pieces. 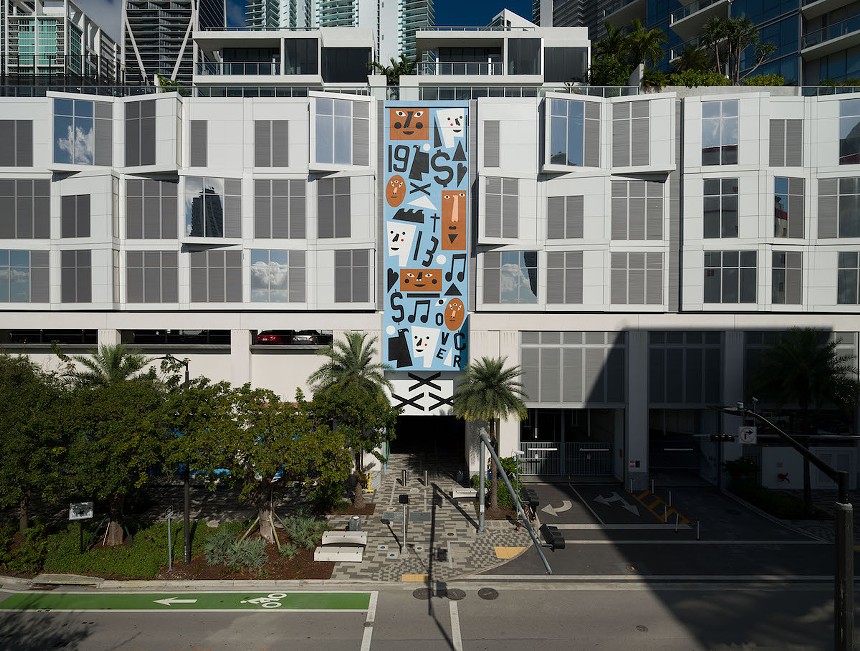 Miami Worldcenter brought in art dealer Jeffrey Deitch and the curatorial team behind Primary to lead the project's public art initiative.
Photo by Oriol Tarridas
“When you’re working with such high-quality artists, high-quality curators, and this incredible committee,” Motwani explains, “a lot of great, inspiring ideas come about.”

The works will be strategically placed in high-traffic areas as well as places with the most visibility. The idea is to create an outdoor museum of sorts, where the community can engage with the works no matter where they’re walking — or driving — from.

To one side of Motwani is a recent complete building and the site of incoming restaurants and businesses; to the other is a plastic fence enclosing a soon-to-be public park. He looks around, the sun reflecting off his black aviator sunglasses. It’s clear he’s visualizing the future use of the space: folks walking through the city, coming or going from Pérez Art Museum Miami or the Frost Science Museum and passing through Miami Worldcenter to shop or dine — all while being exposed to world-class public art.

“We want the art to flow through the city, and that’s what we’re trying to do."

“We want the art to flow through the city, and that’s what we’re trying to do,” the developer says.

Abney’s mural is the first piece to be unveiled as part of the project. Brown, tan, and white shapes take the form of people living harmoniously together among music notes and large blackbirds. One part of the mural can be seen while driving along NE Second Avenue. The work continues along the walls of a pedestrian tunnel and spills over to the other side of the building.

Speaking to New Times from his home in Los Angeles, Deitch describes Abney’s mural as one of the most ambitious public artworks in recent times. 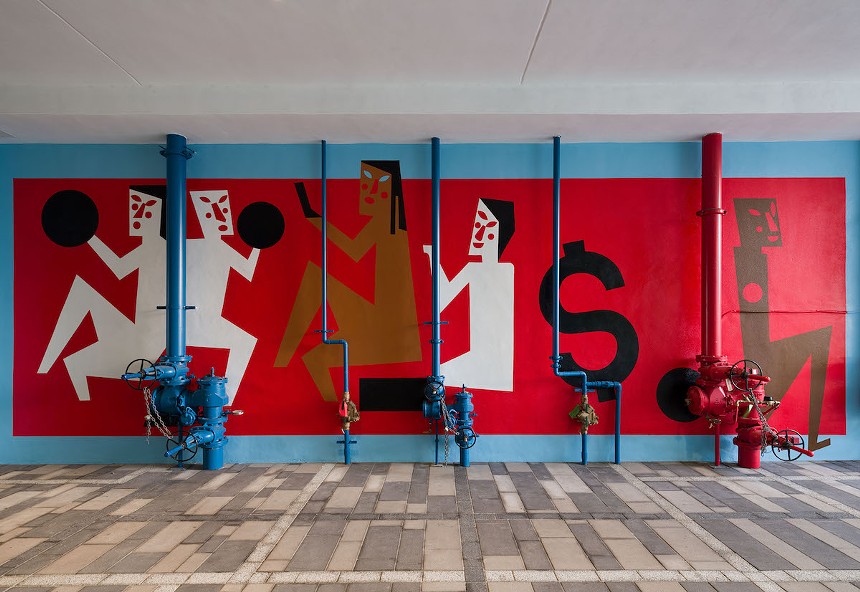 Jeffrey Deitch describes Nina Chanel Abney’s mural as one of the most ambitious public artworks in recent times.
Photo by Oriol Tarridas
In addition to Abney, Miami-born sculptor Woody De Othello, Miami-raised artist Viktor El-Saieh, sculptor Nick Cave (not to be confused with the rock musician of the same name), and Texas-based artist Trenton Doyle Hancock have been announced as part of this program. Two to three more artists may sign on before the end of the year.

The overarching theme that ties the artists together is that all the works are figurative.

“Most public sculptures or public murals tend to be more abstract,” Deitch says. “There’s been a strong revival of figurative art so we thought it was very timely to go with this theme and we also wanted the art to be relatable to a broad public. And we thought that figuration would be more engaging, more welcoming.”

While the type of art was a crucial part of the narrative created by Deitch and the curatorial team at Primary, having the works connect to the Magic City in some way was also a vital component.

"When selecting the artists, the first thing we looked at was that the artist's work was figurative by definition,” says Books Bischof, one-third of the team at Primary. “And if they weren't from Miami or connected to Miami in some capacity, we asked them to consider Miami's history when conceptualizing their commissioned piece."

Bischof, who runs Primary with partners Christina Gonzalez and Typoe Gran, tells New Times how this project is an opportunity for everyone to engage with outstanding public art. He relays the story of being a kid passing through the Fort Lauderdale airport and seeing a piece by sculptor Duane Hanson.

“At the time, I didn't know who Duane Hanson was; quite possibly many people [traveling through the airport] didn't know who he was either," Bischof says. "I remember this mob of travelers surrounding the glass box, enamored by his hyperrealism.”

Similarly, this project with Miami Worldcenter “is a moment for those same passersby to begin a romantic relationship with contemporary art at any point on their daily commute or en route to dinner. That, for me, is magical."
KEEP MIAMI NEW TIMES FREE... Since we started Miami New Times, it has been defined as the free, independent voice of Miami, and we'd like to keep it that way. With local media under siege, it's more important than ever for us to rally support behind funding our local journalism. You can help by participating in our "I Support" program, allowing us to keep offering readers access to our incisive coverage of local news, food and culture with no paywalls.
Make a one-time donation today for as little as $1.