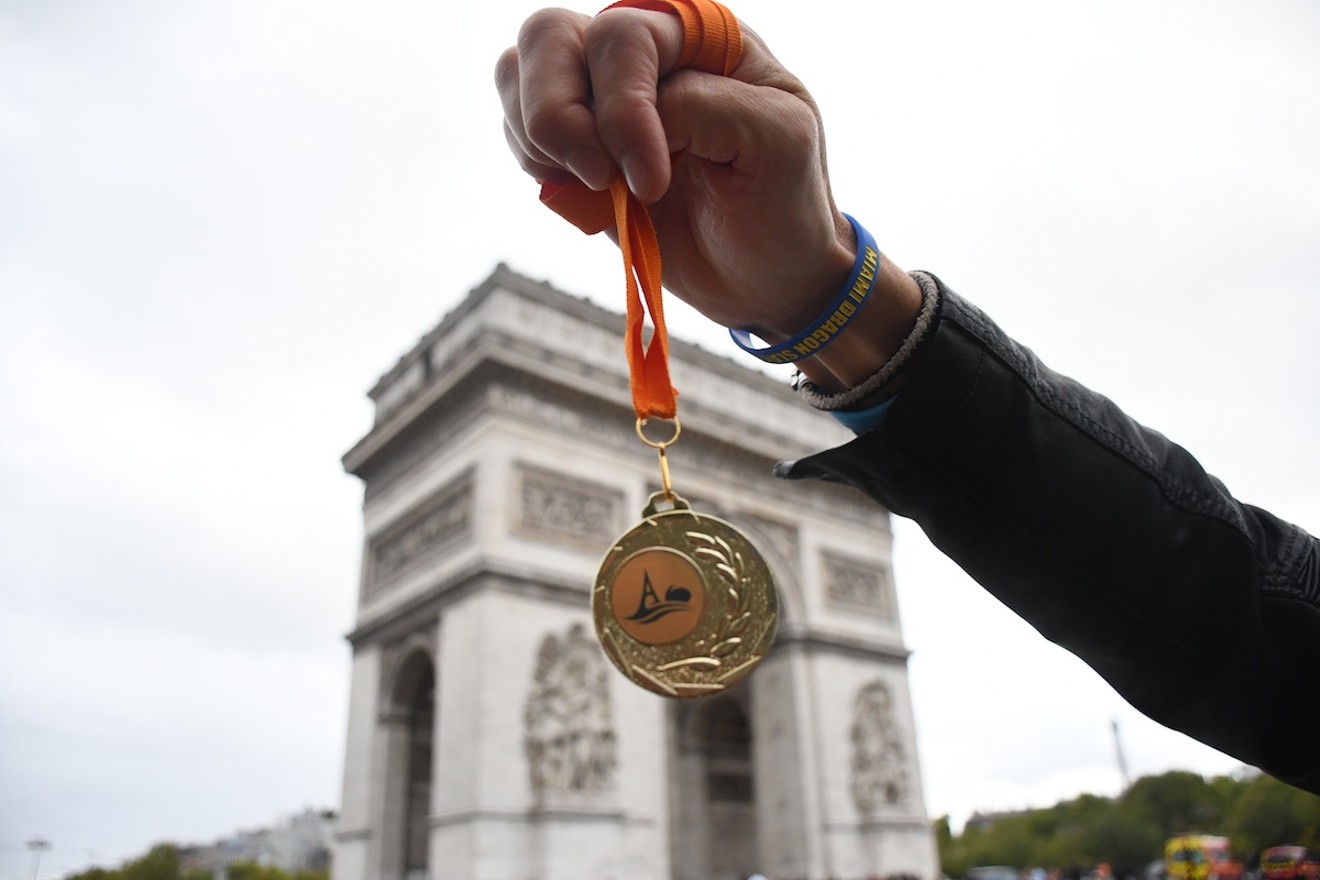 Photo by Dan Evans
As we paddled past the Eiffel Tower for the second time, a cold late-September rain commenced to come at us sideways. My left butt cheek stung — as though le derrière had been attacked by a hundred bees — but at least it was diverting my attention from the cries of protest from my arms, shoulders, and lungs.

"I know you’re tired and your ass hurts!” Harry Schelmety, our coach and steersman, hollered from the stern of our craft. "I don’t care. Paddle, dammit!"

To my right, Hector Cordero grimaced, sucked down the rest of an energy gel, and soldiered on.

The Miami Dragon Slayers, the sole U.S. entry, had traveled to Paris to take part in La TraverSeine, an annual dragon-boat race up and down the famed waterway. Instead of the usual length of such competitions — 300 to 500 meters — the TraverSeine course is a ridiculous 26 kilometers (a little more than 16 miles), about the distance from Key Biscayne to Hollywood.

For the past six months, we'd been training two or three times a week at the Miami Rowing Center on Virginia Key to build our endurance in the brutal South Florida sun. We were strong, we were ready for competition, and we were freezing our asses off.

A dragon boat is a narrow craft about 40 feet long that accommodates a crew of either ten or 20, plus a steersperson at the stern and sometimes a drummer at the bow. Crew members sit side-by-side on wooden benches and paddle like deranged blenders for the length of the race. In Paris, we had ten men, ten women, and a steersman, but no drummer.

Photo by Dan Evans
Dragon boating has been around for millennia. According to the International Dragon Boat Federation, the sport began in China some 2,000 years ago as a way of honoring a man, Qu Yuan, who killed himself after being falsely accused of treason. Local fishermen raced their boats to recover his body before it could be eaten by fish — which led to a reenactment, which turned into an annual festival and, ultimately, a sport.
You might think Miami, with an Asian population of about 1 percent according to recent U.S. Census figures, would have little interest in such a pastime. Yet Miami-Dade and Broward Counties are home to at least five teams. The sport is particularly popular among breast cancer survivors; the SOS team (AKA Save Our Sisters) practices on Virginia Key alongside the Dragon Slayers.

In Paris this year, the race began at daybreak September 29 just outside the city limits, near the Boulogne-Billancourt neighborhood. The course took teams to Île de la Cité, where they turned and headed back to the start. There were 54 entries: kayaks, stand-up paddleboards, and canoes, along with the dragon boats. Another 300 or so participated n a 15-kilometer combo race and leisure float that began near the halfway point.

The Eiffel Tower, that symbol of all things French, stood around the quarter-mark out and three-quarter-mark in, making its second coming near the 20-kilometer mark. The first passing, just after sunrise, was an almost mystical experience. The way back — with 55-degree temps, wind, and rain pelting us horizontally — was utter misery.

Despite the pain and a momentary fear of seeing my predawn breakfast of off-brand Nutella and poundcake again, the Slayers pushed through the last six kilometers and hit the finish line at 2:34:50 — ten minutes ahead of the next dragon crew. As we finished, French fighter jets streamed red, white, and blue overhead, honoring former President Jacques Chirac, who had died earlier in the week.

The gold was ours!

Faces red, lips numb, and teeth chattering, we half-walked, half-stumbled toward the modernist two-story building that served as race headquarters, luring us with the promise of coffee and hot showers upstairs. 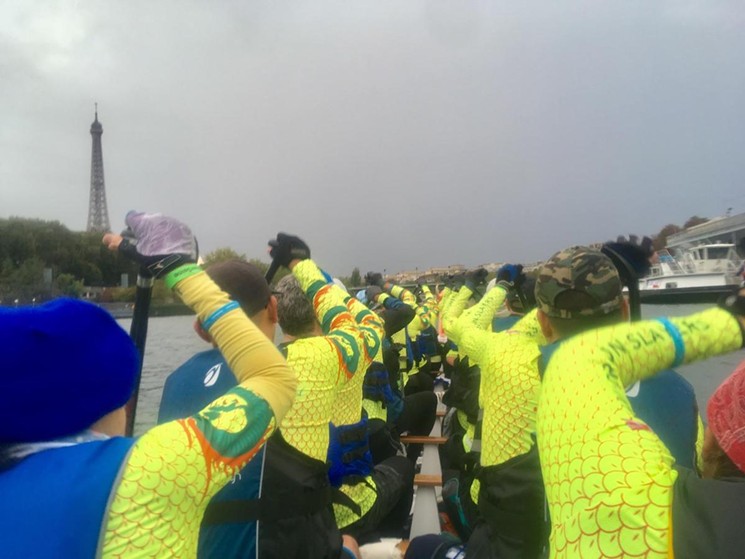 Photo by Jenny Gattinger
Twenty minutes later, I sat, warm and dry, in the men’s locker room. The steam and the overlapping babble of conversations in multiple languages hypnotized me.

It was then that I heard my crewmate Lou Benito, who was in the shower, crying. I looked over at Michael Chau, the man who'd gotten us into this insanity after talking to a Parisian dragon-boat team earlier in the year. We laughed, convinced it was just Lou being Lou: passionate and competitive to the core.

Texting me later, Lou confided he'd been overcome with emotion at the thought the Dragon Slayers had come into his life when he most needed it. The past year had been particularly tough, owing to a divorce and uncertainty about where he would live. 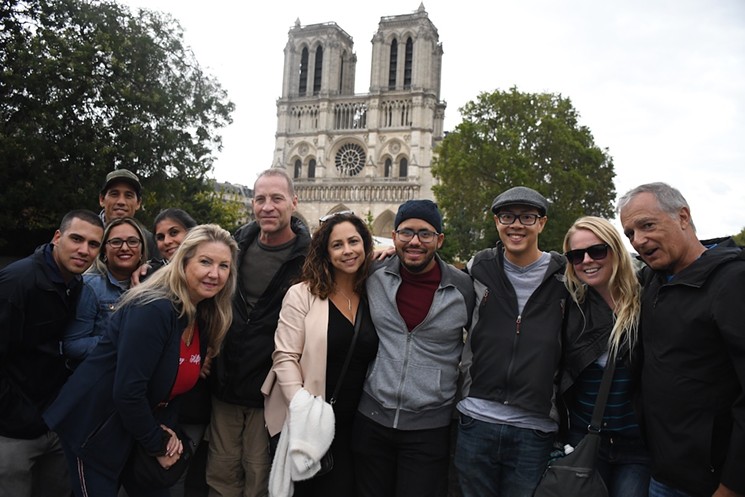 Photo by Dan Evans
“I got emotional cuz you/this team is built with grit, non-stop dedication and REAL unconditional love for all,” he texted. “It was the perfect time in my life to be welcomed into a team of this caliber.”

In a sense, it was the perfect time for us all. More than half the members of our group — probably closer to 90 percent — were born outside of the United States. We make a living in all sorts of ways: technology, education, medicine, blue-collar. Nearly all of us could be considered Type A personalities, but we make it work.

And that day in France, we were champions.
KEEP MIAMI NEW TIMES FREE... Since we started Miami New Times, it has been defined as the free, independent voice of Miami, and we'd like to keep it that way. With local media under siege, it's more important than ever for us to rally support behind funding our local journalism. You can help by participating in our "I Support" program, allowing us to keep offering readers access to our incisive coverage of local news, food and culture with no paywalls.
Make a one-time donation today for as little as $1.