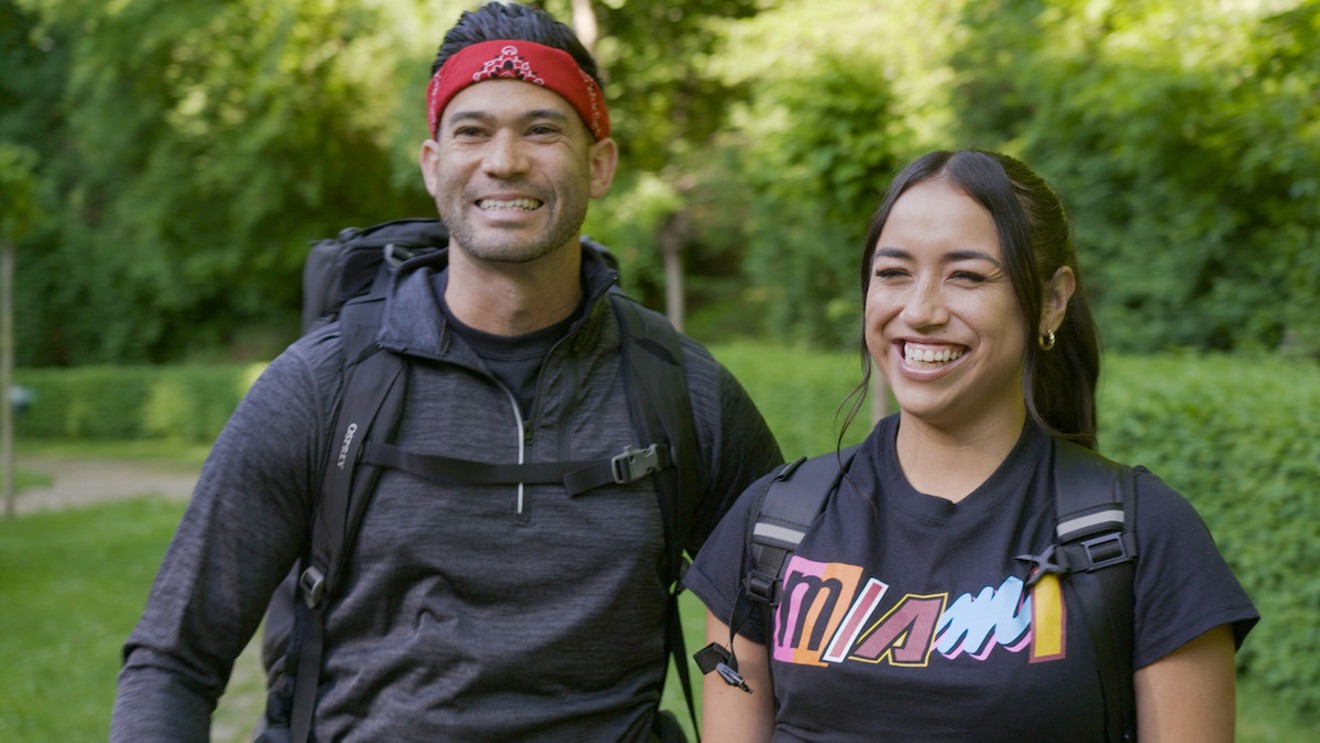 Luis Colon (left) and Michelle Burgos Photo courtesy of CBS Entertainment
Michelle Burgos and Luis Colon are making for stiff competition in the latest season of The Amazing Race — and they couldn't be more Miami.

Burgos, a retired professional dancer for Pitbull and the Miami Heat, and her husband, Colon, a firefighter, have brought their Kendall savviness on the trek across the globe with a prize of $1 million on the line. If they win, it will be the first time in 34 seasons The Amazing Race has crowned a team made up entirely of Latinos — Burgos is Colombian-Peruvian, and Colon is Colombian-Puerto Rican.

"Usually, it's a superpower to be a dancer, and as a firefighter, there's strength involved," Burgos says. "But this show has so much variance. It forces you to use random skills you never thought you'd need."

The reality TV competition follows 12 teams on a trek through Austria, Italy, France, Spain, Iceland, and Jordan as they face obstacles on a race to the finish line in Tennessee. To move forward in the competition, teams must use an archaic form of navigation — some may even call it prehistoric — a paper map.

Teams receive a different map at each checkpoint, which Burgos says made it impossible to memorize routes ahead of time.

"Even if we try to practice reading the map after we're done for the day, we get there in good timing, but we don't get there the fastest," Burgos notes.

This has proved almost as grueling as the individual challenges themselves — such as when they had to build a motorcycle, break a block of ice, and learn the Arabic alphabet, to name a few.

Luis Colon is used to high-pressure situations at his job as a firefighter.
Photo courtesy of CBS Entertainment
"We had a premiere party, and I told guests, 'Hey, don't give me shit about getting lost on The Amazing Race because half of you got lost here in Miami while using Google Maps,'" Colon says jokingly.

However, Burgos' decade of international tours with Mr. Worldwide came in clutch. She was already familiar with a few locations in the race, such as the first stop in Munich.

Burgos' passion for dance started around age 7. She would eventually go on to dance for Britney Spears, perform as part of the Miami Heat dance team, and compete on Fox's So You Think You Can Dance? and MTV's America's Best Dance Crew.

"I've never had a normal job. All my life, I've just danced, which is an incredible experience," Burgos says. "It was tough at first because people used to tell me that I wasn't the strongest one or I wasn't the skinniest, but I made it through, and here I am now, full-on dancing all these years."

While Burgos has performed in front of thousands, the pressure was on during The Amazing Race.

"When they have that camera on you during the race, and it's for a million bucks, [people] crumble," she tells New Times. "I used to get nervous at the beginning of every show."

Luis Colon (left) and Michelle Burgos say the maps are the biggest challenge on The Amazing Race.
Photo courtesy of CBS Entertainment
But with more than 12 years of fire-rescue experience under his belt, Colon is no stranger to high-pressure situations.

"If I'm in the back of a truck with somebody dying in our rescue, I always like to calm people down in those tense cases," he emphasizes. "That's something that you can't duplicate, but I think it's one of the biggest qualities we have."

Colon admits he was a fan of his wife before they even met.

"I watched her on MTV and was like, 'Damn, that girl is beautiful,'" Colon says. "I tried to hit her up on Facebook and MySpace, but our conversations didn't go anywhere."

Now 13 years strong, the couple heads into episode four among the remaining ten teams. The next episode airs on Wednesday, October 12 at 10 p.m. on CBS.

If they win, the couple plans to divvy the cash prize between their parents and church and start a family of their own.

"Our parents sacrificed so much to give us the lives we have, and we love our God," Burgos says. "So how great would it be to win The Amazing Race and just be well established for our future family?"

The Amazing Race airs Wednesdays at 10 p.m. on CBS and is available to stream via Paramount+.
KEEP MIAMI NEW TIMES FREE... Since we started Miami New Times, it has been defined as the free, independent voice of Miami, and we'd like to keep it that way. With local media under siege, it's more important than ever for us to rally support behind funding our local journalism. You can help by participating in our "I Support" program, allowing us to keep offering readers access to our incisive coverage of local news, food and culture with no paywalls.
Make a one-time donation today for as little as $1.