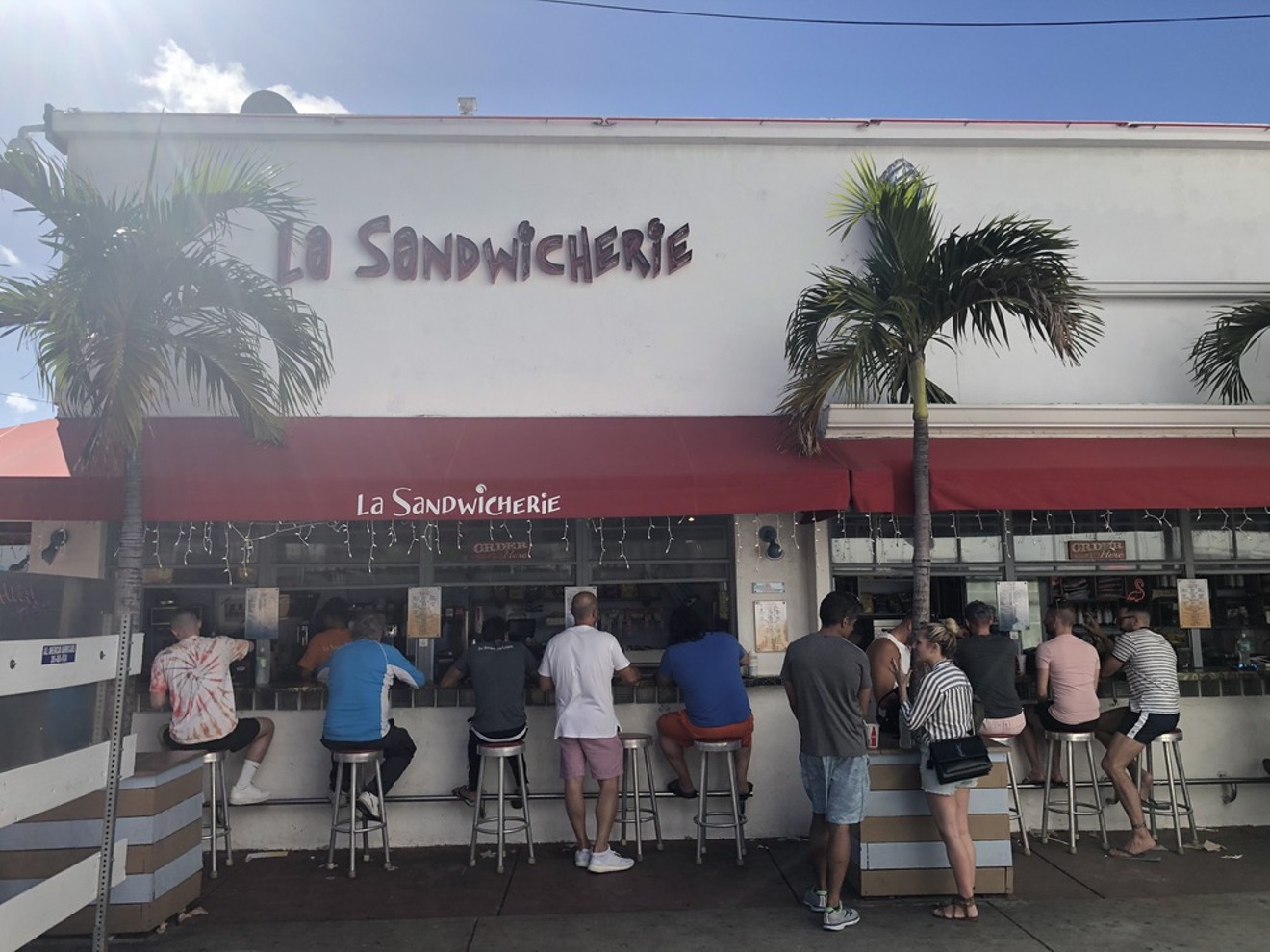 Customers sneak in a bite at La Sandwicherie amid the coronavirus crisis. Photo by Cata Balzano
As many Miami Beach institutions are learning, owning and operating a business in a tourist-heavy area during a global pandemic means making hard decisions day by day.

Giovanni Gagliardi understands that fact better than he'd like. As the owner of La Leggenda Pizzeria — one of Española Way’s most popular Italian restaurants — Gagliardi found himself fretting over the weekend about not only the slowdown in traffic that'll ensue once spring breakers leave Miami Beach but also the measures he'll need to take to keep his family-owned business afloat while complying with rules imposed by the City of Miami Beach to limit the spread of the novel coronavirus.

“I have 20 employees, and I don't want to go into panic mode, so I’m rearranging the schedules," Gagliardi tells New Times. "They will work less hours, but they each get a good chunk of work done. So though we are working less, we are still up and running, and I’ll be able to pay them.”

The effects of COVID-19 on La Leggenda will likely extend beyond the immediate health concerns and the economic impact of the city's response. Now that Italy’s borders are closed because of the outbreak, Gagliardi — who imports the majority of products from his native country — is also running out of produce to prepare many of the dishes on the menu.

“This is a typical Neapolitan pizzeria,” says Gagliardi, holding a bag of fresh buffalo mozzarella imported from Naples just a few weeks ago. “My restaurant is known for the high quality of the authentic Italian products that I use, and I will continue to only use them. Therefore, when products run out, I have no choice but to change the menu." La Leggenda Pizzeria owner Giovanni Gagliardi
Photo by Cata Balzano
This past Tuesday morning, Miami-Dade County announced that all nonessential businesses, including restaurants, bars, and dining rooms, must close in order to foster social distancing and curb the spread of the virus. Gagliardi tells New Times he perceived an uptick in takeout and delivery orders even before they became Miami restaurants' only means of business.

“Since it’s spring break, you still get some traffic and people, but within the area as a whole, it is starting to become more noticeable,” he says, noticing a rise in orders through online services such as UberEats and Slice. "I'm also complying with all the opening and closing times according to what the City of Miami Beach requires.”

The county's decision was made in an effort to strengthen the existing recommended precautions.


"Coronavirus is like a mean dog: You acknowledge it, and you just have to stay away from it."

“Our presence as a hospitality destination just doesn’t work when you’re trying to practice social distancing," Mayor Dan Gelber said during a press conference this past Sunday. "We can’t have the kinds of crowds we’ve had... We can’t have a spring break the way it has happened. We cannot become a petri dish for a very dangerous virus.

“I walked down Ocean Drive yesterday, and what I saw was incredibly disturbing," he added. "It wasn’t just the typical large gatherings of people, but it was young people who believe they’re invincible and probably don’t think about this in any way as a health crisis.”

City officials made clear there would be legal repercussions for those who flout the new rules, such as the 11 p.m.-to-5 a.m. curfew for the entertainment district.

Miami Beach’s chief deputy city attorney, Aleksandr Boksner, provided a statement to New Times stressing that criminal penalties for such violations may include imprisonment for up to 60 days and a $500 fine. 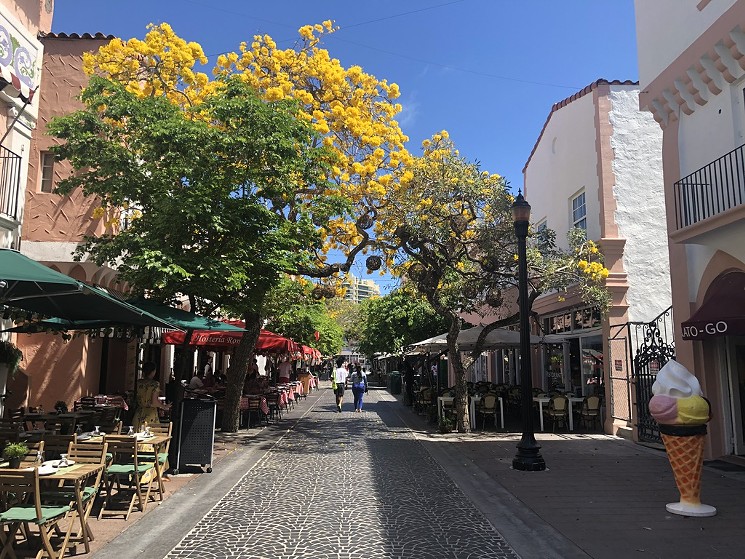 A nearly deserted Española Way
Photo by Cata Balzano
La Leggenda, like many Miami restaurants, is reorienting itself to prepare food solely for delivery orders. T. Bernie, a resident of downtown Miami, eats out at least three times a week and believes that such steps will be necessary both for residents accustomed to eating out and the businesses themselves.

“I don’t cook a lot, and because I am a foodie, I’m out at restaurants all the time. I don’t feel as comfortable being out right now,” says Bernie, who spent this past Sunday afternoon in South Beach after realizing it would be only a matter of time before she would not be able to leave her home. “I started having future visions of cabin fever, and with more lockdown and parameters being set every day, I was like, Let me go out and enjoy it while I can.”

Anyone strolling around Miami Beach this past weekend might have assumed a global pandemic with a rising number of South Florida cases wasn’t a subject worth worrying about. The sun was beaming, parking lots were full, and a disconcerting number of bars and restaurants remained packed.  Meanwhile, the iconic sight of shirtless tourists and cruising motorcycles remained omnipresent on Ocean Drive, almost as though nothing had changed since the viral nature and threat of the novel coronavirus became fully understood.

Khadim Hanne, a New Yorker who arrived in Florida last Friday for a two-day business trip, stopped by La Sandwicherie on Sunday for lunch.

Hanne, who works as a promoter, remained optimistic about the COVID-19 crisis.

“I have the mindset that if it’s meant to happen to you, it’s going to come to you anyway. That way, you can be free,” Hanne says while holding a croissant sandwich. “You do have to respect it, take precautions, and stay clean. It’s like a mean dog: You acknowledge it, and you just have to stay away from it.”

Businesses are responding in kind to the social distancing recommendations and existential threat, but only time will tell if customers follow suit.
KEEP MIAMI NEW TIMES FREE... Since we started Miami New Times, it has been defined as the free, independent voice of Miami, and we'd like to keep it that way. With local media under siege, it's more important than ever for us to rally support behind funding our local journalism. You can help by participating in our "I Support" program, allowing us to keep offering readers access to our incisive coverage of local news, food and culture with no paywalls.
Make a one-time donation today for as little as $1.