In "A Reflection of the Times," Artist Chire Regans Advocates for the Voiceless 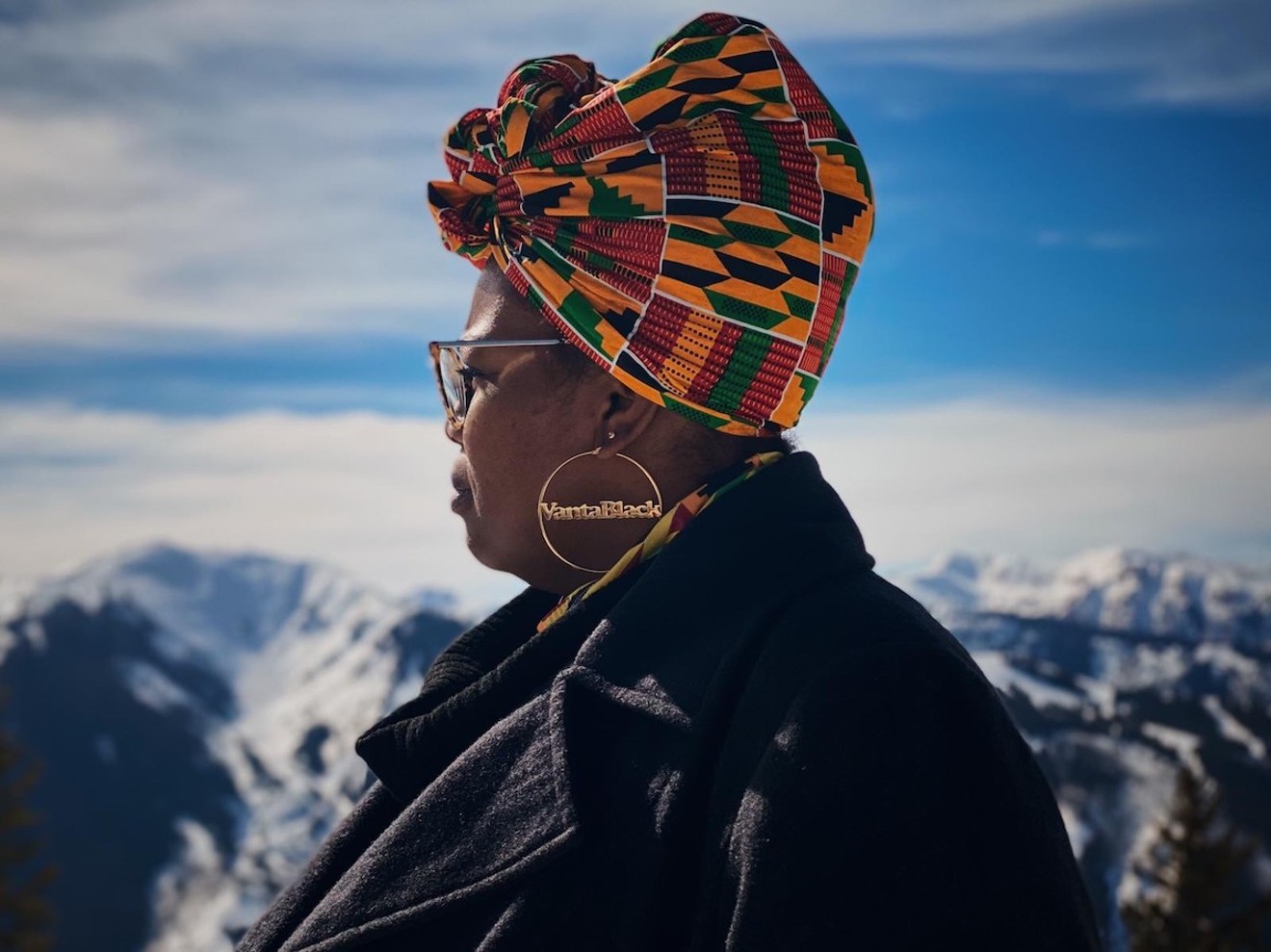 Artist Chire Regans, who also goes by the street name VantaBlack. Photo by Jayme Gershen
Soft pink and blue hues swirl in the sky over the Bakehouse Art Complex in Wynwood. As the sun begins to set, an intimate crowd comes together for the opening of artist Chire Regans’ latest exhibit. Titled “A Reflection of the Times,” the exhibit features 100 portraits of gun-violence victims.

The show, on view through November 1, was commissioned by Commissioner in partnership with the New World School of the Arts and curated by Women Artists Archive Miami.

The artist, fittingly wearing a T-shirt that sports the phrase “Black Women VS Everybody,” greets familiar faces with a warm embrace. As members of the art and advocacy communities gather and exchange pleasantries, an older woman sits calmly and quietly to the side. Her magnificent silver hair is like a soft mist over tall mountains in winter. Something about her manifests a sense of peace.

Before the group passes the dozens of studio doors and walks into the exhibition space, a special spoken-word performance by Sirena Saul takes place. Speaking from deep within her soul, Saul shares her personal experience with gun violence. Isaiah Solomon, her 15-year-old son, was struck by a stray bullet and died. He was leaving a family member’s house and on his way home. In two months, he would have turned 16.

Then Regans addresses the crowd and asks for someone in particular to join her. The silver-haired woman emerges from the back of the room. “This is Mrs. Ann,” says the artist, visibly fighting back the tears. “And she’s the mother of the first person I’ve ever loved outside of my family.”

Ann Griggs Anderson is the mother of James Reid III, who was shot and killed in 1996. He was 19. 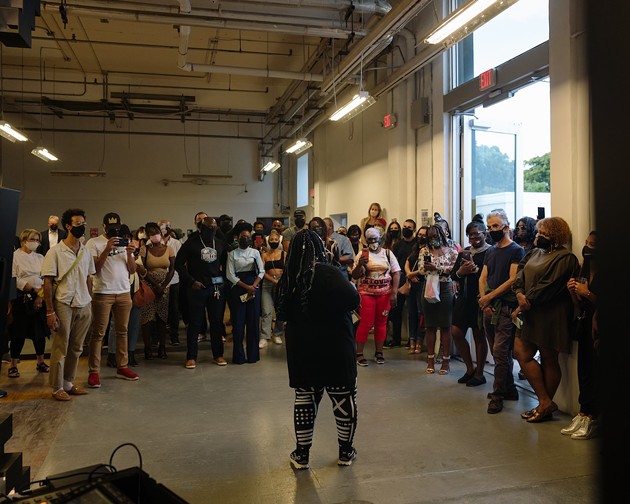 Chire Regans speaking to the crowd gathered at the open of "A Reflection of the Times."
Photo by Gesi Schilling courtesy of Commissioner
The death of James Reid was the first time Regans personally experienced a loss at the hands of gun violence — but it wouldn’t be the last. She has since lost two cousins, Darrell and Patrick Smith, whose portraits are part of the exhibit.

“I’m telling my personal story [too],” Regans tells New Times later in the evening. “I don’t want to be voyeuristic. I have to start from me. I've been affected by gun violence, so I have to tell that story also and treat the other stories with the same care.”

Regans, who graduated from New World School of the Arts before earning a degree in visual and performing arts at Florida A&M University, started her portraiture project in 2016. After the death of King Carter, a boy from northwest Miami, she felt compelled to channel her emotions into art.

Instead of yelling into a void, she picked up a pencil.

“Artists have a responsibility to reflect what’s going on in the world,” says Regans, adding how the inspiration for the exhibit’s title came from an old Nina Simone quote.

“[Nina] says that her responsibility as an artist is to reflect the times, and if you don’t, you can’t call yourself an artist. I truly believe that it’s an artist’s duty to depict what’s happening around them," she explains. "We play an important part in the community, and if an artist isn’t being honest about what’s happening, then what are you doing?”

Acknowledging that her work comes with an unspeakable weight, she's quick to point out that it’s nothing compared to that carried by families who've lost a loved one to gun violence.

The stories of every face she draws stay with her. The conversations with family members replay in her mind as she creates. Although she is the one releasing her emotions onto the page, the experience is cathartic for both the artist and the families of her subjects. 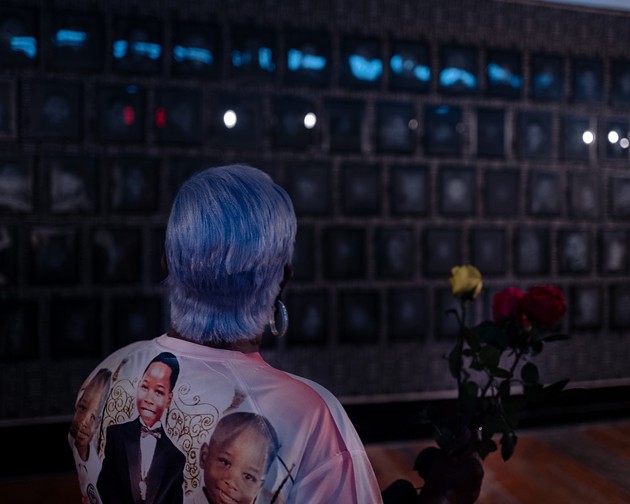 Tanya Young Fincher, mother of Desmond Fincher, who was gunned down outside a grocery store in 2005.
Photo by Gesi Schilling courtesy of Commissioner
“I want people to know that this person is more than what happened to them,” she says, then pauses as a plane passes overhead. “And that everyone who loved this person is affected by them not being here anymore.”

At the intimate reception ahead of the exhibit’s official opening, people who have been personally affected by gun violence were in attendance. Some of them related to the faces hanging on the wall, like Tanya Young Fincher, mother of Desmond Fincher, who was gunned down outside a grocery store in 2005. Another mother drove down from West Palm Beach to see the portrait of her son, Tinoris Williams.

Over the past five years, Regans has drawn over 250 portraits, many of which she’s given away to grieving families.

For “A Reflection of the Times,” the artist narrowed down the body of work to 100 portraits, focusing heavily on victims from South Florida as well as highly reported national cases. The choice to exhibit exactly one hundred portraits was intentional: Each day, an average of 100 lives are lost to gun violence.

From the wall, the faces of George Floyd, Dale Graham, Breonna Taylor, Trayvon Martin, Israel Hernandez, Samantha Murphy, Michael Brown, and 93 others smile down at you. Their essence is frozen in time, in a moment they'll never get to relive.

“I want people to understand that this is happening,” Regans says. “It’s happening to people around you. And there’s something that you can do about it.”

After you’ve let yourself get lost in the work, lost in the faces, and have engaged with the art, it’s time to take action. Accompanying the exhibit is a website that includes all 100 names and links to resources that invite you to get involved.

“I want you to engage with the work and then look within yourself and decide what you can do about it," Regans explains. "There’s always something that people can do, and sometimes they don’t know where to start.” 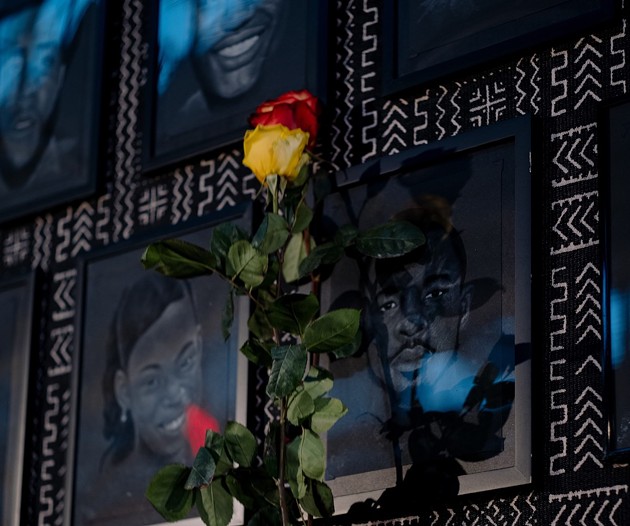 Portraits hang on the walls for Chire Regans' "A Reflection of the Times."
Photo by Gesi Schilling courtesy of Commissioner
Bakehouse isn’t the only place you can see Regans’ work. On the corner of NW Sixth Avenue and 32nd Street, just outside the complex, the artist has painted a mural that spans more than one city block. Painted in white are the names of 547 victims of gun violence.

Regans says that during the six months it took to complete the mural, people would drive by and tell her their own personal stories, prompting her to add more names to the wall. Some people would list up to three names of those they intimately knew who succumbed to gun violence.

“In all these conversations I've had with families, they just want support,” Regans says. “They want to be seen, and they want their loved ones to be remembered, because whatever life this person lived, they’re gone. And everyone that loved that person is affected. We’re all affected.”

“A Reflection of the Times,” by Chire Regans. On view through November 1, at the Bakehouse Art Complex, 561 NW 32nd St., Miami; 305-576-2828; bacfl.org. Admission is free.
KEEP MIAMI NEW TIMES FREE... Since we started Miami New Times, it has been defined as the free, independent voice of Miami, and we'd like to keep it that way. With local media under siege, it's more important than ever for us to rally support behind funding our local journalism. You can help by participating in our "I Support" program, allowing us to keep offering readers access to our incisive coverage of local news, food and culture with no paywalls.
Make a one-time donation today for as little as $1.