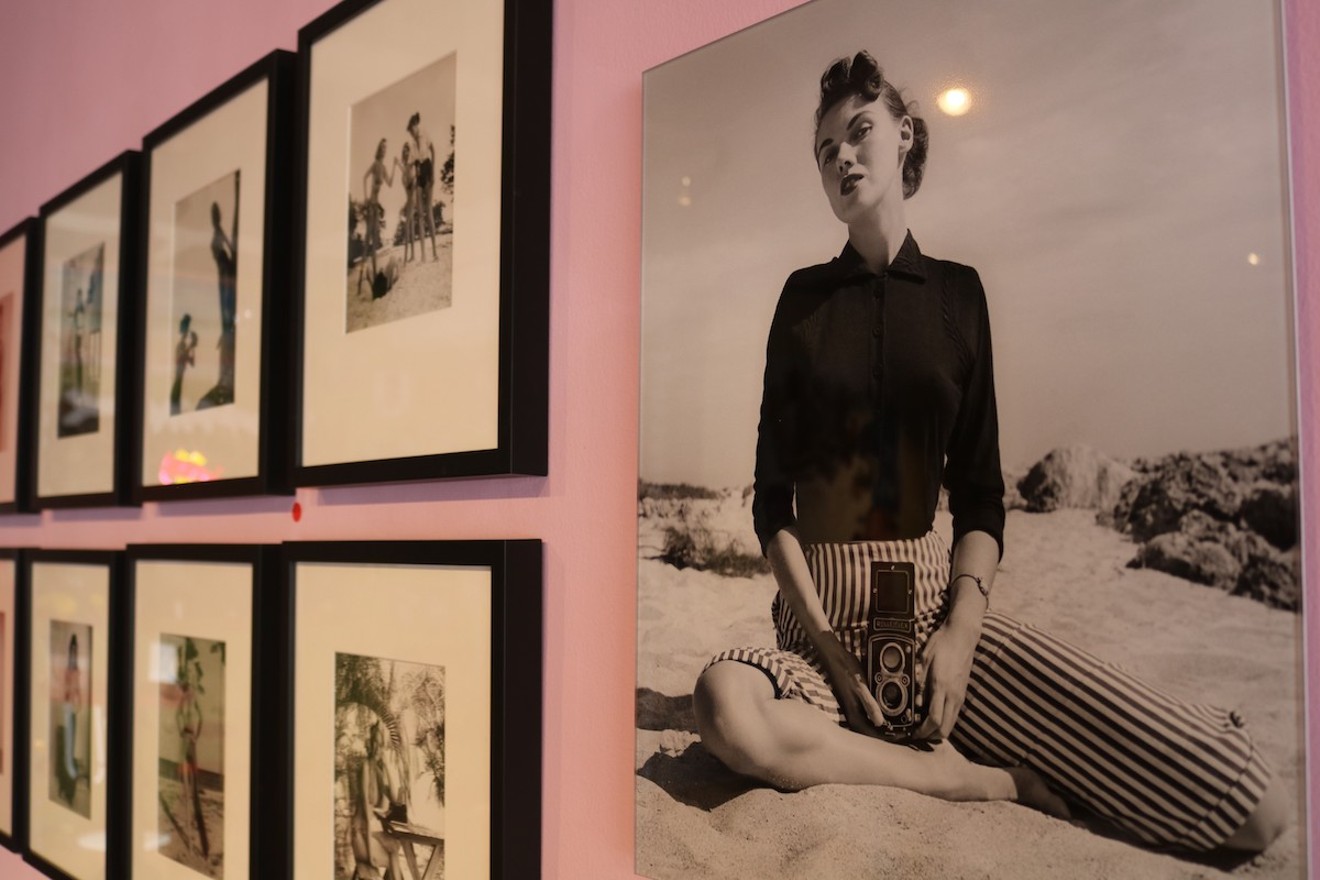 Self-portrait of Bunny Yeager. Photo by Alexandra Martinez
In 1954, up-and-coming photographer Bunny Yeager got a call from then-unknown model Bettie Page. The influential pinup girl was about to take a vacation in Miami, where Yeager lived, and Page wanted her to take her picture. Yeager had already made a name for herself as the most photographed model in Miami, but her career as a photographer was beginning to ascend after her shot of Maria Stinger landed on the cover of Eye magazine.

After Page arrived in Miami, the two drove to Africa USA, a safari theme park in Boca Raton. Wandering in a Jeep, the artists flaunted their fearlessness among tamed wild animals and snapped the now-iconic photos of Page posing between two cheetahs. It was clear once the two women met that all bets were off: Yeager had unleashed Page's animalistic side, and popular depictions of female eroticism would never be the same.

Yeager's raw portraits of Page, similarly tongue-in-cheek self-portraiture, and illuminating ephemera from her legendary career are now on view at Swampspace Gallery in the Design District as a part of the show "3 Graces: Naughty Then & Now." The show positions Yeager, who passed away in 2014, and her career-defining work alongside contemporary visual artists Eurydice Kamvyselli and Kitty Brophy. Both Brophy and Eurydice confront the male gaze in an attempt to liberate the female experience in a city that is ultraconservative yet aesthetically liberal. 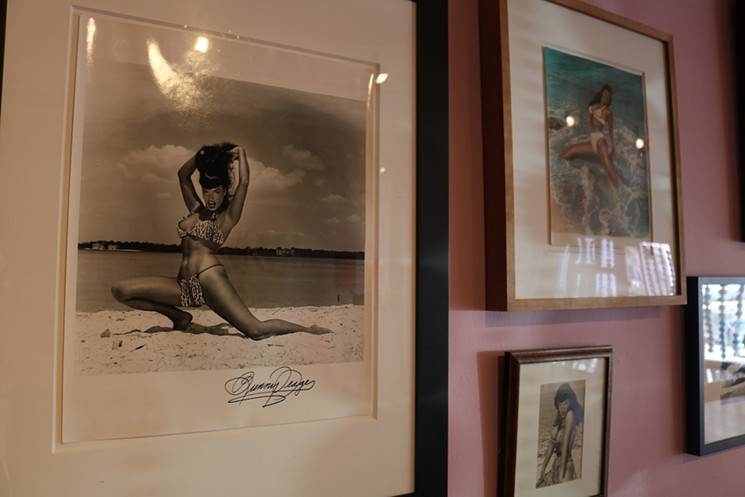 Bunny Yeager's photos of Bettie Page.
Photo by Alexandra Martinez
Local artist, writer, and podcast host Eurydice first saw the iconic cheetah photos about 30 years ago. A lifelong collector of pinup photos, she frequently uses them in her work and often looks at them for hours at a time for both inspiration and collaging. But it wasn't until she moved to Miami from New York City in 2001 and began working in her studio at ArtCenter/South Florida on Lincoln Road that local collectors and artists mentioned Yeager as an "art sister."

"The work is in your face — Bunny with a camera on her vagina, it's the phallus, the male gaze, that’s right in your face," says Eurydice, referring to a self-portrait of Yeager. "The cheetah print, half-nude with the actual cheetah there, she's referencing the female animalistic, wild desire which can take over the civilization that the male species has tried to create [in order to] control the female animal."

Eurydice's work is similarly direct in its intent to confront the patriarchy. Her fiber work juxtaposes the centuries-old female tradition of embroidery with shocking modern-day renditions of female sexuality.

"My grandma sat me at her loom as a toddler," Eurydice says. "My mom and grandma sat on the balcony or porch or living room every afternoon to stitch and talk. I had no choice in this. It was a woman’s domestic education. I was taught a dozen different stitches and in the process was taught how to think about life during the daily conversations that took place while we stitched." 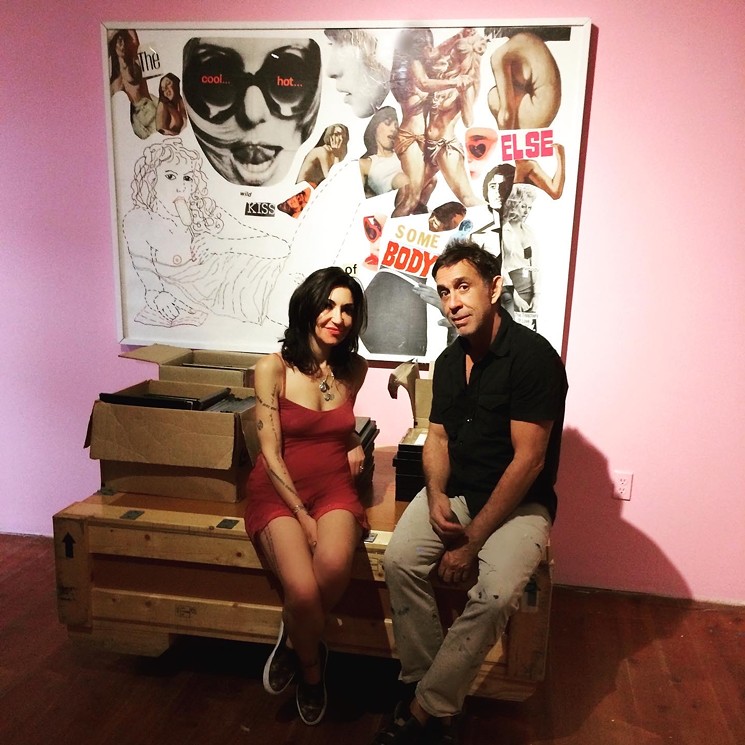 Artist Eurydice and Swampspace gallery owner Oliver Sanchez sit in front of her The Cool Hot Wet Kiss of Somebody Else
Courtesy of Eurydice
"Instead of hiding, it's bringing everything that is most hidden in your subconscious: desires [and] fantasies," Eurydice says. "It's all about turning it around and bringing out what is unspoken, suppressed. The element of danger is alive and well, that if we were not so dangerous to the patriarchy, the patriarchy wouldn’t exist."

Artist and former model Kitty Brophy's ink and gouache work similarly deploys stark imagery of a monochrome female body to portray female sexuality and power. Brophy studied visual art at the Parsons School of Design in New York City, but her male professor's lack of encouragement regarding her sexually charged line drawings of females led her to drop out and pursue her burgeoning modeling career. At the time, she was dating painter Kenny Scharf and running in the Club 57 circle with Keith Haring, where her connections led her to fashion editorial work in Paris.

"I always considered myself a feminist and liberated, but that doesn't always mean the world is ready for that," Brophy says. "It was very different being a woman artist. I made these beautiful little introspective ink drawings, and some of them were unusual and strange, and I really didn't know how to promote myself. In art school, the teachers didn't like my work at all. Women were barely in art history in 1978 even though there were so many wonderful female artists in the '50s, '60s, and '70s. I didn't have any female teachers; I didn't have any mentors. This idea that I had as a teenager of going to New York and [becoming] an artist... just didn't translate into the real world."

Paris proved to be less glamorous than she had expected. After years of sexism as a model in '80s Paris and New York, Brophy felt demoralized and decided to leave modeling behind and concentrate on her art.

"In Paris, I was a beautiful young girl, and I was treated as a commodity," Brophy says. "Now, with the #MeToo movement, a lot of horror stories have come out from men and women in the modeling industry, and I experienced all of that. It was horrible; it was incredibly degrading and demeaning, and it really added to my disillusionment because I had zero power. If you said anything to the agency, they would deem you difficult and never get you work again." 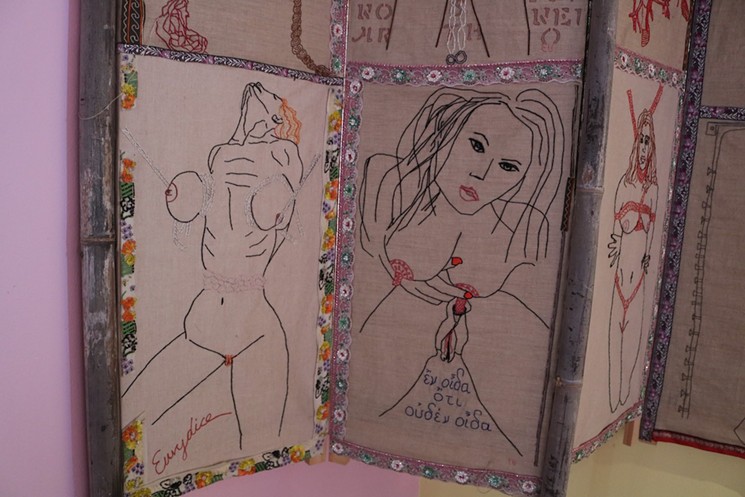 Closeup of Eurydice's Art Has No Future but Your Chains.
Photo by Alexandra Martinez
Today, Brophy takes photos of herself using her iPhone and tries to capture the conflict that modern women face internally and externally — the cognitive dissonance of existing in a patriarchal system that is still waiting to be reinvented.

In her time, Yeager used her photography to shatter glass ceilings and make a name for herself in a male-dominated industry.

"No sooner do you break those ceilings than someone is cobbling them back up together," says Oliver Sanchez, owner and curator of Swampspace Gallery. "I was very serious about including the vitrine with the ephemera from Bunny's life, because it's the tangible stuff that gives you more of a complete picture of the person. Bunny was a hard-working businesswoman; I can just imagine her desk with the typewriter, [her] licking stamps."

The vitrine includes model-release paperwork, original magazine centerfolds, and letters. In one correspondence, she describes a 17-year-old's father being present during her test shoot.

"Another odd piece of the show is an audio clip of Bunny from an interview late in her life, talking about back in the 50s she learned the hard way that it was helpful to get written permission from husbands, boyfriends, and fathers of the girls," Sanchez says. "It's funny because she's talking about another time: When women were property of the men, all the authority rested on the husbands and boyfriends, and some of them were fine with it and others were not, so she had to get that clearance." 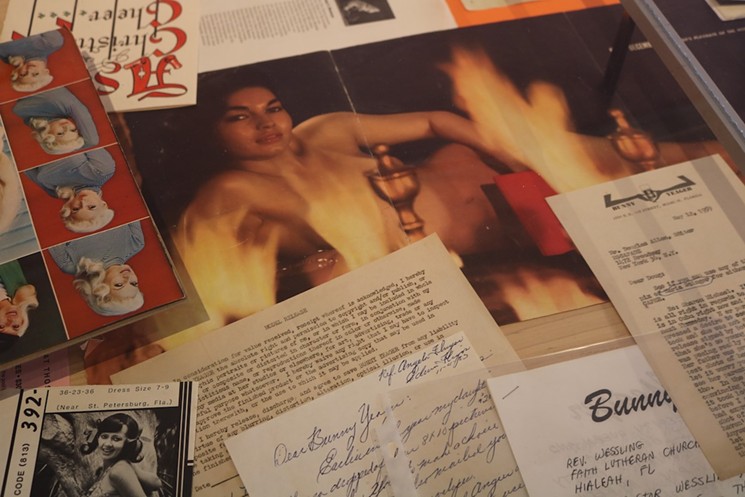 "In our mothers' and grandmothers' generations, it never occurred to anyone that you should get anyone off — the woman was there; she was lying there and taking it," Eurydice says. "We're teaching things in basic steps, but most men feel they need to please the woman — they know about the clit; they know about oral sex. That’s what that’s about. We’ve got that, and I'm out there saying we’ve achieved this. This is a mark in history, and I'm marking it because I don’t want us to lose it.

"We’ve scaled a huge mountain. It's like the picture of the guy on the moon — ‘I can make this and put it here.’ The tongue has reached the clitoris, and it can't go back."

The eve of Thanksgiving, just a week before thousands of tourists thirsty for gratifying images and hedonism descended upon the Magic City for Miami Art Week, Eurydice strolled down an almost empty NE 41st Street. She was heading to Swampspace Gallery, where her fiber and collage work from the past ten years is being displayed. But before she could make it to the end of the street, a bulbous neon-yellow vessel caught her eye. It was the Super Yacht Sub 3 at the luxury store the Arsenale. Intrigued by the shameless opulence, the artist searched the space but couldn’t find a single written description of this spaceship submarine. Finally, she approached a lackadaisical man, sitting on a couch against the wall, immersed in his laptop.

He grinned wildly and nodded his head in excitement. On her way out, she noticed a familiar image on the wall: the man on the moon.

"3 Graces: Naughty Then & Now." Through December 27 at Swampspace Gallery, 3940 N. Miami Ave., Miami; 305-710-8631; swampspace.blogspot.com. Admission is free.
KEEP MIAMI NEW TIMES FREE... Since we started Miami New Times, it has been defined as the free, independent voice of Miami, and we'd like to keep it that way. With local media under siege, it's more important than ever for us to rally support behind funding our local journalism. You can help by participating in our "I Support" program, allowing us to keep offering readers access to our incisive coverage of local news, food and culture with no paywalls.
Make a one-time donation today for as little as $1.