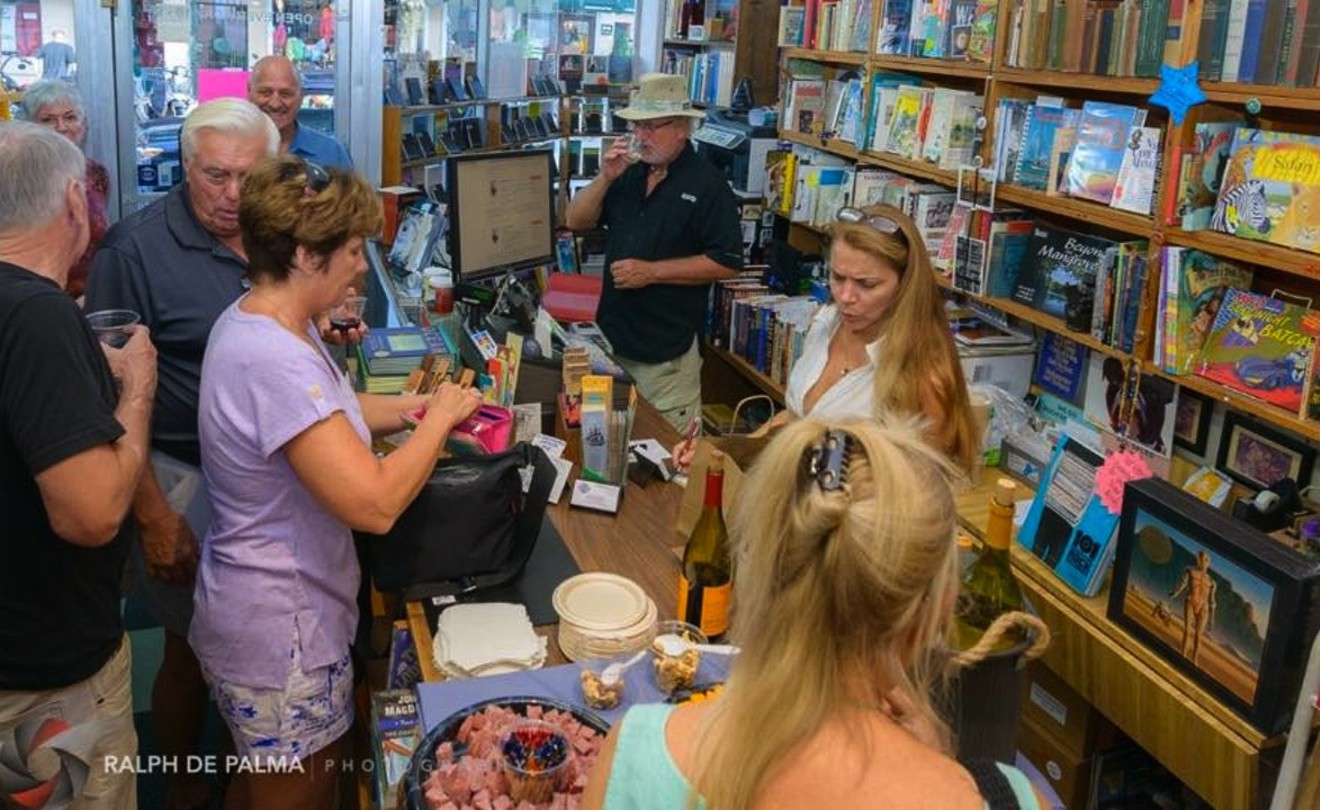 Ralph De Palma
Key West Island Books, independently owned and operated as a seller of new, used, and rare books since 1975, has become an institution in the Conch Republic for its vibrant author event series and glass-of-wine-when-you-walk-in familiarity. The bookstore is one of many small businesses attempting to rebuild after the intense damage caused by Hurricane Irma.

About a week ago, an unassuming GoFundMe campaign was created by Key West-based author (and incredible Wikipedia read) Christina Oxenberg, who is raising funds to buy a new air-conditioning unit for the island’s beloved bookstore.

Suzanne Orchard, the bookstore’s owner, had no idea Oxenberg had planned a fundraising campaign. “I didn’t even know Christina was putting up that GoFundMe page,” Orchard confesses.

The GoFundMe description cites not only the lack of air conditioning but also the loss of two weeks’ business and money services as issues that will affect every book lover on the island. Typical of small-town Key West business, a conversation between two friends quickly became a collaborative community effort to rebuild.

Orchard, a Pennsylvania native drawn to Key West 25 years ago by its serenity and personality, bought the bookstore from its previous owner, Marshall Smith, in 2015. Ten years earlier, in 2005, she had abandoned a far more lucrative bartending gig to work at the store full-time as a bookseller and later a manager when Smith passed away. Orchard’s favorite moments are when she recommends a book by any one of Key West’s authors to a snowbird who says, "I haven’t read a book in years, but now I’m on vacation. What should I read?"

Orchard’s bookstore is a branch of Key West’s deeply rooted literary tradition, where Ernest Hemingway, Tennessee Williams, Elizabeth Bishop, and others made their homes and gleaned inspiration for their work. Oxenberg and Orchard excitedly share that Hemingway’s grandson John has donated to their campaign. "Independent bookstores are the real backbone of any literate and well-informed country,” Oxenberg says he told her. “And being literate and well-informed are two of the pillars of democracy."

Regarding the extent of the damage, Orchard sighs gratefully, “We were really lucky.”

She says the store is located in “the X zone” of downtown, one of the highest-elevated areas on the island, at 15 feet above sea level. Thankfully, Orchard’s inventory of precious rare and used books remained largely untouched by water from the storm surge. “We rigged up a little dam system to make sure that if water did come in, it would get to the drain and not the books,” Orchard says proudly. “And it did exactly what it was supposed to.”

Other challenges didn't have such simple solutions. According to the building’s landlord, its storefronts had never been boarded up or shuttered before, and Orchard spent many stressful days waiting for a contractor with a long waiting list to help install an entirely new frame on which to place plywood. Because of the lengthy process of securing the store, Orchard says she and her husband were not able to evacuate: Gas stations were empty all the way up to Miami and beyond.

After the storm passed, Orchard faced a lack of running water, electricity, and internet service to power her cash register, credit card reader, and ATMs. “This one scared us all,” she says.

She didn’t let that fear stop her from keeping Island Books open as a resource to the community in the storm’s wake. “As soon as our power came on, we were back,” she says. She figured that many of her regulars had run out of books to read by then and that TV watchers without power would be craving reading material.

Without a register or ATMs, Orchard didn’t charge customers money for books at first; she was happy to trade paperbacks while the community assessed the monetary damage on the island. “I told my local customers that 'I know, let’s just write this down and we’ll take it on account; pay me when you can get to an ATM,'” she says.

After ten years, Orchard’s passion lies not in profit or bestsellers but in honoring the book lovers of her town, many of whom she knows don't have much money, who “buy the $3 used books.” In this way, the independent bookstore remains an intrinsic part of the spiritual nourishment of community in ways that Barnes & Noble will never be.

Above all else, Orchard wants her customers from near and far to walk in and discover a burgeoning community of writers and readers unlike any other in the world. “I want people to see what they can’t find anywhere else,” she says. “You can get a book anywhere, but you can’t get these books anywhere.”