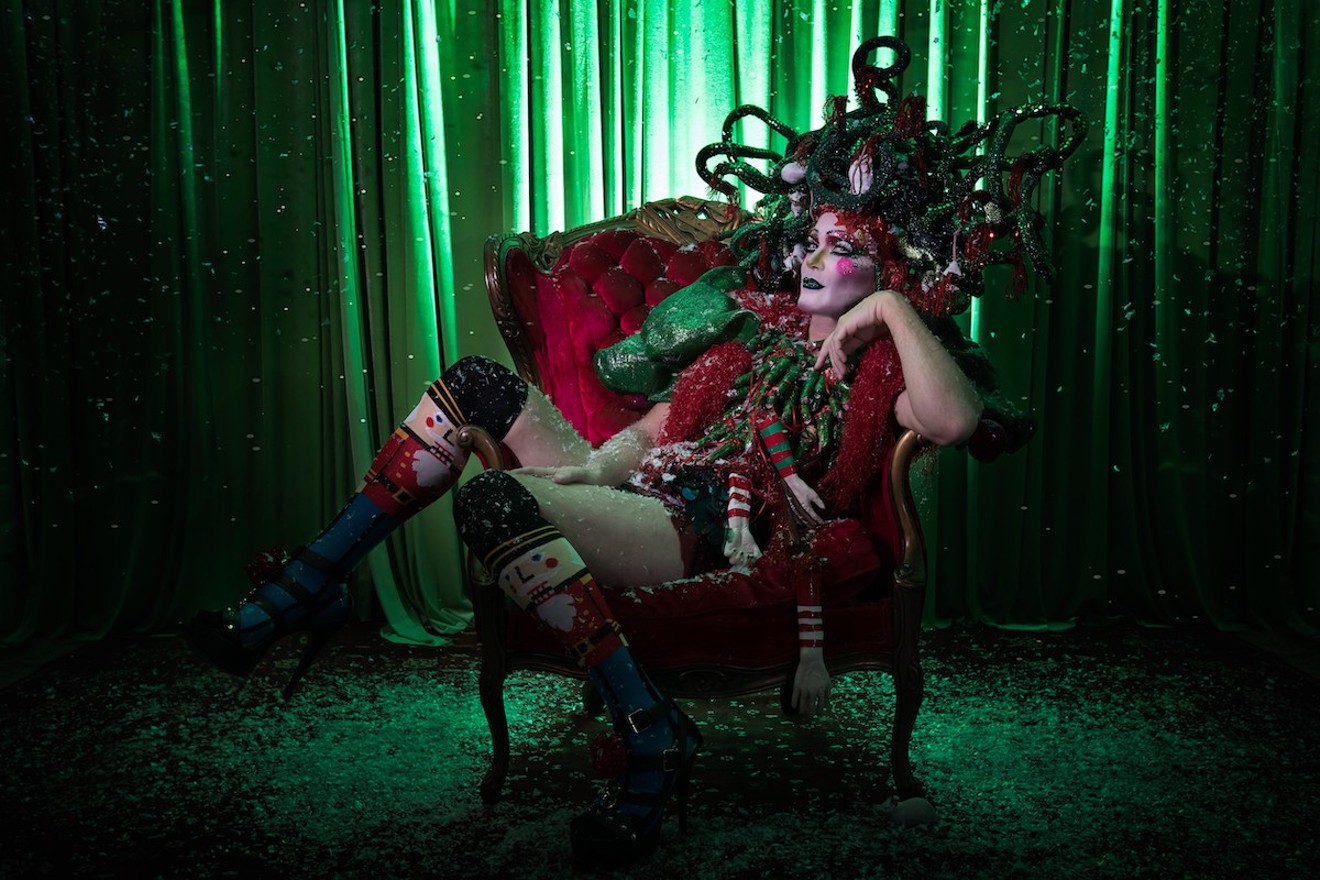 Prepare for a festive celebration the likes of which you've never experienced. Little Fang Photography
Snow is falling where artist and performer Taylor Mac stands. It’s a cold day in December, and the New Yorker is waiting out the pandemic in the Berkshires. Mac (whose preferred pronoun is judy) is preparing for the upcoming virtual show, Holiday Sauce…Pandemic!

The online performance is a new take on Mac's annual Holiday Sauce show, one that judy has been performing for the past three years.

The celebrated drag performer recalls the premiere of Holiday Sauce. It was December 2017, and it had been more than a year since Mac had performed in New York City. Judy walked out onto the stage at Town Hall. The warm stage lights hit Mac’s face. Instead of a quiet audience, judy was greeted with rumbling applause.

“It was a really special moment. It was like our city was welcoming us back,” Mac tells New Times.

Although it’s holiday-themed, the show is actually a homage to Mac’s late drag mother, Mother Flawless Sabrina, who inspired the annual show all those years ago. Mac admits judy was never a fan of the holidays, primarily because it’s a moment where many people find themselves concealing parts of their true identities to fit molds for other people.

The show, which features live performances, music, and, of course, fabulous drag performers, is not only a celebration of Mother Flawless but of all the mothers and elders out there, Mac explains.

“My drag mother, Mother Flawless Sabrina, would always say, ‘You’re the boss, applesauce,’ meaning that you’re in charge of your own life,” judy says. “I had always kind of despised the holiday season, but one year I decided that instead of dreading December every year, I’d do something that will make it fun for me.”

Since 2017, Mac and judy’s friends and collaborators get together to revamp the show and add new elements. This year, aside from the virtual aspect, the gang recorded a holiday album to complement the show.

Of the entire process, Mac says, “We had a great time concentrating on what chosen family means in this season every year. [The show has] changed my life, really.”

The pandemic edition of Holiday Sauce is, naturally, a little different from iterations past. Eighteen arts organizations in cities around the world — including Miami Dade College's Live Arts Miami — are co-presenting the performance, which premieres Saturday, December 12, and will be available for streaming through January 2, 2021.

“I’m performing a new number, and I’m hosting all of the prerecorded material that we’ve created,” Mac explains. “There’s the live element of me hosting and performing one song, but you’ll also get to see some musical numbers, a striptease, and we’re premiering a new animated video.”

Taylor Mac is a 2020 Ibsen Award recipient.
Little Fang Photography
A 2017 fellow of the MacArthur Foundation (the so-called Genius Grant), Mac was honored this year with an International Ibsen Award, a $385,000 prize given by the Norwegian ministry of culture. This year’s performance of Holiday Sauce…Pandemic! was commissioned by the International Ibsen Festival, Norway's culture ministry, and the National Theater of Oslo, a confluence of recognition the entertainer describes as humbling and gratifying.

“It just makes me embarrassed,” judy says with a laugh. “I am so thankful for the honor, and it also makes me feel like I need to get up every day and create. I have a responsibility and can’t let people down — I’ve got to live up to Henrik Ibsen now.”

Mac is no stranger to performing in Miami, but this will be the first time judy has worked with Live Arts Miami (LAM). The organization's executive director, Kathryn Garcia, says LAM has been trying to work with Mac for some time, so when the opportunity presented itself, it was kismet.

“When we were talking with [Mac's] producers about the show, we were really interested in some of the opportunities embedded within the concept to honor individuals and to really spotlight our own LGBTQ community and to lift that up," Garcia says, adding, “We all need a little Taylor Mac in our lives — we could all use a little dose of fabulousness and to really remind ourselves what’s important this time of year.”

Each of the 18 arts organizations co-presenting Holiday Sauce…Pandemic! has been asked to select a local elder who has contributed to the LGBTQ community to honor during the performance. In Miami, the producers will recognize LGBTQ+ activist Luigi Ferrer, cofounder of Pridelines Youth Services.

“Directly following the show, we’re going to launch into Sash and Sashay, which is hosted by Karla Croqueta and Adora,” Garcia explains. “We’ll have the official coronation ceremony for Luigi at the afterparty over Zoom.”

In addition to a memorable evening, Mac has inspired an LGBTQ+-specific scholarship at Miami Dade College. The show itself is free, but donations will be accepted, with the entirety of the proceeds going toward the newly established Pride Scholarship.

“We realized that there was no scholarship fund for the LGBTQ students at Miami Dade College,” says Garcia. “So we thought it was important to have something specifically to really support and lift up those LGBTQ students at the college. This is a really wonderful initiative that’s being launched because of this event, but it’s a new line of giving and support at the College that the Foundation will be continuing on beyond this event.”

Holiday Sauce…Pandemic! 7 p.m. Saturday, December 12; liveartsmiami.org. Admission is free with RSVP; the stream will be available through January 2, 2021.
KEEP MIAMI NEW TIMES FREE... Since we started Miami New Times, it has been defined as the free, independent voice of Miami, and we'd like to keep it that way. With local media under siege, it's more important than ever for us to rally support behind funding our local journalism. You can help by participating in our "I Support" program, allowing us to keep offering readers access to our incisive coverage of local news, food and culture with no paywalls.
Make a one-time donation today for as little as $1.