A Day in the Life of Three Miami Shelter Dogs 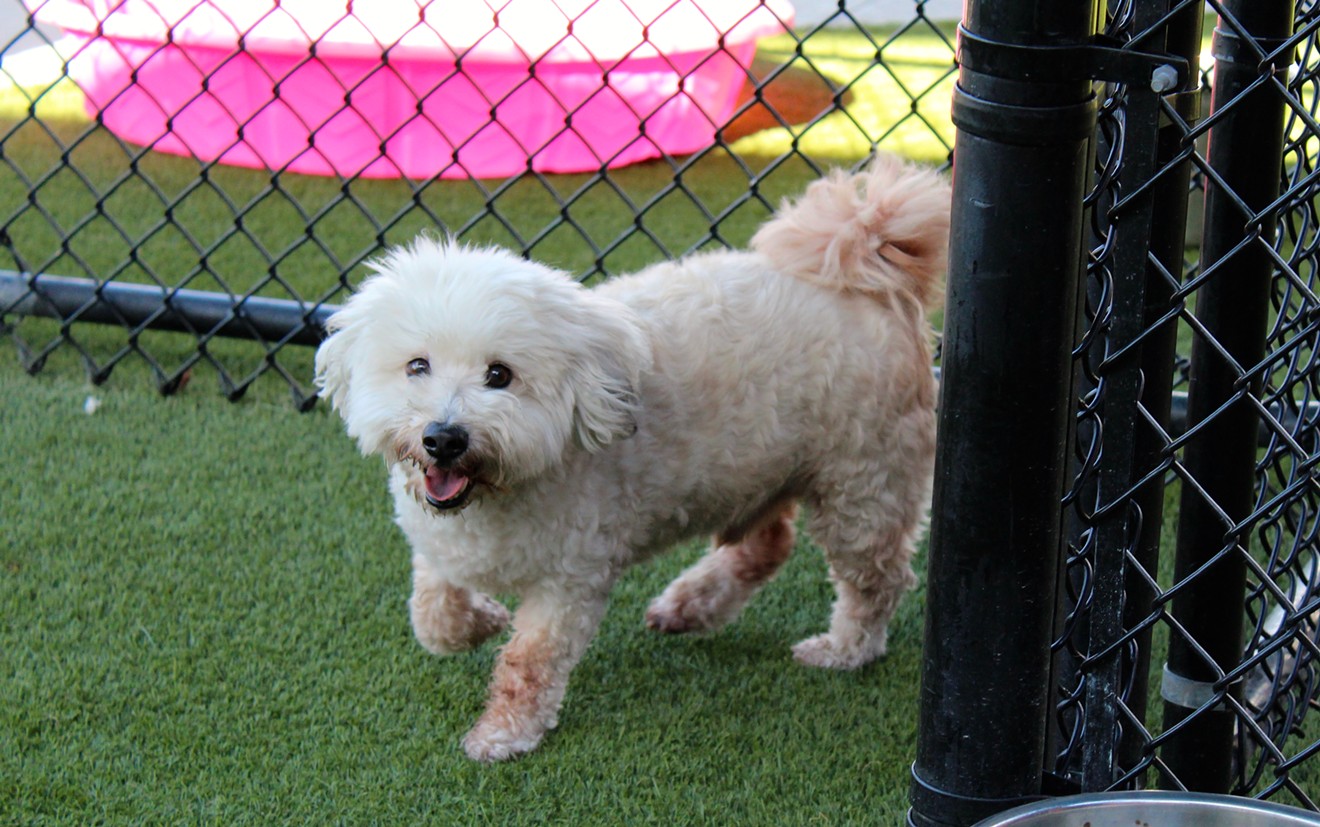 Goido is ready for an action-packed day. Jesse Scott
It’s 8:30 a.m. on a Saturday, and Goido needs to pee.

I first meet him — a big fluff of a white poodle with scattered, saliva-induced brown spots from where he has licked himself entirely too much — in a colorful dog park with kiddie pools, grassy areas, and all kinds of equipment to leap upon.

As he relieves himself — the dude really had to go — he looks off beyond the fence he’s confined within, staring at a big pup and its owner as they playfully scurry around in the grass. Goido has been full of goofy, tongue-out smiles up to this point, but now he seems a bit somber and reflective, gazing somewhat dejectedly into the distance.

Goido was surrendered to animal services by his owner just a few days earlier.

Now he resides at the Miami-Dade Animal Services Pet Adoption and Protection Center. There's no telling when he’ll be able to play with his owner — any owner — again.

When Goido arrived at the shelter, his former owner told Animal Services the dog was 4 years old. A dental exam revealed he was actually about 10. Because he has fewer years left on Earth than the shelter first thought, it’s important for him to find a loving home quickly.

Goido is one of three dogs I’ll meet today, each with a unique story. And it’s a big day for all of them: They’ll be up for adoption at the massive CanesFest event at Hard Rock Stadium. Maybe, just maybe, some folks will take them home.

CanesFest is one of 500 annual events in which Miami-Dade Animal Services participates. Each year, more than 30,000 pets pass through the facility. But before hitting Hard Rock Stadium, the pups must be prepared to bring their A-game.

Goido loves a good bath.
Jesse Scott
Erin Potosme, an adoption clerk at the shelter, escorts Goido from his morning bathroom break to a bathing spot inside the massive center, which opened in 2016 and resembles a modern mall, with a catwalk (for cats, of course), decorated rooms for "Pets of the Week," and kennels galore.

“Oh, most of our pups don’t love this whole idea of bathing, but they ultimately appreciate it after it happens,” Potosme laughs as she recalls the “countless” baths she’s given dogs at the shelter. “You can tell he was surrendered...," she says of Goido. "He has such a good temperament.”

Indeed, Goido is handling his bath like a pro. But the drying part is another story. He is placed in a cage about five feet wide with fans on each end. He’s in there for a good four minutes or so, no single second of which passes without frantic pacing and soft whimpering. 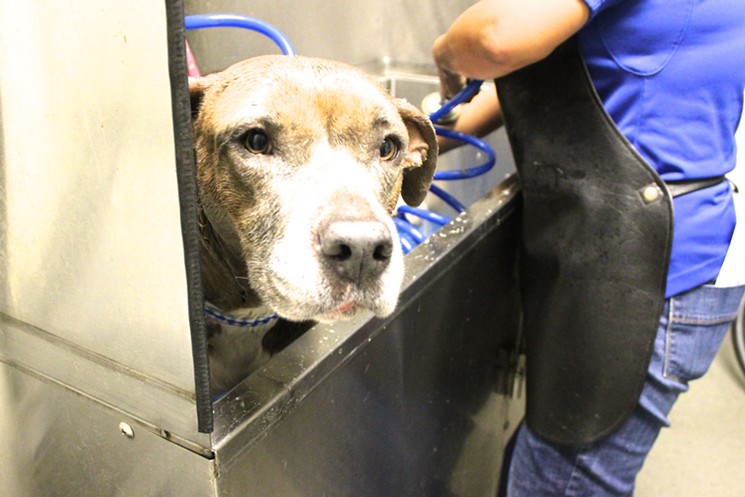 Here's Kim. She's always up for a bath and love.
Jesse Scott
After the blow-dry, it’s time for Goido to get his hair trimmed and fancied. As he’s being groomed, he crosses paths with Kim, a 70-pound terrier mix getting ready for her bath.

Kim has been to numerous adoption events and is among the shelter’s longtime residents. She’s gone without adoption for about three months, and at first it’s hard to grasp why. She has a sweet face, blinks slowly when she looks at you with a slight head-tilt down, and is all about giving a love-nibble to anyone who offers her a pet. She's a bit shy, but you can tell there is so much love under that layer of shyness just waiting to be unleashed on the right owner.

Sadly, for Kim, she has heartworms, undoubtedly the reason she has yet to find a home. But though heartworms is a scary-sounding diagnosis, the condition is treatable; the shelter even offers a free “Helping Hearts” program for new owners to easily treat Kim and dogs just like her.

Kim is less than impressed with her bath and blow-dry. She barely moves a muscle while being bathed and spends many minutes with her head rested on the bath tub’s ledge just staring at me. I imagine her begging me to take her home through soft blinks that might as well be heartfelt Morse code. In the dryer cage where Goido paced back and forth, Kim lies down as if she’s familiar with it.

This isn't Kim’s first adoption event, but perhaps it will be her last. 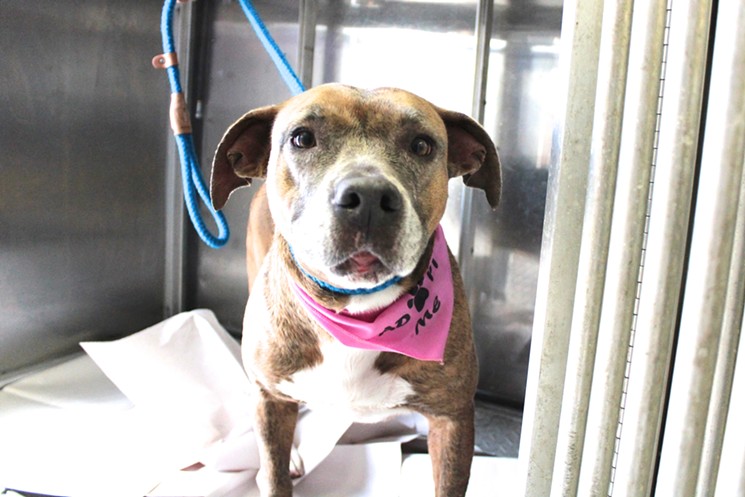 Kim is in the adoption vehicle and ready to go to a loving home.
Jesse Scott
One by one, Kim and Goido are walked outside and into the shelter’s mobile adoption vehicle. It’s a large, trailer-shaped chunk of metal. Looking at its clunky exterior, you immediately wonder how comfortable it could be for the shelter pets. But it’s pretty nice on the inside: air-conditioned, lined with changeable newspaper for pets who need to go, and stocked with food and water inside each pet compartment.

Before they depart, Goido flashes a nervous, tongue-out smile, and Kim lies down peacefully in her space. Then they’re off.

After a short drive, the pets arrive at CanesFest. In total, ten dogs and two cats are up for adoption. There, I meet my third pup of the day: Tiger, a 2-year-old, 60-pound brindle terrier mix. He was picked up as a stray by an animal welfare office worker a week earlier. 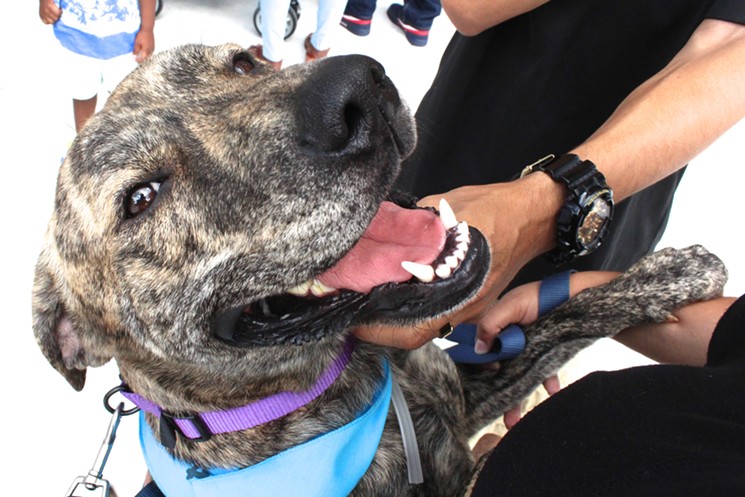 Tiger is full of hugs and has quite a set of pearly white teeth.
Jesse Scott
Tiger is a handsome boy. Streaked with tawny colors, he flashes a full-mouth smile of straight white teeth. It’s easy to see that smile when he jumps up on you in joy — he’s a big hugger. Animal Services staffers hope he'll be giving a new owner lots of hugs soon.

The clock strikes noon, and the adoption event begins. The metal shell of the adoption vehicle is rolled up, unveiling all of the animals in their windowed-off areas. From the start, a token-adorable puppy emerges as the clear favorite to be adopted first. His name is Potter, a tiny ten-pound terrier with an innocent gaze that pairs well with his periodic, high-pitched moan. And, indeed, at 12:17 p.m., Potter is the first to be adopted.

At 12:30 p.m., a couple asks to see Goido. They saw a photo of him on one of the shelter’s social media feeds, they say, and trekked more than 20 miles to get a better look at him. Shortly after the couple meets Goido, they decide to adopt him. It looks like this pup is destined for a new home.

But as the shelter crew places up an “adopted” sign in front of Goido, the couple disappears. They are nowhere to be found for the remainder of the day. It’s a false alarm for poor Goido, but he keeps on smiling as kids and families smile back at him through his window.

Goido, "adopted."
Jesse Scott
As the hours pass at Hard Rock Stadium, two questions pop up frequently. The first: “How much are the animals?” The answer: The shelter is running a special — something it often does — where pets over 35 pounds are free. Without a promotion, adopting a cat costs $35, adopting a dog costs $65, and adoptions for puppies (under four months old) cost $75 plus licensing fees.

The second most popular question is “Is that van air-conditioned?” Yes it is, and it’s a nice retreat on an unbearably hot, humid day in South Florida.

“Of course it’s air conditioned... and we do actually feed them and give them lots of water,” says Ricardo Acosta, an animal services employee, humorously reflecting on the countless times he’s been asked that question. Once he even lightly shook the trailer to prove to a skeptical woman there was water in the pets’ bowls.

The minutes continue to tick by.

Tiger, out and about, loves a good head pat.
Jesse Scott
Goido generates a lot of interest throughout the day and is brought out to meet many unfamiliar faces. But potential owners keep finding reasons to say no: “too old,” “our Sophie looks so much better,” and “he’ll die soon.”

During the four-hour event, no one requests to see Kim or Tiger, though staffers take them and all of the other dogs out for periodic walks and pets from passersby. A few larger dogs are adopted during the event, but Kim and Tiger have no such luck.

By 3:45 p.m., Kim and Tiger appear exhausted. Kim is asleep in her compartment, likely tired from another day out and about in an effort to get adopted. And though Tiger continues giving hugs to strangers, he has lost a little pep in his step. It's hard not to think it's because he’s seen his friends find homes but he has not.

Goido with Helen Avendano, Miami-Dade Animal Services' social media coordinator.
Jesse Scott
At 3:55 p.m., two women approach to say they each want to adopt Goido. The woman who asked to see Goido first verbally commits to take him home. So the woman who arrived second heads off into the distance. Then, for some reason, as soon as the second woman is out of sight, the woman who committed just moments ago backs out.

Shelter employees Darius Collier and Potosme, with Goido alongside, run to find the other potential adopter. In the swarm of people at Hard Rock Stadium, they miraculously find her. But after a short conversation, she also decides to back out of adopting Goido.

At the end of the event, five dogs have found new owners. However, for Goido, Kim, and Tiger, it’s back to the shelter. Hopefully, one day, they'll have places to call home.

UPDATE: One day after CanesFest, Tiger was adopted at an event at the Pinecrest Farmer’s Market. Goido was sent out-of-state at the end of August as part of the shelter's transport program to identify adopters outside of Florida. Kim was adopted during a Sept. 3 adoption event in Miami.