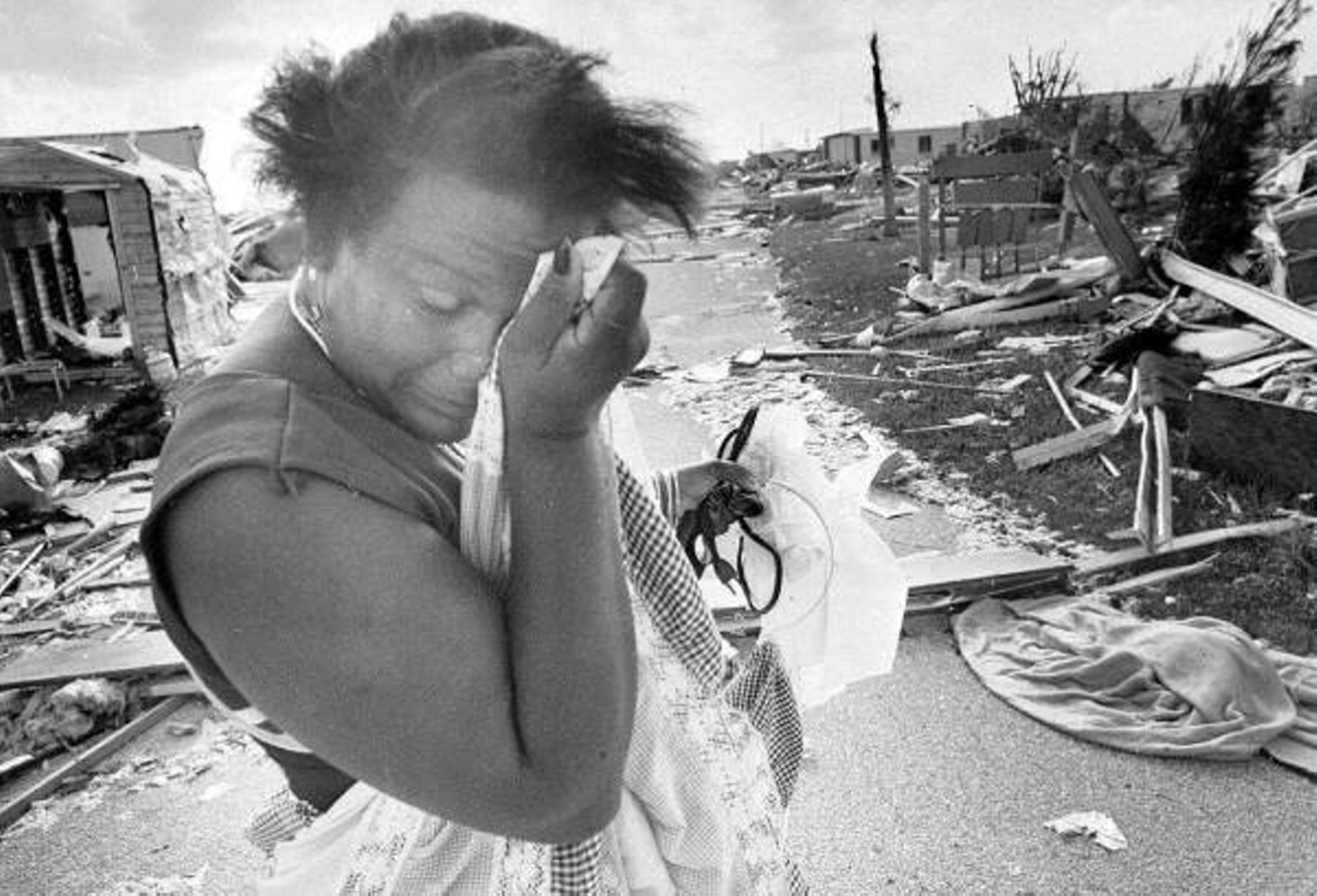 A woman stands in the aftermath of Hurricane Andrew in 1992. State Archives of Florida, Florida Memory
The word hurricane is rich with symbolism that evolves from indigenous Caribbean mythology and even deeper roots in Mayan culture. There are various accounts about the origin of the word, but most agree that Spanish explorers in the 16th Century spelled it phonetically as juracán ("wind of center"), the word Taíno natives used to describe the fierce, spiral-shaped storms that barreled into the islands.

These Native Americans believed the weather event was the vengeful handiwork of the goddess Guabancex, who would unleash her fury when tribe leaders failed to appease her. The symbol of a whirling, ferocious feminine energy also appears later in colonial history as Yemayá, the Afro-Cuban orisha, both a creator and destroyer.

Our relationship to , water, and the sun, the same natural elements that combine to form hurricanes, is complex: We need them to survive, but also for pleasure, especially here in Florida, where warm oceans and balmy breezes make for perfect beach days, a few knots help sails unfurl, and sunshine drives our economy.

As a Miami native and Hurricane Andrew veteran, I know what it feels like to be at the mercy of a powerful force that is unfathomably daunting to comprehend on a human scale. Since 1992, I’ve viewed the story of my life in two parts: B.A. and A.A. (before Andrew and after Andrew).

#Guabancex #precolumbian #Taino #god of #storms accompanied by #hurakan How did they know the shape of #Hurricane w/o satellites ? pic.twitter.com/jhUmB7iSyp

My father was an architect who quit his day job after Andrew to inspect thousands of roofs on single-family homes in Miami-Dade. He told me nothing was really hurricane-proof until it was tested in hurricane conditions. Today, the memory of conversations with him about buildings and physics reminded me it’s not only dwellings that need to be hurricane-proof, but people, too. Miami-Dade may have vastly improved its building codes since Andrew, but stronger homes don’t necessarily brace the spirit with the kind of courage, fortitude, and presence we need to face a Category 5 hurricane.

This is why developers selling the illusion of safety with hurricane-proof windows are full of shit. No building code can account for the emotional toll of a hurricane. As many in Miami have already witnessed this past week, there’s no calm before a storm. Even if nothing happens, you're already changed. Life's already been altered, or at the very least, disrupted, yanked out of its routine.

As I write this, on the morning of September 8, I think of what I’ll be writing three days from now. Many of you are in the waiting game now. The anticipation is agonizing. The surrender intolerable.

What words of comfort can I offer that sound like corny platitudes?

Life never goes back to “normal” after an Andrew or similar storm, but there’s a silver lining to these ominous clouds. Andrew had many positive takeaways and the most important one is that for a lot of folks, it was an opportunity to start over fresh. With great loss came great gains.

What good can possibly come out of such upheaval?

For one, it helps put politics into perspective, when people of all origins, orientations, and beliefs come together to rebuild a community. We become more in tune with how connected we are to nature and others. Humbled by the fierce power of nature, we are led by the path of the hurricane into a path of cooperation with our neighbors.

Secondly, it forces us to declutter our lives both materially and emotionally, to take inventory of our material belongings and spiritual baggage and let go of whatever no longer serves us. Now’s a good time to surrender all our shit.

Third, time to put life on hold gives us an opportunity to shatter the conventional illusion that everything is stable. When walls literally fall around us, we grow to appreciate them so much more, not because they lock us in, but because we'll never again take for granted the life that we've built for ourselves, even with all its perceived shortcomings.

And last but not least, we’ll see clearly where our priorities lie. It’ll be time to pick up the pieces of our lives that really, truly, deeply matter. If we look closely enough, there's a cleansing path amid the rubble. Maybe being taken off course puts us on an even better path when the storm subsides.

Hurricanes are a way of life in Miami, even though we haven’t had a big one like Andrew since ‘92. A hurricane is a hubris-busting, humility-creating machine, leaving physical destruction as well as personal and collective reality checks in its wake. The emotional toll lingers long after its harrowing passage, and the aftermath serves as a new foundation for community healing, at least until the next big one. People will crumble on the inside, and this is why the community should stick together.

Miami, we're in this together — even evacuees and expats — and we don’t have to believe in native mythologies to understand why the Taíno lived out their days knowing they’d be subject to the goddess’ fury. They did before weather radars, GPS, and satellite imagery, never second-guessing Mother Nature. Let’s also not second-guess our own nature — that we can get through this and be a better, more resilient community than we were before Irma.