At Hattie's House, a Daughter Follows in Her Mother's Community-Minded Footsteps 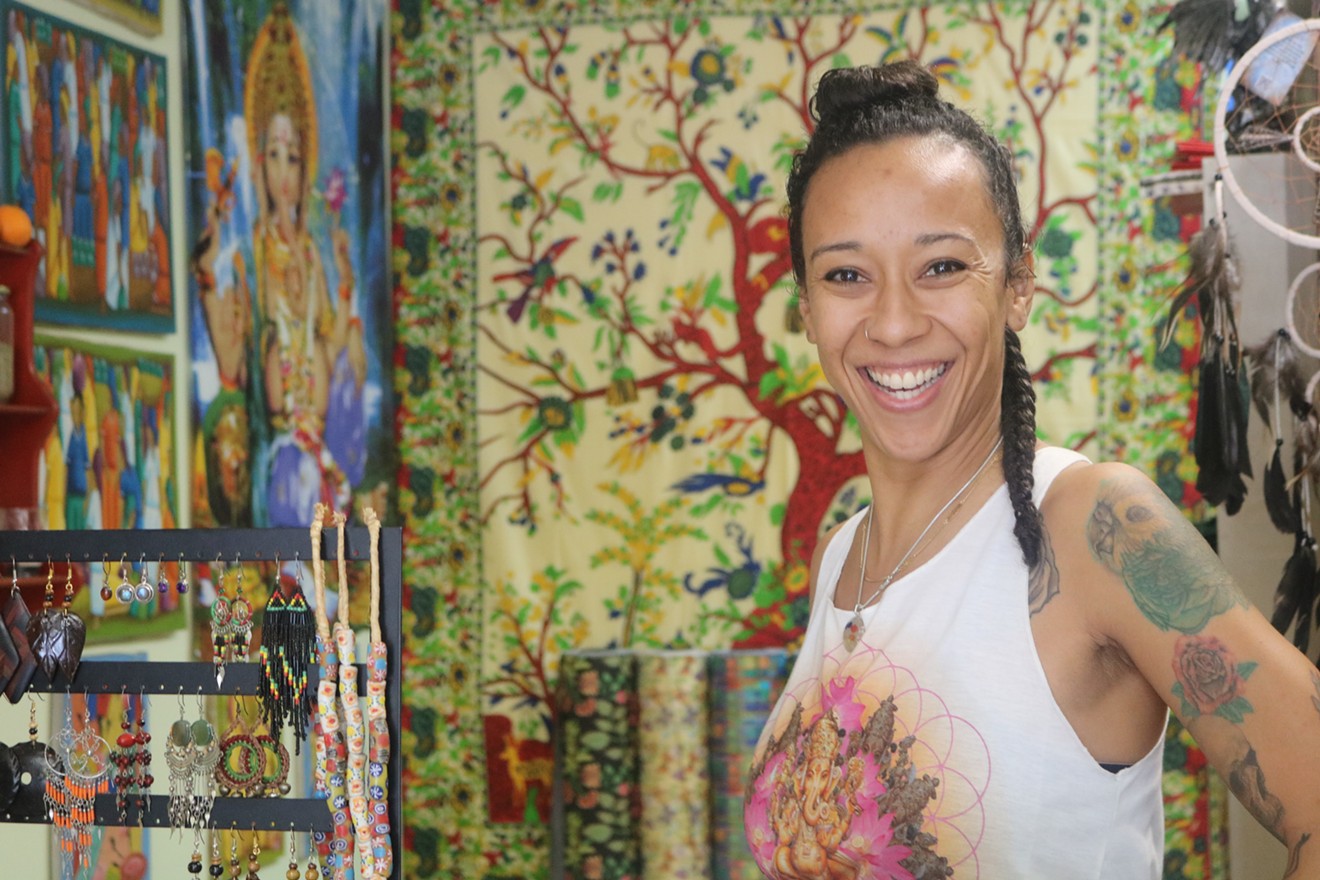 Hattie Mae Williams poses inside her store, Hattie's House. Photo by Alexandra Martinez
On a late night in 1976, Flossie Williams was tired and working the late shift at the Denny’s on Biscayne Boulevard and NE 36th Street. The waitress supported her family, as she had done from a young age. But on this fateful evening, she mixed up an order and the customers quickly called out her mistake. Williams’ patience had run dry. “Eat it anyway,” she said and walked out the door.

The next day, she started her own business.

“I wanted to be on my own territory all the time,” says Williams, who was born and raised in the Northeast, but made her way to Miami in 1968.

For a while, Flossie’s Funky Fragrances, a head shop, was located at the Flea Market on NW Seventh Avenue and 141st Street, where she sold incense and fragrance to many people including members of the Marley family. By 1984, her youngest daughter, Hattie Mae Williams, then just 3 years old, accompanied her to the store.

“I grew up in that atmosphere. I remember always having red dye on my hands from counting incense and moving things around in the store,” says Hattie.

By 1997, Flossie’s had moved to downtown Miami, where it spent almost 20 years fostering community around metaphysical products.  Her store was beloved for fair prices, a chromatic candle sculpture made from year’s worth of melted wax, and Flossie’s pragmatic wisdom delivered from behind the counter. 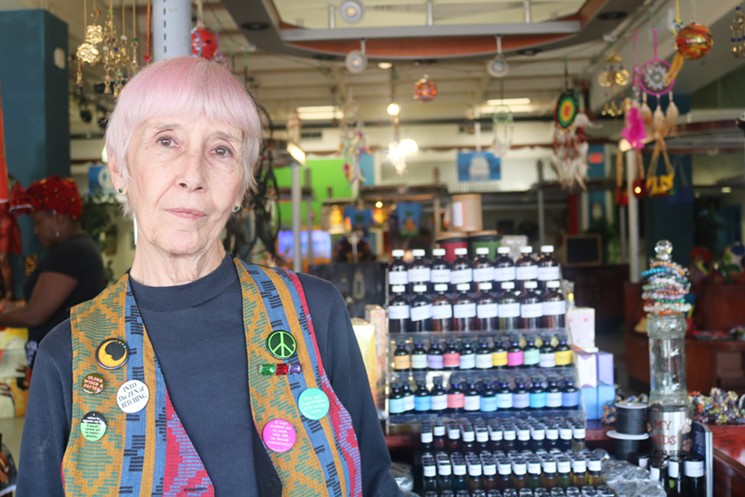 Flossie Williams
Photo by Alexandra Martinez
But then in late 2016 an electrical fire burned it all down. Flossie remembers it well. She was pulling into a downtown parking spot with her grandson one December morning. At first, it seemed like any other day. But then she noticed the Plexiglas door was boarded up and the vibrant interior was covered in a dull grey ash.

Firefighters said a power surge sparked the fire. Water damage and the sprinklers destroyed virtually everything.  Among the few items left were a selection of crystals and a large brass Buddha positioned at the entrance, where customers would leave offerings. Otherwise, the store resembled a war zone.

“I was instantly calm. I accepted it and dealt with it,” recalls Williams. “You take every negative and turn it into a positive, so that’s what I’m doing.”

While her customers were distraught — some even opened a GoFundMe to support her — Williams called the fire a blessing in disguise. Nearing 73 years old at the time, she was looking for an exit strategy to spend more time with family.

“I figured I would have worked there and dropped dead on the job, but the universe said, 'OK kiddo, here’s your exit strategy' and I’m accepting it,” she says.

The months following the fire were chaotic; she rented a storage unit, rummaged through her remaining products and patiently sold to clients who sought her out. But this past summer, the management changed and Flossie was pushed to pivot once again. Now she sells at the Little Haiti Cultural Center’s Caribbean Marketplace (5925 NE Second Ave., Miami)

Her kiosk, instantly recognizable by its color and the soothing scent of sri sai flora incense, sits squarely in the middle of Little Haiti’s lively market. She sells to newcomers and regulars alike, and her prices have remarkably remained the same.

“I wouldn’t want to run a shop I wouldn’t go into myself,” says Williams. 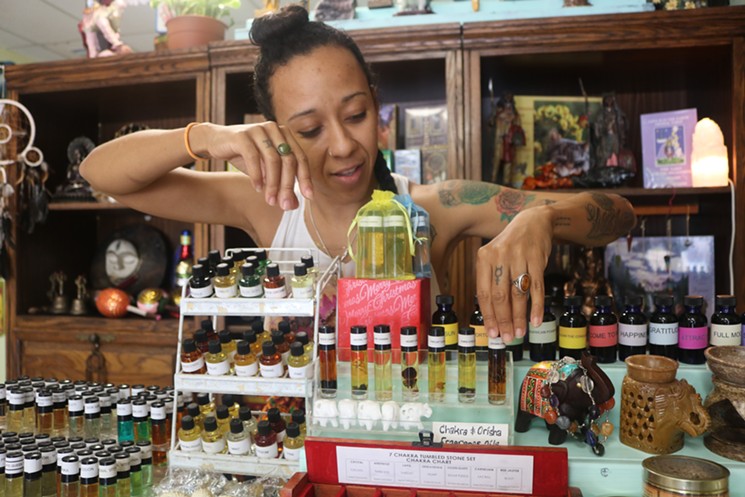 The proprietor shows off her wares.
Photo by Alexandra Martinez
In the two years since the fire, Flossie’s daughter Hattie has noticed a void in the community. An accomplished dancer and choreographer, she left Miami for New York City, but moved back about four years ago. She was away for 15 years pursuing her career, but in 2013 a Knight Foundation Arts Challenge Grant, and the ocean, brought her back.

“My artistic and personal work was shifting towards community practice and socially political topics, so it made the most sense for me to go back to my roots and refocus in a place where my efforts will affect the people I love,” says Hattie. “I’m a strong believer that one must get their house in order before they start trying to fix other people's houses.”

Since her move back, she has worked on sight-specific performance pieces in non-traditional spaces, such as the Orishas Project, and partnered with local organizations to bring life to the community through her dance company, The Tattooed Ballerinas.

When her mom’s store closed, Hattie realized Flossie's was more than just a store; it was a gathering space for community. In December, she channeled her mother’s resilience and opened her own shop: Hattie’s House in North Miami.

“I grew up in this business and this practice, of fusing different cultures and religions. It wasn’t such an out-of-the-ordinary step for me [to open the shop],” says Hattie. “I just kept coming back to the word community. Miami is such an isolating place, very segregated, and I feel like these products bring people together.”

Hattie’s store is as warm, inviting and unpretentious as Flossie’s once was. It boasts pleasant smells and a familiar face as soon as you walk in. Hattie’s has only been open for two months, but her customers are already loyalists.

Hattie Mae Williams says her store is "witchier" than her mother's.
Photo by Alexandra Martinez
Like Flossie’s, Hattie’s store has reasonable prices and a diverse selection of local and international products from a broad range of cultures. It accepts and supports people’s diverse practices.

“Growing up in the atmosphere that my mom created, and also being in the store, she always talked about how ‘we are all one and connected’ she called us ‘children of the universe.’ That influenced me to look at all things and create a fusion of practices and rituals,” says Hattie.

Her store is taking a decidedly “witchier” and Afrocentric approach.

“I have to be aware of the area I’m in,” says Hattie. “I don’t want to exclude any groups. I think a lot of things are being gentrified aggressively, I think things are being recapitalized, repackaged, resold, and I think it's important to preserve culture and integrity of practice. I think it’s a renaissance in terms of ... spirituality, but there has been a practice, culture and community that has been doing this for forever, so I want to honor that as well.”

Hattie also hosts weekly singing bowl meditations that are free to the public. She has plans to host tarot card workshops, a woman’s circle, and other community events. “I’m putting my ear to the ground and hearing what people want to learn about and also inviting people from the community to come in and do workshops.”

Hattie now has a one year-old daughter who accompanies her at the store. Sometimes the baby rearranges items on the shelf, watching her mom hard at work, just as Hattie did when she was young.

“I learned so much from my mom as a woman in business. I have my own kid now. [My mom] paid a mortgage, put me through college with this business and raised three kids with this business,” says Hattie. “She really gave me a gift.”

Hattie’s House. 933 NE 125th St., North Miami; 786-606-6358; hattieshouse305.com. Tuesday through Saturday 11 a.m. to 6 p.m. .
KEEP MIAMI NEW TIMES FREE... Since we started Miami New Times, it has been defined as the free, independent voice of Miami, and we'd like to keep it that way. With local media under siege, it's more important than ever for us to rally support behind funding our local journalism. You can help by participating in our "I Support" program, allowing us to keep offering readers access to our incisive coverage of local news, food and culture with no paywalls.
Make a one-time donation today for as little as $1.