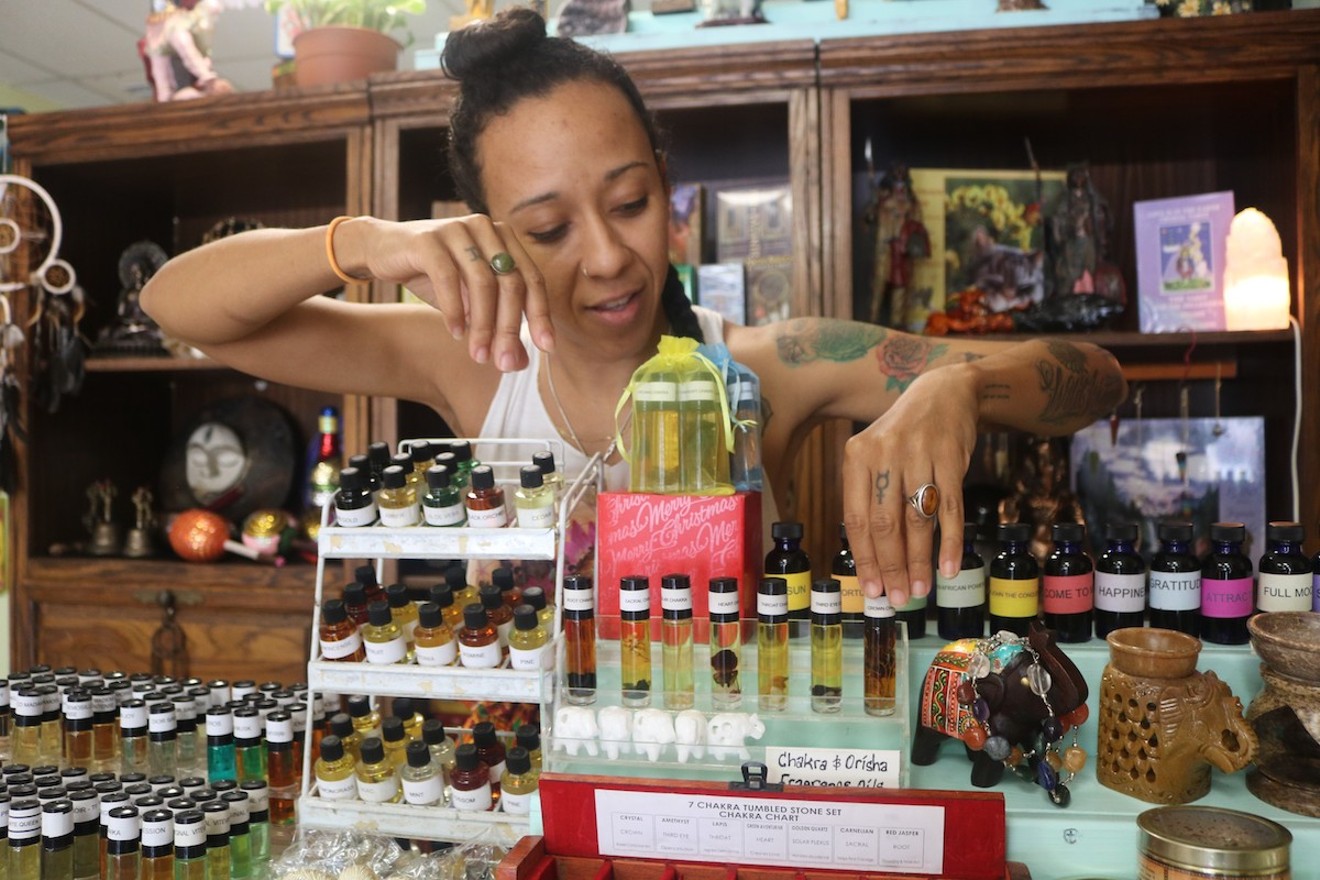 Hattie Mae Williams Photo by Alexandra Martinez
For Hattie Mae Williams, growing up in her mother's metaphysical shop, Flossie's Funky Fragrances, was like being in a well-illustrated fantasy book. At just three years old, she was surrounded by a sensorial world of crystals and oils — it is no wonder her innately creative Gemini imagination would run wild. She still remembers the red dye on her hands from counting incense and moving things around in the store.

As Williams grew older, the store that was frequented by members of the Marley family and other loyal customers became a safe space for her to do homework after school and learn the intricacies of running a business. Eventually, she became a professional dancer and choreographer and channeled into her own endeavors the hard work she saw her mother pour into her decades-old store.

When an accidental fire left Flossie Williams without a storefront in 2016, Williams says, she felt the need to fill the void. In 2018, a year after giving birth to her first daughter, she opened Hattie’s House in North Miami, where she has carried on her mother's legacy and cultivated a similar environment of pragmatic wisdom, unpretentious warmth, and a space where her two children could grow up.

When the pandemic forced a statewide shutdown, Williams decided to shift gears. After two years spent serving the metaphysical community from a brick-and-mortar location, she's closing the doors to Hattie’s House on Saturday, November 21, and fully transitioning to selling online.

"My first reaction [to COVID-19] was concern for our family's well-being and if we could maintain our lifestyles financially," Williams tells New Times. "I immediately started planning and went to Instagram to take orders for locals who would do a pick up at the shop without coming inside."

Williams always had a website but was unable to give it proper attention until the shutdown pushed her in that direction. After online sales started gaining momentum, she realized that most of her products were essential items that people needed during the chaos of quarantine, either as cleaning products or self-care. The ultimate decision to close was multifaceted, partly because Williams wanted to be more present in her children's daily lives and not be beholden to a physical location. But ultimately she didn't see it as a wise financial investment.

"For the difficulties that the space had and the sometimes unsupportive landlord dramas that most large rental companies come with, it didn't make sense investment-wise to stay," Williams explains.

While the store's closure is sure to upset the loyal clientele, for Williams, it's a natural progression. In two short years, Hattie's House became a spiritual refuge for people seeking to improve their lives and communities, but Williams' vision for the store's future goes beyond its four walls.

"There's only so much I can really do with having a storefront," she admits. "There’s other things I'd really like to do, one is be really present in my kid’s lives, I imagined having the shop be that place where they could come and see what I am doing, and they could learn and do their school work, but with COVID, it wasn’t really realistic. Energetically, I feel like now is the time for Hattie’s House to step into growth and offer more to the people. 2020 has really dropped a lot of things for myself and other people, this is me growing and not being beholden to landlords, or a certain type of narrative of how a business is supposed to flourish."

After November 21, Hattie's House will transition to a website, hattieshouse305.com, which Williams says will be more accessible, featuring videos and offering services such as reiki sessions, personal coaching, and classes on crystals, healing, and shadow work. She will also continue having weekly sales on Instagram and Facebook where customers can order from her hand-picked crystals. Once the dust has settled, she hopes to hold monthly meditation meetups and pop-ups throughout the area. 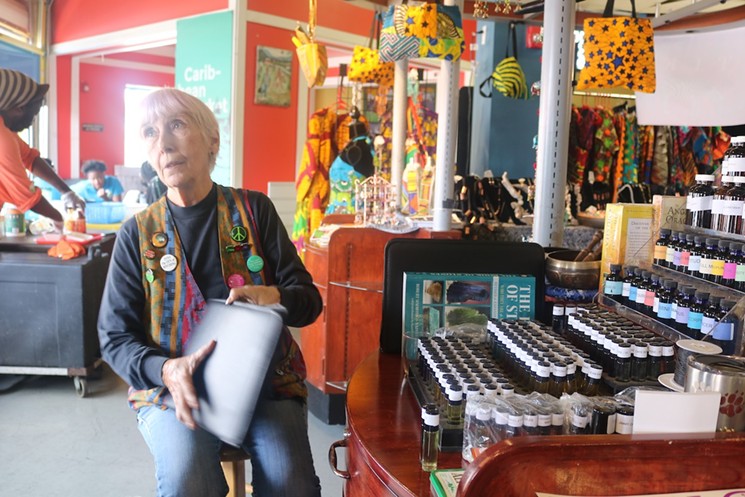 Flossie Williams
Photo by Alexandra Martinez
Hattie's House followed in Flossie's footsteps as a metaphysical store free of pretension, breaking with the trend of holistic shops that up-charge solely for aesthetics. At Hattie’s House, wellness was not just for the individual, but always rooted in a desire for the greater communal good. With Hattie’s familiar face behind the counter, walking through the doors was truly like stepping into a home that could help you find your way.

"The overall feeling and vibe is one of loss and sadness, which I totally understand, I'm right there with them," Williams adds. "I feel like Hattie’s House has created a space and filled a void for particularly people of color within this whole holistic spiritual community, I feel like this was the space for people who wanted to go into a store that wasn’t overpriced or pretentious, you could just vibe out and ask questions, I know a lot of people are sad about that part. There's a lot of younger people who have come into Hattie's House who are really strong advocates in the Miami community and I've seen a lovely fierceness in them since I opened up two years ago. And I don’t know if that has to do with Hattie's House, I like to think it does."

Ultimately, Williams hopes she can be an inspiration to others to embrace change.

"Things shift and we can shift with it," she says.

For Williams, she sees the closing as a proper send-off for her mom and the customers who never got to say goodbye to Flossie's downtown location four years ago.

"There’s no dramatic catastrophe that has happened. Everyone has been forewarned that we’re closing," Williams explains. "My mom has been able to take a couple of deep breaths about it. We’re not doing it in a panic."

In the last days of Hattie's House, countless customers have come to take advantage of sales, reminisce about the old days in downtown, and say their goodbyes to the store — for now. While the store is closing, Flossie, who will continue her wholesale oil business, is certain the customers will remain loyal and the business will continue.

"At first I was upset — [Hattie] built a beautiful business and people were heartbroken like they were when my store closed," Flossie says. "We'll still keep many of those customers and many will transition to online because they love Hattie."

For the customers who stayed in touch with Flossie, her shop was a starting point for lifelong friendships, just as Hattie's House has been for a new generation. For others who lost contact after the fire, finding Flossie at Hattie's House was like a homecoming.

"We were unique, and I was so proud that she kept the goodness that I had in my shop. I didn’t really teach her, she just grew up in the store, and I'm sure she’ll keep the same energy with the online store, she's good at that," Flossie says. "Whatever she undertakes she does well and she's successful. Our children raise us, right?"

Hattie’s House. 933 NE 125th St., North Miami; 786-606-6358; hattieshouse305.com. Monday through Saturday 1 to 6 p.m.
KEEP MIAMI NEW TIMES FREE... Since we started Miami New Times, it has been defined as the free, independent voice of Miami, and we'd like to keep it that way. With local media under siege, it's more important than ever for us to rally support behind funding our local journalism. You can help by participating in our "I Support" program, allowing us to keep offering readers access to our incisive coverage of local news, food and culture with no paywalls.
Make a one-time donation today for as little as $1.