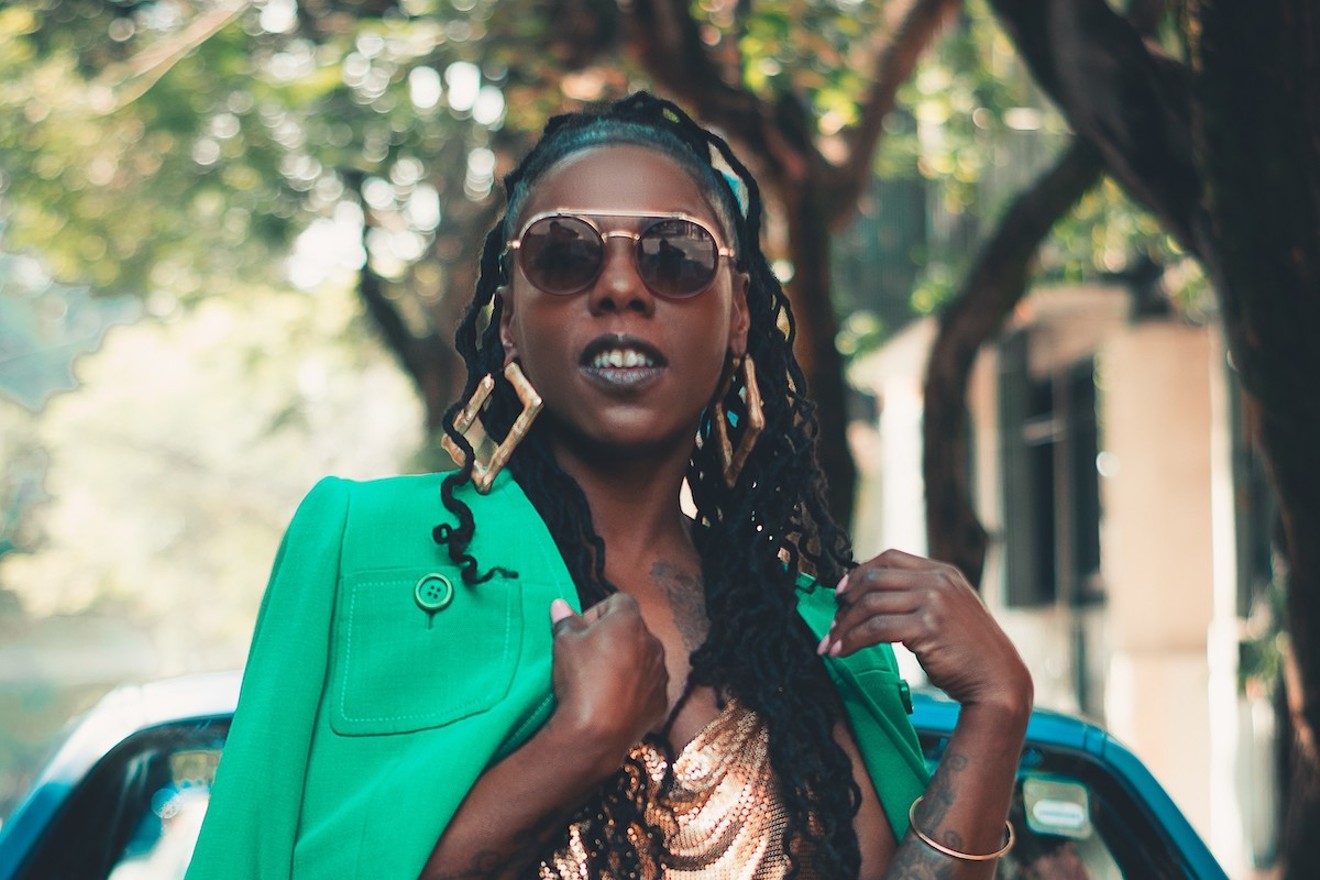 Yoga can be the perfect way to reset and start your week. This Monday, experience multisensory yoga that invites participants to truly connect to the moment for a truly relaxing experience at Yoga by the River. Instructors Megan (yoga teacher and holistic health coach) and Rob Newmans (sound healer, AcroYoga and slack-line instructor and fire performer) will lead you through pranayama and aromatherapy breath activation, while you listen to soothing sounds and, ideally, transcend into another realm. 6 p.m. Monday, at the Movement Oasis, 185 NE 84th St., Miami; themove-ment.com. Tickets cost $44 via eventbrite.com. Ashley-Anna Aboreden

Most Americans probably don't know where their food comes from — and that's a shame. Being connected with the farm-to-table process is vital in understanding why access to locally grown produce is necessary for a healthy society. On Tuesday, Habitat at 1 Hotel South Beach hosts a talk with Jim Gale, founder of Food Forest Abundance. The company encourages everyone to install a food forest in their own backyard or balcony, making it suitable for urban and suburban environments. Learn more about the movement directly from Gale, who will touch on topics including regenerative agriculture and ecology. 7 to 8:30 p.m. Tuesday, at Habitat at 1 Hotel South Beach, 2341 Collins Ave., Miami; 305-302-6817; 1hotels.com. Admission is free. Jose D. Duran

Diaspora Vibe Cultural Arts Incubator (DVCAI) invites you to experience a powerful exhibition surrounding the richness of diaspora. Curated by Rose Gordon-Wallace, "Depth of Identity: Art as Memory and Archive" investigates the impact and legacy of the African, Indo, and Caribbean diaspora across the U.S. and the Caribbean. The exhibition includes works by 19 artists and features visual art, music, film, teas, and art performances by Yacine Tilala Fall and Kim Yantis. Noon to 7 p.m., through October 20, at Green Space Miami, 7200 Biscayne Blvd., Units 1 and 2, Miami; dvcai.org. Admission is free; reserve a spot via eventbrite.com. Ashley-Anna Aboreden

On Thursday, YoungArts debuts its fall exhibition, "Sunshine," highlighting the work of Haitian-American artist Mark Fleuridor. Inspired by ancestral lineage as well as the subtropics, Fleurido incorporates aspects of family, friends, home spaces, and even tropical plants, inviting the viewer to dwell on the cycle of life. On opening night, the foundation will host "The Growth of an Artistic Practice," a discussion between Fleuridor and multidisciplinary artist Loni Johnson, moderated by YoungArts associate curator Luisa Múnera. "Sunshine" will be on view through December 10. 5 to 8:30 p.m. Thursday, at YoungArts Gallery, 2100 Biscayne Blvd., Miami; 305-377-1140; youngarts.org. Admission is free with RSVP via eventbrite.com. Ashley-Anna Aboreden

Trevor Wallace at the Parker: See Friday
Photo courtesy of the artist

One of the city's iconic landmarks, the Opa-locka Hialeah Flea Market, is closing its doors after 37 years. But much like everything in Hialeah, nothing comes to an end without a big bang to go along with it. The pulgero has partnered with Probidæ, Internet Friends, Annex, and the Boombox for a 12-hour closing party featuring a stellar lineup of Miami-based artists, community organizers, and market vendors. Partygoers can say goodbye to the best place to score everything from jewelry to airbrushed apparel, accompanied by two stages of DJs and live music. 6 p.m. Friday, at Opa-locka Hialeah Flea Market, 12705 NW 42nd Ave, Opa-locka; 305-688-0500; opalockahialeahfleamarket.com. Tickets cost $10 via shotgun.live. Sophia Medina

"You expect to fall asleep sober" when Trevor Wallace comes around? Think again. The standup comedian takes the stage at the Parker as part of his Are You That Guy? Tour. Wallace first blew up social-media platforms such as Vine and Instagram with his humorous videos. Eventually, he became a player in the comedy scene, especially among young adults. Today, fans praise him for coming up with highly quotable lines like "Ain't no laws when you're drinking Claws" and "Dude, I haven't been this sober since birth." 7 p.m. Friday, at the Parker, 707 NE Eighth St., Fort Lauderdale; 954-462-0222; parkerplayhouse.com. Tickets cost $29.50 to $39.50 via ticketmaster.com. Sophia Medina

In 2001, Suzan-Lori Parks' Topdog/Underdog premiered off-Broadway at the Public Theater before moving to Broadway the following year. The play, for which Parks won the Pulitzer Prize for Drama (the first Black woman to be so honored) and the Outer Critics Circle Award, zeroes in on two brothers haunted by their past and obsessed with the street con game three-card monte. On Friday, the Main Street Players present their production of the award-winning play under the direction of Carey Brianna-Hart. Shows are scheduled every weekend through October 16. 8 p.m. Friday and Saturday and 2 p.m. Sunday, at Main Street Playhouse, 6812 Main St., Miami Lakes; 305-558-3737; mainstreetplayers.com. Tickets cost $30. Ashley-Anna Aboreden

Perhaps you know T.J. Miller from his memorable stint on HBO's Silicon Valley as the coattail-riding Erlich Bachman. Miller has also had roles in Ready Player One, Big Hero 6, Deadpool, and Transformers: Age of Extinction. He's also had specials on Comedy Central and HBO. Miller stops at Miami Improv on Friday and Saturday for a two-night stint, delivering the kind of standup comedy he's long been known for. 8 and 10:30 p.m. Friday and 7 and 9:30 p.m. Saturday, at Miami Improv, 3450 NW 83rd Ave., Ste. 224, Doral; 305-441-8200; miamiimprov.com. Tickets cost $30. Jose D. Duran

Just in time for the start of the spooky season, Savor Cinema and Popcorn Frights hosts a weekend full of gore and horror during the Popcorn Frights Wicked Weekend. On Saturday, Savor will screen Halloween film classics Near Dark, Halloween 4: The Return of Michael Myers, and Halloween 5: The Revenge of Michael Meyers. Return on Sunday — if you dare — for the Florida premiere of Spirit Halloween: The Movie and a 4K restoration of teen slasher flick I Know What You Did Last Summer. Saturday and Sunday, at Savor Cinema, 503 SE Sixth St., Fort Lauderdale; 954-525-3456; popcornfrights.com. Tickets cost $10 to $79 via eventbrite.com. Sophia Medina

No two film festivals are alike, but you've probably not been to one as uniquely weird as the Miami Underground Film Festival (MUFF). During the fifth-annual MUFF, audiences will experience weird shorts, music videos, the Circle-Jerk Awards, and even the return of several filmmakers who've screened their work at past editions. Need more inducement? There's food and a full bar to enjoy during the screenings. 4 to 10 p.m. Saturday, at Hard Rock Cafe, 401 Biscayne Blvd., Miami; instagram.com/miamiundergroundfilmfestival.Tickets cost $15 to $20 via eventbrite.com. Ashley-Anna Aboreden

British musician and producer Bonobo braves the Miami humidity when he takes the stage at Space Park on Saturday as part of his Fragments Live Tour. The L.A.-based artist's North American tour kicked off last month in Montreal. Bonobo released his seventh album, Fragments, back in January and has admitted it was a challenge to create. The five-time Grammy nominee told Billboard's Katie Bain that he suffered from writer's block during the lockdown. "There was the irony of having all this time and nothing to talk about. So it took a while," he confided. 7 p.m. Saturday, at Space Park, 298 NE 61st St., Miami; spaceparkmiami.com. Tickets cost $25 to $40 via eventbrite.com. Jose D. Duran

Dress up in your all-black attire and put on your darkest makeup: It's time for a Gothic Tea Party. Join your fellow goths for a brunch of the highest order, including exquisite teas, three-tier tower finger sandwiches, and sweets that nobody can refuse. Don those (black) gloves and point those pinkies outward — this event, hosted by the local pinup community Pinned South Florida, is a tea party to die for. 11 a.m. Sunday, at the Tea Room at Cauley Square, 12310 SW 224th St., Miami; pinnedsouthflorida.com. Tickets cost $45; email [email protected] to reserve your spot. Sophia Medina

Is your kid driving you crazy playing "Baby Shark" on repeat? Find some respite when the New World Symphony presents "Powers and Potions: The Magic Within" on Sunday. The symphony invites families to stop by the New World Center for a day of classical music featuring works from Tchaikovsky's Sleeping Beauty and Disney blockbusters like Encanto. Don't worry if your little one can't hold still during the performance. The event is presented with kids from 4 to 9 in mind, so you're welcome to talk and move throughout the concert hall while the orchestra plays. 11:30 a.m. Sunday, at the New World Center, 500 17th St., Miami Beach; 305-673-3330; nws.edu. Tickets cost $20. Sophia Medina
KEEP MIAMI NEW TIMES FREE... Since we started Miami New Times, it has been defined as the free, independent voice of Miami, and we'd like to keep it that way. With local media under siege, it's more important than ever for us to rally support behind funding our local journalism. You can help by participating in our "I Support" program, allowing us to keep offering readers access to our incisive coverage of local news, food and culture with no paywalls.
Make a one-time donation today for as little as $1.