Best of Miami 2019: The Best Art and Artists 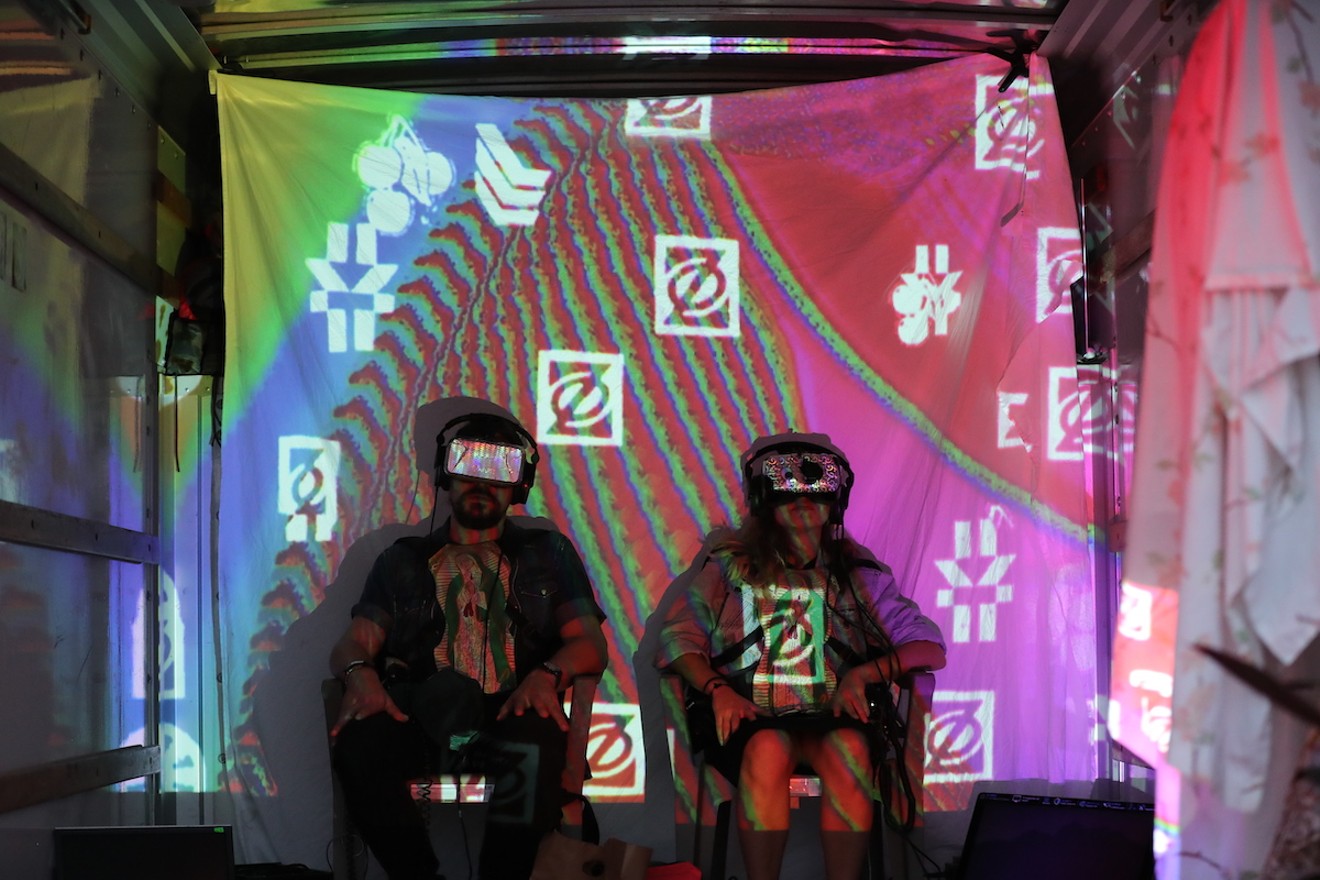 Satellite Art Show, Best of Miami's 2019 winner for best art fair. Satellite Art Show
New Times' annual Best of Miami issue will be released online tomorrow morning, with hundreds of our staff's picks of the finest people, places, and culture that ruled South Florida over the last year. Can't wait? Here's a sneak peek at a few of the winners who have helped define Miami art.

"Carolina Fusilier: A Kitchen with a View" at Locust Projects.
Locust Projects
Best Art Gallery: Locust Projects. The cycle of gentrification is hard to break: A not-so-hip neighborhood with cheap rent attracts artists. Their galleries increase both the hipness of the neighborhood and demand for its real estate. Before long, the rent is not so cheap anymore, and artists move on to another undiscovered neighborhood. But Locust Projects has not merely survived the development of its surroundings — it’s also thriving. One of a dwindling number of Design District galleries, Locust boasts a uniquely experimental process that brings in exciting talent to create one-of-a kind shows in its ever-evolving space. In the past year, the gallery has commissioned and presented work by artists such as Philadelphia’s Jennifer Levonian and Eva Wylie and Chicago’s Bethany Collins. The gallery has highlighted local talent as well, like the Miami-born Cristine Brache. And though its surroundings have grown fancy and staid, Locust has maintained its alternative, independent spirit. To celebrate its 20th birthday last September, the space staged the exhibit “20/20: Twenty Artists/Twenty Hours,” which was exactly what it sounds like: a marathon art show in which 20 artists or collectives presented newly commissioned works, one per hour. As the geographic center of Miami’s arts scene continues to shift, Locust’s lasting reign over the corner of NW 39th Street and North Miami Avenue is a welcome constant. The gallery’s hours are 11 a.m. to 5 p.m. Tuesday through Saturday. 3852 N. Miami Ave., Miami; 305-576-8570; locustprojects.org.

Best Art Fair: Satellite Art Show. As Art Basel has evolved into a gazillion-dollar money-making affair, much of Miami Art Week has become traditional, less risky, and, well, predictable. But Satellite Art Show consistently brings the weird and the whimsy. Case in point: At last year’s edition, the first thing to catch your eye as you entered might have been Snoop Dogg Hot Dogs, a collection of giant inflatable hot dogs in buns with the rapper’s face at one end. And there’s more to this fair than mere spectacle. Local artists such as Milagros Collective and Sleeper also contributed creative cred to the show, along with 38 exhibitors from across the nation. It’s a throwback to the days when doing Basel meant witnessing striking pop-up performance art and an exhibit staged in an abandoned storefront that was probably illegal. As Hyperallergic put it: “Miami Beach’s Satellite art fair is not a release from an inundation of art, but perhaps it’s a reminder of why you like art in the first place.” 917-683-8300; satellite-art-show.business.site.

Best Public Art: Disem's Dwyane Wade Mural. When Dwyane Wade finally hung up his Miami Heat jersey and retired from the game earlier this year, it marked the end of an era. But there’s one place fans can still go to pay homage to the greatest athlete South Florida has seen in decades (and maybe ever, depending upon whom you ask): Little Havana. There, on a wall of a combination gym and spa, Wade’s visage stands out in front of the characteristic backdrop of Miami street artist Disem, who painted the wall to honor the legend before his retirement. The All-Star guard gazes serenely out of the mural, a calm intensity in his eyes. Viewers can recognize the neon pinks and blues of the Heat’s new Vice jersey resting on his shoulders. Sure, there have been plenty of homages to Wade in Miami throughout his career. Hell, this isn’t even the first or second or third mural with his face on it. But now that Wade has left Miami with a ton of goodwill, a helping of nostalgia, and a number-three-size hole in its heart, this one might be the last. 810 SW 22nd Ave., Miami; disemart.com. 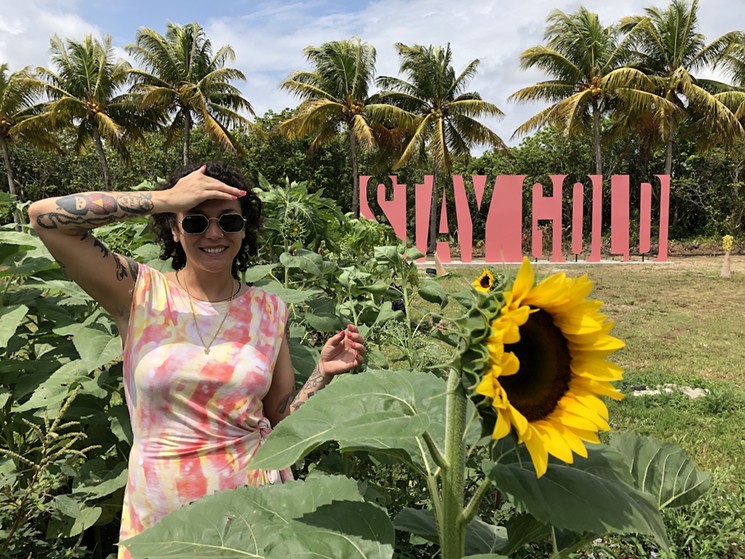 Jessy Nite with Stay Gold.
Logan Fazio
Best Visual Artist: Jessy Nite. Whether it’s in murals, sculptures, zines, installations, or even clothing, Jessy Nite’s colorful, uplifting art is everywhere in Miami. She’s prolific these days, with commissions from Nike on Lincoln Road, Facebook’s Miami offices, Soho Beach House, and others — not to mention an Instagram account that gives viewers a fun peek at her daily works-in-process and artsy adventures. Her latest big commission is the massive, permanent Stay Gold installation outside the famous Robert Is Here produce stand in Homestead, which Nite completed earlier this year in partnership with the O, Miami Poetry Festival. jessynite.com; instagram.com/jessynite.

Best Street Artist: Serge Toussaint. Of the many street artists and muralists working in Miami — and there are legion — only one has created work that’s synonymous with Little Haiti: Serge Toussaint. Born in Port-au-Prince, Haiti, in 1963, Toussaint moved to the States when he was 12 and found his way to South Florida in 1994. Soon he was painting for local shops, adding style and color to text-based signs and shop windows. From that practice grew a career as an artist. And though Toussaint’s work can be found across South Florida, Little Haiti is the epicenter. His depictions of Haitian cultural figures — everyone from centuries-old political leaders to modern-day dancer Ajhanou Uneek — are a reminder of the neighborhood’s unique and vibrant culture. That’s become more essential in recent years, as gentrification threatens to disrupt Little Haiti residents’ way of life. Toussaint has responded to that threat by adding the phrase “Welcome to Little Haiti” to many of his works, naming his home as a way of protecting it. instagram.com/toussaint.serge
KEEP MIAMI NEW TIMES FREE... Since we started Miami New Times, it has been defined as the free, independent voice of Miami, and we'd like to keep it that way. With local media under siege, it's more important than ever for us to rally support behind funding our local journalism. You can help by participating in our "I Support" program, allowing us to keep offering readers access to our incisive coverage of local news, food and culture with no paywalls.
Make a one-time donation today for as little as $1.
New Times staff and contributors