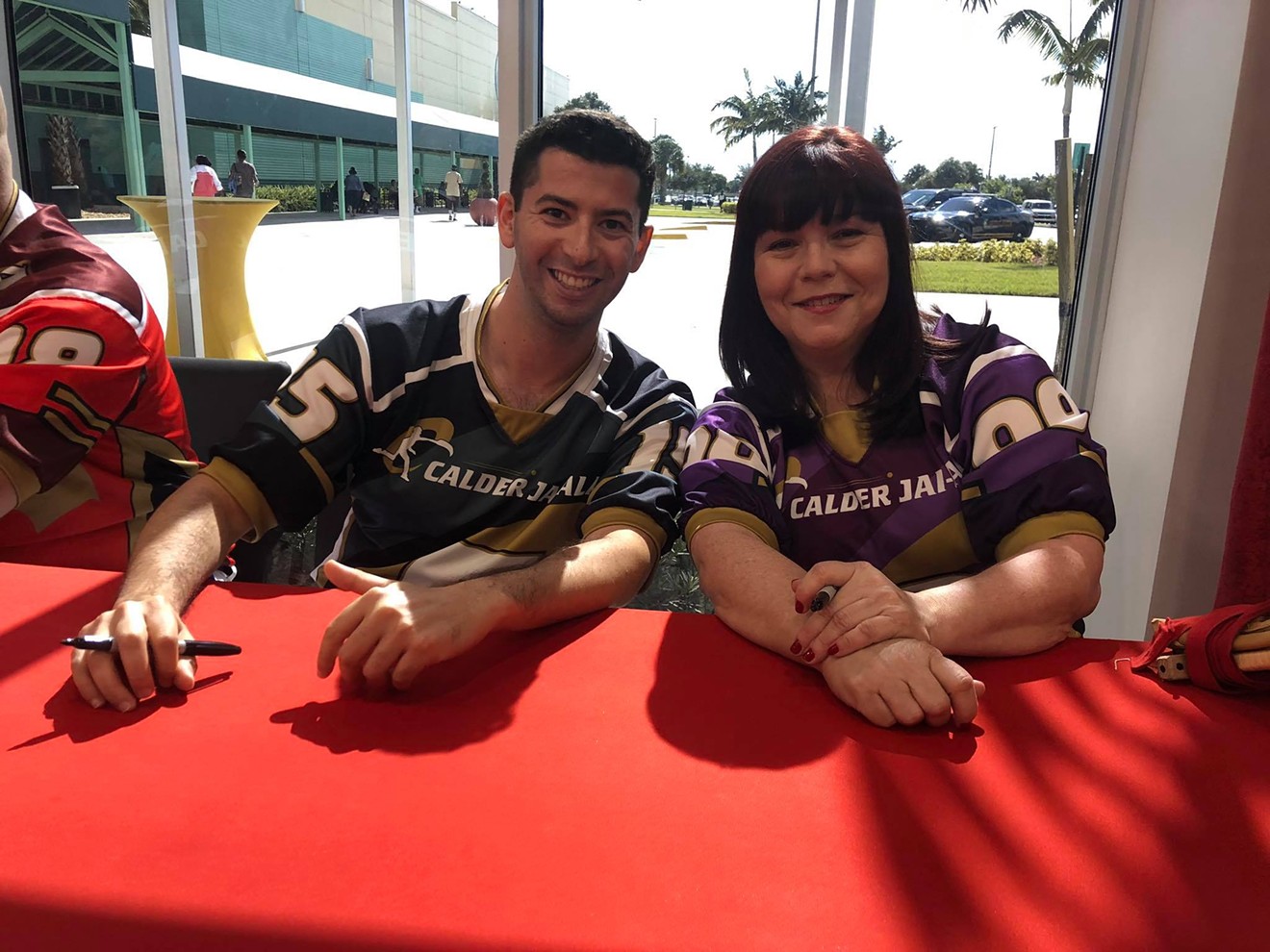 She grew up in the 1970s surrounded by the sport. Her father was an amateur player whose air conditioning business was just down the street from the amateur court in Medley. Her mother worked as a tele-bet girl at Miami Jai-Alai, walking around the audience and taking bets from the fans dressed to the nines.

On late nights when gambling wasn’t allowed at Miami Jai-Alai, players would host special, longer partidos that children could attend. Smith’s father took her to watch the matches, where balls ricocheted off the walls and into players' handheld cestas at lightning speeds. Suddenly, the sport that had lingered in the periphery of her life shot to the forefront.

But it wasn't until 1984, when Smith was 19, that she attempted to play herself. She went to the North Miami amateur court with her sister and told the owner she wanted to play. They were turned away.

“He said it was a man’s sport; it wasn’t for girls,” says Smith. “I was told women don’t have the power, coordination to play this sport.”

That didn’t stop her. Smith enrolled in a training program at World Jai Alai and immersed herself in the game. But she was still being denied the court time male players were getting. In 1985, she took matters into her own hands and filed a sex discrimination complaint with the Dade County Board of Appeals against Miami Amateur Jai Alai, and the school’s owner, Howard Kalik. After the story made headlines, Kalik relented and let Smith play in the amateur league before the complaint could make it to the board.

Thirty years later, at 54, Smith is now the first female professional jai alai player in the world. She forms part of Calder Casino’s new jai alai team, which is modernizing the centuries-old Spanish game. Her royal purple jersey is emblazoned with her number "8" on the front and her hard-earned nickname, “La Primera,” on the back. When she played in Calder Casino's grand opening exhibition game Wednesday, fans were on the edge of their seats as the stocky 5'2" player stole the pelota's serve.

When Florida Amendment 13 passed last November, banning dog racing, it caused a resurgence of jai alai as another avenue for wagering. Calder Casino officially opened its jai alai fronton in Miami Gardens this week, a new addition to its roster of gambling options. The inaugural jai alai season will run daily Wednesday through Sunday through June 30. A second season is scheduled for August and September.

After Smith was finally allowed into the amateur league with her sister in 1985, she played for about three years until competing forms of gambling and the 1988 players' strike derailed the game’s popularity. Labor tensions split players along the picket line. Smith sympathized with the striking players, but she was still employed by Dania Jai Alai as a pari-mutuel clerk, and later as an assistant money room manager. Dania Jai Alai eventually fired her. Then tragedy struck when Smith's sister was killed in a car accident. Smith realized she needed to move on.

“I had to pursue a career that was going to let me have a house and put food on the table, start a family, and it wasn’t going to be jai alai,” says Smith. “I had to turn my focus elsewhere.”

She put her cesta and helmet in the far reaches of her closet, taking them out only occasionally to show her daughter. They stayed there until last December, when longtime friend and professional jai alai player Dennis Getsee called Smith to tell her Calder Casino was forming a woman’s league. Smith is one of two female players on Calder Casino’s roster; Deborah Mitchell begins in August.

Smith poses with the rest of Calder Casino's jai alai roster.
Courtesy of Calder Casino
“I was hesitant at first. I was older,” says Smith. “It’s easier for me on this smaller court.”

She grabbed her 34-year-old cesta, brushed off her doubts, and made it to the court. The Calder court is 111 feet long, about 60 feet smaller than a full-size court, one of the intentional changes made to modernize the sport.

“We built our court to be a more appropriate size for the players we’re looking to attract,” says Matt Harper, senior director of marketing at Calder Casino. “One-hundred-eighty feet is a tough court for many players to play on. The shorter court will allow for more competitive play."

Though decades have passed, Smith's style and technique have not wavered. Her bote pronto and dejada garnered her a standing ovation from the male players during tryouts for the team. In February, Smith officially signed with Calder Casino, becoming the first professional female player in the country.

"I personally am so happy and grateful to be part of this forward-thinking team," she says.

Last month, Smith was in the amateur court when a teammate arrived with his two children. His daughter watched Smith put on her helmet and strap on her cesta.

“It could never have occurred to her that women could play,” says Smith. “She whispered to her dad and said, 'Hey, she plays too.'”

Jai Alai at Calder Casino. Noon, 3 p.m., and 6 p.m. Wednesday to Sunday through June 30 at Calder Casino, 21001 NW 27th Ave., Miami Gardens; 305-625-1311; caldercasino.com. Admission is free.
KEEP MIAMI NEW TIMES FREE... Since we started Miami New Times, it has been defined as the free, independent voice of Miami, and we'd like to keep it that way. With local media under siege, it's more important than ever for us to rally support behind funding our local journalism. You can help by participating in our "I Support" program, allowing us to keep offering readers access to our incisive coverage of local news, food and culture with no paywalls.
Make a one-time donation today for as little as $1.