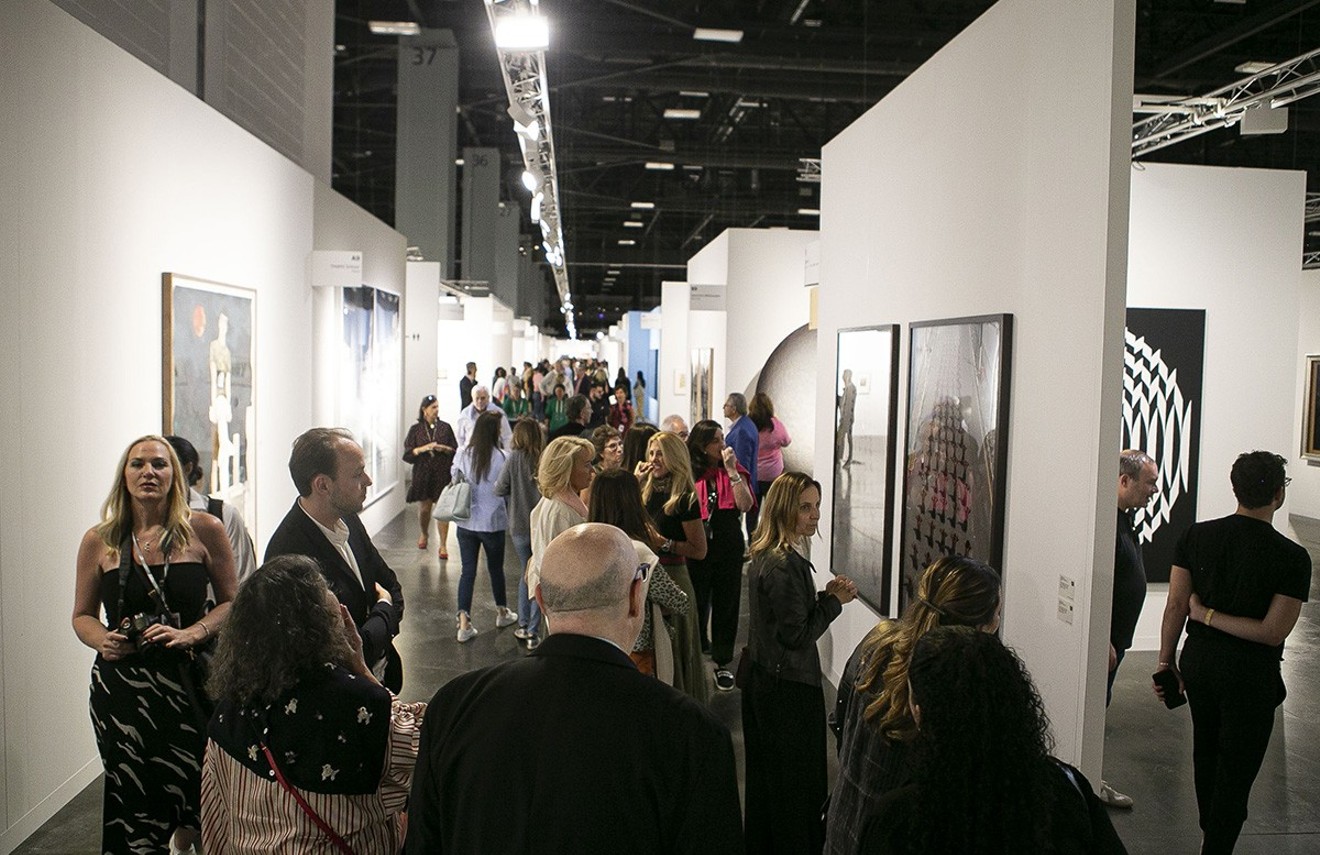 Art Basel Miami Beach won't take place in 2020, owing to the coronavirus pandemic. Photo by George Martinez
Art Basel, the world-renowned international art fair, had already canceled its events in Hong Kong and Basel, Switzerland, this year, so it seemed like it was only a matter of time before December's Miami Beach edition would meet the same fate.

Today, MCH Group, the company behind Art Basel, confirmed as much when it announced that the Miami Beach show, scheduled for December 3-6, is officially canceled.

"Given the current situation regarding the pandemic’s impact, which spans from South Florida to other parts of the country and the world; limitations and uncertainty about the staging of large-scale events; international travel restrictions and bans, as well as quarantine regulations within the United States and internationally, alongside other factors, Art Basel has no other option but to cancel the 2020 edition of Art Basel in Miami Beach," Art Basel organizers stated in a press release.

Even if things go back to "normal" in December, Art Basel's absence from Miami's winter culture calendar will have an enormous economic impact on the area. Hotels, restaurants, and nightclubs typically see a substantial boost in revenue during the first week of December.

"It is with great regret and disappointment that we announce the cancellation of our December show in Miami Beach, as we know how crucial our show is for our galleries, as well as for the greater Miami arts community and economy," Noah Horowitz, director of Art Basel's Americas division, was quoted as saying in the press release.

Art Basel promises to return in 2021 with its shows in Hong Kong, Basel, and Miami Beach. The Miami Beach edition is scheduled for December 2-5, 2021.

In the wake of Art Basel's cancelation, the satellite fairs that coincide with the exhibition at the Miami Beach Convention Center also announced their plans.

Art Miami says that its fairs, which also include Context and Aqua, will be canceled in 2020, however, it plans to move forward with Art Palm Beach in January 2021 and Art Wynwood in February 2021. While NADA announced that its Miami exhibition will transform into a hybrid in-person and online event spread over six cities. (It's unclear if Miami will be one of those six cities.)

In the meantime, Art Basel is hosting Online Viewing Rooms (essentially a virtual art fair) on September 23-26 and October 28-31. Dubbed "OVR:2020," the September event will focus solely on works produced during our tumultuous present, while October's "OVR:20c" will feature works made from 1900 through 1999. Both shows promise to connect "the world's leading galleries with [Art Basel's] global network of collectors and art enthusiasts."

Scope Art Fair will also join the virtual art-fair game when it hosts Scope Immersive September 17-20. The show will feature 30 exhibitors in a digitally curated and interactive space. And Art Miami says it will host Miami Art City, an online show that will "replicate the art fair experience online" December 1-6, the original run dates of the in-person event.
KEEP MIAMI NEW TIMES FREE... Since we started Miami New Times, it has been defined as the free, independent voice of Miami, and we'd like to keep it that way. With local media under siege, it's more important than ever for us to rally support behind funding our local journalism. You can help by participating in our "I Support" program, allowing us to keep offering readers access to our incisive coverage of local news, food and culture with no paywalls.
Make a one-time donation today for as little as $1.