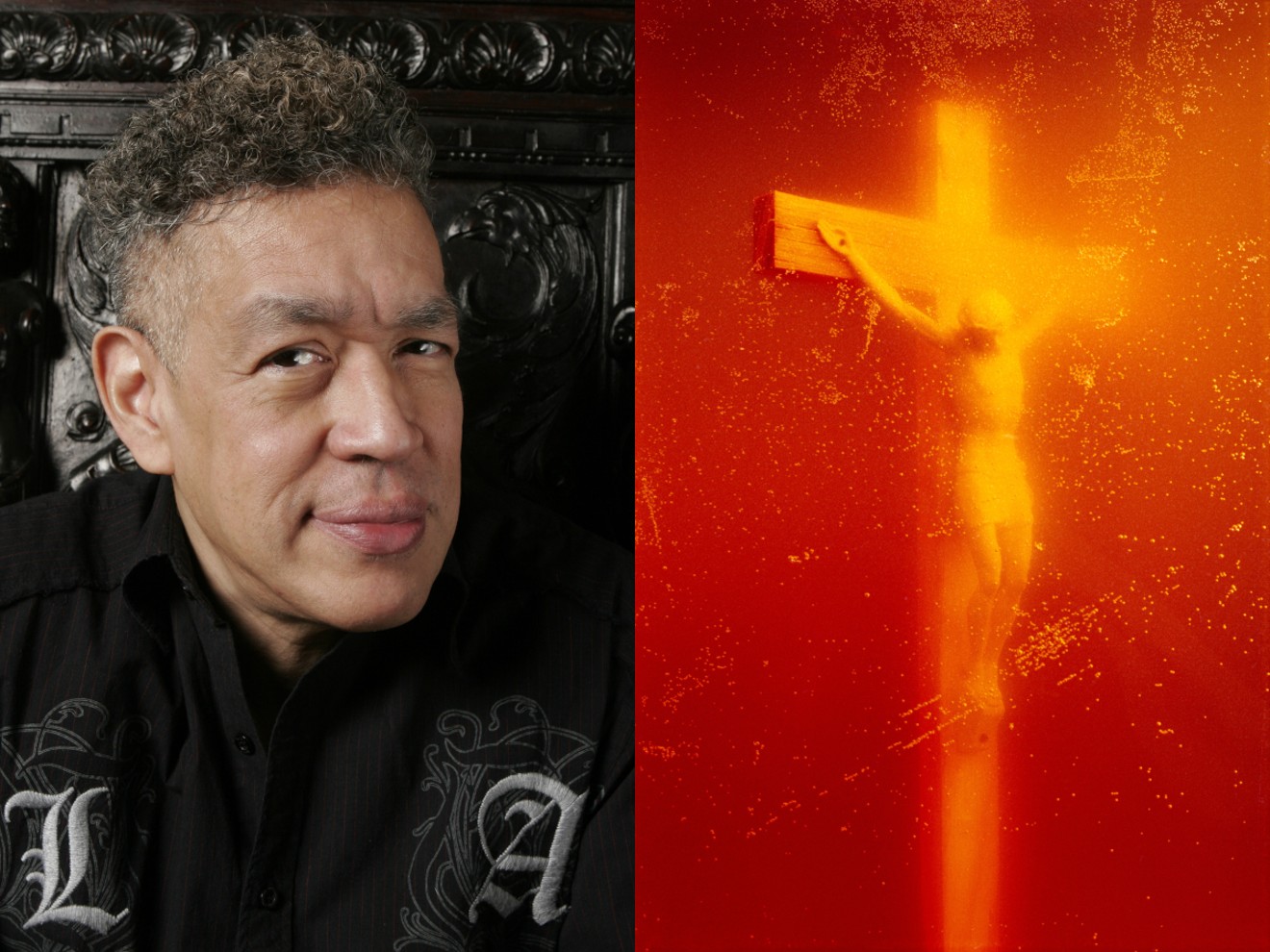 Since its debut in 1987, Andres Serrano's Piss Christ has been mired in controversy. Photo by Irina Movmyga/Andres Serrano, courtesy Christie's 3.0
One of the most controversial artworks in American history is a photograph of a crucifix suspended in urine called Piss Christ. Andres Serrano's work has been torn up on the floor of Congress and smashed with hammers on two separate occasions. Yet perhaps the most offensive thing that's been done to the artwork is happening this week in Miami: It's been made into an NFT.

The nonfungible token, which functions like a certificate of authenticity for digital images, is being auctioned off as part of Next Wave: the Miami Edit, a sale on the NFT marketplace Christie's 3.0. The auction is taking place at the Gateway, a "web3" festival in downtown Miami during Miami Art Week. Bidders can purchase the work only with the cryptocurrency Ethereum, and the starting bid is 20 ETH (approximately $25,400).

None of these words are in the Bible.

The NFT alters the work in one significant way. According to Christie's, it's not a still image but a "dynamic video" that "replicates three historic vandalisms of the original 1987 photograph on a yearly cycle."

In a statement, Serrano said, "Piss Christ is a reflection of my work, not only as an artist but as a Christian. I am glad that this artwork is now eternal, taking on a new life in the metaverse."

Serrano, who also designed the cover of Metallica's album Load, is famous for using bodily fluids in his work. Piss Christ, which debuted in 1987 at Stux Gallery, caused a public scandal, as many religious Christians saw the work as blasphemous. In 1989, Republican senator Al D'Amato protested against the National Endowment of the Arts' support of Serrano's work in Congress, tearing a copy up in an incident that arguably launched the Culture Wars of the 1990s. Serrano himself was raised Catholic, and one could argue that his use of bodily fluids in a work of art centering on Christ could be considered an act of religious devotion rather than desecration.

Christie's, one of the foremost global art auctioneers alongside perennial rival Sotheby's, was an early adopter of the NFT as a saleable artistic medium. Last year, it sold an NFT artwork by Beeple for the equivalent of $69 million, causing observers to wonder things like "How much?" and "What the fuck is an NFT?"

For those needing a refresher, an NFT (nonfungible token) is a digital file format, like a JPEG or an MP3, produced through an ecologically harmful minting process similar to cryptocurrencies like Bitcoin or Ethereum. Because every NFT is unique, it can function as a certificate of authenticity for a digital image or video. Its supporters have positioned it as a way to create the same level of value and scarcity for digital artwork, which can be copied and pasted at will, as a regular artwork like a painting or sculpture.

The fine-art approach to NFTs became overshadowed last year, however, by labels like Cryptopunks and Bored Ape Yacht Club minting thousands of NFTs as unique digital collectibles — sort of like Pokémon cards, except you can't even hold them and see the holographic effect on the background. Crypto investors and celebrities began hawking apes left, right, and center, citing their investment potential. Following a massive crash in the crypto market earlier this year, many of these NFTs have cratered in value, and following the scandal surrounding crypto exchange FTX, many are saying the NFT market is nothing more than a digital pyramid scheme.

This does not seem to have deterred Christie's, however, which argues that Serrano's piece will be protected from further vandalism by being preserved digitally on the blockchain.

Next Wave: the Miami Edit is taking place from now until Wednesday, December 7. All of the NFTs are viewable onsite at the Gateway or at nft.christies.com. A representative could not be reached to tell New Times whether or not the actual photograph will be on display in Miami any time soon.

Revisit New Times' 1995 interview with Serrano.
KEEP MIAMI NEW TIMES FREE... Since we started Miami New Times, it has been defined as the free, independent voice of Miami, and we'd like to keep it that way. With local media under siege, it's more important than ever for us to rally support behind funding our local journalism. You can help by participating in our "I Support" program, allowing us to keep offering readers access to our incisive coverage of local news, food and culture with no paywalls.
Make a one-time donation today for as little as $1.