Reddit user iBleedOrange
To live in Miami is to constantly feel as if you're trapped in an abandoned David Lynch film. Seminude men with face tattoos rollerblade through traffic in broad daylight, dilapidated buildings could be infested with anything from peacocks to bears to trained circus seals, and flaming boats just sometimes drive down the highway and everyone acts like things are cool.

Earlier this week, an anonymous Imgur user posted a GIF of a navy-blue pickup truck towing a boat on a random highway while the boat spit gigantic flames behind him. A Redditor who goes by iBleedOrange then spotted the clip on the website and posted it to Reddit's r/WTF forum, where the clip then blew up, no pun intended.

It's unclear how old the footage might be, but the GIF was posted online only four days ago. (Redditor iBleedOrange told New Times via direct message that he had no idea who posted the clip originally.)

The only thing more astounding than the clip might be what happened next: A group of Redditors used Google Maps to pinpoint the location where the footage was taken. Naturally, it was Miami-Dade. The clip was filmed directly across the street from Jorge Mas Canosa Middle School on Newton Road in far Southwest Miami-Dade County.


"Maybe if I drive faster I'll put the fire out"

Someone then cross-posted the clip on Reddit's r/Miami thread, where local residents typically chat about South Florida politics and tips for apartment hunting. "Well, that looks familiar," user MG87 wrote alongside the GIF. The Redditors then got to work: A user named "_Hi_Im_Paul" correctly ID'ed the intersection outside Mas Canosa Middle School, and then someone named "user0126" eventually posted the clip's exact latitude and longitude:

Google Maps
If you look in the car's rear-view mirror in the GIF, you can catch a glimpse of these two light posts for a second, as a few other Redditors pointed out:

Google Maps
Here's an aerial map. It appears the footage was taken directly in front of the school: 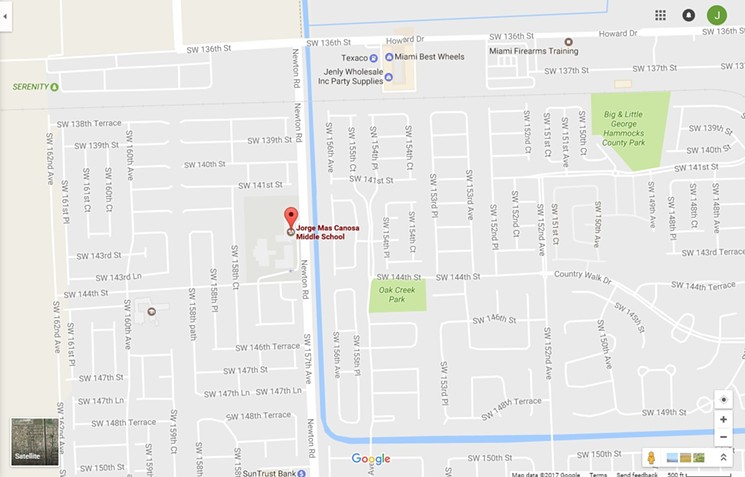 Google Maps
One user, named "ShadyInternets," claimed online that his or her mom drove behind the truck for a few miles and then, buggin out, called her kid:


if that is in miami (trees/houses look like it could be) my mom was down there visiting family and saw it, and followed it lol

she called me freaking out and cracking up. she thought she was losing her mind because she saw it still in the driveway down the street when the dude was hooking it up to the truck. she said it looked like he was unhooking it, but when they turned around to get a better look it was gone.... she then saw the smoke and went towards it and eventually caught up and found him backing the boat into a canal ramp area, then he just sort of sat there next to it while it burned.

she had a few pics and was so happy because she was like, nobody would have believed me if i didnt go back to get a picture! dude apparently lives down the street from my grandma lol

As the saying goes: Pics or it didn't happen, bro. In the meantime, we've reached out to Miami-Dade County Police to see if they have any info about the boat's owner or what in hell happened.