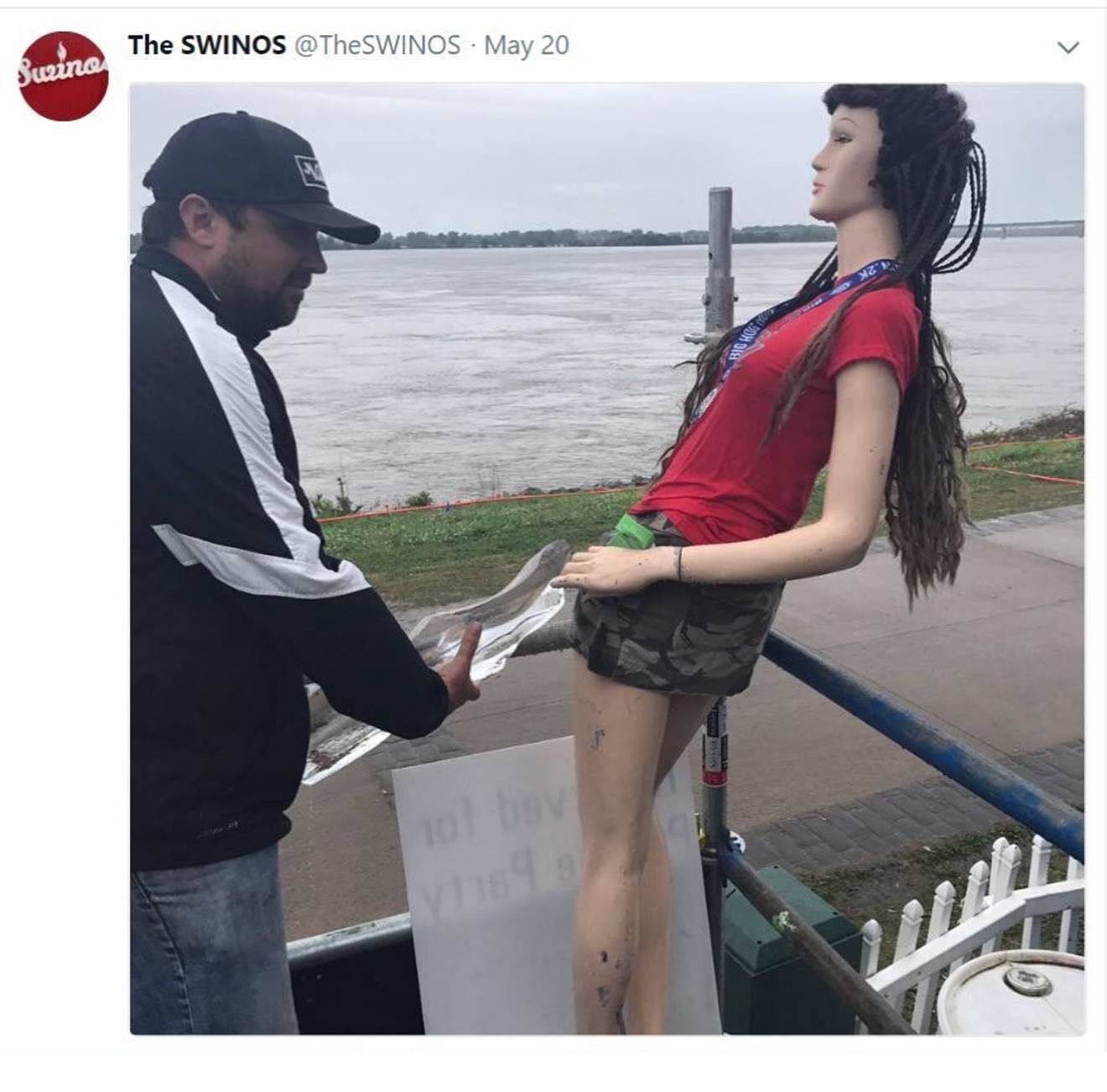 via Twitter
Joshua Cooper, a Tallahassee political consultant paid more than $500,000 by Florida Gov. Rick Scott to dig up dirt on Scott's enemies over the years, swears the photo above was simply a snapshot taken at an unfortunate angle. Cooper is adamant the photo absolutely does not show him holding an ice penis next to a mannequin's groin.

"It is not at all what it looks like," says Cooper, who spends his spare time as a semiprofessional barbecue chef and insists he was simply throwing away a large slab of ice while cooking in a Memphis competition. Someone took a snapshot at exactly the wrong moment and posted the photo online, Cooper says, making an accidental sexual tableau with the female mannequin.

The photo has been making the rounds in Florida political circles since it was posted online in May. Though Cooper says the image was deleted upon his request, he says one of his many enemies in Tallahassee is recirculating the image to discredit him.

"That was a photo one of my barbecue teammates took," Cooper tells New Times. "That was our ice luge. It melted, so I was picking it up and throwing it over the fence there. But from the angle he took the picture, my teammates thought it looked funny and posted it online."

He says he has three daughters and a young son and clarifies that he does not hump mannequins.

His barbecue team is called the Swinos. Their slogan, according to their Twitter account, is "Getting it moist, and keeping it there."

When he's not grilling meat, Cooper has hauled in serious cash as one of Governor Scott's top campaign consultants. According to Florida state records, Republican groups and PACs have paid him or his firm, Strategic Information Consultants LLC, more than $768,000 since 2012. Roughly $517,000 of that money came from Scott's political action committee Let's Get to Work. (Cooper also works with two other groups: Next Generation Strategies and JTKE LLC.)

Scott also funneled taxpayer money Cooper's way a few years ago. In 2011, the Miami Herald/Tampa Bay Times Tallahassee Bureau reported that Scott's office billed taxpayers for $25,000 after Cooper's firm conducted background checks on the governor's behalf. It's unclear why that happened — the Florida Department of Law Enforcement typically conducts criminal-history checks on new hires in the governor's office. Scott told the news agency there were no records explaining why he paid Strategic Information Consultants tens of thousands of dollars from state coffers.

Scott's office did not respond to a request for comment yesterday regarding the photo.

Cooper has been fairly successful in his off-hours work as a "competitive grillmaster." He was briefly a contestant on the Fox reality show MasterChef, which is hosted by the howling restaurateur Gordon Ramsay. Cooper claims his meat-obsessed teammates were the ones who ultimately got him in trouble.

"You can write your story and try to get a couple of clicks. It is what it is," Cooper says. "But it's just stupid. It's a nonstory. Given what’s happening with so many elected officials in the capital with so many real scandals going on, it seems like someone is trying to do a little misdirection and throw some heat onto a political consultant who has no skin in the game."

Asked whether he's the sort of person who might joke around with an ice penis in his spare time, he says in a hushed voice: "No, I was just picking up a piece of ice."