Ariana Grande Is Not Your Sex Kitten 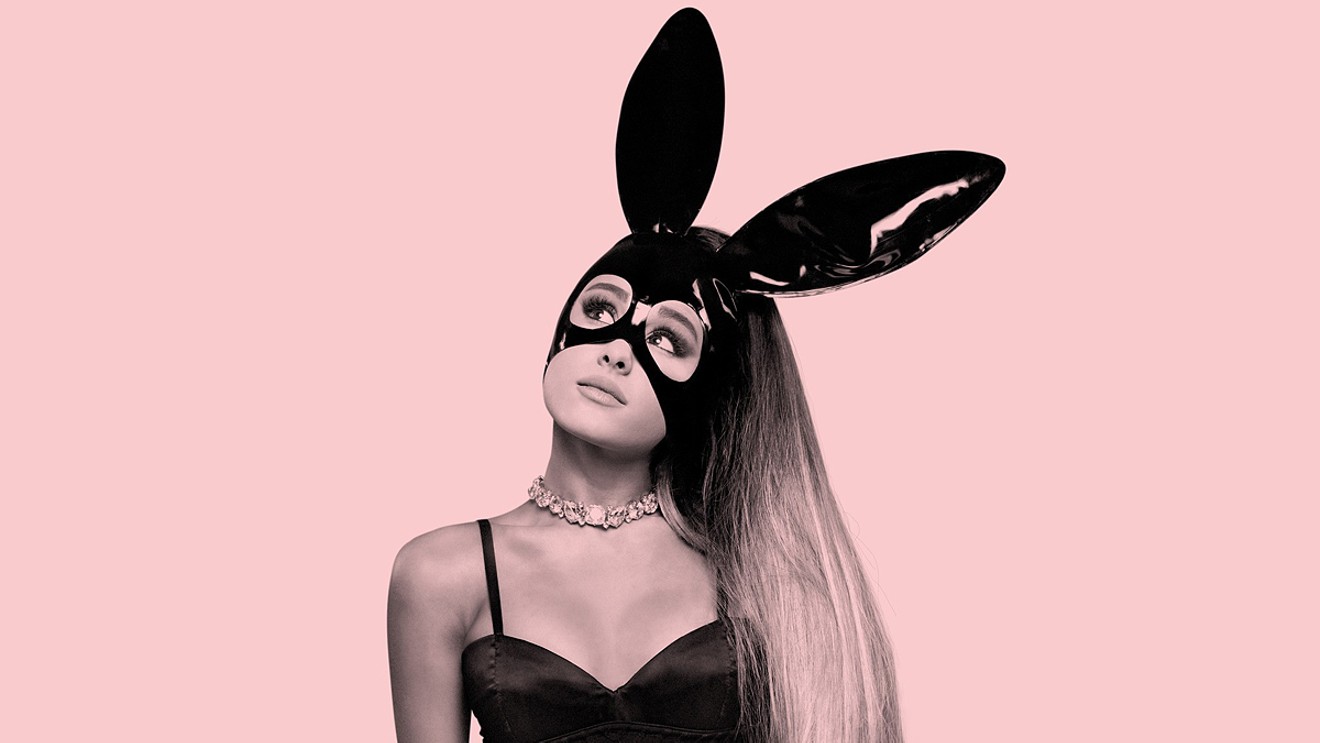 Ariana Grande is the anti-Playboy Bunny. Courtesy of Republic Records

The transition from child starlet to mainstream pop diva can be rife with awkward and uncomfortable moments, as young stars become adults right in front of the world's eyes. Every pop star who's made the leap has put her own stamp on the big change.

Christina Aguilera graduated from The Mickey Mouse Club and introduced the world to her alter ego, XXXtina: the "Dirrty," chaps-wearing, seemingly contradictory singer of proto-sex-positive feminist anthems. Fellow MMC castmate Britney Spears also famously struggled as she came to terms with her handlers' hypersexualization of her image at a young age. And more recently, Miley Cyrus broke all the Disney codes of conduct when she ditched the Hannah Montana getup and showcased the ultimate display of juvenile attention-seeking behavior with Robin Thicke on the VMA stage.

But of all of pop music's biggest stars of the past 20 years, Ariana Grande has made the most convincing and seamless transition from ingénue to independent female artist. Unlike the aforementioned Disney princesses, Grande got her start at Nickelodeon, where she starred in sitcoms such as Victorious and Sam & Cat. In the seven years since she first appeared on TV screens, Grande has graduated to presenting her own music, image, and sexuality on her own terms — following a path unlike any of her colleagues'.

Stars who play by the pop-star handbook often play up their sexual presentation in a physical way: Out come the fishnets, skin-tight bodysuits, and risqué music videos. These attempts to take control of their own sexual exploitation often do little more than fuel it. But compared to Britney's schoolgirl getup or Christina's chaps, Grande's wardrobe is tame. She saves the celebration of the joys of liberated sexual exploration for her lyrics, claiming her power by singing, rather than showing, her desires. "Do as I say/If you wanna get the job, you better know who's the boss," she sings in the Nicki Minaj song "Get on Your Knees." When it comes to owning and defining her sexuality, Grande is most certainly the boss.

Though Grande wears cat-ear headbands, she's not interested in playing the sex kitten.

That's not to say it's been smooth sailing all along. In 2015, a video of Grande licking doughnuts on a dare at a bakery was leaked to TMZ. It was a childish but gross stunt that might've otherwise been no more than meme fodder, but the video drew the ire of conservatives when she was heard on tape saying she hated America. The throwaway comment was pretty obviously meant in jest in reference to the sugary confections on the counter, but the damage was done. Grande was forced to apologize and canceled a handful of appearances while the controversy died down.

Other than that unfortunate run-in with a hidden camera, though, she has traversed into mainstream-pop adulthood relatively unscathed — avoiding the head-shaving incidents or ill-advised marriages her counterparts have suffered. That's due, in part, to her ownership of her own weirdo approach to sexuality. Though Grande wears cat-ear headbands and PVC outfits onstage, she's not interested in playing the role of a sex kitten. In her world, a pop star coming into her own sexual maturation and awareness owes little explanation to her audience.

From the release of her first hit single, "The Way," she took a refreshing approach to shedding her child-star skin. The video for the song contained the usual post-Disney fare: A pastel color palette and roomful of balloons were curated corporate signifiers of Ariana's "innocence." But Grande turned the messaging on its head by ending the video with a mini make-out session with Mac Miller.

The onscreen kiss has long been a tool for young pop stars to scream their adulthood to the world. But while most of those kisses are planned and highly choreographed, the candid video reel in "The Way" suggests the smooch between Miller and Grande might have been spontaneous. They approach each other nervously at first, and after the kiss, Grande stares at the camera like a deer in headlights before they both break out into giggles. In the media world in which Grande operates, women often only appear to be in charge while men pull the strings behind the scenes. A young woman making an on-the-spot, autonomous decision about the way in which she'll be newly represented, in an industry that at once exploits women's sexuality while demanding they present themselves as chaste, is no small act of rebellion.

Late last year, Grande took to Twitter to describe an experience that left her feeling objectified in public. While eating with Miller, who's now her boyfriend, a fan yelled out his approval to Miller for "hitting that," in reference to Grande. She expressed feeling "sick and objectified." Critics lined up to slut-shame her in response, arguing that her sexy songs and image made her a just target for such abuse. Grande fired back: "Expressing sexuality in art is not an invitation for disrespect... just like wearing a short skirt is not asking for assault." It's not true, she emphasized, that "if we look a certain way, we are yours to take."

Three albums into her career, Grande has cemented her spot on the pop music throne while defining her sexuality on her own terms. The a cappella rendition of her powerhouse ballad "Dangerous Woman" is the ultimate manifestation of her brand of sexuality — kooky and silly but self-assured and self-defined. In the video, she sings before a photo-shoot background while wearing a black PVC outfit complete with a latex mask and bunny ears. It's a ridiculous cross between a furry costume and an S&M outfit, but she belts out the song without reservation, stopping to goof off along the way. She flops her bunny ears to and fro as she laughs her way through an extended air guitar solo midsong. Grande makes it her prerogative to wear a typically sexualized outfit, but she pumps the brakes on the expectations that precede it. The only performance she owes her audience is a musical one.

At the 2016 MTV Video Music Awards, Grande performed her most explicitly sexual song to date, the Nicki Minaj collaboration "Side to Side." Another artist might have hypersexualized the performance to cartoonish effect. Grande, on the other hand, spun some soul cycle on a stationary bike while sporting satin workout pants and a robe. She doesn't feel the need to beat the audience over the head with the messaging. She knows they'll figure it out eventually.