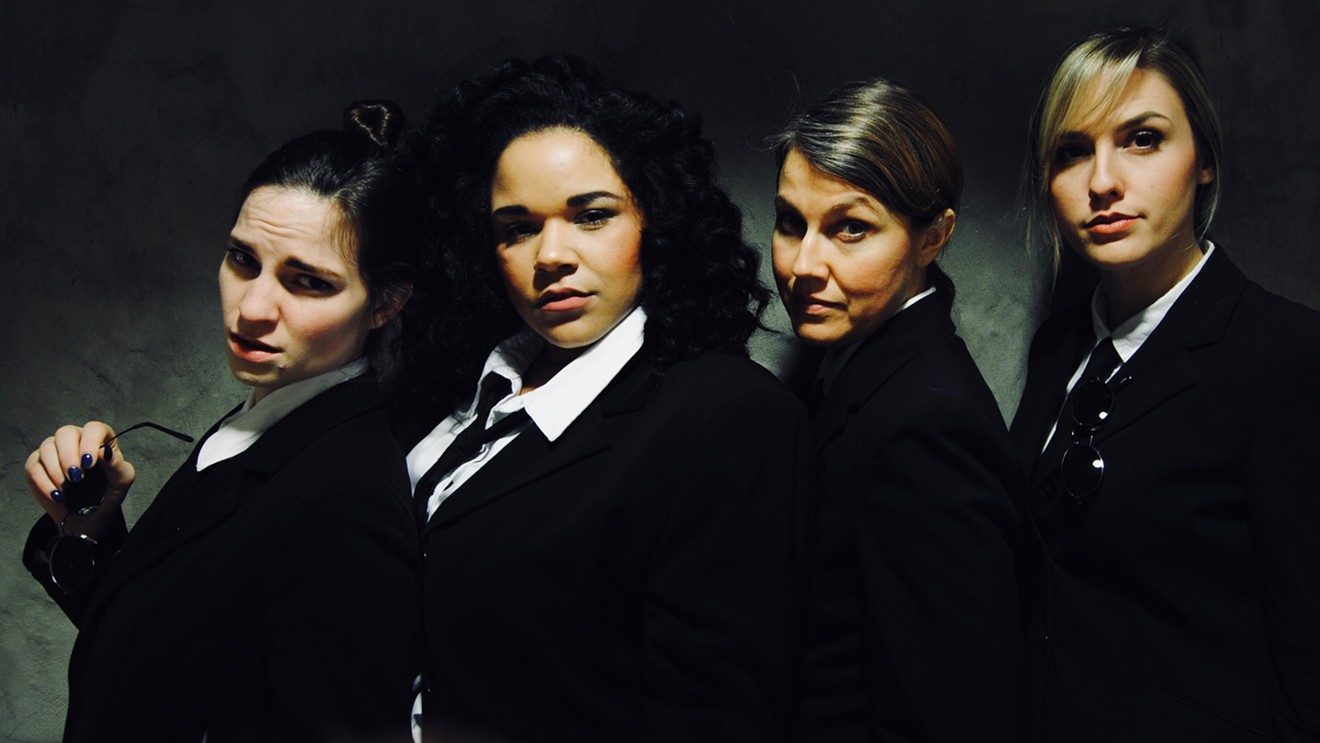 The cast of Reservoir Dolls. Shannon Ouellette
As Hollywood continues to unpack more casualties from the #MeToo movement, women are fighting back by creating the kind of work they want to see and the roles they want to play. Erika Soerensen’s Reservoir Dolls, presented by the Outré Theatre Company at the Pompano Beach Cultural Center, flips the script in an all-female stage adaption of Quentin Tarantino’s 1992 testosterone-driven heist film, Reservoir Dogs.

“I grew up in Chino, [California], and ended up at Pasadena’s Royal Academy of Dramatic Arts,” says Soerensen, an actor, playwright, and roller-derby skater. “When I saw the film version of Reservoir Dogs, I thought, This is cool, but why don’t women ever get to play roles like this?”

That’s when she thought of adapting the iconic script for the stage. It took more than a decade for Soerensen to get fed up with some of the parts she and the actresses she knew were being offered and decided to give playwriting a shot. When she did, she dug in, spending hours shaping the nonlinear narrative, preserving the rhythmic dialogue, changing all the pronouns, and breathing life into roles that, she says, women are rarely asked to inhabit.

“It’s not meant for the actors to play the parts like they’re Steve Buscemi in a dress,” Soerensen jokes, referencing the actor who played Mr. Pink in the Tarantino film. “It’s not written for women to sit and look pretty. They all start cursing — throwing F-bombs — and saying all kinds of vulgar things from the beginning of the play, and the audience gets more and more comfortable and eventually loves it.”

The play opened to much acclaim at Blue Room Theatre in Chino in 2009, with Soerensen playing Ms. White, and has had numerous productions in cities such as Seattle, Las Vegas, and Portland, Oregon, before returning as a main-stage production in Chino. Soerensen has alternated playing a few of the lead roles and has directed a few iterations. Now it's landed in South Florida, coinciding with the recent allegations of Tarantino muse Uma Thurman of sexual assault by Harvey Weinstein and of sadistic treatment by Tarantino, who Thurman says caused injuries to her neck and knees when he forced her to drive a dangerously broken car rather than use a stunt double.

The Outré Theatre’s artistic director, Skye Whitcomb, saw Dolls on the West Coast and asked Soerensen to stage it in Florida — this time with the play’s first female director, Shannon Ouellette.

“Seeing it done with women in the roles changes some of the relationships,” says Ouellette, who is also an actor. “They get to get in there and find some interesting moments... and they have fun.”

Ouelette’s vision stays true to the film’s 1970s settings and costumes while assembling a diverse cast of women of all ages, shapes, and ethnic backgrounds who, she says, are making bold statements in this play “just by the nature of who they are.”