Four Miami Artists to Watch in 2018

Andres Martinez
Driving on I-95 at 5 p.m., you pass a hot-orange light peeking through the leaves of roadside trees. You have plenty of time to notice it because traffic is almost always crawling. But you barely do, the same way you barely notice your elderly neighbor sitting in a lawn chair in his garage every day or the ferns and vines that cover your mother's mango trees.

For Miami native Andres Martinez, this is the stuff of art. He says this after mentioning the bad sculptures littering town during Art Basel.

"My work is about life itself," he says. "We should see our life as art. We are all artists."

For his first solo exhibition in almost ten years, "Can I Live?" showing at Laundromat Art Space (5900 NE Second Ave., Miami; 303-960-7810; laundromatartspace.com), Martinez hopes to immerse viewers in an homage to the Miami he knows. "You’re not gonna know whether to call the cops or just let it go," he says of some of the planned work. Some material was culled from his own memories and experiences, while others address pointed issues such as climate change and police brutality, albeit with tongue firmly placed in cheek. One aspect of the show will include a basketball hoop where participants can throw the world (maps) into a heap of trash, earning points while doing so.

But the humor doesn't eclipse what is ultimately a body of personal work. After spending a summer tarring roofs with his uncle, Martinez began using the material in a series of paintings that combine thick, industrial texture with simple line drawings. One piece gathers objects from his childhood, pulled from his mother's house right before she moved. But instead of feeling opaque or coded in first-person narrative, the artwork reveals the complexities of what we so often ignore.

"That’s something that art is good for, like a mirror," Martinez explains. "At the same time, art is in the eye of the beholder. That’s what I hope people experience." 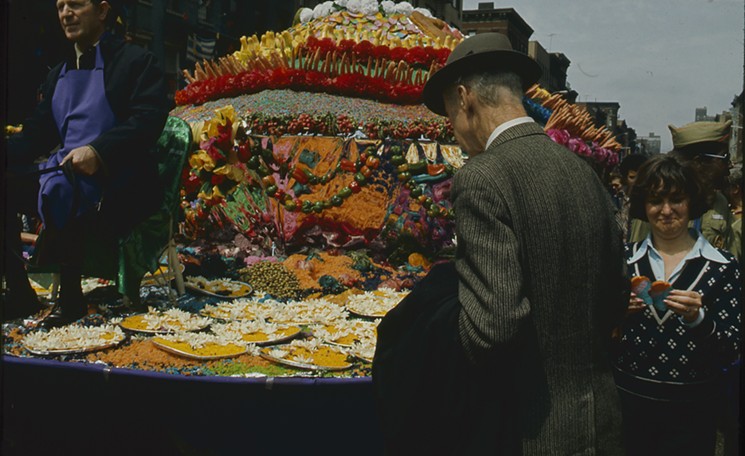 Antoni Miralda's Movable Feast in New York, 1974.
Antoni Miralda
Personal histories are typical fare for fine art, but the work of Antoni Miralda addresses other hidden histories. The Spanish artist splits his time between Barcelona and Miami, the latter of which will host his latest effort, The Maggic Banquet, part of the Miami Dade College Museum of Art and Design series Living Together. Miralda has been making work since the late '60s, although his first show in Miami wasn't until 1982.

"When I first came here, I sort of felt that this was a great platform because it has that mixture, that melting-pot idea, but also because it’s so physically and mentally close to the Caribbean and Latin America," Miralda reflects. "Because of that, I developed many other projects around the idea of a city’s taste and tongues."

One of those projects explored the cuisine of the South American and Caribbean diaspora. After gathering recipes, Miralda took them back to their countries of origin in a sort of homecoming. In another work, he displayed food passed from mother to daughter and took photos of viewers' tongues.

"I’ve always been interested in the layers of culture that make food integrate more and more to people’s habits and rituals, connecting their own roots and wishes and desires," Miralda explains. "It makes wonderful connections to the Earth, to texture and color. It connects to other symbolic meanings."

The Maggic Banquet makes these connections via the Maggi bouillon cube, created in the early 20th Century by Swiss businessman Julius Maggi. Miralda plans to present a buffet table of Latin and Haitian dishes using the seasoning. Attendees will be able to taste each item while learning about the MSG-laden foodstuff that often replaces more nutritious bases. A zine will be published by Exile Books after the show, taking place February 10 on the terrace at Exile Books (5900 NW Second Ave., Miami; 917-903-0907; exilebooks.com).

Though the political charge is undeniable, Miralda chooses to concentrate more on the poetry of his subject matter. In a work recently acquired by Pérez Art Museum Miami, the artist created a belt as part of an imagined romance between the Statue of Liberty and the Columbus Monument in Barcelona. One side of the belt lists foods brought from European colonies to the Americas, and the other lists items taken back to Europe from the New World. Like real marriages, the fictional union of the two monuments is conflicted and problematic while simultaneously creating connection and comfort.

Wyatt Gallery, from the exhibition "Subtext."
courtesy of Yeelen Gallery
Wyatt Gallery has approached similarly fraught cultural exchanges in his work, although his show on view at Yeelen Gallery (294 NW 54th St., Miami; 954-235-4758; yeelenart.com) seems like a departure from it. Gallery is a Philadelphia native who was introduced to Miami through the Fountainhead Residency. He has completed photo series in countries throughout the Caribbean that range from awareness-raising documentary projects to more contemplative works exploring religious spaces. His solo exhibition "Subtext" grew organically from these initial impulses.

"After Hurricane Katrina, I was photographing in people’s homes that were destroyed by the floods," Gallery says. "I started photographing people’s walls instead of their entire space. The walls show the mold and the flood lines and the mud, but it also showed people’s personal possessions. I think those images started creating more intimate, artistic, spiritual views of this disaster that lead to a deeper feeling of empathy within the viewer."

Shortly after completing that project, Gallery's friend and collaborator Hank Willis Thomas directed him to some interesting walls at the 50th Street subway station in New York City. The advertisement alcoves had been temporarily stripped, revealing patches of color and texture.

"All of these abstract walls were made by numerous different employees over decades of time installing and tearing down advertising posters," Gallery explains, "and having no idea that at the same time they’re creating these beautiful abstract pieces of art."

The photographs can at first seem like monuments to blemishes, imperfection, or even destruction, but Gallery adds that "our history of overcoming challenges, dealing with hardships, our internal wears and tears, that’s our character." The photos are spaces for pause and meditation that he likens to mandalas. Their found and ephemeral nature seems to only heighten that quality.

"I don’t at all feel like I’m reinventing the wheel here," Wyatt says in reference to a long tradition of photographers focusing on walls. "For me, the difference in what I’m doing is that I’m not cropping in on the wall. I’m not using the camera to create something new. I’m giving you the entire mundane space and transforming this entire accidental space into something."

"I have an interesting relationship with the idea of the mundane," Polissaint muses. "I understand what it means, but I think that the idea of it being mundane is related to each person’s experience. Some people may think my house is boring or uninteresting because it has this energy of the mundane. I enjoy the idea of things being kind of monotonous."

Domestic spaces are often the subject of Polissaint's photographs, whether she's taking portraits of family and friends or still lifes of her bedroom. The supposed monotony creates not only a sense of intimacy with the subjects but also an attention to the details of the image — how different kinds of light change the color of a sheet or wall, for instance. For her, the art is "giving [the mundane] the life it deserves. Because of its everyday existence, it’s real, it’s honest, we’re breathing life into it." Her photographs will be on display at Florida Atlantic University's group show "SouthXeast: Contemporary Southeastern Art" (January 20 to March 3 at FAU's Ritter Art Gallery, 152 Breezeway, Boca Raton; 561-297-2660; fau.edu/artsandletters/galleries).

Aside from curating and organizing at Locust Projects and a collaboration with Miami creative collective the BLCK Family, Polissaint is working on a project in which she will take on the personalities and personas of black queer jazz singers through live performances. It's somewhat of a shift from her visual art, although the performances will be documented. The connection she finds between past and future work is mainly personal, though not without broader influences.

The impulse isn't limited to racial representation — Polissaint often emphasizes gentleness, care, and generosity in all aspects of her work, both curatorial and artistic. Even her depictions of semi trucks in Haiti feel soft and slow.

"I use an old Rolleiflex camera. It’s medium-format, and it's just a slower camera to use," she explains. "I think growing up here has given me a lot of moments to focus on things. Being a kid just staring at things made me a photographer. I was always riding in cars with my mother, so I got to pay attention to everything else. It might seem silly, but it actually really informed the way that I work and the way I produce my work."