Wynwood Sushi Spot Omakai Is a Step in the Right Direction 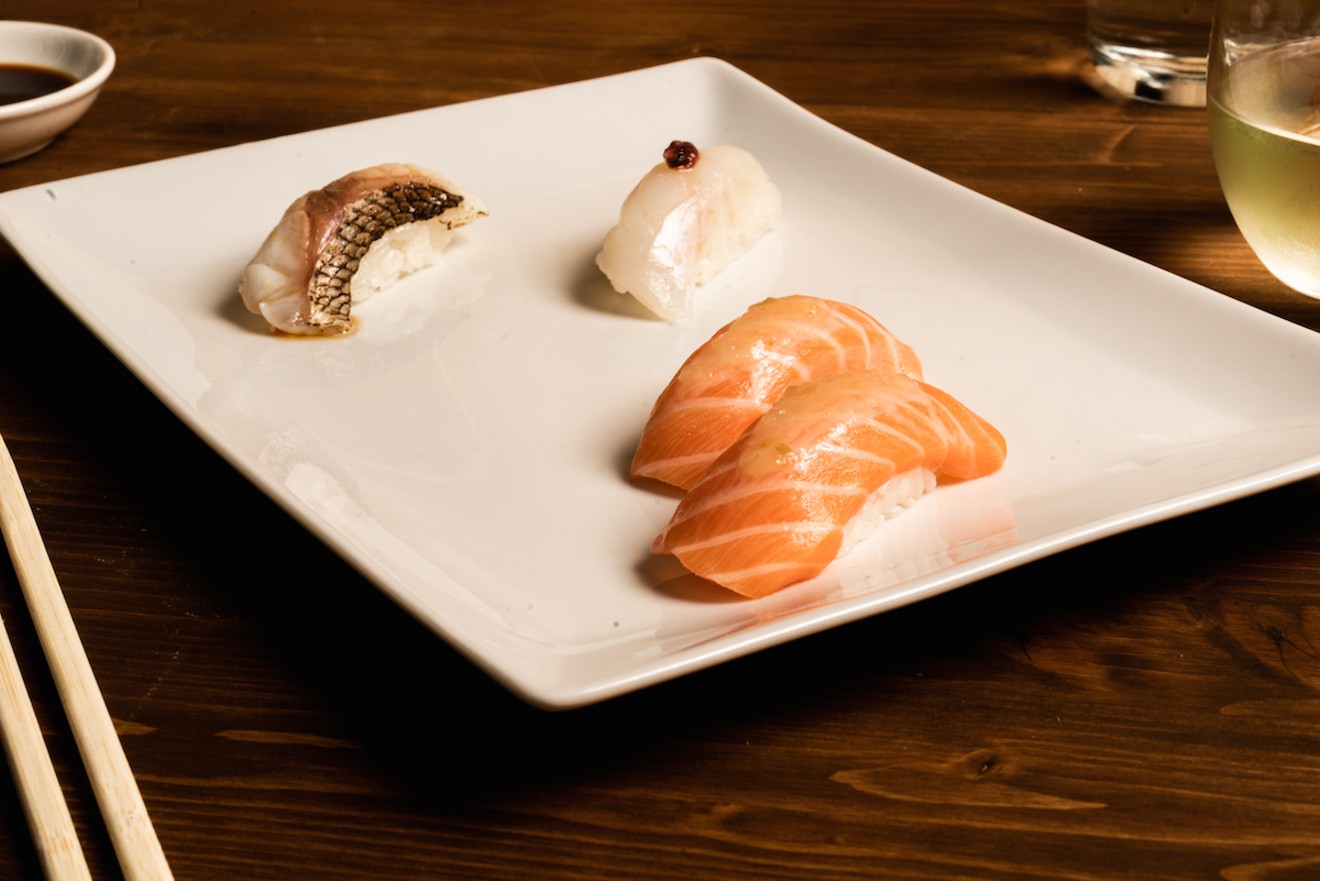 Omakai's affordable omakase offers plenty of familiar pieces plus a few less common bites. Photo courtesy of Omakai
Oftentimes high-end sushi — the shimmering bites passed to diners seated at a counter for a chef's choice, or omakase, progression — is perceived as overpriced, unapproachable, or simply bewildering. Despite its presence in the media and cities across the nation, such a meal — which traces to sushi's roots in late-19th-century Japan when it was aged or preserved in vinegar and sold from pushcarts — still escapes hordes of Miami faithful who avoid the real stuff in favor of local sushi chains that occupy many of the city's strip malls.

Miami over the years has become home to a number of a highly respected higher-end operations — such as Makoto, Azabu, Hiden, and Kevin Cory's long-standing Naoe — but the past 12 months have seen a flurry of activity in places offering something more gently priced without a wholesale abandonment of quality. Take, for example, Sushi by Bou inside Casa Casuarina; Shuji Hiyakawa's Wabi Sabi, where a two-person omakase tasting goes for at least $100; and Sushi Erika, where Erika Kushi will serve as much or as little as the guest likes and charge accordingly.

The newest option is Omakai, a sparsely decorated spot in Wynwood founded by three friends, including Nicolas Sayavedra, a former manager for the restaurant chain Moon Thai & Japanese, who says they were often dismayed by Miami's dearth of reasonably priced yet quality shari (rice) and neta (fish). The restaurant they've created is a sort of gateway drug for all the diners who've balked at $20 hand rolls and $14 pieces of nigiri. With the help of Aaron Pate, a sushi chef at the Seattle edomae restaurant Shiro's, the team offers a concise trio of tasting menus ranging from $24 to $48.

Who cares if Omakai is being whispered as a copy of Los Angeles' Sugarfish, whose reasonably priced progressions have spawned a soon-to-be nationwide restaurant operation with guests often waiting hours for a seat?

At Omakai, meals begin, as they do at Sugarfish, with a small plate of edamame. Some of the dishes at the table were hot; others were not. It's reasonable to pine for something else; however, to maintain comfortable pricing, edamame is an obvious choice. But, hey, if it's good enough for billionaire and downtown overlord Moishe Mana, who was sipping sake with a group of suits at the far end of the space, and Naoe's longtime manager Wendy Maharlika, who was also dining that night, shouldn't it be sufficient for the average guest?

Next came a sashimi special, usually a rotating whitefish offered in a simple sauce without rice. On a recent night, it was three thick slices of overlapping porgy with a slight chill and richness. A simple splash of soy sauce, ginger, and a few strands of green onions were an effective garnish. 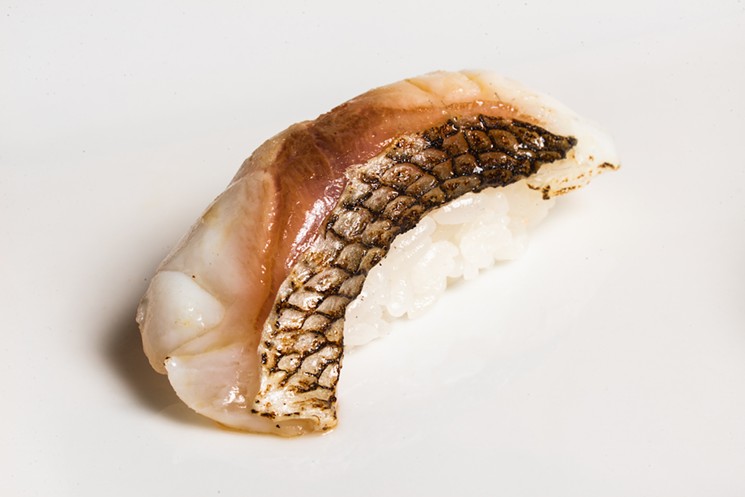 Photo courtesy of Omakai
Omakai's strength lies in its pacing. At too many places, diners are presented with a small mountain of rolls and begin stuffing themselves into uncomfortable distension. Though the $32 menu reads a bit paltry, the relaxed speed at which bites arrive gets the job done. First came a four-pack of nigiri, beginning with two fatty slabs of ponzu-slicked salmon alongside an unpleasantly oily piece of torched sea bass. There was also more of that porgy, this time with a brush of sweet soy sauce to foil the vinegared rice's snap. Each bite was well balanced, with each fish's richness complementing the rice's seasoning. The grains, however, were cooked a touch too long and were a bit stickier than those found at the most expensive spots.

Hamachi lashed with smoked soy sauce appeared on two plates, first with a piece of torched salmon belly with sweet soy sauce, and then, on the next plate, with a mineral-rich bite of the lean tuna called akami alongside a buttery cut of fatty tuna tempered with grated ginger and green onion.

As things wound down, a certain sadness accompanied the final hand roll of the night. But remaining glum is difficult when grabbing hold of the cylinder veneered by a crisp sheet of seaweed filled with sweet blue crab meat.

Omakai also offers a full à la carte menu listing plenty of classics, served in pairs, that don't appear on some of the omakase menus. Two pieces of auburn unagi ($8) offered a deep creaminess and sweetness, while the ikura ($12) boasted an oceanic smokiness that even in some of the best places can't be found behind the deluge of saltiness.

Though you came for bargain omakase, you'll likely find a few extras tacked onto your bill. As you head for the door, you'll wonder what other secrets await in Omakai's $72 progression. Next time, Gadget. Next time.

Omakai Sushi. 2107 NW Second Ave., Miami; 786-579-9995; omakaisushi.com.
KEEP MIAMI NEW TIMES FREE... Since we started Miami New Times, it has been defined as the free, independent voice of Miami, and we'd like to keep it that way. With local media under siege, it's more important than ever for us to rally support behind funding our local journalism. You can help by participating in our "I Support" program, allowing us to keep offering readers access to our incisive coverage of local news, food and culture with no paywalls.
Make a one-time donation today for as little as $1.