In a small kitchen tucked away off SW 75th Street in South Miami, three generations of Silva women sit close together around a pale-green vinyl countertop in their best color-coordinated red outfits and gold earrings. There's 87-year-old Petra, who is soft-spoken and even sweeter than the typical abuela; her daughter Carol, the spirited 59-year-old female head of the house; and the newly married Coral, who is 27 years old and speaks fluent Spanglish.

Nearby, a small ceramic Santa keeps vigil over two cans of Goya coconut cream and a bottle of Bacardi. Carol drops a cinnamon stick into a $6 glittery glass bottle from the Container Store filled with coquito, the famous Puerto Rican Christmas cocktail.

"Let me tell you," Carol laughs. "When I was a child, my mother made coquito for the entire family — and she is one of 13... I really like to continue the tradition, so I taught my daughter, and now the three generations make coquito together."

Coquito is the superior Puerto Rican cousin of eggnog. It's made with coconut cream, evaporated milk, condensed milk, vanilla, cinnamon, rum, and a toquecito, or special touch that each family adds. (Some people also add eggs, but this ingredient is controversial.) On the island and in boricua communities like Miami's, it's the centerpiece of the Puerto Rican holiday season — and this year is a special salve for the pain Hurricane Maria inflicted on the island.

"That's the beautiful part," Carol says. "Being in Miami, you share things about your culture's food. Coquito is an easy drink to make, but you [can] share it with everyone in your life." She's the kind of mother that surprises her 22-year-old son Alberto with a bottle of coquito emblazoned with his fraternity's crest.

Though coquito is traditionally meant to be shared as a gift, many Miamians sell it on Instagram, Facebook Marketplace, Craigslist, you name it. Not only restaurants and bars peddle it, but millennials also make bank with flavors such as Nutella, coffee, and even pumpkin spice, which sell for about $15 to $20 a bottle.

The season for coquito — the name literally means "small coconut" — begins just before Thanksgiving, slows during the first week of December, picks back up through Christmas, and lingers until Three Kings' Day and the San Sebastián Street Festival in January.

This year, she expects to sell more than 300 bottles.

Like the Silvas, Vanessa Heart is a home coquito maker. The 30-year-old marketing self-starter is Colombian and has become one of Miami's most prominent coquito makers and sellers. Her love for the drink traces back to her titi — aunt — Rose, who is Puerto Rican and not related by blood. "My mom [had] to leave Colombia for Puerto Rico and then met my Titi Rose," Vanessa says. "They were raised together."

Growing up, the two women were inseparable and made coquito every holiday season.

"My mom lost her mom during Christmas, so one thing they would enforce was that every Christmas, we would all have to be together, no matter what," Vanessa shares. "My titi was there through that time for my mom." 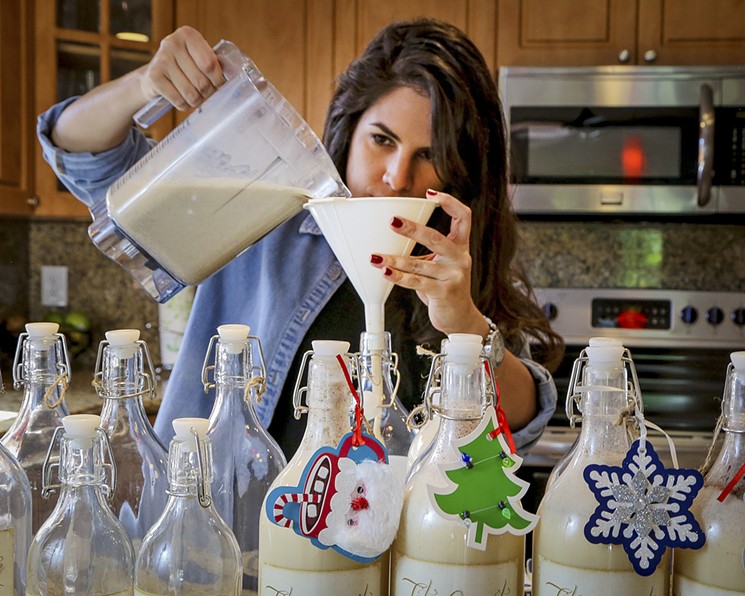 Titi Rose taught Vanessa and her six siblings to make the drink as gifts and later gave Vanessa permission to make a living off that legacy. She has turned those lessons into her Instagram business, Titi's Coquito. Wearing a Chicago Bulls tank top while hunched over a Vitamix blender in Coral Terrace, Vanessa is the real deal.

Having started only three years ago, when she sold almost 20 bottles for the season, Vanessa last year mixed, bottled, and taste-tested more than 200 on her granite kitchen countertop. This year, she expects to sell more than 300 bottles at $25 per liter for traditional coquito and $30 for her Nutella blend.

Three years ago, Vanessa would stay up until 3 in the morning to pick up bottles from Blue Martini or Finka Table & Tap in Kendall. Now she buys them in bulk from IKEA, designs her own custom labels, and is working on back labels with nutrition information and Titi's story.

Though there's plenty of sugar in coquito, it shouldn't be overbearingly sweet, Vanessa explains. And despite the addition of rum, the drink shouldn't taste like alcohol.

This year, she has introduced half-liter sizes, which are available for $12 to $15. Vanessa sees her brand as a way to honor and thank Titi Rose for the closeness she fostered in their family. Next year, Vanessa will move to Orlando, where Rose lives, to open a food truck. But she plans to return home annually for coquito season.

"We'll be coming back and forth from Orlando to Miami due to the love I have for Miami that I'm clearly never going to be able to let go of," she laughs.

James Perez, a recent University of Miami economics and marketing graduate and Puerto Rican 305 native, has been making coquito with his family as gifts for as long as he can remember. "It's always sort of just been a family thing," he says. "We'd always make [coquito] for family parties during the holidays and give bottles away as gifts."

But after informally selling 30 bottles last year, Perez says he and his family "decided that we'd up the ante this year and make our operation a bit more legit." James and his mom Cuqui created their own labels under the name Koh-kee-toh, sourced bottles with tamper-proof caps, and introduced guava-flavored and vegan-blend coquitos ($25 each).

Especially this year, Perez feels he has a duty to give back to Puerto Rico. "We donate a percentage of our sales to Boxes of Love, a grassroots organization in Puerto Rico that is helping give assistance to those that have been most in need after Hurricane Maria hit the island earlier this year."

Jean Wurst, a business manager in Kendall, is giving back too. She runs Jeannie's Sweets & Treats on the side and is donating all proceeds from coquito and flan sales to the Hurricane Maria: Emergency Relief Fund set up by Americares, a charity that specializes in emergency medical response to global disasters. Wurst, born and raised in Miami-Dade, began making her Puerto Rican mother-in-law's coquito recipe nearly 20 years ago. Today she sells it for $10 to $20 in bottles that her three school-aged daughters help fill and decorate.

For her part, Carol hopes coquito will continue to bring people together as it did in the old days. "There were people with economic power, but there were many others who didn't have means," she says. "It is a drink that everyone could afford, and that was very special."

Her mother Petra left Toalta, Puerto Rico, and moved in with Carol 12 years ago when Petra's husband Alberto, a mailman, passed away. Petra remembers her youth in Corozal, a town in the center of the island bordered by mountains of the Cordillera Central. She spent the holidays helping make coquito from her grandmother and great-grandmother's recipe.

Asked at what age she remembers learning the process, Petra says simply, "De siempre." From always.

Irma Cruz, Carol's mother-in-law, has been living with the Silvas for a month. The lack of electricity and the air pollution from generators in her hometown of Trujillo Alto outside San Juan made living alone and managing her respiratory health difficult after the hurricane.

"I didn't have anything," she says. "I couldn't get ice or food, and it was hard to go outside."

Irma recalls the coquito of "los tiempos de bien atrás" — of times long past — with pure, home-fermented sugarcane rum and coconut cream squeezed from coconut shreds from palm trees in the backyard. It was often accompanied by a slice of tembleque, a coconut dessert. Folks back then also got crafty, with pistachio and chocolate flavors. She also remembers the smell of pitorro, Puerto Rican moonshine, brewed in alambiques.

"There is still no light in Trujillo Alto," Irma says. But for the time being, she has found some light in celebrating old times with coquito and family.