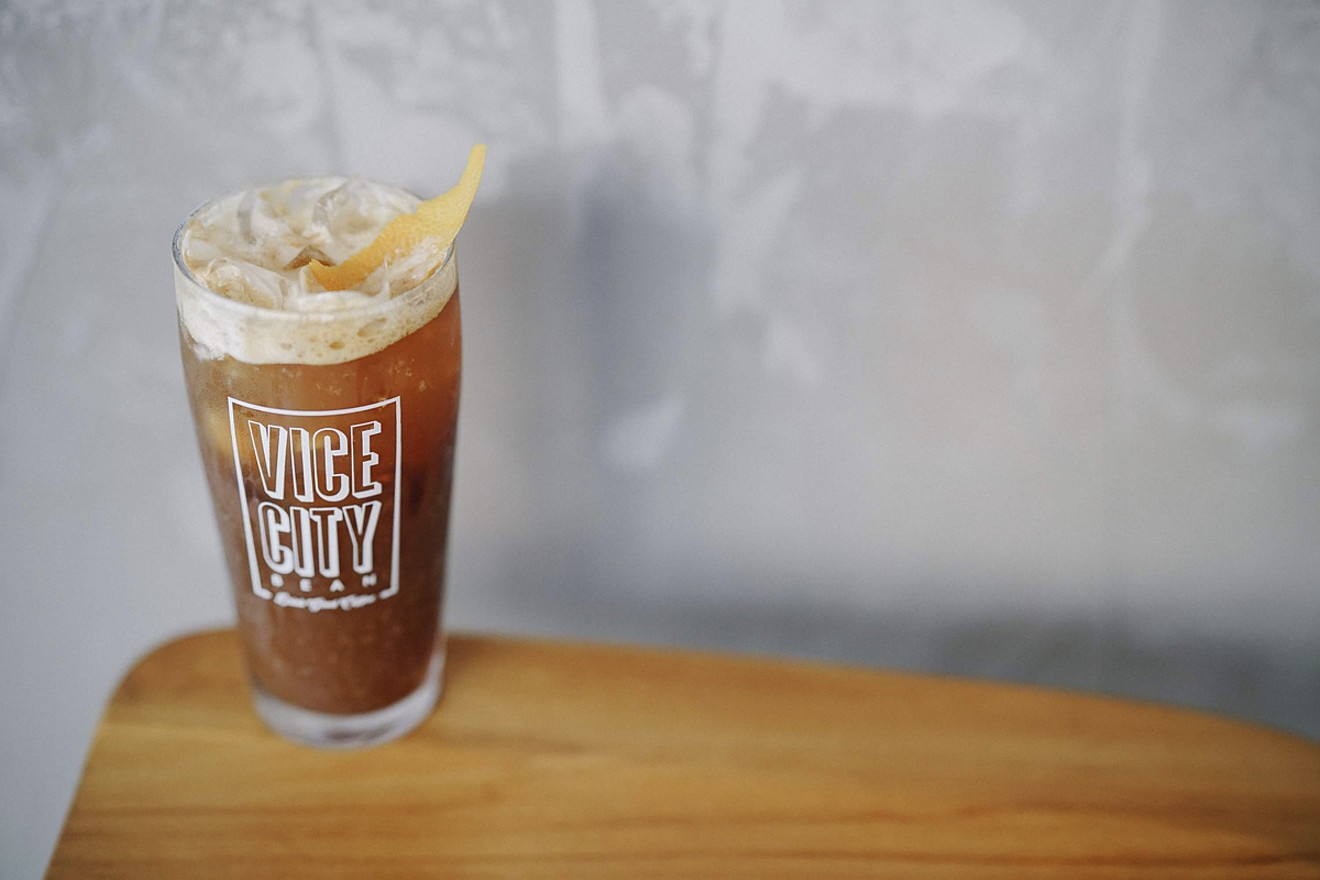 At first, Jeremy Sapienza's café con leche especial seems like any other Cuban eye-opener. But something is different. A dash of espresso is whipped in a gleaming pitcher with not only sugar but also a pinch of salt and a lump of cultured vegan butter. Then it's thinned with a pull of Stumptown's Hair Bender espresso and steamed milk. The result is akin to ayahuasca.

Sapienza first served the drink in his now-shuttered Brooklyn , La Mejor. The butter creates a rich body the same way clarified chicken or pork fat does in a bowl of soup from the best ramen shops. The salt intensifies the espresso's fleeting cherry, toffee, and fudge flavors.

"This is something I'd seen in Cuban homes while growing up in South Florida but never in a traditional Cuban coffee shop," says Sapienza, whose pale-pink, 1960s Florida-style coffeehouse, Galleria (69 SE First St., Miami; galleriadowntown.com), opened in August.

Coffee is credited by some with igniting the European Enlightenment. It's worshipped by others. But lately, several Miami spots are rightfully treating its vast spectrum of flavors with both the innovation and experimentation it deserves.

The challenge to create the perfect beverage is like Medusa with a headful of snakes.

In each case, the challenge to create the perfect beverage is like Medusa with a headful of snakes ready to attack. First, the flavor profile of the coffee must be taken into account. Although many palates are accustomed to sugary, milky, burnt-tasting diner coffee, the beans from individual farms in Ethiopia, Kenya, or Indonesia can be as varied as grapes from Burgundy, Mendoza, or Sonoma.

Next, the baristas must decide which ingredients highlight a chosen bean's flavors without masking or obscuring them.

Finally, the beverage needs to be balanced in a way that can be re-created over and over with little variation.

"The idea is always to create something that's different and delicious," Rodriguez of Sabal Coffee says.

His Espresso Egg Cream is a study in balance. It begins with a double shot of Counter Culture Coffee's espresso sweetened with chocolate and simple syrups, then creamed with milk. The rich concoction is tempered with a of seltzer, which offers fizziness and mineral undertones that help tone down what would otherwise be liquid candy. 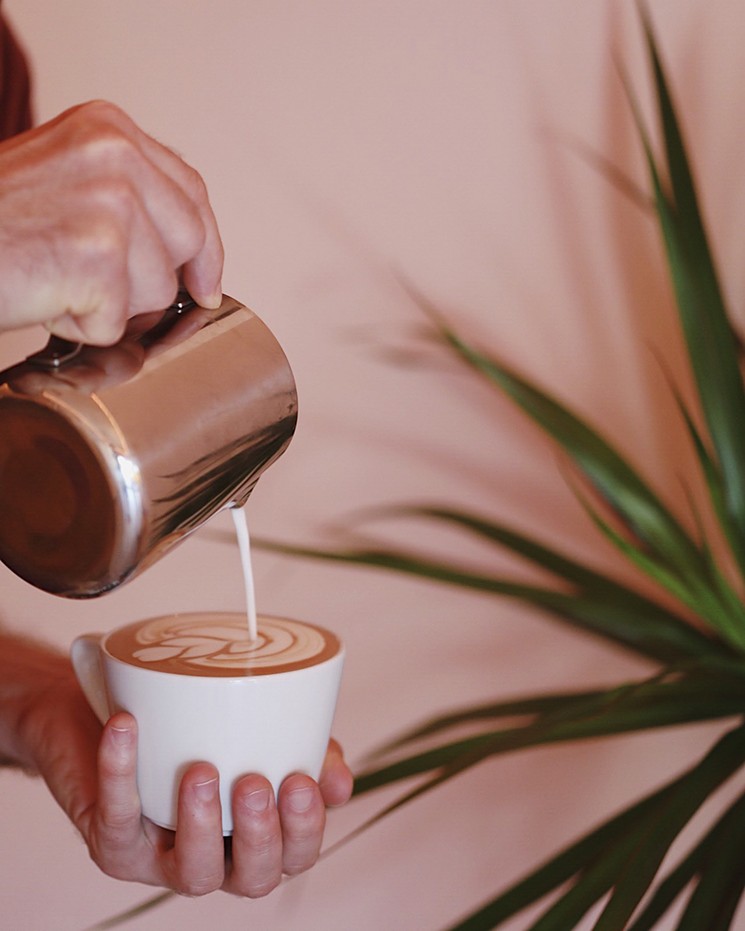 "This is about as wild as I'll get," Rodriguez says. "I want the coffee to speak for itself, and we take a lot of care to ensure that it does."

At All Day, which opened in 2016, seasonal drink creations sometimes riff on an existing concept, such as bananas Foster. Signature drinks have become one of the shop's most expressive features. If you're lucky, you might pop in one day and overhear beverage manager Valeria Vizoso conceptualizing the next season's drink.

"It's all about bouncing ideas off each other," Vizoso says. "There's really no consistent process, but I might have an idea or a concept I'm thinking about, Camila might expand on it, and if it works, we might work together to perfect it."

Few ideas make it that far. Vizoso, who is one of the shop's original employees, has toyed with everything from banana syrup and egg whites to a version of a coffee cream soda that was ultimately shelved. Others, such as the (pronounced "wine"), were stunners. Here, she and Ramos started with the hibiscus flowers called roselles that local farmer Chris French harvested for a short time late last year. They brewed the puckering, deep-purple buds into a tea, then blended it with cold-brew coffee aged in white oak along with salted cacao bitters. The result was a creation with the punch and slight tannins of coffee and tea, and a rounded loamy sweetness complemented by sugar and salt.

Searching for a formula to make these drinks has resulted in some interesting lessons.

"It's surprising, but there always seems to be some kind of acidic or juicy element in the drinks that pairs really well with the coffee," Vizoso says. "We're always looking for a balance — a little bit of acidity, a little bit of sweetness, and always something that's out of the box.

The secret is understanding which variety of coffee to use and which brewing method pairs best with such an esoteric rainbow of ingredients. Espresso, for example, is an intensely flavored iteration with an oiliness that's difficult to blend with certain ingredients. Meanwhile, more aggressively flavored coffees are best used when ingredients such as pink peppercorn, which is included in All Day's grapefruit-and-cold-brew Paloma, are introduced into the mix.

All of this creativity surrounding coffee is perhaps a reflection of its long history and importance in cultures around the world. In Senegal, for instance, coffee is infused with pepper and cloves. In Finland, it's poured over cheese curds. Italians take their espresso with citrus peel, and in Ethiopia, where coffee is believed to have originated, it's taken with salt, sugar, and an elaborate ceremony.

At its best, coffee is a platform for gathering. Sapienza, of Galleria, considered that aspect when he began serving that salt-and-vegan-butter coffee in his Brooklyn shop. "People wanted something intriguing, something special," he says. "Before we knew it, we had people coming in to try it, and it became this whole meeting point for people from Florida living in New York."