Leku's outdoor patio Photo by Brigitte Schambon
It's safe to say that when the clock struck midnight on December 31, 2019, most of us did not have "global pandemic" on our 2020 bingo card.

Though restaurants were ordered closed for months, many Miami chefs persevered. Some restaurateurs opened new establishments shortly before the pandemic hit, while other determined entrepreneurial spirits opened amid the COVID-19 crisis.

Here, listed in alphabetical order, are the ten best restaurants to open in 2020. 2801A Florida Ave., Coconut Grove
305-204-2372
2koreangirls.com
Sisters Jennifer and Michele Kaminski channeled years of watching their mother, Chom “Sunny” Kaminski cook at her Indiana restaurant. Seeing a need for delicious Korean food in Miami, they opened 2 Korean Girls with a little help from culinary veteran Allen Susser. The virtual takeout-and-delivery-only concept revolves around bibimbap, the Korean bowl filled with rice, meats, and vegetables (and customarily topped with a fried egg — or a raw one if you're hardcore). The sisters turn the staple dish on its side with renditions like the "Fish Better Have My Money," made with cod and festooned with edible gold flakes ($17); and the "Impos-Seoul-Ible," made with plant-based bulgogi meatballs ($16). The meals come in adorable K-pop boxes and are pleasing to the eyes (check out the heart-shaped fried eggs!). But the real enjoyment comes in mixing all the ingredients together and eating these flavorful, soulful bowls of goodness. 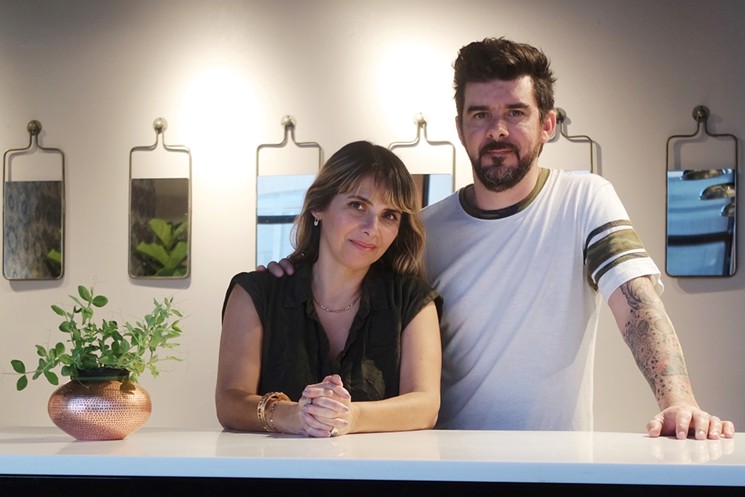 7535 N. Kendall Dr., Unit #2380 (in Dadeland Mall), Miami
786-542-5661
barbarella.dadeland.business.site
Sebastian Fernandez and Leslie Ames, the husband-and-wife duo best known in Miami for their much-missed Coconut Grove establishment 33 Kitchen, leased a small bistro space in Dadeland Mall back in January and set to work on a new Mediterranean restaurant. They were set to open in mid-March, before COVID laid waste to their schedule. When May came around and the mall reopened, they opened their outdoor terrace. Menu items include pan con tomate topped with white anchovies ($9), roasted beets prepared with Greek yogurt, za'atar, glazed pecans, and mint ($14), and a spicy pancetta pizza topped with mozzarella, calabrese peppers, pomodoro sauce, and honey ($14). 7700 Biscayne Blvd., Miami
305-985-4764
kushhospitality.com
Matt Kuscher is known for opening affordable restaurants that offer simple food and drink made with high-quality ingredients. Using that same approach, Kuscher recently opened his first bistro, one that's perhaps best described as a meet-cute between Paris and Miami. Kuscher has transformed the sorely missed Red Light in Little River into a spot filled with little treasures. (Look for a French "Where's Waldo" and a nod to the neighboring Gold Rush Cabaret.) Though there are a few cozy booths here, opt for a seat downstairs on the large, sheltered patio, where you can keep an eye out for manatees in the daytime. Order a house-made vermouth on the rocks ($10) and peruse the menu: a mélange of bistro staples like French onion soup ($8) and ratatouille ($14), alongside Kush favorites like burgers ($15) and a grilled-cheese and tomato-soup pairing ($12). Don't miss the coq au vin ($16) — a Paris-Miami mashup in which the classic dish is braised with Wynwood Brewing's Pop's Porter in lieu of wine and served on a bed of cauliflower mash instead of noodles. Like just about all things Kush, It's unconventional, yet delightful. 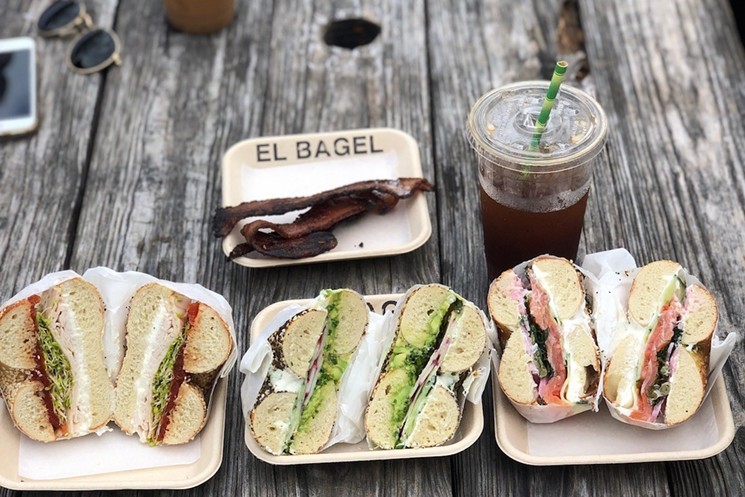 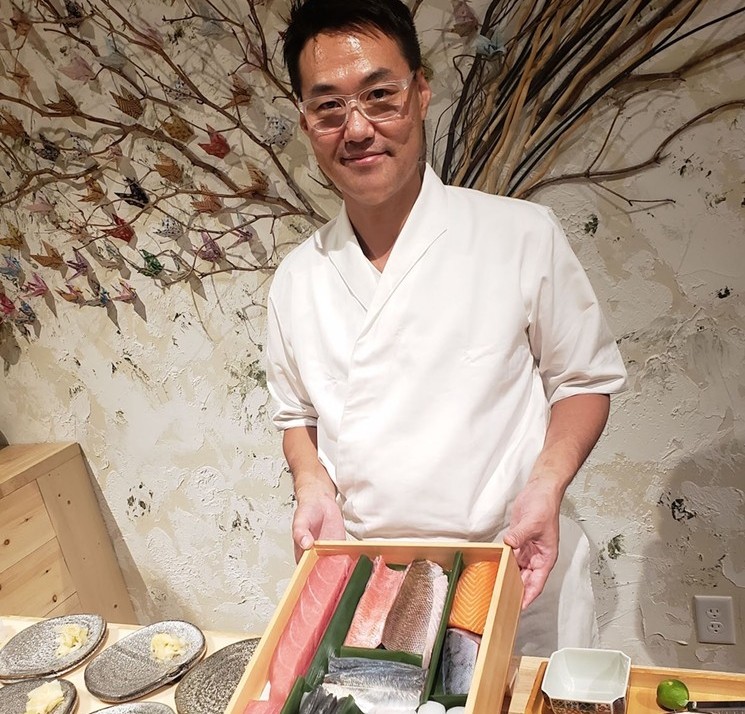 2700 N. Miami Ave., Miami
305-890-7228
hiyakawa.com
Chef Shuji Hiyakawa's Wabi Sabi by Shuji is a favorite among Miamians who know about well-made sushi. The chef has now opened a chic Wynwood restaurant with restaurateur and art dealer Alvaro Perez Miranda, along with executive sushi chef Masayuki Komatsu, formerly of Blue Ribbon Sushi Bar & Grill. The restaurant serves up sushi, along with an expanded menu that includes agemono (deep-fried dishes), yakimono (grilled or pan-fried dishes), shirumono (soups), and zensai (appetizers). The jewel of the restaurant is the omakase ($175), which includes three appetizers, a dozen pieces of nigiri, one maki, miso soup, and a dessert of the chef's choosing. Leku at the Rubell Museum

1100 NW 23rd St., Miami
lekumiami.com
Thirty-year-old Mikel Goikolea helms the kitchen at the gorgeous new restaurant on the ground floor of the Rubell Museum in Allapattah. Since opening in early July, Leku, which opens onto a courtyard garden, has offered a menu of items such as beet tartare topped with olive-oil caviar ($11), traditional octopus served Galician-style ($18), and Cinco Jotas Iberico ham croquetas ($15). 920 NW Second Ave., Miami
305-640-9880
redroosterovertown.com
Ethiopian-Swedish chef Marcus Samuelsson has finally opened Red Rooster Overtown after months of COVID-induced delays. This is the third Red Rooster (the original is in Harlem, a second is located in London), and it promises to shine a light on Overtown's historical and cultural importance as the formative center of Black arts and music in Miami. As such, Red Rooster will act as a venue for local musicians to showcase their talents while diners enjoy dishes such as "Hot Honey Yardbird" (Samuelsson’s famed fried chicken) and "Obama’s Short Ribs" (a dish served to the former president at the original Red Rooster). 9610 Old Cutler Rd., Coral Gables
305-668-8788
redfishmiami.com
Red Fish Grill in Matheson Hammock Park was known far and wide as a gorgeous location for date nights, anniversaries, and birthdays. The waterfront restaurant sustained extensive damage to its coral structure during Hurricane Irma in 2017 and remained shuttered until recently. Chef Adrianne Calvo is at the helm of the resurrected Redfish, offering creative dishes such as a Beaujolais-poached pear salad made with arugula, goat cheese, crisped prosciutto, and pistachios ($16); and ahi tuna sashimi with crisped shaved Brussels sprouts and pear, topped with ponzu aioli, soy, and truffle ($17). Other dishes include cobia ceviche ($18) and herb-stuffed branzino flavored with lemon and garlic ($40). Don't wait until your anniversary to check out this stunner of a restaurant.

115 NW Sixth St., Fort Lauderdale
954-329-2551
sistrunkmarketplace.com
Miami has its share of food halls, but you have to travel to Fort Lauderdale to find one that houses its own brewery and distillery. Sistrunk Marketplace is a massive 24,000-square-foot space filled with anything you could want to eat or drink under one roof, including coffee by Bronte Café and food by Empanada Bodega, Chop Shoppe Meat Provisions, Needa' Pita, HotLime Craft Tacos and Ceviche, Heavenly Raw vegan, Fuoco Roman Pizza, Nellie, and Country Kitchen. Wash down your food with a beer from in-house Khoffner Brewery or a cocktail made with vodka distilled on-site by Shady Distillery.

3450 Buena Vista Ave., Miami
societybbqmiami.com
At Society BBQ, chef Richard Hales departs from his Asian-inspired cuisines and taps into his barbecue cravings. This restaurant, located at the Citadel food hall, offers brisket burnt ends ($15), pulled chicken ($9), and ribs. The lovingly smoked meats are available as platters or in sandwiches. (Hales even offers vegan burnt ends for non-carnivores.) In the event your aunt in Topeka would prefer brisket to flowers on her birthday, bear in mind that Society BBQ will ship its meats nationwide.
KEEP MIAMI NEW TIMES FREE... Since we started Miami New Times, it has been defined as the free, independent voice of Miami, and we'd like to keep it that way. With local media under siege, it's more important than ever for us to rally support behind funding our local journalism. You can help by participating in our "I Support" program, allowing us to keep offering readers access to our incisive coverage of local news, food and culture with no paywalls.
Make a one-time donation today for as little as $1.