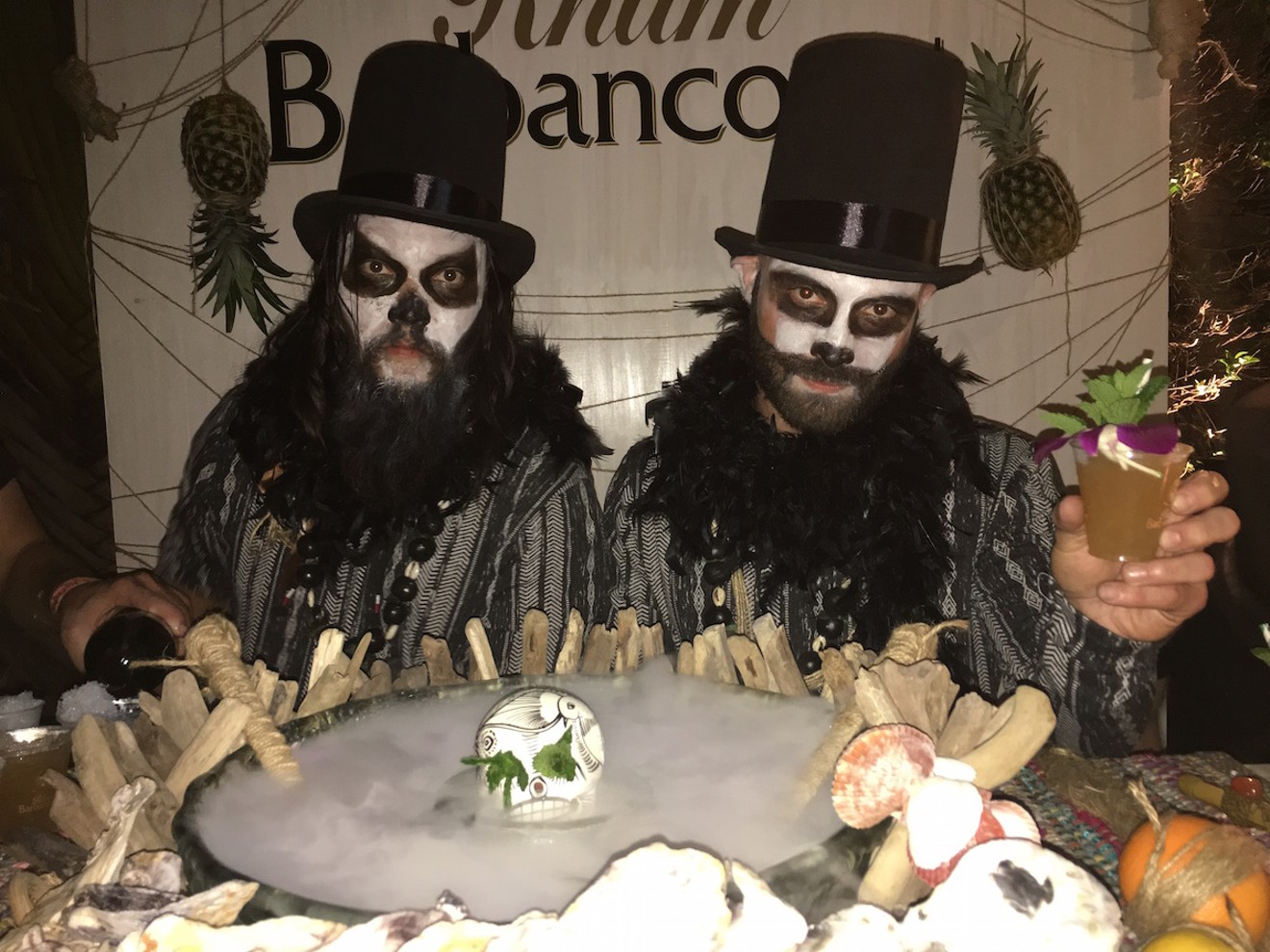 Beaker & Gray zombies served zombies made with dark and white rum, sherry, ginger creole falernum, passionfruit, orange juice, and Angostura bitters. Photo by Laine Doss
If cocktails are a religion, tiki is some hybrid of Santería and gold-wrapped, incense-burning Catholicism. While classic cocktails like the daiquiri — a humble shake of lime juice, dark rum, and simple syrup — rely on only a handful of ingredients to balance out the alcohol's burn, in tiki, no less than a half-dozen powerfully flavored ingredients, ranging from spice-infused syrups to tropical fruit juices, cloak enough rum to pickle someone's liver three times over.

The rum of the night (sponsored, of course, as were the tickets the festival provided to New Times) was Haiti's Rhum Barbancourt, and bartenders from across Miami and the nation were on hand for the South Beach Wine & Food Festival's Art of Tiki, held at the Kimpton Surfcomber Hotel to pour both the white and dark varieties with abandon.

Photo by Laine Doss
The judges' pick of the night was Jane Danger, a former CBGB and Death & Co. barkeep who is now head bartender at New York City' Mother of Pearl and Cienfuegos. Danger, sporting a mermaid outfit that included a shiny aqua wig, along with her co-conspirators, took the judges' prize with their "Beet on the Brat" — a blend of dark rum with absinthe, green apple juice, cinnamon-and-passionfruit syrup, and beet root powder.

The Regent's Tangata Manu
Photo by Laine Doss
Wywnwood's Beaker & Gray took home the people's choice award, thanks in no small part to the fact that bartender Ben Potts and his staff dressed up as top-hatted zombies handing out drinks and shots fuming with dry ice.

The majority of Miami's bar scene was represented, including Sweet Liberty, the Regent Cocktail Club, and the Broken Shaker.

Odd Bird's drink — Spirit Consumption — with scorpions.
Photo by Zachary Fagenson
Terrified yet unable to resist, I ate half of one, but only the tail end because the face and pincers were too horrifying. The taste? Think dried-out soft-shell crab. Just keep chewing and swallowing, don't think about what you're eating, and don't fall in the pool.