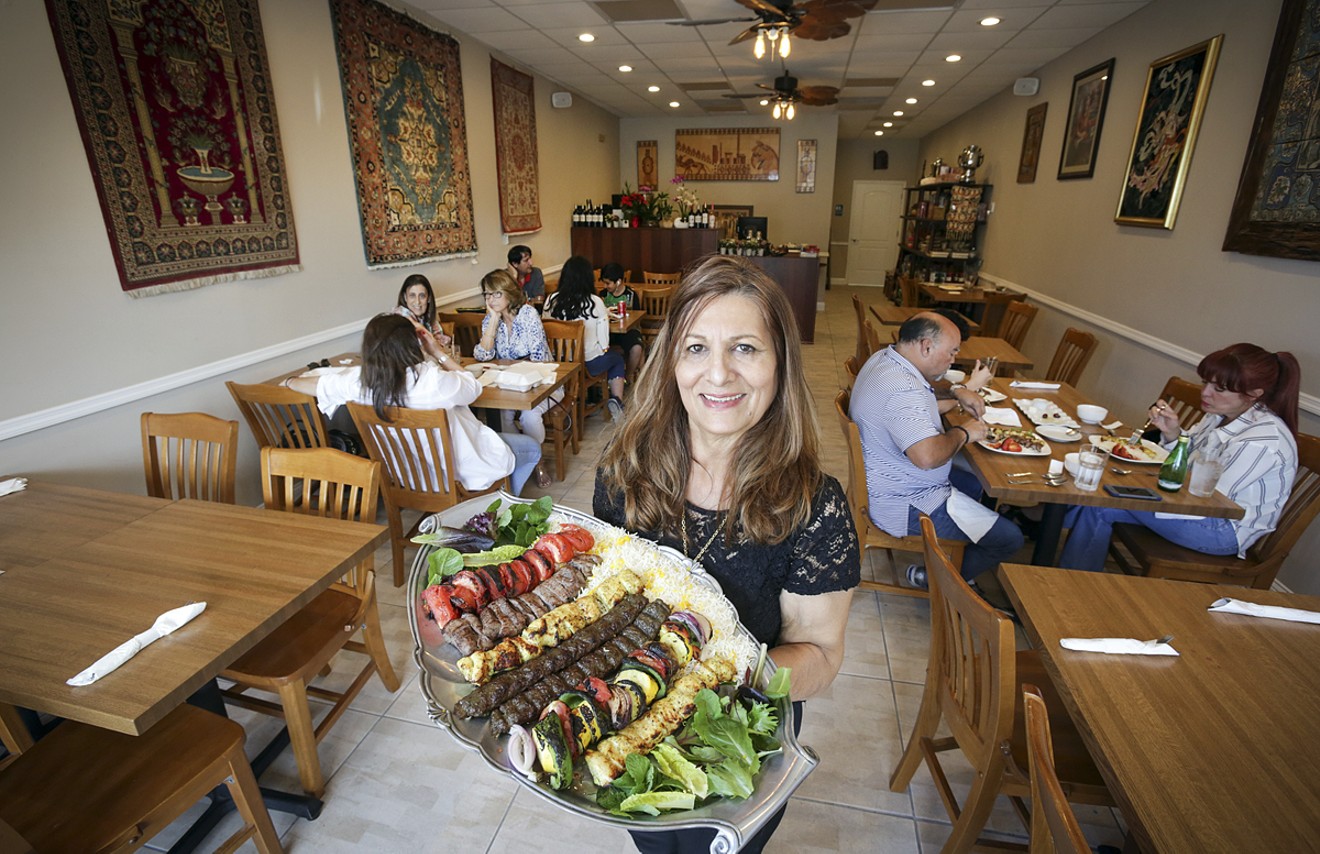 Homa Khakpour will never forget the aroma of rice perfuming her neighborhood in Shiraz, in southwestern Iran, each day on her way home from school.

Rice, especially the long-grain, slightly sweet basmati variety that boasts the scent of fresh popcorn, is a foundation of much of Persian cuisine. The ingredient is also ubiquitous in the homestyle Iranian favorites the Khakpour family serves inside this narrow 48-seater adorned with intricate, earth-toned Persian rugs and mosaics.

Rice was the first thing Khakpour's great-aunt and family matriarch, Zandaee, taught her to prepare. "You have to soak the rice, cook it, strain it, steam it, then put it back in the pot with oil or butter," Khakpour explains. The grains need to be monitored at each step. Any overcooking will either dry the rice too much or turn it to mush — the antithesis of the pearly, aromatic kernels that the process should yield.

Intoxicating aromas curl through Rumi. The menu includes an array of dips, kebabs, and a handful of slow-cooked stews that are the hallmark of Persian home cooking and have only recently found a place in Miami's culinary landscape.

The menu includes a handful of stews that are the hallmark of Persian home cooking.

Khakpour was one of ten siblings raised in a family obsessed with food. Her father, a well-to-do real-estate developer, had a small troupe of help, including cooks, for the family alongside a constant rotation of chefs who catered large gatherings.

"I was always in the kitchen watching the adults, trying to learn everything I could," she says. 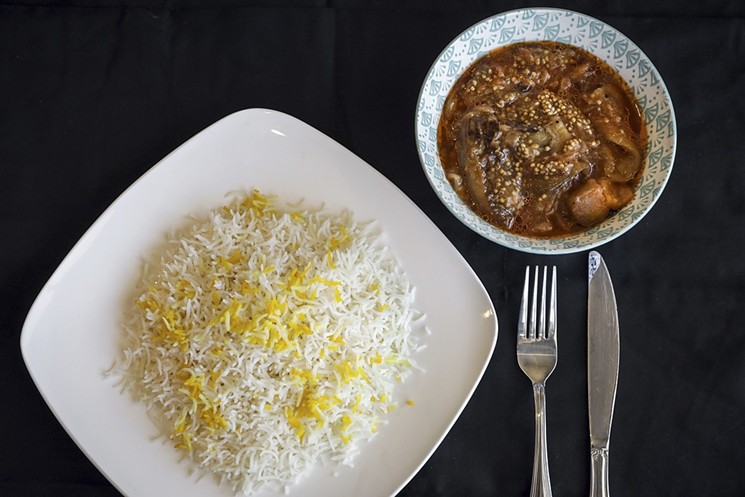 After finishing school, she went to work for a government utility company that took her abroad and to Iran's capital city, Tehran. But change was afoot. And in 1978, a year before religious revolutionaries toppled the U.S.-backed regime of Shah Mohammad Reza Pahlavi, she and her husband-to-be, Ali, traveled to Houston and then, after a few months, to Miami to pursue a better education. The following year, the family money that supported them stopped flowing. When she tried to return to Iran, she found the company she worked for vastly diminished.

"They said, 'You were wealthy enough to go to America — you don't need this job,'" she recalls. "So I came back to America."

She and Ali married in 1979 and together ran a handful of convenience stories as well as the Kendall restaurant Shiraz Kabab Cafe, which specialized in its namesake dish. But at Rumi, Khakpour delves more deeply, perhaps as a way to cope with what has happened in her homeland, which she says is only a shadow of what it once was.

The first glimpse comes at the beginning of the menu, where alongside the ethereal, house-made hummus ($8) is the oatmeal-hued dip called kashk bademjan ($9). Here, the kitchen peels eggplants, roasts them, and whips them into a rich paste with garlic and ground walnuts. Chunkier nuts, along with a fragrant, sticky jam of slow-cooked garlic and onions, are applied to the finished product. Finally, a dollop of strained yogurt called labneh is applied to lend a dash of piquancy to the richness.

Such contrasts in texture are a cornerstone of Persian home cooking. Another example is the ghormeh sabzi ($15). Hunks of lamb loin are seared in a wide pot. Then come leeks, heaps of parsley and fenugreek, and a bit of cilantro. The lamb is returned to the pot along with kidney beans and allowed to cook for a short time before dried limes, perhaps the most important ingredient, are stirred into the stew so their sourness can seep into every bite. The result is dramatic. The sweet, grassy greens pair well with the lamb's slight gaminess. The lime seasons it all, bringing out the greens' intensity while tempering the richness of the lamb and beans. Don't forget to order it with the crisped rice called tadig. 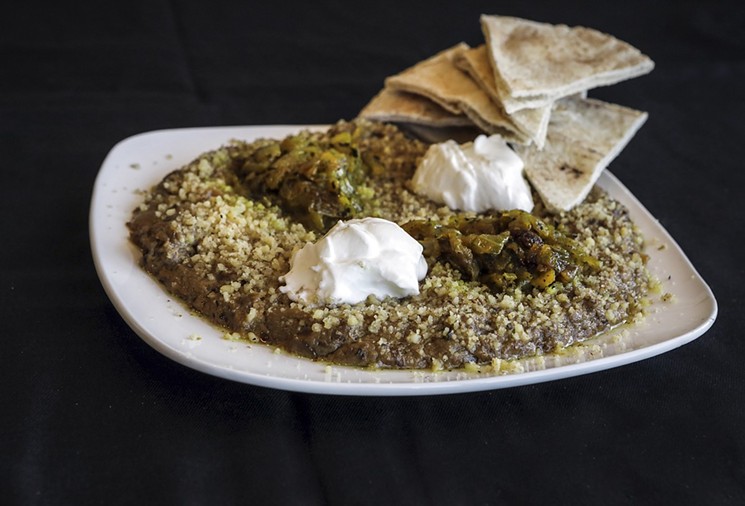 A tomato broth is the key ingredient in bamyeh ($15), a stew laden with lamb as well okra pods, which are cooked until tender and devoid of any sliminess. Here, the sedgy pods act as a thickener for the tangy tomato broth that balances the lamb.

Khakpour prepares the classic chicken stew called fesenjan ($15) as an occasional special. Miami was introduced to this dish at Fooq's in downtown, where the Persian speciality joined Mediterranean comforts. Now it can be found in South Miami-Dade. Khakpour starts with whole chickens and purges them of any skin or fat. Then they're broken down and shallow-fried with tomato and onions. Once they're properly browned, a slow braise with ground walnuts and jewel-like pomegranate seeds creates a rich, slightly sweet sauce with just a hint of tang.

That tang even touches dessert. A case in point is the ultrasugary puck of frosty goodness called falodeh ($5). It's a simple blend of rice-starch noodles frozen into a refreshing combination of rosewater and simple syrup. With a squeeze of lime and a slick of a sour-orange jam, this dish is the ideal way to round out a meal.

For those not interested in diving deeply into Persian cuisine, the restaurant offers the requisite lineup of kebabs, and though they are among the tenderest in town, the more exotic dishes, such as ghormeh sabzi and bamyeh, deserve your attention. They're a way for Khakpour to hold onto memories of home and for the rest of Miami to experience a familiar cuisine with new eyes — and taste buds.