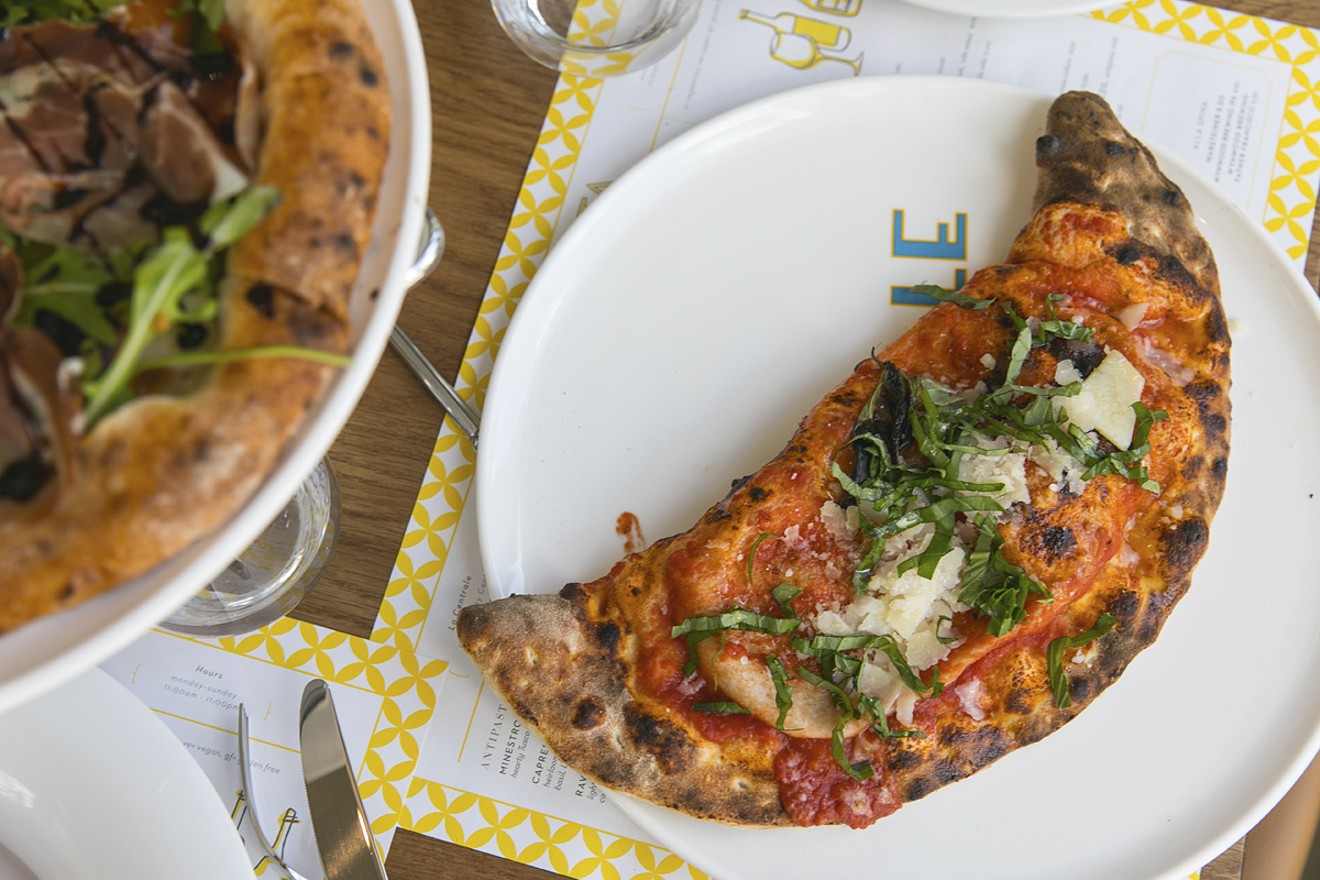 Pizza is one of the best, most reasonable dishes at La Centrale. Photo courtesy of La Centrale

La Centrale, the 6-month-old, 40,000-square-foot food hall in Brickell City Centre, might be the area's most massive experiment in eating. Started by a group of New York investors and first planned for Bloomingdale's flagship in New York City, it offers three stories filled with hundreds of types of Italian fare.

Indeed, just the numbers are enough to make you dizzy. There are seven food stalls, five sit-down restaurants, three bars, one gelato shop, a wine cellar (which, oddly, is on the top floor), and a cooking studio. The complex cost a mind-boggling $30 million to build. Prices vary widely too. From a fair-to-middling $13 pizza in the downstairs mall-like setting to an astounding $95 platter of lobster, crab, and a minuscule serving of caviar at a luxurious sit-down spot on top, this Italian-themed behemoth is like nowhere else in South Florida.

It remains to be seen whether customers will fork out for tabs that soar as you climb the stairs.

The brainchild of Jacopo Giustiniani, a slender 37-year-old Florentine restaurateur, and co-managing partner Matthias Kiehm, La Centrale (601 S. Miami Ave., Miami; lacentralemiami.com) was in the works for nearly four years before it launched this past February. When the two settled on Miami, Giustiniani relocated from New York with his wife and children to get a better read of the city's culinary temperature. The plan, he says, is to expand to other cities just as Oscar Farinetti's Eataly, an Italian food hall started in Turin, has grown to more than 40 locations around the world in the past decade.

How to navigate this epicurean extravaganza? Ask Giustiniani.

Begin on the first floor, the most economical but also least interesting part of La Centrale.

Find picture-perfect cannolis topped with shaved pistachio side-by-side with focaccia doused in cheese and salumi. Wooden crates filled with freshly made  such as fettuccine, cavatelli, and butternut squash ravioli sit alongside plastic tubs of Pomodoro and Bolognese sauces to take home. Though the market offers enough variety to enjoy a full meal, indoor seating is hard to come by. 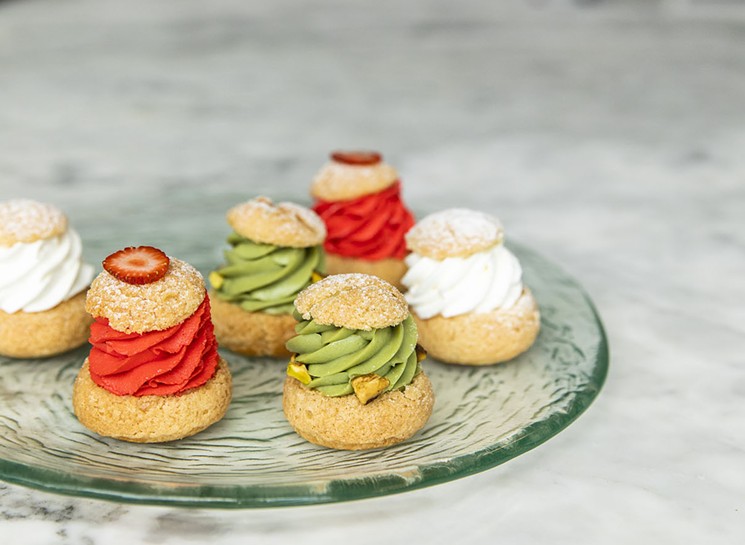 So you might want to head for one of two sit-down eateries on the first floor. There's Caffè, an all-day bistro limited to brunch items such as a meaty Benedict or a Nutella-filled Italian doughnut.

Or check out Pizza e Pasta, which boasts a menu of flat and thick fettuccine noodles submerged in Bolognese sauce. The eatery also offers tube-shaped rigatoni with mascarpone cream and vegetable ragù ($17 to $18). Pasta pairs nicely with pizzas such as the Tricolore, layered with prosciutto di Parma, wild arugula, balsamic vinegar, and cherry tomatoes on a decadent ricotta-stuffed crust ($17). It's the most casual and affordable restaurant here, a solid choice for families or large dinner parties.

Travel to the second floor if you're willing to pay a little more. A center bar called Aperitivo slings cocktails such as a straightforward Negroni or a fizzy Aperol spritz ($10). Order a tagliere board, which brings a selection of imported Italian cheeses, salumi, pickles, and olives ($22).

Stagionale is the most innovative. The restaurant, outfitted with hanging plants and emerald-colored furnishings, is entirely meat-free. On the menu, the jackfruit tacos ($9) stand out. The fruit is seeded and shredded to resemble ropa vieja and marinated in a house-made Italian barbecue sauce for eight hours. It's then sautéed on high heat with a generous of avocado oil until charred. Finally, it's placed in a yellow corn tortilla with a cashew crema. The result is smoky, spicy, and meaty.

As for pasta, carbonara is made vegan through a blend of cashews, almonds, avocado oil, and a marinated tempeh. With chickpea spaghetti, the cashew and almond sauce acts as a cream with a dash of turmeric ($18). Chickpeas reappear in the base of a bowl of gnocchi, flavored with almond and tomato pesto ($18). There's also a blueberry flatbread, served warm and smeared with mascarpone, Gorgonzola, almonds, and honey ($10).

Next door, Carne unites meat and pasta in the form of gnocchi splashed with a lamb ragù ($21). Otherwise, the restaurant offers a six-ounce filet mignon drizzled with black truffle ($36), a New York strip garnished with a tangy balsamic reduction ($34), and a Wagyu beef burger with jalapeño guacamole ($18 to $22). 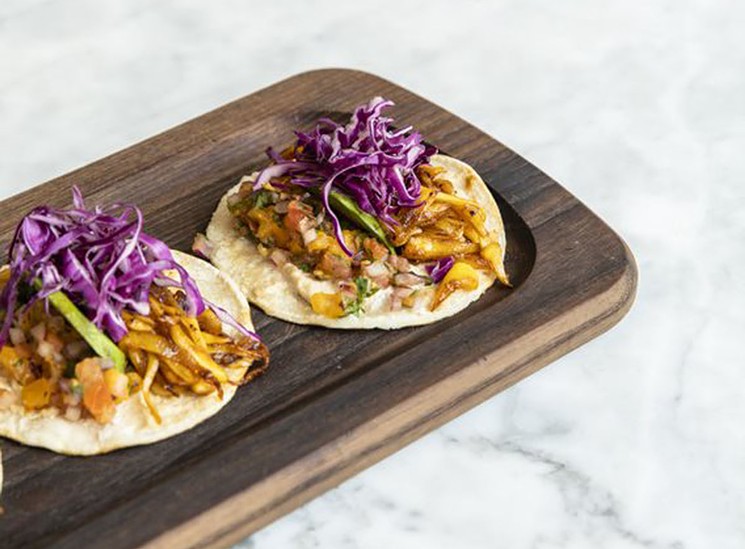 Then there's Pesce, a sleek, cream-colored eatery specializing in fish. Try the spaghetti with Manila clams. The pasta is cooked al dente, and the dish contains a delicate white wine broth ($19). This is also the place to savor langoustines flown in from the Mediterranean and lobster ravioli sprinkled with bitter tarragon leaves.

Of the three eateries, you'd do best to try Stagionale. Prices at the vegan spot are the most reasonable, averaging $13 per item. Dishes such as a corn risotto or coconut milk curry rice are more interesting than traditional steak or pasta.

Conclude your second-floor sojourn with a trip to the gelateria Venchi. A cousin of one of Italy's most famous gelaterias, it includes 80 kinds of chocolate and more than a dozen flavors of Italian ice cream. Stop by for a scoop of strawberry with a drizzle of hazelnut chocolate syrup ($5 and up).

The third level is the most exclusive and possibly the most expensive, depending upon your choice of wine. Up here, find Enoteca, a wine bar cellar, which serves small bites and regional Italian wines curated by a sommelier. Inside the dimly lit space filled with red bricks and wooden barrels, a $20 prix fixe includes crostini spread with chicken liver pâté, white wine-braised baby octopus, and pappardelle with creamy mushroom and Tuscan sausage. Bottles range from a $32 Valpolicella Classico Superiore red to an $88 Italian white called Friulano.

"We pour and sell around 1,000 bottles of wine per week," Giustiniani says. "Our wine selection is extensive. Most guests come for a bottle and a charcuterie board."

In the past year, food halls have spread like fire across Miami. Among the newly opened are Wynwood's 1-800-Lucky, the Design District's St. Roch and Aventura Mall's Treats Food Hall. Others are still on the way: Time Out Market and Lincoln Eatery in Miami Beach, the Citadel in Little River, and CentraleFare in downtown Miami.

Still, La Centrale is unmatched. This juggernaut balances grab-and-go and fine dining. It can be anything a customer wants or needs, from a quick and cheap bite to fine food. There's little question the reasonably priced ground-floor options match well with the chic vibe of Brickell City Centre, but it remains to be seen whether customers will fork out for tabs that soar as you climb the stairs. In any case, it's no other Miami food hall offers the diversity in both price and selection of La Centrale.