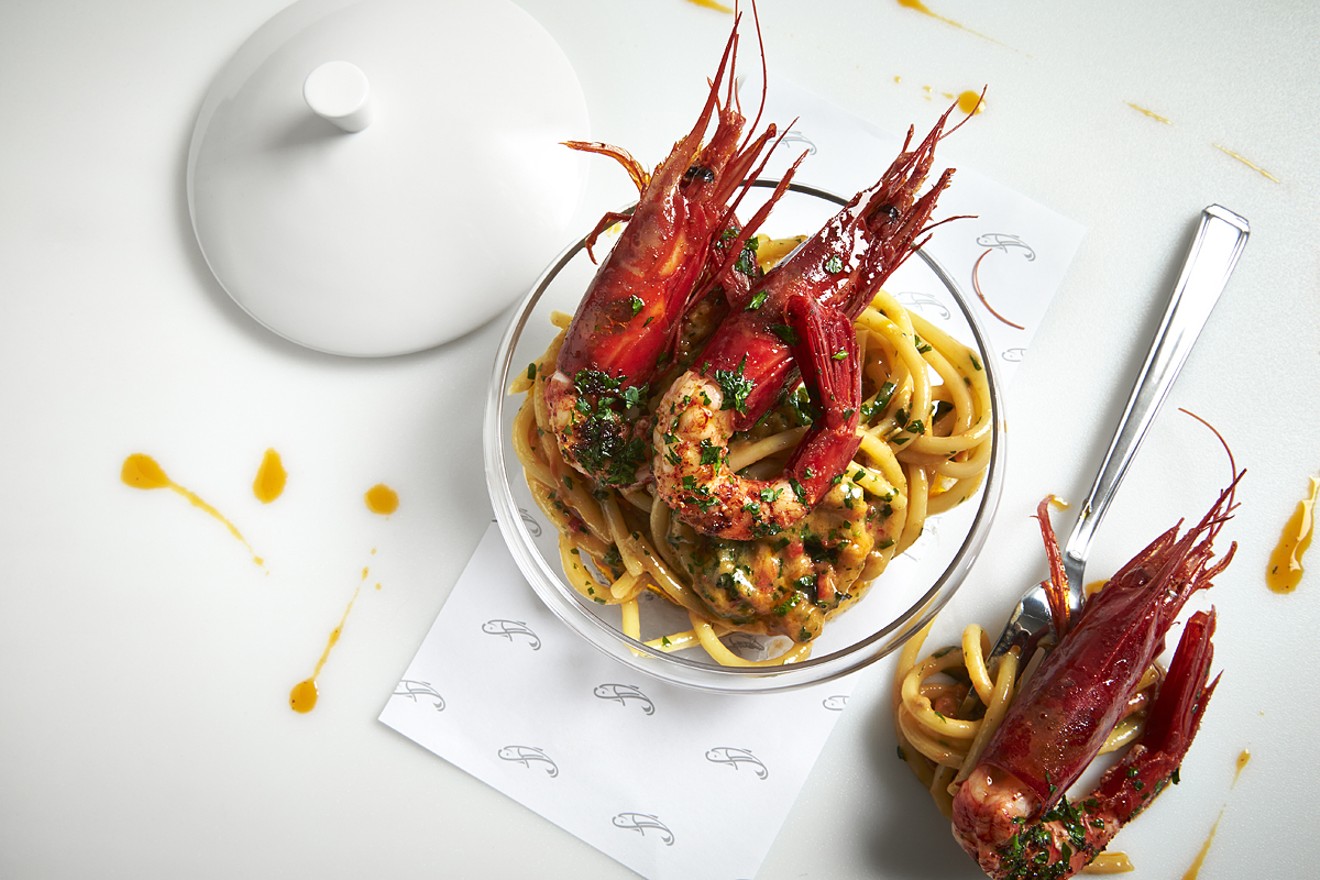 An overwhelming joy hides in a wide bowl of crushed ice adorned with an ounce of caviar, three of the vivid red Spanish shrimp called carabineros, buttery slices of hamachi lounging in rosewater, and sweet, slightly briny sea scallops spritzed with lime and fresh coconut milk.

Such delights don't come cheap, but at Fiola Miami (1500 San Ignacio Ave., Coral Gables; 305-912-2639; fiolamiami.com), plenty of the $200 platters circulate around a bustling dining room before finding their places on white tablecloths surrounded by men and women wearing tailored suits and blinding jewelry. A table at the month-old restaurant from James Beard Award-winning and Michelin-starred Washington, D.C. chef restaurateur Fabio Trabocchi has quickly become one of the hardest to get.

Even on a recent Wednesday night, the muted space, whose focal point is a glass-walled wine room with bottles climbing no less than 20 feet into the air, was full past 10 p.m. From that drinkable encyclopedia of vintages, a well-dressed sommelier poured a cascade of wine for each of the seven, perfectly timed courses that emerged from Trabocchi's spotless copper kitchen while the stoic, 44-year-old chef watched like a lion hiding in high brush.

A table at the month-old restaurant has quickly become one of the hardest to get.

Unfortunately, not every guest is guaranteed to receive such an experience at Fiola. Spirits scion Facundo Bacardi is Trabocchi's partner, and the pair has invested heavily in this space and its sizable staff. They also put considerable effort into identifying members of the food media, so all of that extravagant seafood and wine appeared without request and didn't make it onto the bill. That being said, from the apparent experiences of surrounding tables over the course of two nights, it seems Trabocchi's waitstaff and kitchen are dedicated to the kind of precision cooking and service achieved by the growing group of truly excellent restaurants that have taken root in Miami over the past five to ten years. 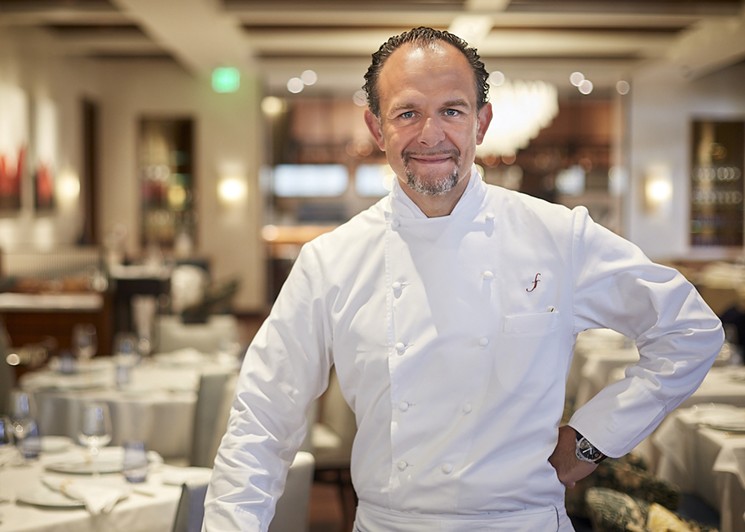 Fiola is among a group of Michelin-starred restaurants that recently arrived here. In January, New York City's Sushi Azabu opened on Ocean Drive. In August, Thomas Keller, one the most influential American chefs of the past generation, opened the Surf Club Restaurant in a historic property of the same name attached to a glittering glass Four Seasons.

Trabocchi was born in Osimo on Italy's Adriatic coast. His father was a farmer in a town that straddled the sea and the mountains, and his large, food-obsessed family knew Trabocchi wanted to cook from the time he was a teenager. After culinary school, an opportunity arose to take over one of his mentor's restaurants in Moscow. Later he a became a kind of roving chef for Bice, a high-end chain of Italian restaurants worldwide with at least three locations in South Florida. In 1995, he became the chef for one of its Washington, D.C. locations, at 601 Pennsylvania Ave. A decade and a half later, became available and Trabocchi turned it into Fiola, which today boasts one Michelin star.

Since then, he's gone on to open a fleet of restaurants equally adored by critics, well-heeled diners, and D.C. powerbrokers. Trabocchi recently made news when he had to hire security after a group of activists charged Texas Sen. Ted Cruz while he was dining with his wife. The former Republican presidential candidate was forced to hide in the kitchen while police were called to clear out protestors.

Meanwhile, the original Fiola's Michelin star has been a kind of catnip for Miami's masters of the universe, and for good reason

A bevy of house-made provides a comforting respite from all of the precious seafood and wine, and none more so than the ($32). The elongated ovals with pointed ends are tinted green to resemble olive leaves and bathed in a smooth Bolognese enriched with braised pork, beef, and pancetta. Craggy bits of di fossa add a salty punch to each bite while restraining the intense sauce. It's unclear whether every table's pasta received a generous portion of shaved white truffle, but it certainly didn't hamper the experience.

As with many places around town these days, e ($24) is a must, and Fiola is no exception. Here, the classic Roman dish comes with noodles halfway between dimpled orecchiette and Velveeta shells to ensure every bite has plenty of sauce — a blend of sheep's-milk Pecorino cheese, Parmigiano-Reggiano, and black pepper. The wonderfully al dente bucatini ($38) boasts a similar delightful sauce made with sea urchin and Espelette pepper. The dish is deeply satisfying yet possesses the light airiness of the sea, amplified by a pair of head-on Royal red shrimp.

Alongside many of the raw preparations is the extravagant-sounding oysters and caviar ($24), which comes in a gold-accented teacup and is topped with a slice of crisp Sardinian bread. It's an indispensable because the combination of shucked oysters with a dollop of caviar cloaked in a prosecco hollandaise has an almost slimy mouthfeel. Moreover, the intense, buttery emulsion at times overwhelms the otherwise delicate oceanic flavors. The only other misstep occurs in the porcini cappuccino soup ($20), whose velvety, mushroom reduction is too salty, especially when combined with the savory Parmesan foam that rests atop a quartet of picture-perfect ricotta-filled cappelletti

The kitchen quickly recovers with the bison tartare ($24). Lean, flavorful cubes of ruby-red meat with pickles, mint, shallots, and parsley arrive on a disk of stained wood dashed with swoops of Parmesan cream, maitake mushrooms, and a sunny-side-up duck egg. Once combined, the fragrant heap is a clever exhibition of flavor and texture, with salty, fatty richness pared back by the loamy mushrooms' crunch, a bit of minty freshness, and a touch of acid from the pickles. There's similar sophistication in the dish called "colors of the garden" ($20). The salad's blend of biting Italian radicchio and arugula with soy, radishes, and pink apples creates an astonishing flavor contrast that many cooks have trouble coaxing out of vegetables. A scattering of edible flowers and a long, crisp plank of toasted flatbread topped with swirls of creamy La Tur cheese make for an appealing presentation.

Most of the proteins here are offered à la carte in steakhouse fashion and range from a pound of wood-grilled wild calamari ($30) to a two-pound salt-crusted branzino ($90) or a tender, well-marbled 12-ounce portion of "" from Iberian pigs. Yet it seems to be the composed entrées that have earned Trabocchi his accolades and are the most enticing. The venison chop ($48) can be likened to autumn on a plate. The supple meat is pan-roasted with rosemary and juniper, served over a delicate chestnut purée, and crowned with a fragrant, wine-steeped apple and a slab of guanciale. The seared king salmon ($42) offers a subdued, just-cooked texture with the assertive, pleasantly oily flavor of real salmon, even if this is a farmed piece. The heap of smoked trout roe resting atop it provides a full range of flavors, and the bedrock of porcini mushroom purée and paper-thin slices of matsutake mushroom land additional jabs of savoriness and textural contrast

Though most tables are forced to decide which of the half-dozen desserts to order, Trabocchi saved the need for any debate and simply had managers bring out the whole lot. The worthiest among them was the milk chocolate hazelnut Gianduiotto ($13). The gold-covered orb encases a cloudlike cream of light, sweet cream rich with the flavor of slightly bitter chocolate and hazelnuts.

Despite the occasional , Fiola has opened with the kind of force and polish one would expect from a chef of Trabocchi's reputation. What remains to be seen is whether the kitchen, which will be helmed by executive chef Michael Fusano, can maintain the same pace and combine it with constant tweaks and revisions that have become commonplace at many of Miami's best restaurants.

Throughout the years, many big-name chefs have swept into town with much fanfare only to sweep themselves out a few months later. Fiola doesn't seem to be that kind of place. Given Trabocchi's background, his latest should grow into the kind of place that helps bolster the local dining community and turns out special-forces-caliber cooks who go on to make their own mark.