Food-Delivery Robots Are Roaming the Streets of Miami 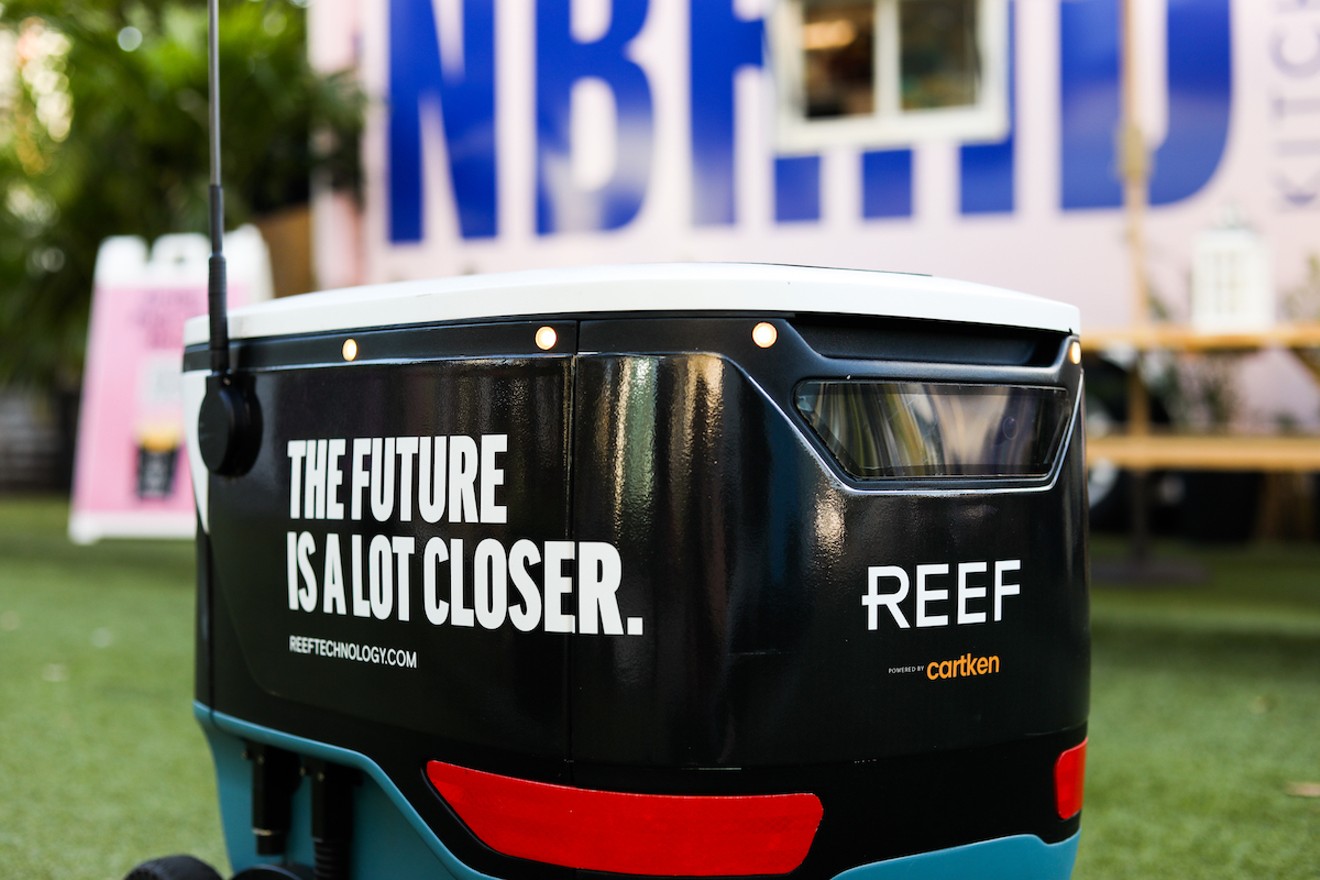 Reef is now using electric robots to make food deliveries in Miami. Photo courtesy of Reef Technology
If you see a black cart the size of a mini-cooler wheeling through your neighborhood, don't be alarmed. It might just be your neighbor's lunch.

Self-driving robots are now roaming the streets of Miami, delivering takeout orders to customers who opt for an automated driver instead of a human one.

The robots are the result of a collaboration between Miami-based Reef Technology, one of the largest operators of so-called ghost kitchens in North America, and Cartken, a self-driving delivery robotics startup. The robots officially launched in downtown Miami this month.

"Miami is just the start," Lindenberger tells New Times. "We are planning to expand to other neighborhoods in Miami-Dade and Broward counties soon, as well as other large metro areas where Reef operates, such as Atlanta, Los Angeles, Dallas, and New York. Eventually, we plan to offer the option for customers to choose robot delivery on the major food delivery platforms Reef works with."

Consumers who order from a Reef partner brand using Postmates, UberEats, DoorDash, or GrubHub may be prompted with the option of a robot delivery. Those who choose the robot option will be alerted via text message when the robot arrives, typically within 30 minutes. The robot’s food compartment is locked so that no one but the recipient can access the order.

The robots’ sophisticated mix of sensors and cameras help them navigate busy sidewalks and crosswalks, as well as over steps and curbs.

According to Anjali Jindal Naik, co-founder and COO of Cartken, the devices' sophisticated AI leverages the company's expertise in self-driving cars. The first robots launched in California, followed by the company's partnership with Reef in Miami.

"Our team was able to develop a fully integrated system in less than a year," says Naik. "The robots are designed to be pedestrian-friendly and not overcrowd the sidewalk. They are the size of a small cooler and fit three grocery bags. They can go up to five miles per hour and can travel anywhere there’s a sidewalk. Moving forward, we hope to have them access multiple-level buildings through elevators and potentially escalators."

Miami's two electric-powered bots have been on the road for several weeks, and are currently servicing delivery-only kitchens to recipients located within a three-quarter-mile radius of downtown Miami. Reef says it will be rolling out more Cartken robots in additional locations and neighborhoods within the coming weeks.

Beyond creating an entertaining way to receive your food, Lindenberger says the robots help its local partners meet the increasing demand for delivery. The robots operate during peak hours, increasing efficiency and preventing "bottlenecks" — periods when numerous delivery orders are placed at the same time.

"Each is currently averaging about two orders per hour," Lindenberger reports. "Volume-wise, we expect about 250 deliveries per month per bot, giving us a 47 percent reduction in delivery costs when using the robots."

Lindenberger says the company began piloting its bots in downtown Miami several months ago, and was pleased with the how well they were able to interpret their environment and quickly react to obstacles. Should one of them run into an unknown situation, a member of Reef's supervisory team can operate the robot via remote control — or even accompany it on its journey.

"We want to show how future-forward Miami can be," Lindenberger says. "The combination of us having a big presence in Miami and the fact that there are a lot of challenges around congestion as COVID subsides, shows a really good environment where we can show how this tech can work."
KEEP MIAMI NEW TIMES FREE... Since we started Miami New Times, it has been defined as the free, independent voice of Miami, and we'd like to keep it that way. With local media under siege, it's more important than ever for us to rally support behind funding our local journalism. You can help by participating in our "I Support" program, allowing us to keep offering readers access to our incisive coverage of local news, food and culture with no paywalls.
Make a one-time donation today for as little as $1.