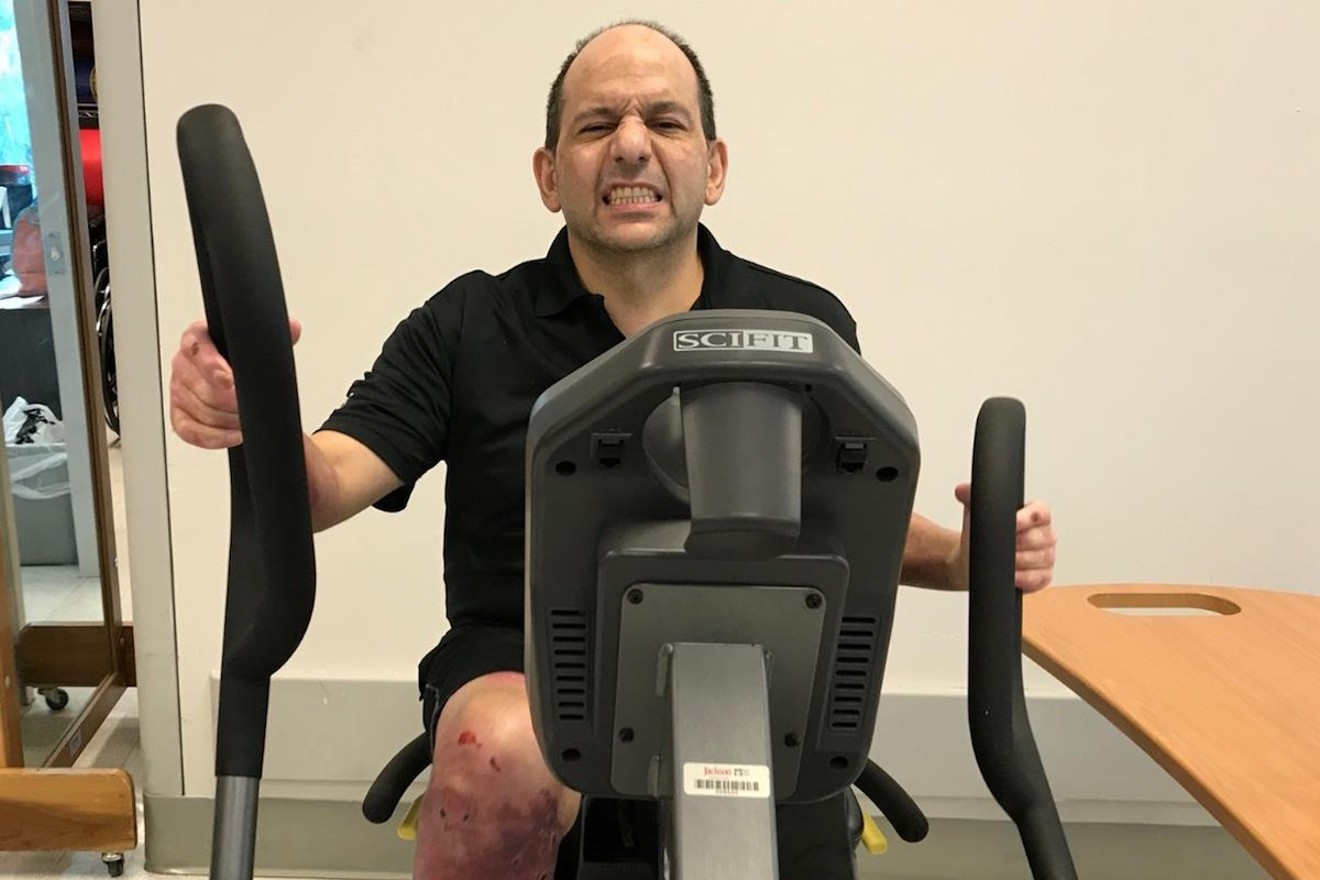 The chef was released from the hospital at 1 p.m. today, after doctors signed off on his "parole" following a long morning of physical therapy.

The chef was airlifted to the hospital on June 22 after suffering second- and third-degree burns to about 40 percent of his body when an oven exploded at Resorts World in Bimini, Bahamas. Pagano was set to open an outpost of his popular South Beach restaurant, Naked Taco, at the hotel complex. That restaurant, says Pagano, will never happen. Since then, the chef has endured four surgeries on his hands, arms, and legs along with countless hours of therapies, painful bandage dressings, and days of down time.

Pagano says although there's a long road ahead, he's looking forward to going home to Boca Raton to his wife and twin toddlers, Vincent and Charlie. Pagano is still considered an outpatient of Ryder and will continue to receive ongoing physical and psychological therapy.

Pagano's legs.
Photo by Laine Doss
The answer to the big question — when will the chef return to the kitchen — is still unknown.

Dr. Louis Pizano calls this phase one of Pagano's recovery, describing burns as one of the most difficult of injuries: "You have the pain associated with the burn, the pain of the dressings, then the pain of physical therapy." Pizano then addressed the psychological damage that can also occur — something that can run much deeper than a burn scar. "As much as patients don't like to admit it, sometimes they can't be near any source of heat. Sometimes they're afraid to do a job they've done forever. You really don't know how much it really affects a person."

Through this ordeal, Pagano hasn't lost his sense of humor and his ability to see the light at the end of the tunnel. During a press conference earlier, the chef said he initiated Taco Tuesdays for fellow patients and staff at Ryder and made friends with many people facing similar treatment, finding common ground in their universal healing. "We're all kindred souls here. We all share our stories."

Pagano says that the perpetual fear of a chef is getting burned. "In the kitchen we surround ourselves with knives and fire and grease. I recommend to all my chef friends that even though Ryder is the best center, stay away as hard as you can. Don't get burned. But if you do, there's light at the end of the tunnel."

With that, the chef slowly walked to a car waiting to take him home, but not before pondering whether he could make it to Gulfstream Park to watch a race he bet on today. "Today may just be my lucky day."