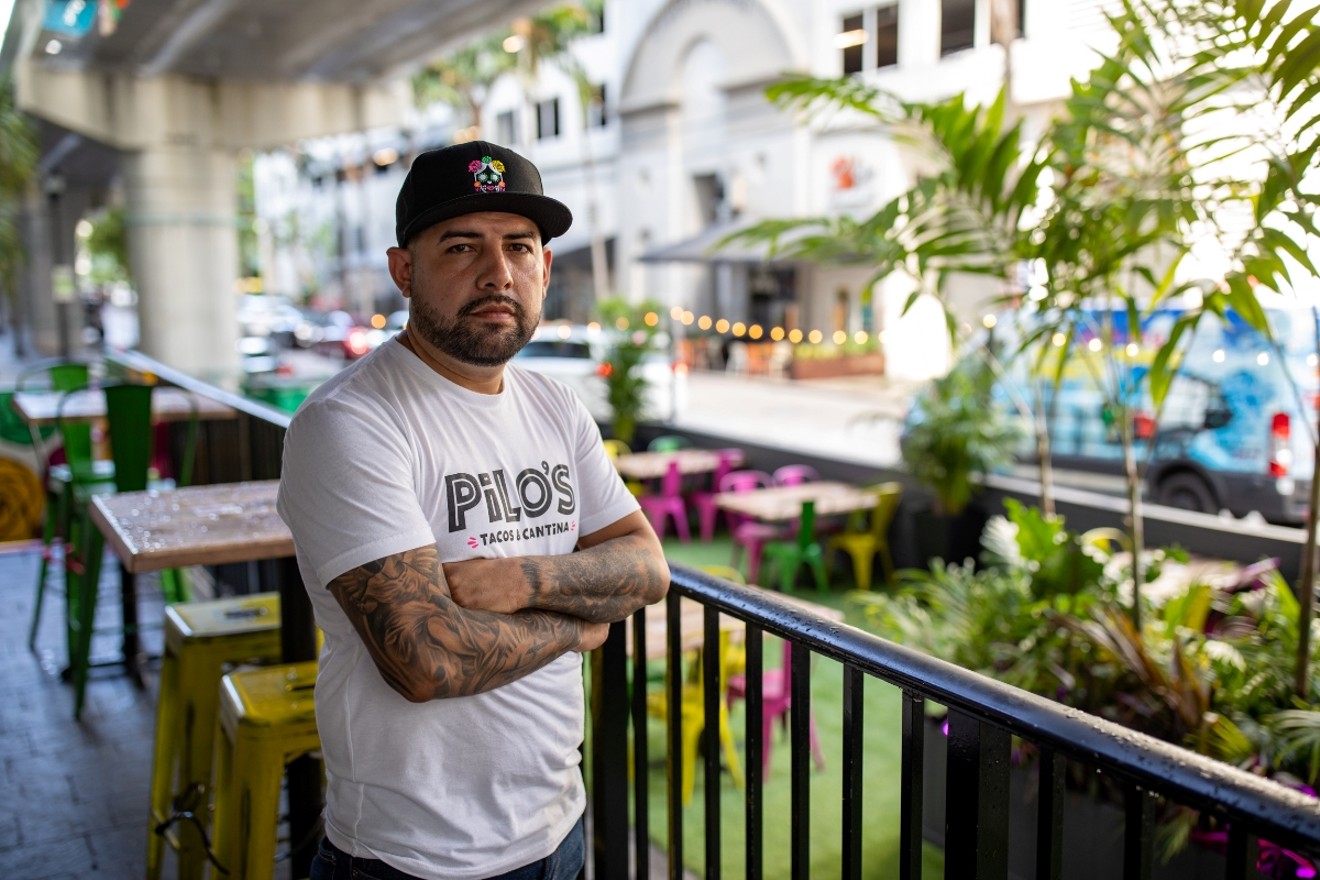 Chef Erick Lopez throws a mean taco party. Photo courtesy of Pilo's Street Tacos
Fall is officially here. The temperatures have become comfortable in Miami, football season is in full swing, and we're gearing up for the holidays.

There's no better time to invite friends over for a get-together. And there's no better get-together than one with tacos. Tacos are the ultimate food — they're portable, customizable, and delicious. They go with everything from beer to margaritas to an ice-cold Mexican Coke and they're one of the few items that can be enjoyed for breakfast, lunch, or dinner. And, of course, there's taco Tuesday — an entire day of the week devoted to the beloved item.

As corporate chef and general manager for Pilo's Street Tacos, Erick Lopez is an expert on the subject. New Times tapped his expertise on how to throw the ultimate taco party at home. From where to source the best tortillas in Miami to what to drink with your tacos, here are chef Lopez's tips on how to host the best taco party ever.

Everything Starts With Good Tortillas

Tortillas are the foundation of every taco, and Lopez quickly puts an end to the flour vs. corn debate. "Corn tortillas are always the way to go," he notes, adding that they last longer. At Pilo's, Lopez's team makes fresh corn tortillas daily, but he says there are plenty of places in Miami where you can buy fresh tortillas. "I like to go to the Homestead Mexican Market on weekends. I make a day of it," he says. Before your guests arrive, heat any type of nonstick skillet or sauté pan and heat the tortillas in them one by one. To keep them warm, put them in a bowl with a little towel and cover them. "That keeps them warm until your guests arrive," says Lopez.

Lopez suggests preparing a few different fillings beforehand. "In Mexico, a traditional taco is carne asada," he says. To make carne asada, choose a thin cut of beef, char-grill it quickly, then slice the meat into thin pieces. For chicken, marinate the pieces overnight, then sear them on the grill and cut them into small pieces. Lopez also suggests grilling some vegetables for your guests. "Personally, I like a mixture of mushrooms, asparagus tips, zucchini, and cauliflower. I sauté with some oil, garlic, salt, and pepper," says the chef.

As a final touch, Lopez suggests providing at least three sauces. "I like to offer a spicy hot sauce, a medium sauce, and one that's not spicy at all," he says. Lopez says you can buy your sauces, or make a simple pico de gallo at home by putting chopped onion, tomato, cilantro, salt, pepper, and lime juice in a blender and pulsing until it's the consistency you like.

People love guacamole, so offer guac and chips to your guests as a snack when they arrive. Be sure to save some for the tacos.

"Nothing goes better with tacos than tequila," says Lopez. In addition, the chef suggests having some cold beer on hand. Lopez also suggests making a spicy twist on a mimosa if your taco party is in the afternoon. "Instead of orange juice, try a little mango juice, top it with sparkling wine, and add a touch of Tajin chili lime flakes. You can also rim the glass with it."

If you love tacos as much as chef Lopez does, don't forget to visit him at Pilo's or join him at New Times' Tacolandia event on Saturday, November 12, from 3 to 6 p.m.

The event will feature more than 20 of South Florida's best restaurants, each featuring a dish that showcases their idea of a taco. Participating restaurants include La Catrina, Kombi Keg, Ecléctico Restaurant & Bar, Goya, and Yip, with more to be announced.

Eventgoers will have access to unlimited taco samples, unlimited beer and cocktails, and entertainment.

General Admission tickets cost $40 and include entry into the event at 3 p.m., unlimited tacos, beverage samples, and musical entertainment.

VIP Admission tickets cost $60 and include early entry into the event at 2 p.m., unlimited drinks, an exclusive lounging area, a commemorative gift, and exclusive restaurants.

Gather a group and take advantage of the Fiesta Four Pack, where you'll get four general admission tickets for $110. Purchase tickets at etix.com — but hurry before they sell out.

New Times' Tacolandia. 3 to 6 p.m. Saturday, November 12, at Regatta Park, 3500 Pan American Dr., Coconut Grove; newtimestacolandia.com. Tickets cost $40 to $60 at etix.com.
KEEP MIAMI NEW TIMES FREE... Since we started Miami New Times, it has been defined as the free, independent voice of Miami, and we'd like to keep it that way. With local media under siege, it's more important than ever for us to rally support behind funding our local journalism. You can help by participating in our "I Support" program, allowing us to keep offering readers access to our incisive coverage of local news, food and culture with no paywalls.
Make a one-time donation today for as little as $1.