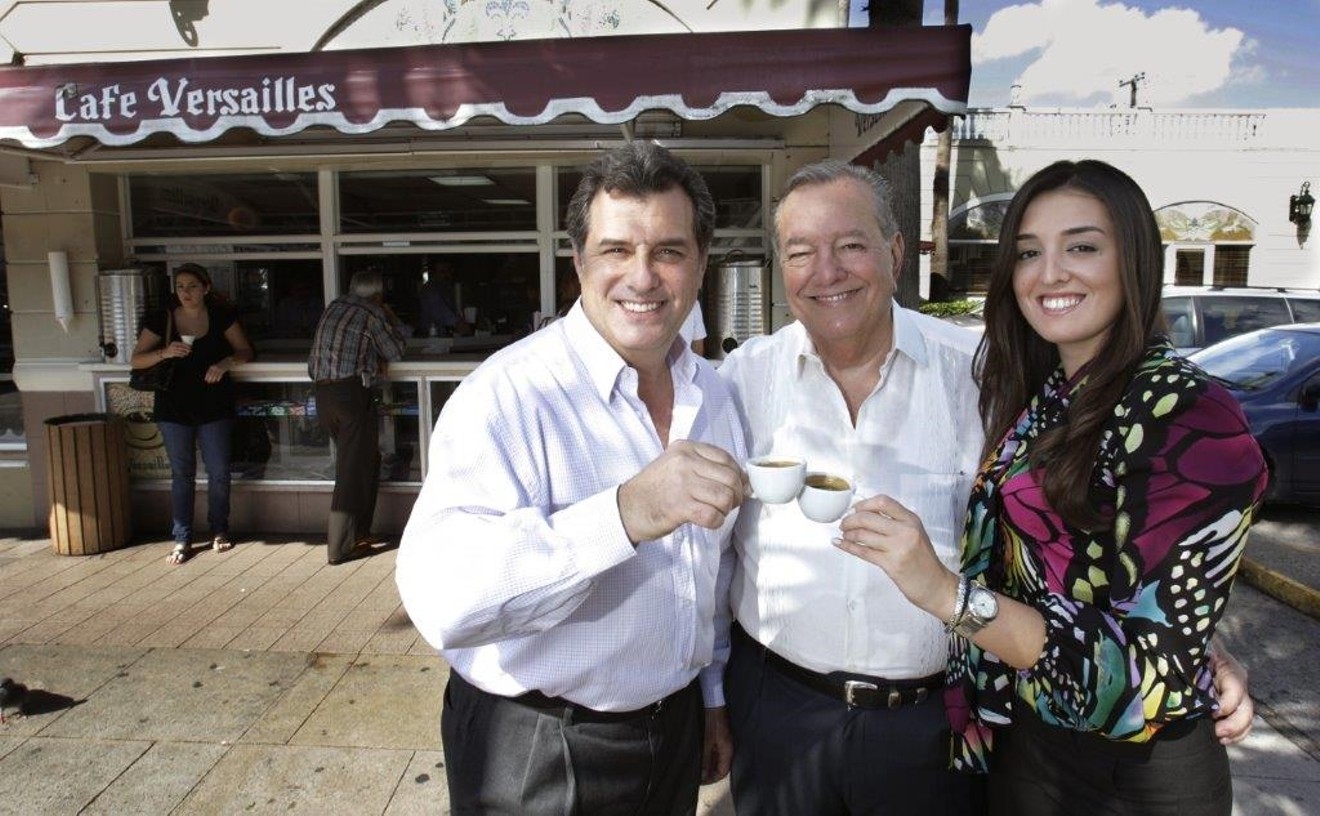 Felipe Valls, Sr. (center), with Felipe Valls, Jr. (left) and Nicole Valls (right) Versailles photo
When Felipe Valls Sr. fled Cuba in 1960 with his wife and children, he likely had no idea of the impact he'd have on Miami's culinary and political scenes.

Valls, who founded Versailles restaurant in Miami's Little Havana neighborhood, died this past Saturday at 89.

Over the course of half a century, Valls grew his business. The entrepreneur started his career trajectory in Miami importing espresso machines from Italy and Spain. He raised enough money to purchase a small restaurant in Little Havana called Badia's and sold it to open Versailles.

Through Versailles, Valls introduced Miami to the ventanita, a walk-up window that serves coffee and sandwiches. That ventanita — and Versailles — has become more than a restaurant. It has become the unofficial gathering place for Cuban-Americans to protest and celebrate.

When Barack Obama was re-elected for a second Presidential term, there were protests outside Versailles, with cars draped in "Fire Obama" banners.

And when Fidel Castro died on November 25, 2016, thousands flocked to Versailles to wave the Cuban flag, bang on pots, and toast the death of the notorious dictator with a cafecito.

Versailles was also a required stop for politicians wanting to woo Miami's Cuban community. In 2016, Donald Trump and Rudy Guiliani stopped by, unannounced, for a cafecito and a photo op.

Valls Sr. passed the business into the hands of his son, Felipe Valls Jr., who is the current CEO and president of Valls Group.

The elder Valls leaves behind his son Felipe Jr., daughters Leticia and Jeannette, and numerous grandchildren and great-grandchildren.

The family will host a visitation at Caballero Rivero Funeral Home (3344 SW Eighth St., Miami) on Wednesday, December 7, from 5 to 10 p.m. and Thursday, December 8, from 1 to 10 p.m. In lieu of flowers, the Valls family requests donations to be made to the Jackson Health Foundation.
KEEP MIAMI NEW TIMES FREE... Since we started Miami New Times, it has been defined as the free, independent voice of Miami, and we'd like to keep it that way. With local media under siege, it's more important than ever for us to rally support behind funding our local journalism. You can help by participating in our "I Support" program, allowing us to keep offering readers access to our incisive coverage of local news, food and culture with no paywalls.
Make a one-time donation today for as little as $1.