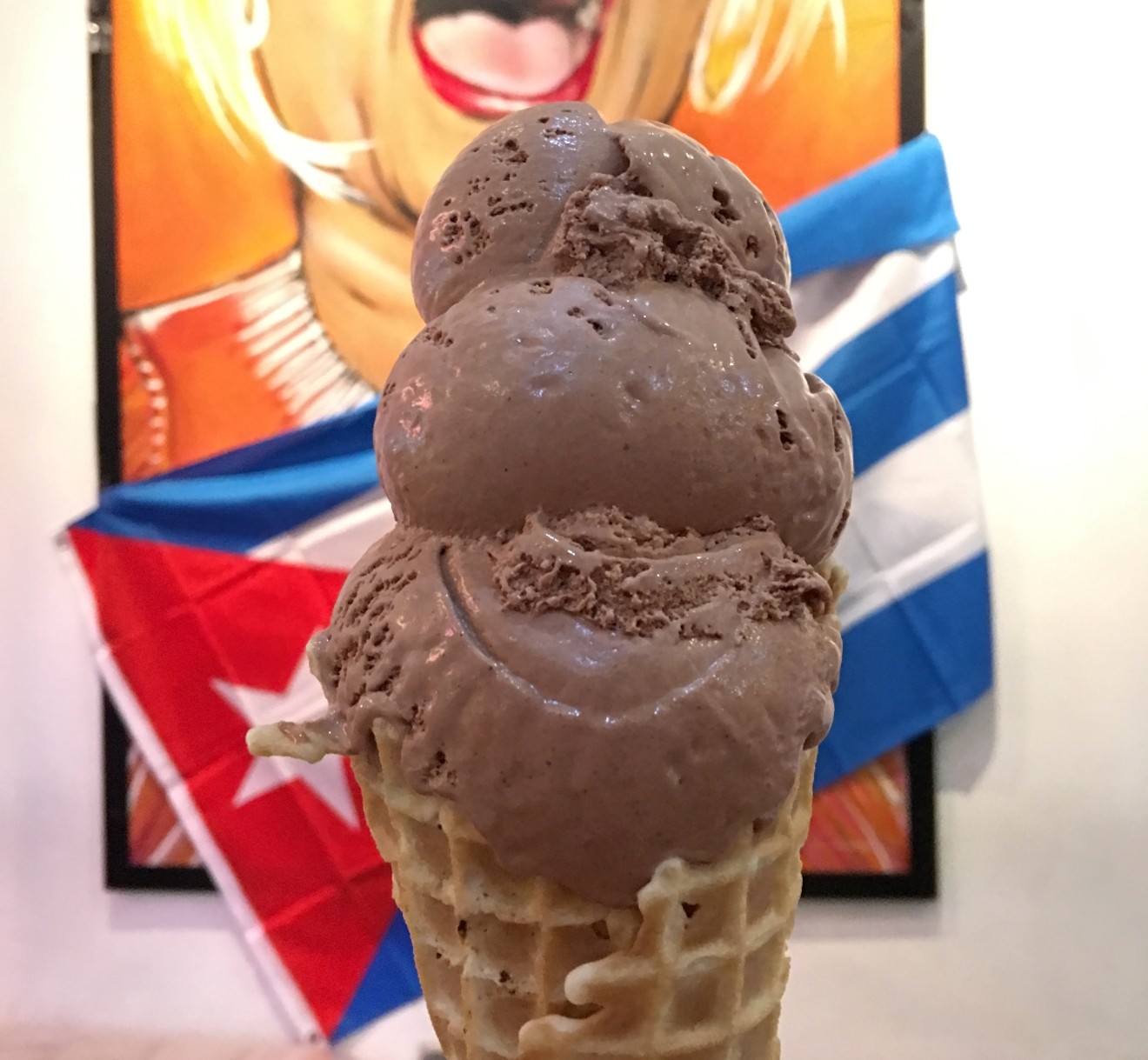 Burn in Hell, Fidel! Courtesy of Azucar Ice Cream
Update July 15: Sweet Melody Ice Cream has just announced a limited edition ice cream flavor to raise money and awareness to help the people of Cuba. The story has been updated with details (below).

The world is watching the citizens of Cuba take to the streets in protest of a government that has failed them for six decades.

Fueled by economic turmoil and a surge in COVID cases, thousands of Cubans are protesting throughout the island nation. U.S. President Joe Biden has issued a statement in support of the demonstrations.

Cuban-Americans in Miami are responding to the protests in myriad ways. On Sunday, about 5,000 people congregated outside Versailles restaurant in Little Havana to show solidarity for the protests, with many more people taking to social media to voice their support.

Mike Romeu, owner of Sweet Melody Ice Cream, posted an image of the Cuban flag on his shop's Instagram, with the words, "We’ve had enough! The place of my birth will be free! Viva Cuba libre!"

Romeu was born in Cuba but when he was two, his family made their way to the United States via France. He says there's nothing he'd like better than to take his daughter Melody, now nine, to see where her family comes from.

"I have zero recollection of the place where I was born, but it's still the place that makes me who I am," Romeu says, adding that although his parents vowed to never return to Cuba until it was free of its current dictatorship, he had planned a trip to the island with his grandmother. "She was willing to go with me, and that would have been the most amazing trip, but she's in hospice now."

Romeu shares stories his mother told him of living in Cuba. "She would wait in line for hours to get diapers. She would get two or three and have to wash them. My brother had only one pair of jeans that he would wear every day."

Romeu says he feels the best scenario is for the Cuban people to take back their own country.

"There are people that don't fully understand the situation on that tiny island, but if people are willing to risk taking a small boat in shark-infested waters, that shows how bad things are. I think this time people have literally had enough." Watching videos of the protests, he says, has been shocking. "I've been brought to tears a few times."

Romeu has introduced an ice cream that celebrates Cuban culture. Cuba Libre is a Bacardi rum ice cream flavored with a hint of cola and lime. The ice cream also has Coca Cola-infused milk chocolate fudge and is available today (July 15) until supplies last. Romeu is also looking for an organization that will benefit from the sales of the ice cream. Post suggestions to Sweet Melody's Instagram @sweetmelodyicecream.

As CEO of the popular Cuban restaurant chain Sergio's, Carlos Gazitua is concerned about his Miami employees.

"Many of the people who work at Sergio's have family and friends in Cuba. It's been tough yesterday and today. They're trying to get word from their people," Gazitua says. Customers have also come in to share news and commiserate with fellow expatriates. "We are all holding our breath to see what happens."

Gazitua says that, although protesting the government is dangerous, most agree that their family in Cuba must push forward. "They fear that if they stop there will be much reprisal against them. They need the courage to keep going." The restaurant executive says that he thinks the next few days will be pivotal to Cuba's future. "From what I've heard, the people of Cuba have no food, no medicine. They've reached a breaking point. They're not scared anymore."

Suzy Batlle's Azucar ice cream shop is directly on Calle Ocho, where the streets are filled with protesters. In a personal show of solidarity, she's making the ice cream flavor that commemorated the death of Fidel Castro back in 2016.

"'Burn in Hell, Fidel' is back and it's back for good," says Batlle, who started making the ice cream again yesterday morning. Though ice cream is a whimsical treat, Batlle knows the stakes are high in Cuba. "This is the rise the people needed. You can't oppress these people anymore. They don't have food, they don't have water, they don't have vaccines. But you put a Cuban in a corner and we'll fight."

Batlle says the ice cream is her way to show support of the people in Cuba. "They're so brave. They're getting out on the street. They have no guns, and the government does. How courageous."

If you're of a mind to eat your feelings, "Burn in Hell, Fidel" is made with Exquisito chocolate with a generous hit of cayenne pepper.

"It takes about ten seconds to get to you," Batlle says. "Then you feel the kick. The same kick I hope the Cuban government feels."
KEEP MIAMI NEW TIMES FREE... Since we started Miami New Times, it has been defined as the free, independent voice of Miami, and we'd like to keep it that way. With local media under siege, it's more important than ever for us to rally support behind funding our local journalism. You can help by participating in our "I Support" program, allowing us to keep offering readers access to our incisive coverage of local news, food and culture with no paywalls.
Make a one-time donation today for as little as $1.