Sticky-Bun Doughnuts, $3.14 Pies, Salt & Straw CocoWalk, and Other Events in Miami This Weekend 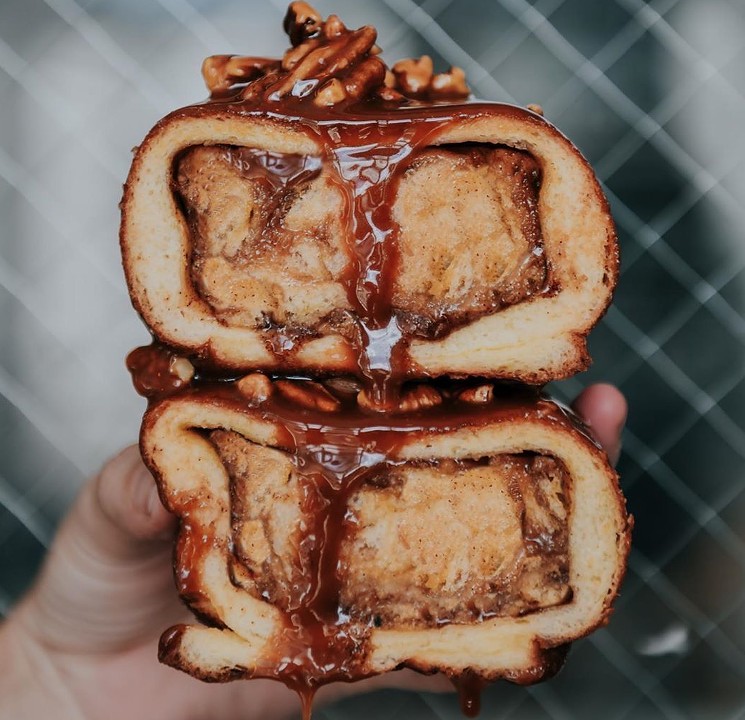 Your chances of grabbing this sweet collaboration this year are better than ever.
Photo courtesy of the Salty

The Salty's legendary sticky-bun doughnut collaboration with Knaus Berry Farm is set to return this Friday, March 12. The special doughnut will be available through Sunday, March 21 at the Wynwood and South Miami stores until each day's supply sells out, as well as on Saturdays and Sundays at the Lincoln Road pop-up. Drenched in a roasted pecan-toffee-rum glaze and topped with caramelized pecans, the cinnamon roll/doughnut mashup is a labor-intensive proposition, so quantities will be limited. The doughnuts cost $6.95 apiece and are expected to sell fast — in years past, they've sold out every day, sometimes hours before closing time. Note: The doughnuts are not available via Uber Eats. Available Friday, March 12 through Sunday, March 21, at the Salty Wynwood, 50 NW 23rd St., Miami; 305-925-8126; the Salty South Miami, 6022 S. Dixie Hwy., South Miami; 786-409-4714; and the Salty Lincoln Road (Saturdays and Sundays only), 740 Lincoln Rd., Miami Beach; saltydonut.com.

In honor of the 14th anniversary of chef/owner Michael Schwartz's namesake restaurant in the Design District, Michael's Genuine Food & Drink is offering a socially distanced dinner on Sunday evening, featuring a six-course meal with seven wines. Highlights of the $250 prix fixe dinner include lobster pan roast, nine-spice duck confit, dry-aged grass-fed rib eye, and Basque-style cheesecake with Meyer lemon confit. The wines are supplied by Jim Clendenen of Au Bon Climat Winery in Santa Barbara. Beginning at 7 p.m. Sunday, March 14, at Michael's Genuine, 130 NE 40th St., Miami; 305-573-5550; $250 via opentable.com.
KEEP MIAMI NEW TIMES FREE... Since we started Miami New Times, it has been defined as the free, independent voice of Miami, and we'd like to keep it that way. With local media under siege, it's more important than ever for us to rally support behind funding our local journalism. You can help by participating in our "I Support" program, allowing us to keep offering readers access to our incisive coverage of local news, food and culture with no paywalls.
Make a one-time donation today for as little as $1.