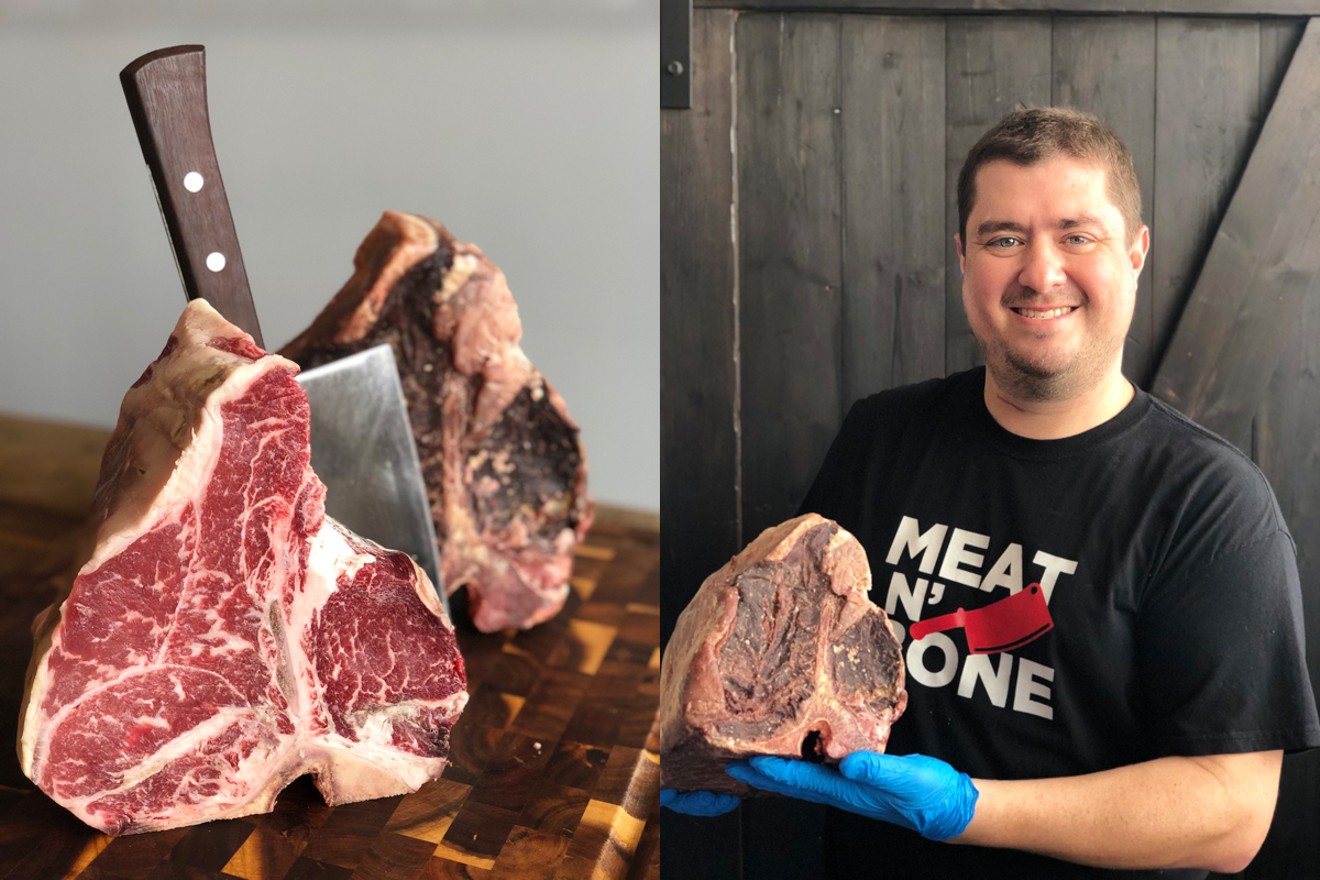 Meat N' Bone sells 45-day-dry-aged rib-eyes, New York strip steaks, and Japanese Wagyu. Courtesy of Meat N' Bone
A new report has damned global agribusiness and called for drastic changes in the way humanity produces and consumes food if we are to have any hope of staving off the disasters from accelerating climate change. The report, released in August by the United Nations' Intergovernmental Panel on Climate Change (IPCC), comes ahead of major climate and environment negotiations, such as the Conference of the Parties of the UN Convention to Combat Desertification in New Delhi, India, this September and the UN Framework Convention on Climate Change Conference in Santiago, Chile, in December.

The greatest change recommended by the report came in the consumption of animal flesh.

“We don’t want to tell people what to eat,” Nature.com, the online arm of the international peer-reviewed scientific journal, quoted Hans-Otto Pörtner, an ecologist who helped author the report and who co-chairs the IPCC’s working group on impacts, adaptation, and vulnerability. “But it would indeed be beneficial, for both climate and human health, if people in many rich countries consumed less meat and if politics would create appropriate incentives to that effect.”

"It is a luxury good at this point," he said in an interview with Spain's daily newspaper, El Pais. "What it costs to generate a piece of meat is crazy. The fuel, the energy, the labor, all of that is reflected in a piece of meat."

Gourmeat, which specializes in grass-fed Angus and Wagyu beef, was founded by the Albanell family in Uruguay, where it maintains three shops plus its Miami outpost, which opened about a year ago. All meat comes from 13 family farms and is fed into one processing plant where animals are selected for butchering and cuts are trimmed, vacuum-packed, frozen, and sent to the family's four shops.

"We have our own quality management — that is the first added value," Albanell said, "Second is the service provided by the people who are on premises."

On a recent visit, Gourmeat's coolers were a bit depleted due to shipping delays out of Uruguay, but there was still an abundance of Wagyu rib-eye ($27 per pound), Wagyu tri tip ($18 per pound), and Wagyu New York strip ($25 per pound), as well as sweetbreads ($14 per pound), whole picanhas, blood sausage, and Argentine-style sausage.

Courtesy of Meat N' Bone
One of the Wagyu strip steaks cooked up nicely, offering a deep grassy, meaty flavor. It was, as grass-fed meat is, chewier than cuts from cattle raised on grain, but a bit of fat (though not quite as much as one would expect from Wagyu) helped soften and enrich each bite.


Meat N' Bone sells 45-day-dry-aged rib-eye and Japanese Wagyu so heavily marbled it melts in your fingers as you lift it toward a hot pan.

West of Gourmeat stands Meat N' Bone (2267 Coral Way, Miami; 786-492-6328; meatnbone.com), a kind of beef tech startup by three longtime Miami friends who've always shared a love of meat. Though the three worked in different industries, they regularly came together for weekend cookouts and, after years of dissatisfaction with area markets and online retailers, decided to see what they could do themselves.

"We couldn’t find what we wanted," says partner Luis Mata, who works days as a finance executive for the technology and media school SAE Institute. "We would go to Graziano's; we would go everywhere. Then we started ordering online. We met some butchers."

They embarked on a crash course in the meat industry, talking to massive distributors such as JBS USA and a friend who owned Lichtfield, Michigan's Ferry Farms and eventually became a sourcing, supply, and logistical adviser for the meat supplier.

"We started learning where Pat LaFrieda and Allen Brothers get their meats and reaching out to farms and working with processing centers to start building relationships," Mata says.

They visited slaughterhouses in the Midwest and ultimately settled on a network of 35 farmers primarily in that region, as well as sources from Australia and Japan, to supply a diverse but necessarily limited product lineup that Mata says turns over every three days.

About 15 months ago, they launched their online shop, which has sent orders to more than 2,000 customers, and five months ago, they opened a small storefront where they can guide customers through the wide range of products.

Mata declines to name specific farms and abattoirs over concerns that would-be copycats might infiltrate and copy the logistics network that allows Meat N’ Bone to sell 45-day-dry-aged rib-eyes, New York strip steaks, and Japanese Wagyu so heavily marbled it melts in your fingers as you lift it toward a hot pan. 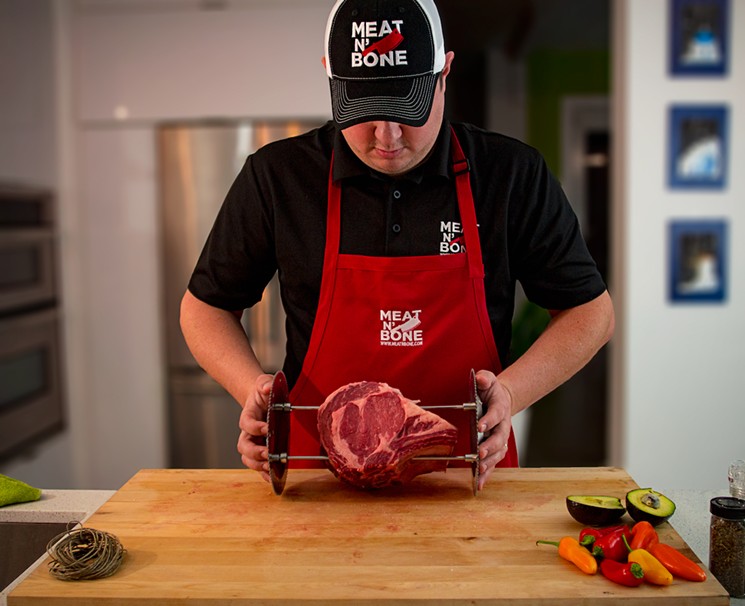 Courtesy of Meat N' Bone
"We use G1-certified beef; it's the top of USDA prime," Mata says, noting the company always uses Angus or Angus-Wagyu hybrids from Colorado's Mishima Reserve. "It's not only about the marbling — it's the age of the cow. We only work with cows less than 30 months old. They're more tender, with better flavor and less acid. We don’t want them to weigh more than 1,050 pounds."

Here you'll also find interesting so-called butcher cuts such as spider, hanger, flap, and outside skirt, as well as short rib, rabbit sausage, and whole turkeys around the holidays.

Meat N' Bone's dry aging, performed by a supplier in Chicago, yields supremely supple steaks heavy on that signature musty, nutty flavor. It was most distinct in the filet portion of a $65, 45-day-aged rib-eye thanks to the cut's proximity to the outer edge, where the strongest dry-aged flavor can always be found.

Is better meat the answer to the global problems caused by agriculture and livestock production? Certainly not. However, spending time in these shops with their owners, who've striven to learn more about the process and select its best results, comes with an understanding that meat is indeed a luxury. After cooking one of these steaks, you'll think twice the next time you're facing a seemingly endless supermarket row of shrink-wrapped horror.
KEEP MIAMI NEW TIMES FREE... Since we started Miami New Times, it has been defined as the free, independent voice of Miami, and we'd like to keep it that way. With local media under siege, it's more important than ever for us to rally support behind funding our local journalism. You can help by participating in our "I Support" program, allowing us to keep offering readers access to our incisive coverage of local news, food and culture with no paywalls.
Make a one-time donation today for as little as $1.