The ceviche cubano at Sala'o Photo by Ricardo Mejía/@rmstudiocorp
For decades, Calle Ocho has been known as the heart of Miami's Cuban culture. But until recently, the neighborhood was mostly filled with small cafés that specialized in basic Cuban comfort food.

The past few years, however, have brought an influx of more adventurous and wide-ranging establishments, from chef-driven kitchens like Michelle Bernstein's at Cafe La Trova to tacos and tequila at El Santo and a curated beer selection at Union Beer Store.

Most recently, Earl Campos Devine, Oscar Rodriguez, and Eliesteban Mena, partners at Old's Havana Cuban Bar & Cocina, set out to open a restaurant that offered a more contemporary turn on Cuban fare. The result, Sala'o Cuban Restaurant & Bar, opened in the summer of 2019 with a menu of fresh seafood, daiquiris, and a Hemingwayesque theme. Sala'o drew a lively crowd of tourists who flocked to Little Havana to visit Domino Park and sip daiquiris.

When COVID-19 brought dining-room closures and a precipitous drop in tourism, the ownership at Sala'o decided to revamp. The restaurant closed for two months in the spring, then reopened in June with an expanded outdoor patio and a new food-and-beverage program. Mena tells New Times that, although the shutdown was "a difficult time for everyone in the restaurant and hospitality business," it did present an opportunity for a positive change. Says Mena: "Through it, we saw a chance to elevate everything at Sala’o and reopen stronger than ever.”

Significantly, the partners brought aboard Alejandro Porben as executive chef. With an education from Le Cordon Bleu College of Culinary Arts in Miami and the Culinary Association of the Republic of Cuba and time spent in the kitchens of Scarpetta at the Fontainebleau Miami Beach, Pubbelly Sushi, and Zuma, Porben was tasked with creating new dishes that tapped into his Cuban roots but emerged lighter and brighter on the plate.

"Classic Cuban cuisine is comfort food. Think a lot of fat, carbs, and proteins served in large portions. They're delicious, but I wanted to go in another direction," Porben tells New Times. "This modern Cuban cuisine is more about using daring flavors, modern presentation, and new techniques while still honoring Cuban flavors and ingredients."

In keeping with the restaurant's Hemingway theme, Porben used The Old Man and the Sea as inspiration. He worked with local purveyors to buy the best seafood he could find. Sharable dishes include a ceviche cubano, made with corvina, red pepper, onion, and coconut leche de tigre ($12); a swordfish carpaccio with ponzu "caviar" and guava marmalade ($13); and sardine croquettes ($13). Main courses include pan-seared red snapper ($30) and a classic rendition of the seafood-and-rice dish arroz asopa’o de mariscos ($20). 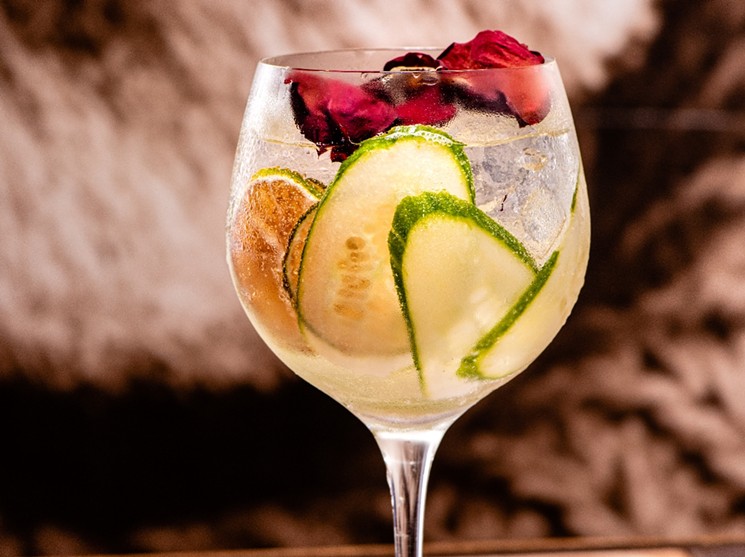 A gin and tonic at Sala'o.
Photo by Ricardo Mejía/@rmstudiocorp
The restaurant partners also brought on beverage mavens Ben Potts and Gui Jaroschy, who've formed a beverage consulting firm called Unfiltered, to revamp the cocktail program. The drinks play on classics of Cuban and Spanish origin. A mojito is made with Bacardi Superior, while the famous Hemingway daiquiri uses Bacardi Añejo 4; ergo its moniker, "Hemingway #4" ($13).

Though you'll likely start with a Hemingway #4 — and you should — be sure to ask for the gin-and-tonic cart to roll your way. Here, your bartender will make you a bespoke G&T, served in an oversize copa glass. Guests can choose their gin and mixers or select from recipes designed by Jaroschy and Potts. Selections include "The "Varadero," with Hendrick’s gin, Mediterranean tonic water, lemon, olive, and fresh rosemary; and the "Cayo Largo," with Hendrick’s Midsummer Solstice, Fever Tree Indian tonic water, dried grapefruit, thyme, and golden berry ($15 each).

Callo Ocho, like all parts of Miami, remains a shell of its usually vibrant self. Still, Sala'o is a good place to escape for an hour or two. On a recent evening, a two-piece band was playing music under the watchful eye of Hemingway, who gazed down from a mural. The restaurant was humming at about half capacity. The ceviche was tangy and the drinks were tall and cool. The restaurant, with a new menu and alfresco seating, is ready to welcome a new set of diners.

Porben, who is still working on new items, including a Sunday brunch, says that he thinks about Hemingway and The Old Man and the Sea a lot these days. "I’m definitely a fan of Hemingway and his novel. One thing that has always stuck with me from his book is the importance of perseverance. It’s made me who I am today, and it's what drives me forward."

Sala’o. 1642 SW Eighth St., Miami; 305-642-8989; salaorestaurant.com. Daily noon to 10 p.m.; brunch served Sunday 11 a.m. to 4 p.m.
KEEP MIAMI NEW TIMES FREE... Since we started Miami New Times, it has been defined as the free, independent voice of Miami, and we'd like to keep it that way. With local media under siege, it's more important than ever for us to rally support behind funding our local journalism. You can help by participating in our "I Support" program, allowing us to keep offering readers access to our incisive coverage of local news, food and culture with no paywalls.
Make a one-time donation today for as little as $1.