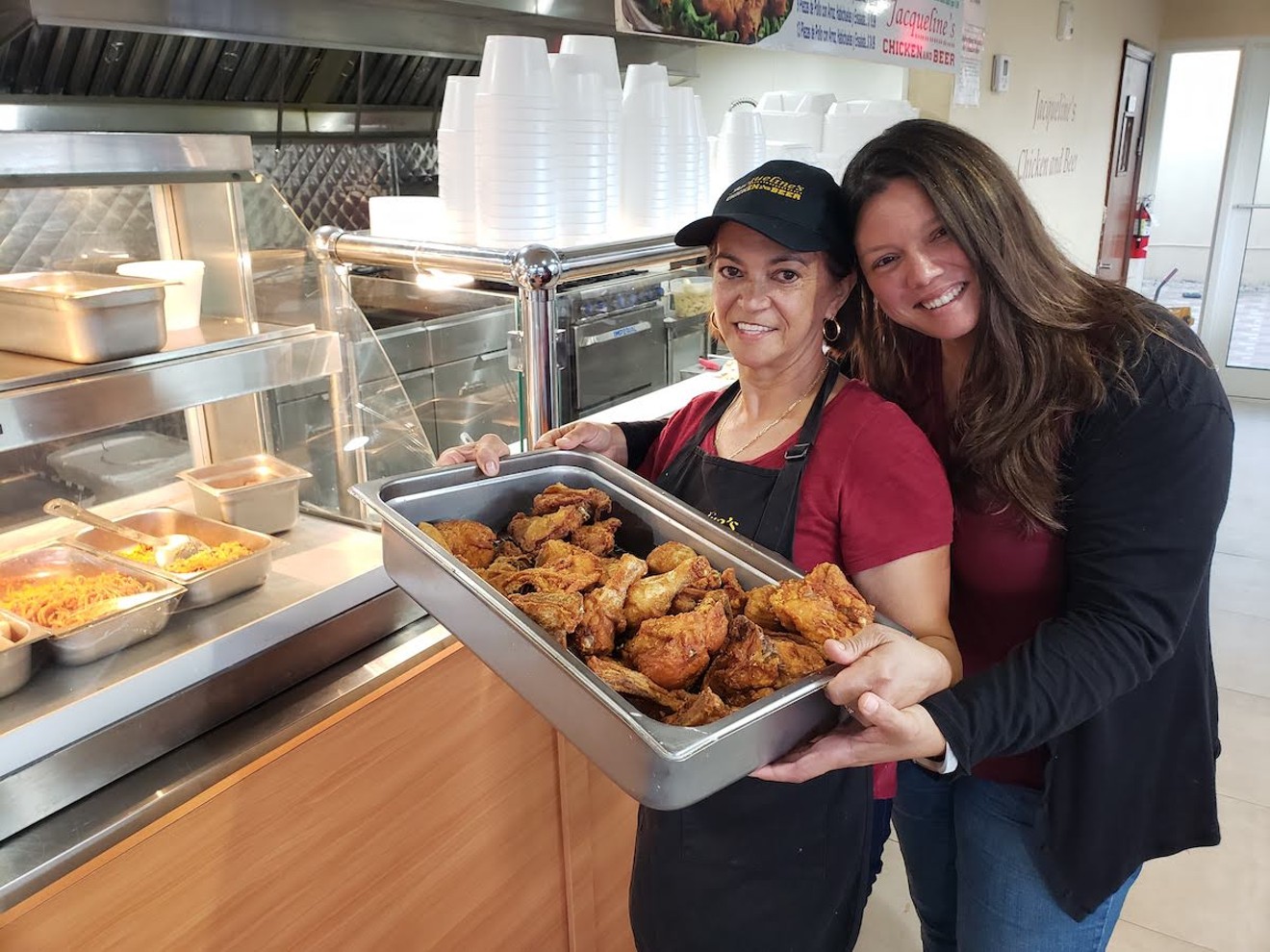 "I don't know how they do it, but they'll stay until 3 or 4 in the morning and still go to work the next day," says the club's second-generation owner Jazmeli Jackson.

Several hours later, the place is open again, but the DJ booth is empty, and the music and dancers are gone, replaced by a crew of firefighters, a group of mechanics from a nearby auto shop, and a gang of elevator repairmen. There are still a couple of Presidente bottles, but now, during the lunch hour, they're used to wash down bowls of braised fatty goat ($12) seasoned with oregano, splashed with vinegar, and served alongside heaps of mashed plantain mangu topped with crisped slugs of longaniza ($9), a fermented Dominican sausage rife with fat and fragrant with sour orange, cilantro, garlic, and chilies.

Tipico Dominicano, now in its third decade, was started by Jackson's father, Luis de la Cruz, in the late '80s as a social club for newly arrived Dominicans fleeing economic hardship on the island of Hispaniola.

"He and his friends would gather here to play dominoes, to talk; he wanted to create a kind of community place that would welcome anyone," Jackson says. He began serving food to help hold down all the beer, and soon after, dancing became the natural progression.

When it first became popular, Tipico was indicative of a neighborhood in flux, and, recently, the area seems to be again poised for a drastic makeover. Developers and investors looking for the next great deal are turning away from Wynwood and its rising prices and looking toward this vibrant yet downtrodden area bordered by I-95 and NW 27th Avenue to the east and west, and the Miami River and 112 Expressway to the south and north.

Yet unlike the now fully gentrified Design District and Wynwood, which had been mostly composed of homes and commercial businesses, Allapattah boasts a bustling street and retail life. Take a walk along NW 20th Street on a Saturday afternoon and you'll find hundreds of people browsing dozens of clothing shops. The area is stuffed with a spectacular array of Dominican, Central American, and Haitian eateries serving a vibrant blend of food that ranges from steak-and-bean-stuffed breakfast baleadas ($4.95) and the coconut crab soup sopa de jaiba ($11.95) at El Ceibeño (2795 NW 17th Ave., Miami; 305-634-0402) to some of the city's crunchiest fried chicken, matched only by the offerings at Little Haiti's Pack Supermarket, at Jacqueline's Chicken & Beer (1971 NW 17th Ave., Miami; 305-456-7980).

"Activists are afraid this will become another Midtown, another Wynwood."

Yet some of these restaurants might fall victim to development as speculators buy up land in what could be another wholesale face-lift.

Last month, a New York hedge fund manager paid near $8 million for a bank building on NW 36th Street that sits inside an "Opportunity Zone." The federal program gives investors and developers the ability to defer and possibly avoid paying capital gains taxes for at least five years by investing in economically distressed areas nationwide. There are more than 8,700 designated zones throughout the United States. In April, the City of Miami gave final approval to convert a 1.36 million-square-foot property into a multipurpose complex, designed by star architect Bjarke Ingels, at the Miami Produce Center, once a vibrant market where the city's restaurants shopped.

"Activists are afraid this will become another Midtown, another Wynwood, because so many of these small business don't own their buildings and could be at the mercy of their landlords," says Tipico Dominicano's Jackson, who owns her building. "It would be unfortunate because those businesses are what makes this neighborhood special and unique." 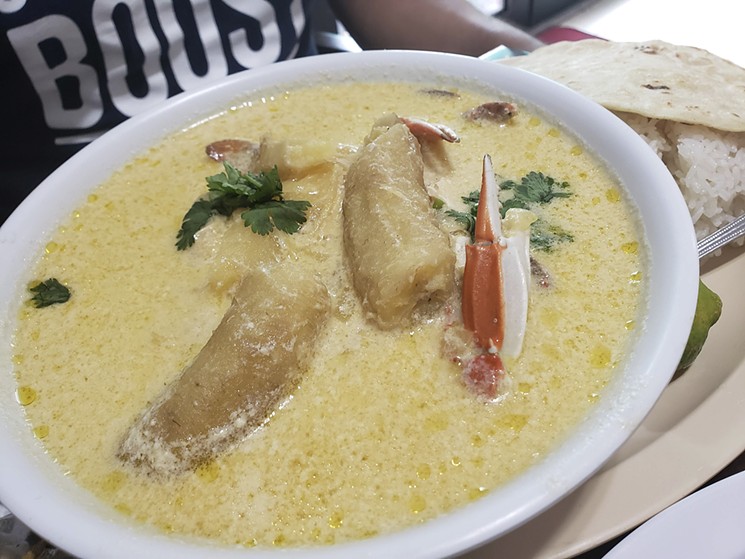 "We want to make sure that the developers are using equitable practices and making sure that communities are not being displaced because the market is basically driving people and businesses out," said community activist Mileyka Burgos. "What we need are policies that make the resiliency of a community something to acknowledge beforehand, not a negotiation during permitting."

Like so many neighborhoods in Miami, this one has been shaped multiple times. The name "Allapattah" comes from the Seminole word meaning "alligator." At one time, it was one of the richest agricultural tracts in the county, where white farmers from other parts of the South flocked to grow everything from beans and corn to citrus and tomatoes, according to HistoryMiami's Paul George. "You could still find elements of that redneck Deep South even into the 1980s," the local historian says.

The real-estate boom of the '20s brought the first specters of development to the area around Miami Jackson Senior High School, which expanded in 1926 with the construction of a three-story building.

The area remained mostly the same until the '50s and '60s, when the expansion of I-95 fractured nearby Overtown and pushed many of its residents into the neighboring Allapattah. The Dominican influx came a couple of decades later, in the '80s, when economic struggles spawned by falling sugar production caused many to leave the island. That inflow is what helped Allapattah earn its nickname, "Little Santo Domingo."

Not far from El Tipico stands Jacqueline's Chicken & Beer. Though it opened only a little over a year ago, it's become a fast favorite, particularly in the mornings, when workers from across the area pull in and honk, summoning manager Francisco Rodriguez, who delivers containers packed with mangu, eggs, and fried bologna. Yet the afternoon is when the place really shines, particularly thanks to its skin-on fried chicken that despite bearing little coating is unbelievably crunchy and golden while maintaining a juicy interior. The Peña family, which owns this location and has a hand in a number of them across the nation, established itself in Massachusetts after matriarch Maria Peña, leaving her family behind, relocated there in the '80s and found work in a department store's cafeteria.

"During that time, she realized she wanted to do something for herself and help her family open their first business," her daughter Jacqueline says. "She named it after me as, I guess, a way to bring me with her."

Eventually, the businesses grew enough that Maria was able to use the restaurants to train her family as they migrated north from the island looking for a better life. "Considering our background as poor immigrants, she wanted to expand to Miami to bring work opportunities for family members and friends as well as to bring her vision, which is serving homemade food using natural ingredients offered at a low cost for our working community members," Jacqueline explains.

Tipico Dominicano is also a family affair, and that close-knit relationship extends to the customers, embraces them, and creates something more than a restaurant, a nightclub, or a spot for a quick lunch.

"My little sister helps every now and then, the DJ is my cousin, the main waitress is my cousin, and my aunt works the door," Jackson, the owner, says. Such businesses are the ones that make Allapattah unique and are considered most at risk.

"I get the goose bumps because the biggest loss Allapattah will have is losing those businesses that have become the essence of the neighborhood," Burgos, the activist, says. And although those like Jackson and the Peñas, who own their buildings, seem to be safe, it's those who are renting space that are at the highest risk of being pushed out and forgotten as development marches the neighborhood through its next evolution.