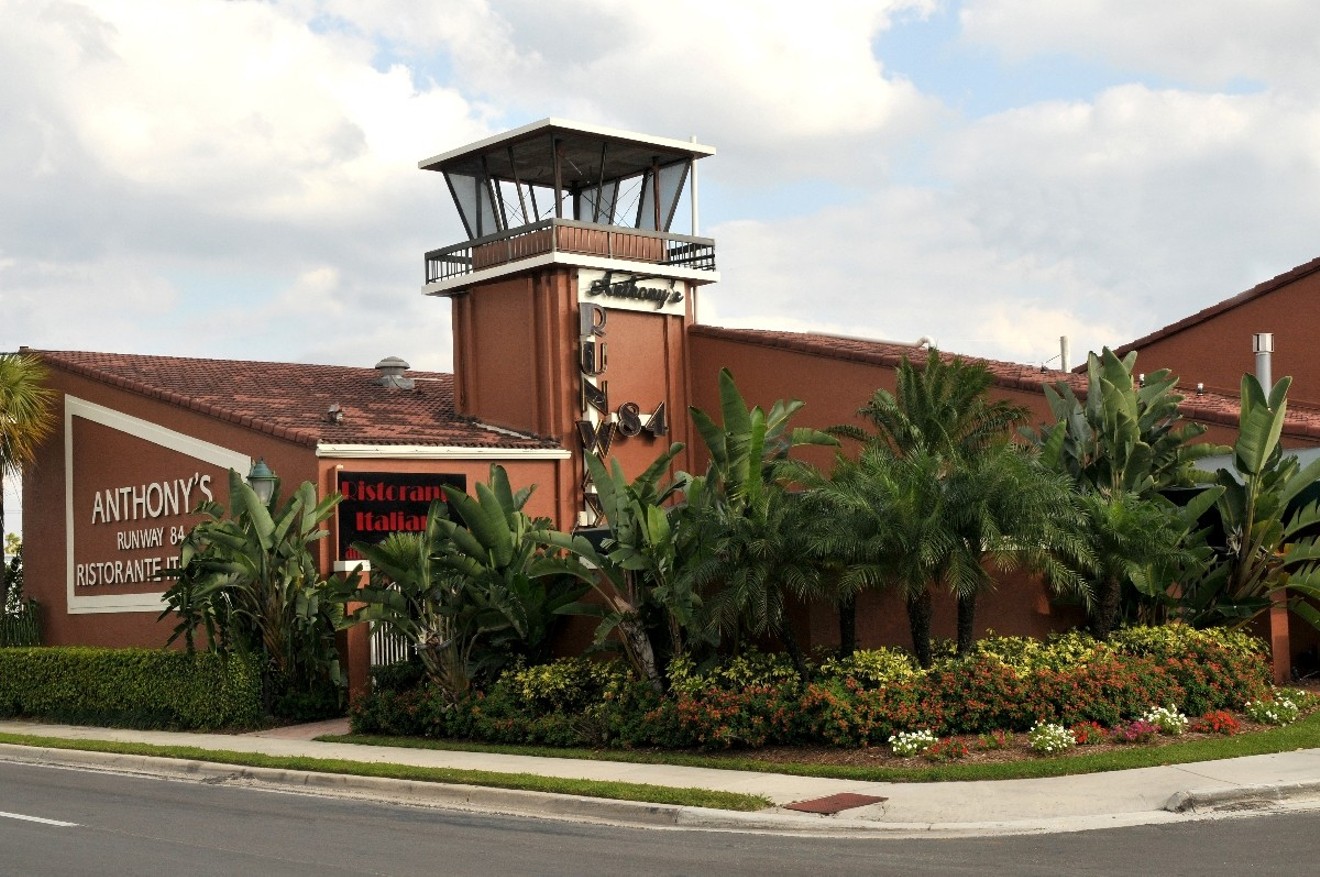 Anthony's is closing for an extensive renovation. Photo courtesy of Anthony's Runway 84
There are many places in which to get a good meal with great ambiance in South Florida. But for a restaurant to be truly memorable, it has to have an undefinable "it" factor that resonates to your core, possibly tinged with a touch of nostalgia. Restaurants like Joe's Stone Crab and Versailles are good  examples.

In Fort Lauderdale, there's Anthony's Runway 84. Anthony Bruno's aviation-themed restaurant has been serving up red-sauce classics for 40 years, becoming a haven for New York expats who, lured by Florida's sunny days and lack of state taxes, live here but are still homesick for their favorite Italian restaurants.

For 40 years, patrons have enjoyed martinis at the bar, where a large-scale replica of an airplane serves as the focal point. Sit in a booth and you can gaze out at the Fort Lauderdale skyline from "cockpit windows," making the entire room feel as though you're in a jumbo jet — maybe headed back to JFK. In the background, Frank Sinatra and Dean Martin croon as waiters reel off the specials: an oversize pork chop, say, or fresh snapper.

More than the unique surroundings or the hearty dishes, though, Anthony's has always been about people like Cindy, the bartender who makes your martini extra dirty, or Vincenzo, the maître'd with bedazzled gold spectacles and slicked-back black hair who remembers you and every other customer. And those customers are loyal — celebrating birthdays and anniversaries or just sitting at the bar on Thursdays for the weekly Meatballs and Martinis party.

This Thursday, May 12, Anthony's will host Meatballs and Martinis, then close for a revamp. When it opens sometime in the fall, the airplane memorabilia and the cockpit windows will be gone. The restaurant will be transformed into a supper club with Rat Pack vibes. It will also have brought on new partners: Bruno has partnered with Pat Marzano (from Bruno's other venture, Anthony’s Coal Fired Pizza) and Marc Falsetto of Handcrafted Hospitality (Tacocraft, Pizzacraft) on the renovation, which will cost about $3 million.

So far, news of the renovation has met with mixed reviews, admits Bruno, who concedes that his own son was angry at first. "It's about 50-50," he says of the ratio of positive to negative reactions.

Word of the impending changes hit me hard. Though I've been in South Florida for almost two decades, I'm a native New Yorker.  Walking into Anthony's and listening to Sinatra or the Four Seasons as I sip a vodka martini with blue cheese-stuffed olives salved my soul when I was a little too homesick. Would this oasis for displaced New Yorkers become something slick?

Partner Marc Falsetto assures me it will not.

"This isn’t about destroying what was. It’s about bringing Runway into the next era with refreshed design and aesthetics. We’re keeping all of the great things that made this place an institution. Guests will still get the same great food and service that they’ve always received.”

Bruno adds that the menu will not change. "I'm keeping all the chefs and they only know how to make one thing," he quips.

The staff isn't going anywhere either. "Everyone is returning," Falsetto says. "We are placing all front-of-house and back-of-house employees in our restaurants. All salaried employees will continue to get paid during the closure. Anthony's Runway 84 is a family, and keeping our family together during the renovations is the only option we have been discussing."

Radio personality Paul Castronovo says he's bullish on the renovation because he trusts the people in charge to keep Anthony's alive. "I've been going for 30 years. I'm family when I go there. I feel like I'm on the set of The Godfather. It brings out the New York Italian in me."

Castronovo, who says he regularly brings visiting celebrities to the restaurant ("The comics love it," he adds), has dined at Anthony's with Bobby Slayton, Lisa Lampanelli, and Ralphie May, to name a few. Castronovo recalls one evening while sitting at the bar, he overheard a woman bragging about her Hermès Birkin bag and its $35,000 price tag. "She was showing the purse and a waiter comes by and a plate of scungilli slides off his tray right into her purse. We're laughing and she's freaking out."

Castronovo also remembers when Tony Sirico, the actor who played Paulie Walnuts on The Sopranos, was in the house. "It was like whenever that many Italians are gathered in one room, a Soprano has to appear," he says. 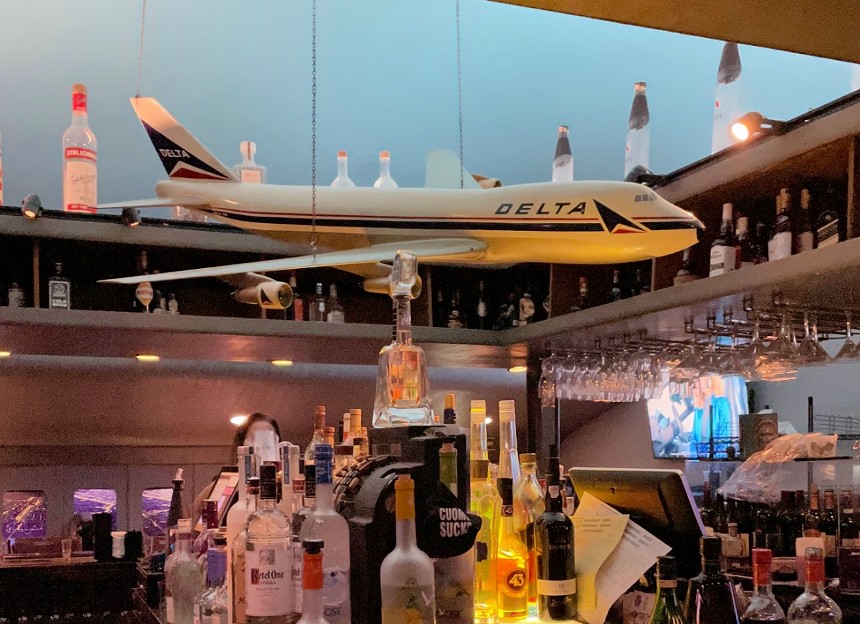 The model airplane at Anthony's Runway 84 bar
Photo by Laine Doss
Bruno has a few great stories himself. Back when smoking was allowed in the bar, the giant airplane that hangs overhead would get yellowed from the smoke. "We'd have it rewrapped every summer," he says.

Last week, I went for one last dinner before the hiatus. Sinatra was playing as we sat at the bar for a martini, made perfectly by Cindy the bartender. The food was bountiful: a plate of bread — crusty on the outside, warm and yeasty on the inside, was served with a dish of olive oil sprinkled with fresh garlic and grated cheese.  A plate of plump mussels in marinara served complimentary with dinner, arrived next. Then came the cold antipasti filled with anchovies, piquant cheese, and salumi before the rigatoni with sausage and broccoli rabe. All the portions are oversized, guaranteeing you'll be having chicken parm or linguini for lunch the next day.

From the bread to the espresso, the meal was the perfect model of what dinner at an upscale Italian restaurant should be. Artie Buco, the owner of Tony Soprano's favorite restaurant, Vesuvio's, couldn't have prepared a better plate of pasta. Bruno is right: After 40 years, his kitchen staff has perfected Italian red-sauce dishes.

I haven't seen renderings of the restaurant's coming reincarnation, but Bruno tells me to envision the scene in Goodfellas when Henry Hill takes Karen to the Copacabana. "Without giving anything away, that's the feeling we're going for," he says.

Then, as if to reassure me one last time, he sits down at the bar. As he turns to face me, his pinky ring catches the light. "I think what everyone really loves about Anthony's is that it has soul. That's going nowhere. It's going to be the same people. The same food. Even the same Billy Joel and Sinatra. I would have to be a fool to change that."

If you want to eat at the old Anthony's one last time, you have until Thursday, May 12, to get your chicken parm fix.

Anthony's Runway 84. 330 W. State Rd. 84, Fort Lauderdale; 954-467-8484; runway-84.com.
KEEP MIAMI NEW TIMES FREE... Since we started Miami New Times, it has been defined as the free, independent voice of Miami, and we'd like to keep it that way. With local media under siege, it's more important than ever for us to rally support behind funding our local journalism. You can help by participating in our "I Support" program, allowing us to keep offering readers access to our incisive coverage of local news, food and culture with no paywalls.
Make a one-time donation today for as little as $1.